BACK TO ALL NEWS
Currently reading: Definitive Elemental RP1 sports car in action at Goodwood
UP NEXT
Exclusive: Aston Martin seeks funds to safeguard its future

Having improved "almost every nut and bolt", the British firm has built the first full production version of its lightweight sports car, the RP1
Open gallery
Close

The definitive version of the Elemental RP1, the new British sports car from the Hampshire-based start-up company, has made its debut at the Goodwood Festival of Speed.

The mid-engined, rear-wheel-drive car – dubbed ‘pre-production one’ and being built to full customer specification – is significantly changed compared with the prototype tested by Autocar last summer.

According to Elemental’s engineers, “almost every nut and bolt” on the £92,700 vehicle has been re-engineered, replaced or improved following test sessions and feedback from potential customers. 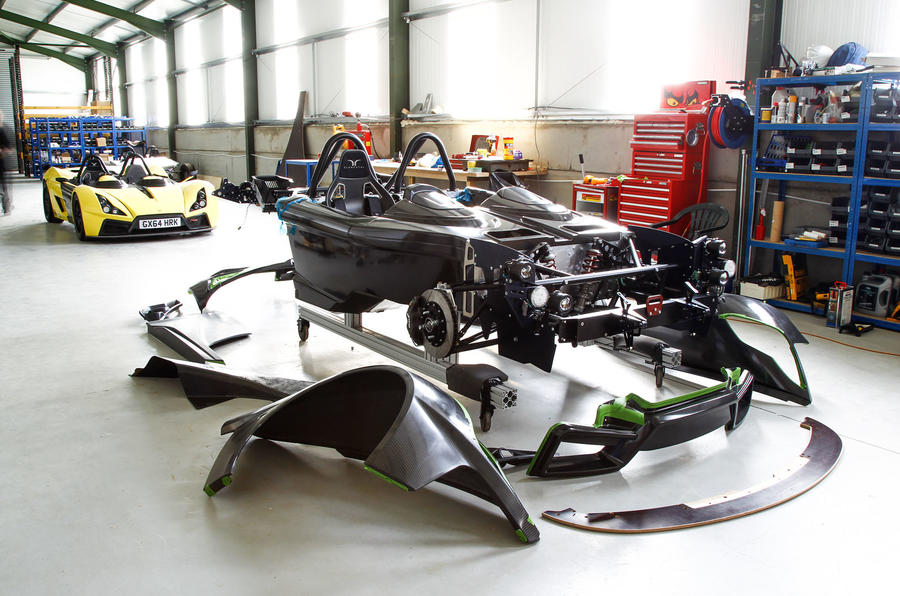 External visual changes to the Elemental RP1 production car are subtle: the rear section is slightly lower to improve airflow and enhance rearward visibility, the aerodynamics have been tweaked, with larger side vents now incorporated into the bodywork behind the cabin to improve airflow to the engine, and further work has been done on the underfloor airflow.

“It’s been an exercise to improve the car, reduce the weight, increase the stiffness and the car’s adjustability,” said Hall. “We're very comfortable that the production car will be considerably more enjoyable to drive. The whole package is stiffer by about 30% - that’s the main area where I think people are going to notice the difference.”

Aerodynamics expert Fowler used computational fluid dynamics software to refine the body shell shapes and enhance the aerodynamic properties of the underfloor, including the front and rear diffusers and completely sealing off the car's underside to enhance airflow.

Fowler said: “We were very happy with what we had from the start, but there were one or two areas that didn’t really work, which were easily corrected. The whole underside of the car has been developed as a single entity effectively, rather than just put on a front splitter, rear wing and simple diffuser. We tried not to put a rear wing on this car - that would have been an easy win but also would have increased drag and we’re trying to keep that as low as possible.

“Using the underfloor to enhance the aerodynamics obviously reduces drag as well. Our front splitter is a fairly simple [marine plywood] plank but we’re getting a lot of downforce from it. So there is loads of scope to actually develop the front splitter and give it a special profile to produce serious downforce, which we can balance off at the rear.

“We spent as much time developing the diffuser as we did getting the shape of the bodywork. It’s made using a proper race car philosophy, of sealing off the bottom surface of the car. The floor acts as an aerodynamic device, but it also protects the carbonfibre tub as well.” 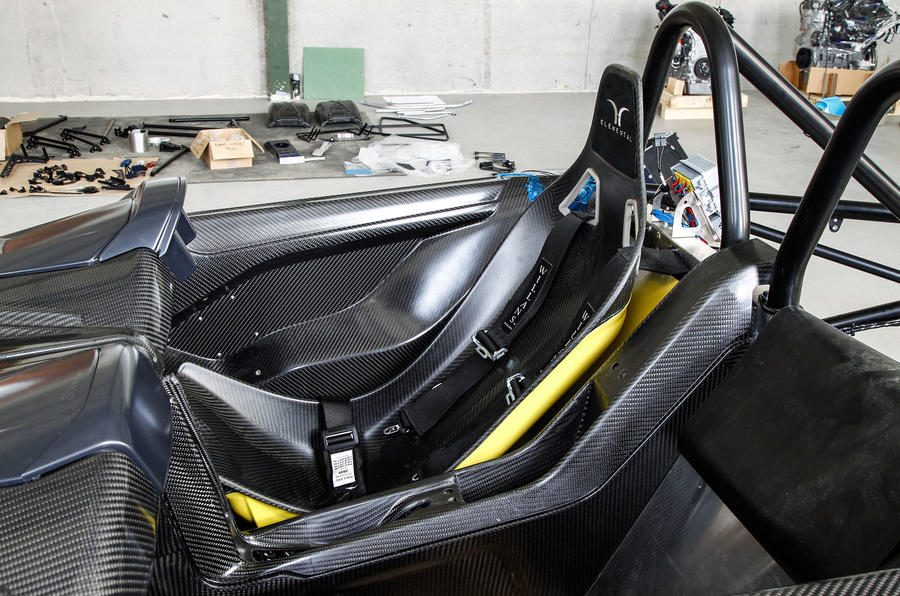 At the heart of the car is a 68kg carbonfibre tub, built to a higher standard than that of the prototype. For its composite work, Elemental has partnered with a Portuguese-based specialist called Optimal Structural Solutions. The sides of the tub have been made thinner to improve occupant space, with extra plies of carbonfibre added to the structure to retain the same stiffness as the thicker prototype passenger structure.

Read more about how the Elemental RP1 was born

“When we let potential customers sit in the car at Goodwood last year, some very tall people struggled for arm and shoulder room,” said Hall. “There is now considerably more room, and we’ve also dropped the floor and the seats to guarantee that someone 6ft 6in tall can fit.”

Extra weight has been moved from the rear right to the front left of the car, where Elemental’s engineers were struggling when they were counterbalancing the car.

Additionally, the brake disc size has gone up from 280mm to 304mm, and the rear wheel size has increased to 18in from 17in to improve grip and stability - a change that has also given the production car a more aggressive stance compared with its forebear.

Early cars will be fitted with the 2.0-litre Ford Ecoboost unit, mounted longitudinally and driving the rear wheels through a six-speed Hewland gearbox that’s affixed behind it. Power in the most extreme of five switchable engine map settings is in excess of 330bhp. Other engines – including a 1.0-litre Ecoboost – still feature in Elemental’s plans, but so far the development has focused on the 2.0-litre. 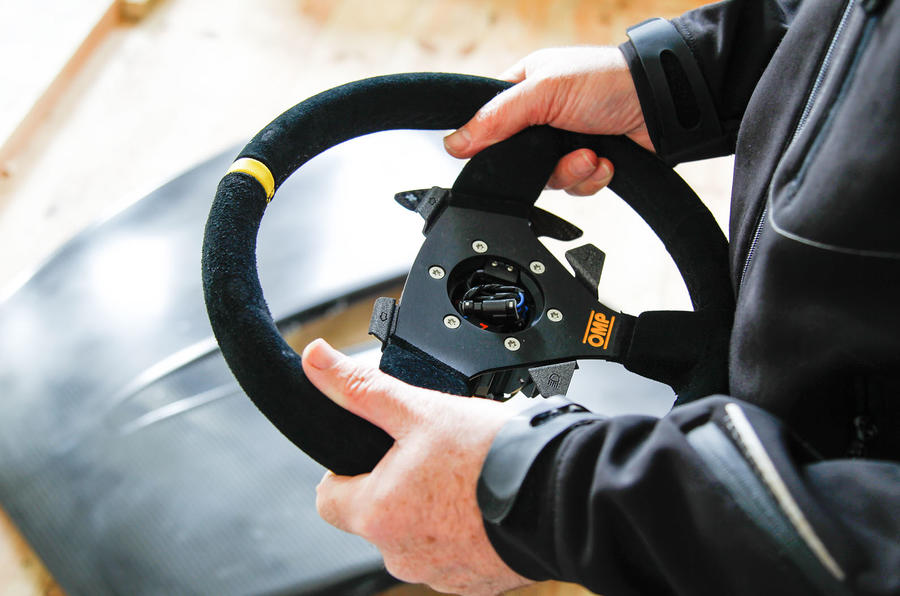 A new central control panel is an indication of Elemental’s level of detail. Company founder John Begley was inspired by the controls on photocopiers. The thin vertical panel features a slot for an RFID (Radio Frequency Identification) key, a starter button, switches for the lights, bonnet and luggage space release and – most interesting of all – the controls for the adjustable engine map settings.

The driver can switch from ‘Road 1’, the most benign setting for the engine power and traction control, through to ‘Race 2’, the most extreme set-up. Moving to any of the track settings also lowers the car’s ride height. In time, owners will be able to have the engine map settings configured to their own preferences as part of Elemental’s aim of making each car bespoke.

The production steering wheel assembly retains the paddle shifters to operate the six-speed Hewland sequential gearbox, but now also features four buttons - two either side of the boss - to work the indicators, lights and horn. The idea is that the driver rarely needs to remove a hand from the steering wheel.

A host of further detail changes have been made to the production-specification machine - even down the filler cap for the front-mounted fuel tank, which is now made bespoke rather than being bought-in from a supplier.

In its mission to make the RP1 the lightest and strongest car in its class, Elemental is now working on a new design of wheelarch together with global thread manufacturer Coats Industrial and Witney-based Shape Machining on a composite manufacturing process.

The process features a woven carbonfibre and nylon composite material that are woven together into a yarn then pressed into the required shape using a machine mould.

The part-assembled car featured in our exclusive images, taken at Elemental’s new premises in Hambledon, Hampshire, will tackle the hillclimb across all three days of the Goodwood Festival of Speed on 24-26 June. A second example will be built up for static display at the event.

A complete car build is said to take just two days and the factory has an anticipated capacity of about 40 cars per year. The first two production cars that will roll out of the factory have already been sold.