BACK TO ALL OPINION BLOGS
Currently reading: Driving the Skoda Favorit, Felicia and Octavia Mk1
UP NEXT
Remembering Colin McRae, 25 years after he became Britain’s first WRC champ

At the recent 25th anniversary of Skoda’s merger with the Volkswagen Group, the Czechs decided to roll out three decades of Skoda vehicles for journalists to try. It was arguably a brave move, as the older models were clearly everyday working vehicles, with high mileages.

Most popular among the assembled hacks were the three examples of the 1987 Favorit. I managed to get hold of the keys for the Favorit estate, more correctly known as the Forman.

Development of the Favorit was, in theory, overseen by the Czech communist government, so it must have been something of bitter pill for state-owned Skoda to have to go to Western engineering consultants for help.

Italian style house Bertone was heavily involved in the design, though Skoda developed its own modern monocoque body assembly. However, there was almost no effort put in on modern safety standards - as the car’s sub-900kg weight reveals.

Many years ago I ran into the VW engineer responsible for updating the Favorit. I asked him what he had done to the ‘platform’. He laughed out loud: "There was no platform. Just a structure".

Even so, this is remarkable well-packaged car. It’s wide inside and the room in the rear is very impressive. I wish I could say more about the space under the hatch, but the boot lock was missing. Slamming the doors - which are so light they seem ready to bounce off the lock striker plate - demonstrates the Favorit’s featherweight construction.

The 58bhp, 1.3-litre Skoda-developed engine is tappety but reasonably willing. The long gear lever has an ever longer throw, but once the car is rolling along the bare 68lb ft of torque is not an issue. Rather like an old Renault 4, the Favorit has a very comfortable gait and is - perhaps not surprisingly - very happy on the roads on which it was born.

The interior plastics might be a disaster, and the switchgear feels very cheap and crude, but you can absolutely see why this car was so popular across central and Eastern Europe.

Driving the Felicia immediately afterwards - the VW-overseen model based on the Favorit - is a shock. Although this was a year 2000 model and had just 35,000 miles or so on the clock, it was a world away from the Favorit. Introduced in 1994, just three years after VW bought into Skoda, the Felicia feels like a thoroughly modern supermini. Indeed, the example I drove felt very contemporary indeed. Although a bare 100kgs heavier in the lightest versions, the Felicia felt as solid and well-screwed together as the Favorit felt loose and floppy. 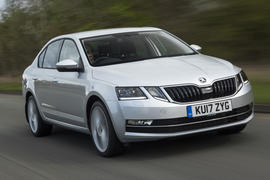 The fuel-injected engine was quiet, smooth and pulled impressively. The shift action was also unexpectedly meaty and precise. You might imagine it to be an entirely new car, but the Favorit is clearly still buried in here.

The short dash top and control locations give it away, and the key slot is still buried in the face of the dash to the left of the steering column. VW might want to run a rule over this Felicia because the interior space and luggage capacity remain impressive over such a compact footprint.

The first-generation Octavia was unveiled five years after VW bought into Skoda and was the first model based on the then-new PQ34/Golf 4 family platform. The format of original Octavia showed how Skoda was allowed to be different.

A huge rear overhang might not have been elegant, but it meant that the hatchback and estate had the kind of super-practicality that rival Golf-class models couldn’t get near.

This 155,000 mile Octavia estate was the top of the tree in its day, with all-wheel drive and a six-speed manual 'box. From nowhere, Skoda was building the kind of practical, rugged, bit modern estate that was getting lost in the first stirrings of the auto industry’s premium boom. The car I drove was well-used but clearly well-maintained. I spotted new seat belts and was impressed by the smoothness and refinement of the ride, which pointed to plenty of fresh suspension components.

Even so, this old machine had more than adequate legs for rapid motorway travel, an impressive long moon-shoot sixth ratio and unexpected refinement. Clearly, it was the sheer practicality of the first-generation Octavia that helped it gain traction in a market that then would have still associated Skoda with ancient east European products.

Driving one of the original models, it’s clear to see that the Octavia gained market traction because this car had a very clear idea of what it was about, something it retains 20 years on and why it remains by far the best-selling Skoda.

I have had two previous Skoda's, and about to acquire a 3rd after some delightful person did not stop at a roundabout and has just written off my CRV.

The first was a 1985 120LS in burnt orange. It had alloy wheels, a rev counter and nylon velour seats. It handled like a pig until I put a hundred bag of rock salt in the front boot. I then ran it for 3 years and 30,000 miles and the only thing it needed was a new alloy accelerator clip after it snapped.

My next one was a 2002 110 red eye Elegance. Absolutely phenomenal it did 35K in 15 months and only needed servicing. Only changed due to changing to a larger caravan. It was sold to be a taxi in Manchester.

In the next few weeks it will hopefully be a Superb estate.

My dad still maintains his Y

My dad still maintains his Y-reg 1.9 TDI 110 Octavia estate was the best car he ever owned. After 12 years he got the newer version with the 1.6 TDI and whilst there is more kit and the same space he doesn't like it half as much. The mpg is worse as he has to drive it harder to get the same performance as the old car.
Leslie Brook 18 April 2016

The actual Mk1 Octavia was produce in 1959
https://upload.wikimedia.org/wikipedia/commons/7/71/Skoda-Octavia-2.jpg
View all comments (10)