BACK TO ALL OPINION BLOGS
Currently reading: Could the ideal garage be a pair of Porsche 911 GT3s?
UP NEXT
New Range Rover reveal: full report from flagship's debut

Could the ideal garage be a pair of Porsche 911 GT3s?

Ideally, our man would have a manual 992 GT3 Touring for road driving and a regular GT3 with paddles for weekend track days
Share
Open gallery
Close
Share story

The emergence of what was previously, and deliciously geekily, called ‘the Touring packet’ for the Porsche 911 GT3 is one of the best things that Weissach has done for its hero sports car in recent years. We went through the paddle-shift-only controversy with the 991-generation GT3, of course; and then the return of the GT3 manual with the limited-numbers 991-gen R, which looked like a bit of a money-grab to some but, by being utterly sublime to drive, was automatically very difficult indeed to feel truly cynical about.

All was forgiven when the series-production, manual-as-standard 991 GT3 Touring came along, though. And now that it’s back, you can have exactly the 911 GT3 you want, to use precisely as it suits you, for no extra money. Who’s to argue?

Porsche company execs have previously talked about how much demand there is for a 911 GT3 without a huge rear wing. Well, now that there’s just such a car offered as an alternative to a normal GT3 right from the launch phase, we’ll see how many people really do prefer the track-car-for-the-road look that the GT3 has always traded on, and how many want something a bit more subtle. 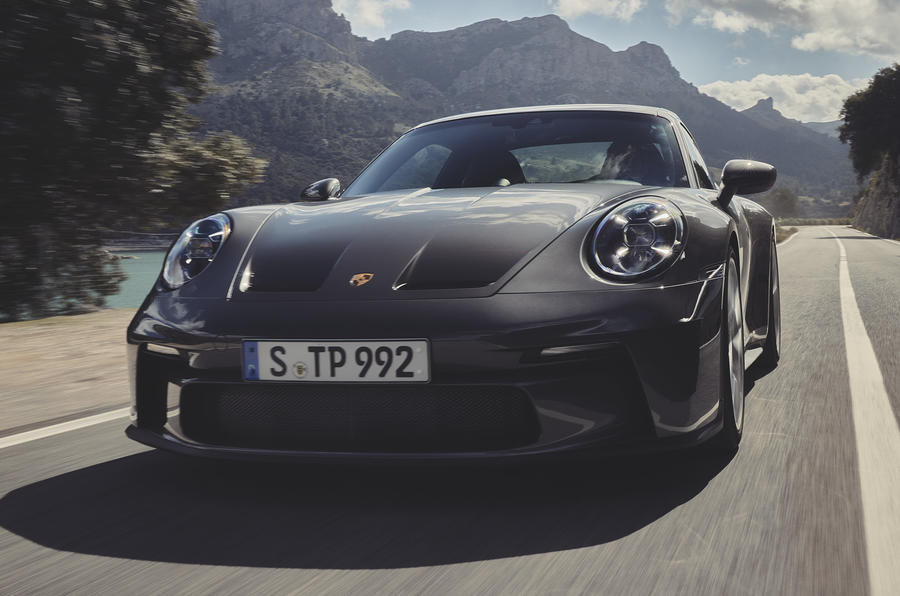 I’m a fan of the swan-neck design of the car’s new rear aerofoil, I must say; but it is undoubtedly more aggressive looking, and I can see why you might prefer to avoid it, especially if you foresee only a few opportunities for track driving in your car. To me, though, a GT3 without a rear wing is just missing something really distinguishing. Call me juvenile if you like.

The manual versus paddle shift question isn’t a straightforward one, either. If I had a Touring, it would definitely be for the extra pedal and stick shift, and the richness that adds to the driving experience on the road. But don’t forget how brilliant Weissach’s track-ready PDK gearbox has become over the years, and how much better a solution it is than you’ll find on other two-pedal track car equivalents. If you like setting a fast lap time, you’ll be quicker in a PDK without question, and I also love the declutching function it offers. Pull both paddles and then drop them again, and you can easily break traction at the car’s driven wheels and hoof the chassis around to your heart’s content. It’s a trick that the rest of the industry continues to miss, and I love it.

Basically, I think what I’m saying is that I’d have to have both: a 992-gen GT3 Touring for road driving, and a regular GT3 with paddles for weekend track days. Or maybe the latter’s a GT3 RS; I’d be open to suggestions, just as soon as I find that forgotten Picasso in the attic.

It's a dilemna I'd agree. The provision of a clutch and H-shift gearbox provides a unique experience and is very satisfying for a skilled wheelman, yet I have to admit the arangement is archaic and inherently slower and  clumsier than the seamless shift offered by paddles. Also a two pedal layout allows kart-style left foor braking with plenty of space for a left foor brace during hard cornering.

I think it's time to accept progress just as our predecessors did with synchromesh gearboxes, four wheel brakes and automatic ignition advance and retard mechanisms. But just give me the conventional manual!