Look at this new Porsche 911 GT3 on paper alone and you could be tempted – forgiven, indeed – to think we’ve been here before with Porsche. Meet the new boss, same as the old boss. Or near as makes not much difference. Bit heavier, bit more powerful, a lot more expensive. Flat six, no turbos, two pedals or three. Nothing to see here, move right along.

And what a mistake that would be. Because when you drive it, and for reasons we’ll be getting to directly, you realise it is one of the most-changed Porsche 911 GT3s of them all. The most? The improvement from first to second generation of the original 996 was undoubtedly larger, but conceptually and in the way the car now begs to be driven? Yes, I’d say so. But space is short and the changes are many, so join me for a quick charge around what is, if nothing else, the most surprising Porsche 911 GT3 I’ve driven.

The 4.0-litre engine has gained 10bhp and in power terms now precisely splits the difference between the 493bhp previous GT3 and its 513bhp GT3 RS sibling. Weight has gone up a paltry 5kg, which would have been nearer to 40kg had Porsche not gone above and beyond to keep mass under control.

It has, however, managed to save 6kg in the engine, 10kg in the exhaust system and the same amount by using a lithium ion battery. A further 4.7kg comes with thinner glass, 2.5kg using a CFRP bonnet, 3.5kg with lighter engine mounts, 1.9kg by having less sound-deadening material, and the rear deck is 0.5kg lighter. The forged alloys save 1.3kg. You can save almost as much again if get trigger happy with the options and spec ceramic brakes and seats and a roof made from CFRP. Be warned, however, that those three innocent ticks alone add more than 10% to the price of the car.

But there’s an even bigger change to the aero package, which is, I think, the first on a GT3 to generate sufficient downforce for Porsche to want to discuss in numerical detail. The new rear spoiler looks odd with its ‘swan neck’ mounts, but it’s that way because it’s the underside of the wing that does the most work, so keeping its surface clean makes more downforce.

There is, of course, a new front spoiler, but you have to jack the car up and whip off a front tyre to see how the front diffuser now manages airflow around the wheel well and can be adjusted to balance out changes of rear wing angle. With everything at max attack, it develops 385kg of downforce, some 150% more than the old GT3 in the same configuration.

That’s a big deal, but not as big as the other change you’ll see when that alloy is off the car. For there at the front is the first double-wishbone suspension unit to grace a street 911 in the 58-year history of the car. Indeed, if you want to drive another 911 with wishbones, you’ll need to spend one million bucks on a Le Mans-spec Porsche 911 RSR racer. Literally. This profound change of approach has meant the multi-link rear suspension has had to be entirely redesigned too, because otherwise the four-wheel steering system would not have worked as required. 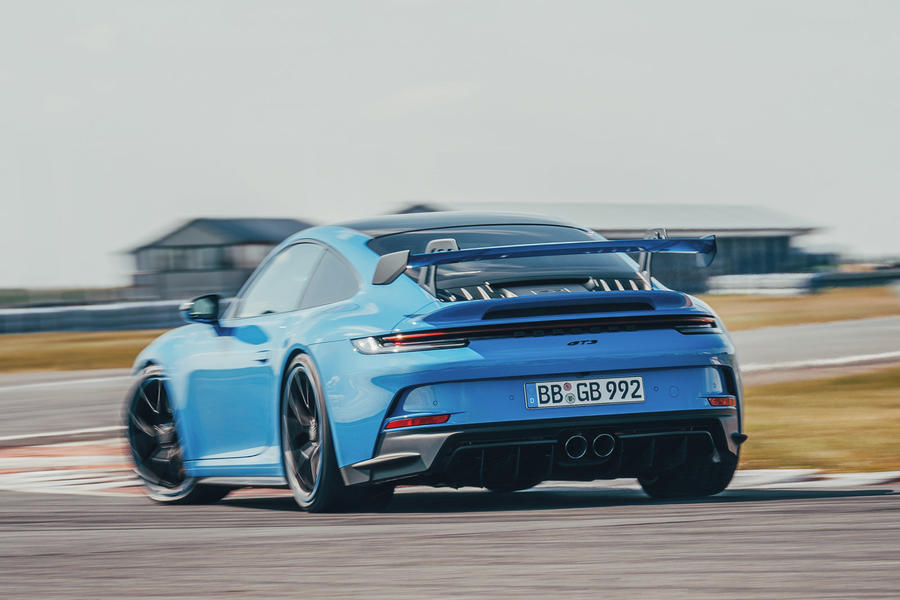 It is no exaggeration to say you’ll notice the front suspension before you’re out of the car park. Just waggle the wheel from side to side and the car responds more instantly and more precisely. It feels rose-jointed, like a racing car, largely because it is. It’s actually a little disconcerting at first, because the steering doesn’t feel like that of a 911, and it’s lighter than I’d expected. For myself, I’d dial down the assistance a touch.

And soften the ride. Mirroring a move made with the last GT3 RS, the front spring rate has doubled, and while we’re not quite comparing like with like, because that was a strut and this is a double wishbone, the GT3 is decidedly firm on the bumpy B-roads on which many British buyers will spend most of their time in the car. It’s a couple of clicks shy of being harsh, but those who want the new Touring version (which Porsche won’t confirm but everyone knows is coming) would probably prefer more street-friendly settings, especially if some of the reason for the new, higher spring rates is a need to support the body under the weight of all that downforce the Touring isn’t going to have.

The GT3 is, though, sufficiently refined for longer distances, although there is a low-rev resonance in the car, which is probably the price you pay for the thinner glass and reduced sound deadening.

But once you’re up to speed, my goodness. Here is a new level of composure and precision for the GT3. The car feels smaller because you can aim it more accurately. Grip on standard Michelin Cup 2 rubber (Cup 2Rs are now optional) is such that so long as it’s neither cold nor wet, no sane person will unstick it in public.

For that you need a track. And here the GT3 is another car entirely. It’s almost not worth mentioning the engine because it remains the work of absolute and utter screaming, shrieking genius it has always been. The PDK dual-clutch automatic gearbox is beyond serious criticism too, unless you count the shifter now looking too much like a stick. 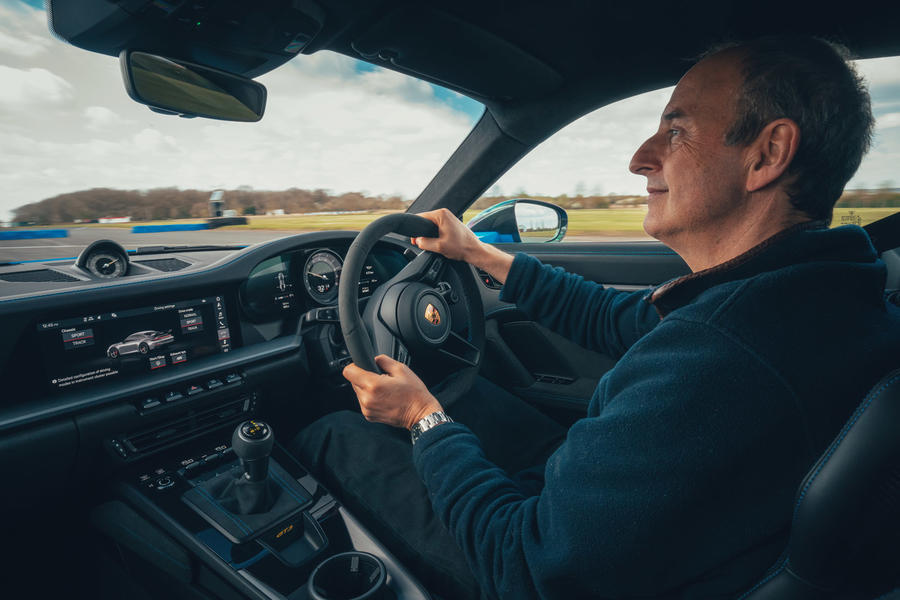 Despite it all, the downforce is not the kind to pull the drums out of your ears. Its real job is to make the car feel planted in fast corners, because that’s what brings the confidence without which no car of this potential can be enjoyed to the full. And that is precisely what it does, settling the GT3 superbly through the Bedford Autodrome’s quicker curves. But it is that front suspension that goes beyond elevating the GT3 to a new level: it changes its game entirely.

Actually, if you’re lucky enough to be familiar with the way GT3s have behaved for years, you need to change slightly the way you drive the car. Until now, even if you’re not specifically aware of it, you’ve always been managing the nose, knowing that, so long as you stay on the power, the back will pretty much look after itself. No longer. This GT3 has a monster front end: sharper, more incisive and far grippier than before. It rebalanced the car, making it far more neutral and doubtless far quicker, too. When I saw the Porsche 911 GT3 was 18 seconds quicker around the Nürburgring than the last one, I put a lot of it down to the optional Cup 2Rs it was wearing. Now I’ve driven it, it’s clear the new aero and front end played equally significant roles.

The other way in which the car has been rebalanced is that its set-up is designed more for going fast and less for messing about on the lockstops. It will still slide – and slide – but it is less of a natural state for it, a fact that will be lamented by opposite-lock jockeys and very few others. 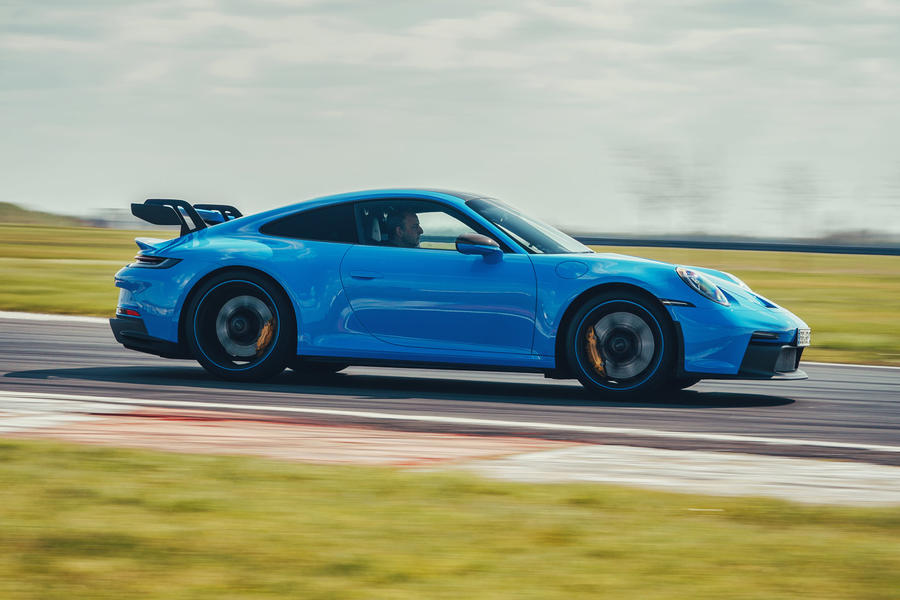 This, then, is a more grown-up kind of GT3; more of a weapon, less of a toy. Indeed, it’s not just its power output that positions it between the old GT3 and GT3 RS, but its character does, too.

This is the most track- oriented GT3 to date, a fact that will be welcomed by many but not all. And it’s £16,000 more than was the last GT3 when launched in 2017. Me? I think about what I’d rather drive for this kind of money and just start laughing. It’s not that there’s nothing, it’s that there’s nothing even close.

Which is why, despite reservations about its road behaviour and the fact I suspect I might enjoy a fractionally softer Touring version even more, it’s the full five stars from me. 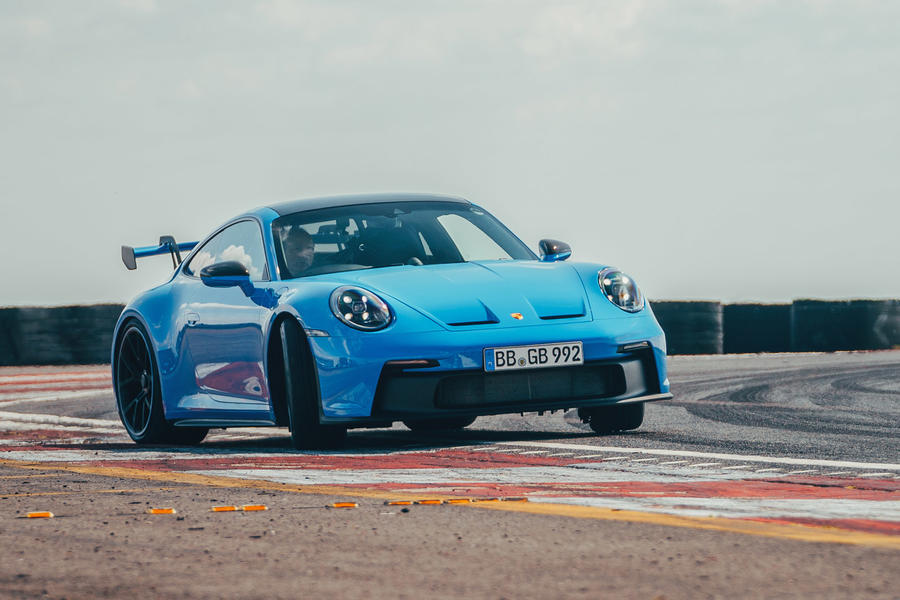 Log in or register to post comments
jason_recliner 21 April 2021
VW still being a shitty organisation? I just can't believe it!
Peter Cavellini 21 April 2021

I don't think there's any brand at this price or more for a sports car that say, yes! When would you like it?, as for the anti German crack, there's not many here, UK made, so, why is that?, why aren't all the car raving about Aston?, has Aston Martin produced a great engine recently?, does any other car maker want to use an Aston Martin engine?, and remember, I'm talking about at this price (£100,000).

Why is it the Autocar spends its time giving prases to German engineering? The UK has some of the best engineeed systems in the world - where is the praise for these?