BACK TO ALL NEWS
Currently reading: New 2021 Porsche 911 GT3 unleashed with 503bhp
UP NEXT
New Volkswagen CEO Schafer to make brand "loved" again

Porsche’s celebrated track-bred GT3 line has moved into a new generation with the long-awaited unveiling of the 992-series 911 GT3.

The new model, on sale now priced from £123,100, is described as “a highly athletic road car fit for high-performance driving on track balanced with the demands of everyday use”.

As with previous GT3 models, Porsche Motorsport has been heavily involved in the car’s development, this time in a bid to transfer “pure racing technology into a production model more consistently than ever before”.

To that end, the 992-gen GT3 features the traditionally high-revving naturally aspirated flat six in 4.0-litre form, with more power than ever. It also gets key aerodynamic and technological upgrades, the sum total of which has enabled the new model to set an impressive sub-7min lap time on the 12.9- mile Nürburgring Nordschleife. It also retains the option of a manual gearbox. 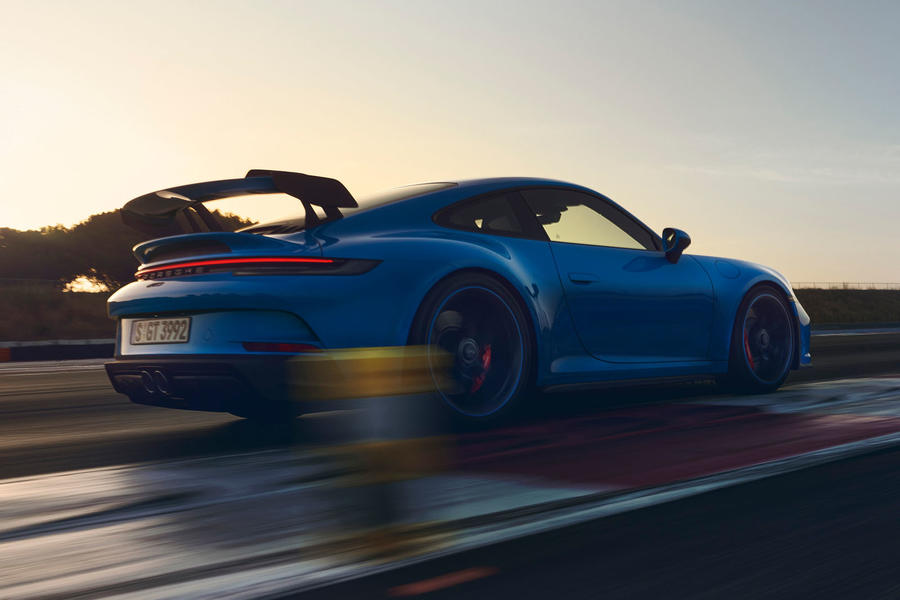 The 911 GT3 benefits from extensive exterior upgrades aimed mostly at enhancing aerodynamics and cooling. The most significant addition is a new ‘swan neck’ rear wing, adapted from that of the 911 RSR racing car. It’s manually adjustable and teamed with a prominent diffuser that can also be adjusted into a ‘Performance’ position to increase downforce. Porsche claims this mode is reserved “strictly for outings on the circuit”.

Other visible changes over a standard 992-gen Porsche 911 include a deeper front bumper with cleaner sides for further improved aero and a large central intake, plus further airflow-enhancing ‘nostril’ vents on the front bonnet. One GT3-specific optional extra is a roof made of exposed carbonfibre.

A number of customisation options via the Porsche Exclusive range are available, including carbon mirror tops, darkened headlights, a redesigned rear light cluster and Guards Red or Shark Blue paintwork for the edge of the wheel rims.

Like all 992s, the new GT3 is available solely in wide-bodied form. Dimensions have yet to be revealed, but despite the increased width and additional tech over its predecessor, the car has a claimed kerb weight of 1418kg with the six-speed manual gearbox and 1435kg with the seven-speed PDK automatic.

The use of carbonfibre-reinforced plastic (CFRP) to make the front bonnet, lightweight glass, “optimised” brake discs and forged alloy wheels are listed alongside a lighter rear seat compartment cover as reasons for the model being only around 5kg heavier than its smaller predecessor.

The 4.0-litre naturally aspirated flat six is adapted from the track-only GT3’s and is “practically unchanged” from the unit to be used in the latest GT3 Cup racing car, according to Porsche. 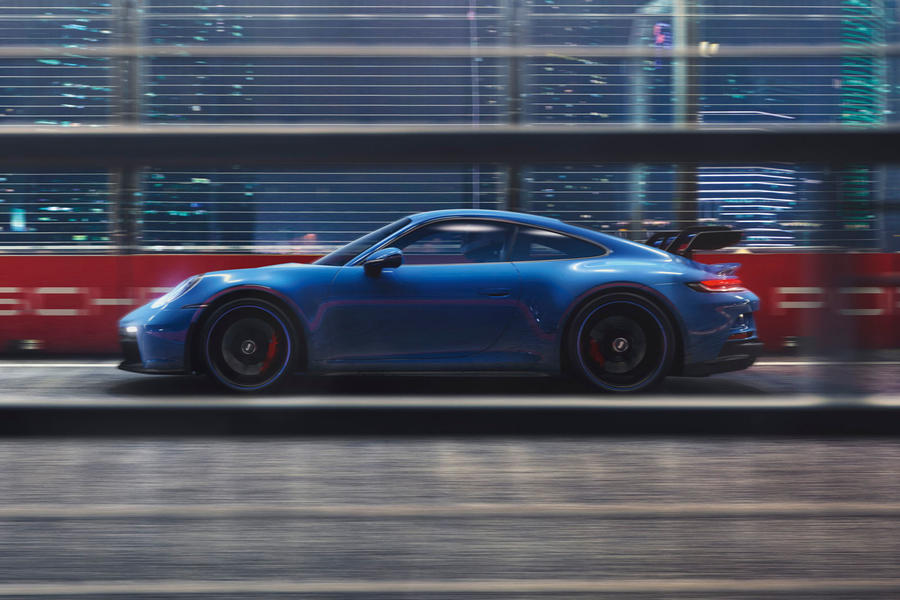 The 992 GT3 runs a substantially overhauled and race-inspired front suspension layout that uses double wishbones for the first time. The rear axle, meanwhile, is a modified multi-link set-up from the standard 992 with rear-wheel steering.

Braking is by 408mm discs on the front axle and 380mm on the rear. Porsche has yet to detail any optional carbon-ceramic system. The standard wheel choices are 20in at the front and 21in at the rear, with 255/35-profile Michelin Pilot Sport Cup 2 tyres at the front and 315/30 items at the rear. The 911 GT3 can also be had with optional, more track-focused Michelin Cup 2 R tyres.

The new 911 GT3 shares almost all of its cabin architecture with ‘lesser’ 992s, albeit with kerbweight-reducing measures such as the obligatory removal of the rear seats and reduced sound deadening. However, there is no longer the option to delete the air conditioning to reduce weight further.

Alongside liberal use of Alcantara trim, sports seats and a half roll cage, there is one significant change over the standard 992 models: the gear selector. Rather than the shift-by-wire toggle switch, the PDK-equipped GT3 features a shifter that looks almost identical to the manual gearbox’s lever.

Porsche GT boss Andreas Preuninger specified this feature because he prefers shifting via the centre console than using paddle shifts. 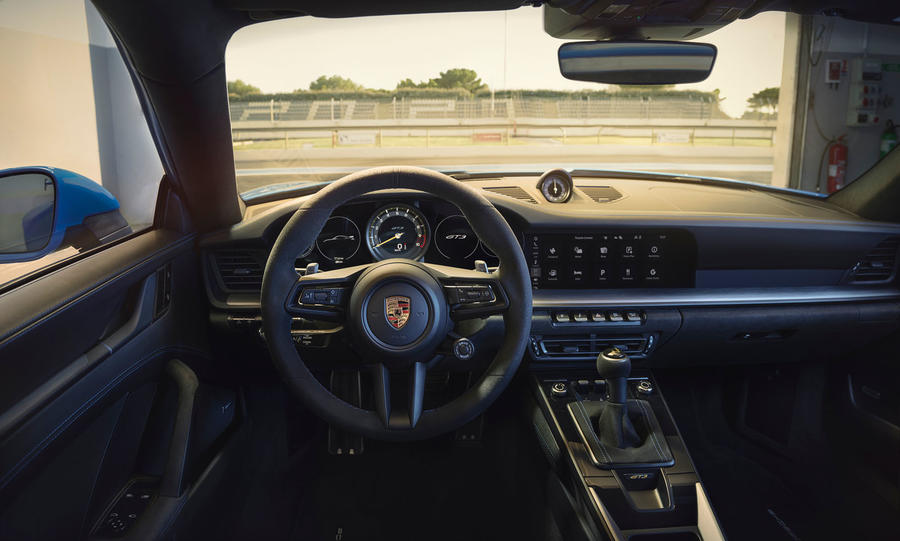 The other main new cabin feature is a ‘track screen’. When selected, this reduces the information displayed on the two digital displays located either side of the central rev counter to essential information needed on track, such as tyre pressures, oil pressure and temperature, water temperature and fuel level. A motorsport-derived shift assistant provides coloured bars to show revs on these screens, along with a shift-up light.

The first deliveries of the new 911 GT3 are tipped to begin in May, before the more road-biased Touring variant is revealed later this year. As is usual, UK customers are invited to explore their new car’s abilities at the Porsche Experience Centre in Silverstone.

Opinion: How excited should we be about the new 911 GT3?

All this for just a six figure sum?!, worth every penny?, fast enough for the main road?, if you can say yes to these, who needs HyperCard with near 300mph top speed?,and nought to sixty faster than a Starship?

Lovely....but practically 'unobtanium' even for those that can buy or lease it. Simply because if you've not bought endless rounds of Cayennes and Panams over the years - and did your OPC a favour in buying the 718 they couldn't shift  - then you've no chance.

Unless you want to 'invest' in another man's 'cast-off' with ludicrous 'overs' in a few months after launch....it just turns proper enthusiasts off. It's all just 'influencer click-bait' these days. Frankly, this stuff bores me now.

Lovely....but practically 'unobtanium' even for those that can buy or lease it. Simply because if you've not bought endless rounds of Cayennes and Panams over the years - and did your OPC a favour in buying the 718 they couldn't shift  - then you've no chance.

Unless you want to 'invest' in another man's 'cast-off' with ludicrous 'overs' in a few months after launch....it just turns proper enthusiasts off. It's all just 'influencer click-bait' these days. Frankly, this stuff bores me now.

Covid blues influencing your perspective? Its making all of us irritable. While I don't disagree with the 'unobtainium' comments, so it has always been so - thinking back to tales of my old man's woes of trying to purchase an E-Type Roadster while his brother, a frequent Jag buyer at the time, was facilitated with ease...

E- Type ?  I didn't know Autocar readers were still alive that hail from those days ;-)

I suspect whatever happened in days of yore it's fully on steroids these days. This is all post-Lehmann Bros madness - where money's cheap and assets are (consequently) over-priced. £ 130 K all in with options on a manual 992 GT3 is good value.  But when will you be seeing a price within 15% of that in the next 12 months on the used market ? Justement.  Reality rather than your imputed "irritability", alas & alack.....

eseaton 16 February 2021
Almost as nice as a 997 GT3. Except for the revolting full width rear lights, which are both dangerous and hideous.
View all comments (4)