BACK TO ALL OPINION BLOGS
Currently reading: Racing lines: F1 season headed for dramatic climax
UP NEXT
Matt Prior: Why the M500 is a new hope for Noble

Just eight points separate Max Verstappen and Sir Lewis Hamilton as they head to Jeddah for the inaugural Saudi Arabian Grand Prix, the penultimate round of the 2021 Formula 1 World Championship. The climax will follow next week, on 12 December, as one of the closest-fought and greatest duels ever seen in grand prix racing will likely play out in Abu Dhabi. Such occasions are what top-line motorsport is all about.

Both Verstappen and Hamilton deserve credit for their conduct so far this season. Yes, they collided at Silverstone and Monza, but these were acts of two hard-headed racers refusing to back down rather than malicious and intentional ‘professional fouls’. More recently at Interlagos in Brazil, Verstappen stepped over the line in his defence against a faster Hamilton. He knew exactly what he was doing when he ran his rival far beyond the tracks limits at Turn 4 and was lucky to escape sanction. But up until this point, the pair have mostly handled the intense pressure and scrutiny with calm assurance, at least in public. Hamilton carries himself with the dignity that you would expect from a 36-year-old seven-time world champion. At just 24, Verstappen still has some rough edges that he should polish off, but as a driver, he’s already near-complete. They’re both remarkable, and after years of Hamilton-andMercedes domination, it’s a treat to see them go toe to toe. 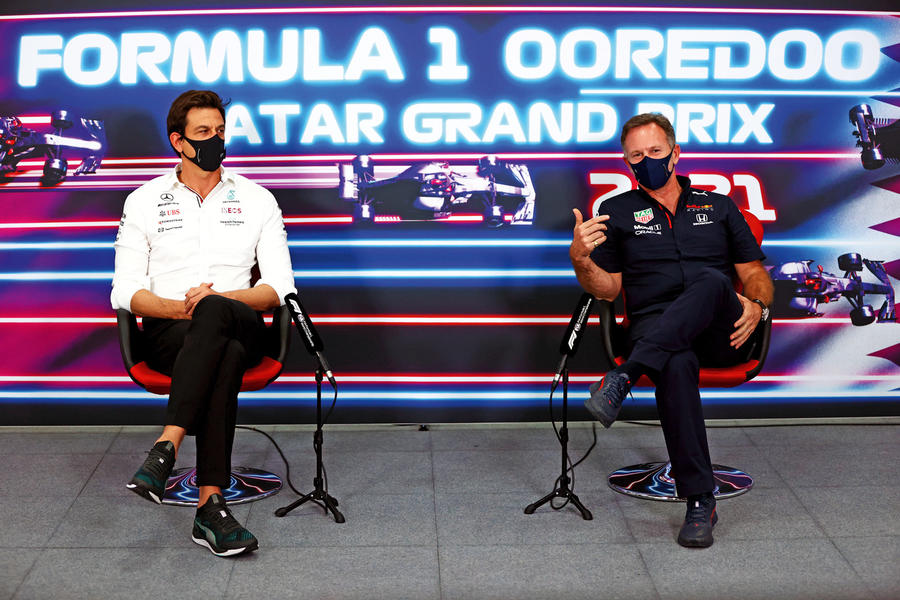 In contrast, the lack of decorum in the off-track battle between Mercedes-AMG and Red Bull Racing is becoming a bore. F1 people make no apology for their tendency to win at all costs and the ruthless, white-hot competition is all part of what makes F1 so riveting. But the public bickering, particularly Red Bull team principal Christian Horner’s use of the media to openly accuse Mercedes of cheating, has removed some of the shine from a terrific season.

Horner has every right to fight Red Bull’s corner. Of course he does. But his complaints about illegally flexing rear wings, a subject upon which his own team continues to face scrutiny, need to be taken behind closed doors. In a tense press conference at the Qatar GP, Horner and his Mercedes counterpart, Toto Wolff, took the soap opera to new levels of grubbiness in the full glare of the world’s media.

If Red Bull is so certain that Mercedes’ car will fail the FIA’s load tests, which have been revised in the wake of this row, why hasn’t it lodged an official protest?

Horner’s personal conduct fell to a new low in Qatar when he accused a “rogue marshal” of contributing confusion to Verstappen missing waved yellow flags in qualifying, which earned the Dutchman a five-place grid penalty. Marshals are volunteers without whom motorsport would be lost. They shouldn’t be above censure, but for an F1 team boss to call one out in public is unacceptable. Horner was reprimanded by the FIA, realised he had gone too far and apologised, as he should.

The gamesmanship will rage on to the chequered flag (and sadly perhaps beyond) in Abu Dhabi. But the midrace haranguing of race director Michael Masi from team managers via radio messages broadcast to the world is akin to footballers surrounding referees to sway their decision-making. All great stuff, I’m sure, for Netflix and its sensationalist Drive to Survive documentary series, which has profoundly boosted F1’s popularity. But it’s ugly, contemptible behaviour. Sportsmanship is an oldfashioned, twee concept among the F1 hardcore – yet grand prix racing is so much poorer without it.

So now will Hamilton and Verstappen show their bosses how it should be done as their duel hits boiling point? It would be so refreshing if they do. Ultimately, how this season will be remembered should be in their hands, not those of their warring chiefs.

Race for a race 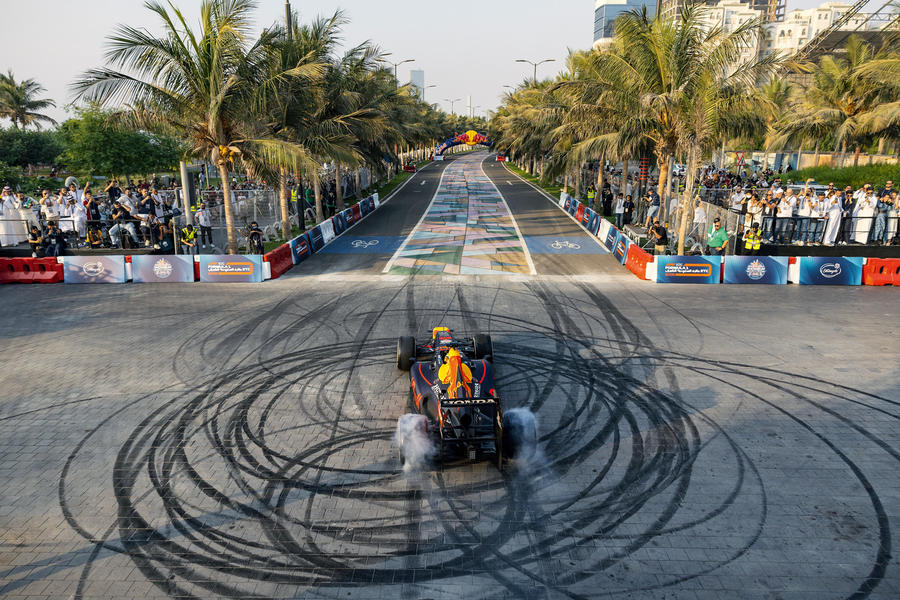 The paint might still be wet on the new Jeddah Corniche street track for the inaugural Saudi Arabian GP. I can’t say I’m surprised. I inadvertently paid a visit to the site next to the Red Sea when I travelled to the kingdom for the first ever Extreme E off-road race back in the spring. During three days of quarantine in a Jeddah hotel, we headed out for a Covid-19 test at a drive-through site that just happened to be in the middle of where the circuit now exists. It was a desolate place, not dissimilar to a neglected British seaside town, and the only sign of an F1 track was a gantry over a piece of road declaring it as such.

Back then, it seemed hard to believe the track would be ready. But given the vast wealth in this region, I assumed the Saudis would just get it done with time to spare by throwing obscene amounts of ‘resource’ at the problem. How odd that such a high-profile project has turned into a rush job. Simulations of the track suggest that it should be fast and spectacular, but the chances of major teething problems must be high in such circumstances. 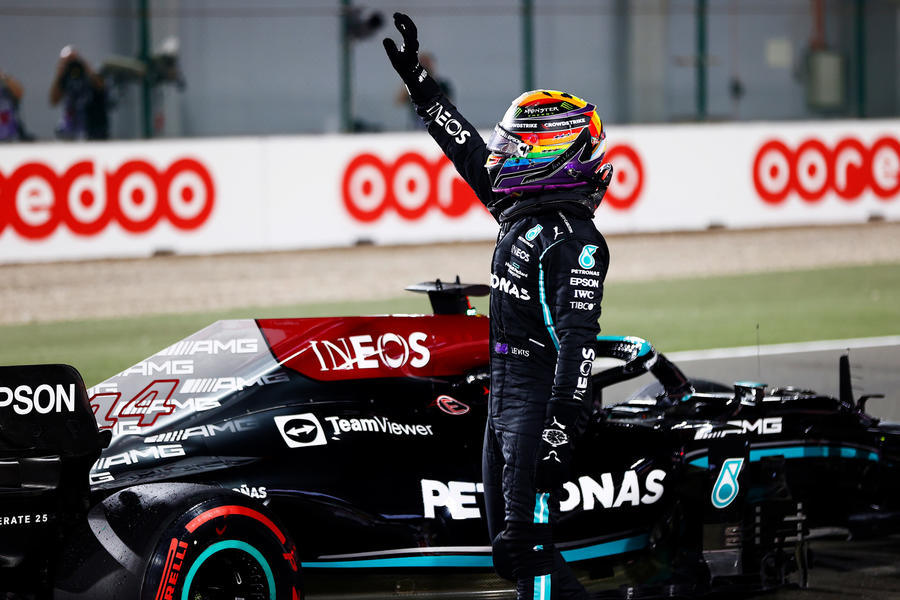 Hamilton will once again race in the rainbow crash helmet he wore to victory in Qatar. Few sportspeople around the world open themselves to the flak that the racing knight receives every day, whether it’s for his views on non-sporting matters, what he chooses to wear or how ‘lucky’ he has been to win his seven world titles. I wonder why that might be? Yet he remains resilient and true to his values. He knows there are contradictions in his participation in a sporting event held in a region with such a despicable record on human rights, but it doesn’t stop him from calling it out.

Whether he wins this eighth title or not doesn’t really matter in the grand scheme of things – but Hamilton remains the definition of a true champion for so many reasons. You don’t have to like him, but you should be proud of him.

No special mention for the Iceman?, last GP today, thought there might have been a piece about his career?

I think they want us to go to the motorsport page, doesn't warrant a main page space apparently, not thee car sport in the UK maybe?

Most contentious F1 race for decades and no article for Autocar's F1 correspondent? On holiday?