BACK TO ALL OPINION BLOGS
Currently reading: LA Auto Show is set to rely on Fiat for glamour
UP NEXT
Matt Prior: BMW iX design proves different isn't always better

LA Auto Show is set to rely on Fiat for glamour

The reborn Fiat 124 Spider looks set to dominate the headlines at the last major motor show of 2015 - but will the car live up to its billing?
Share
Close
Share story

In an era when some major car manufacturers actively steer clear of motor shows, to ensure that their bit of news benefits from some clear breathing space, the marketing bods at Fiat must be rubbing their hands with glee at the prospect of the 124 Spider dominating the Los Angeles Auto Show.

Indeed, the rebirth of the 124 Spider name, nearly 50 years since it made its debut, looks set to grab most of the headlines at the LA Convention Center - a perfect opportunity, in fact, for Fiat to really gain some traction as it tries to re-establish itself in the United States.

A relative shortage of other major launches helps the cause, of course, as LA looks set to struggle for the first time in recent years to outgun the recent Tokyo show. Jaguar has the four-wheel-drive XE, admittedly, and BMW is showing the 330e hybrid. There’s a rear-drive Lamborghini Huracan, too - but these are new variants rather than an outright model launch, let alone a convertible with a famous name. The closest rival on that score has to be Land Rover, which is showing the Evoque Convertible.

The question as Los Angeles prepares for the motor show press day is: will we be sitting here in 24 hours celebrating how great the new 124 Spider really is, or just acknowledging the fact that it’s merely better than anything else on show?

And the ironic thing is that the company at the centre of it probably doesn’t care much either way; by skilful planning or just plain dumb luck, Fiat could be centre stage - and just when it needs to be. 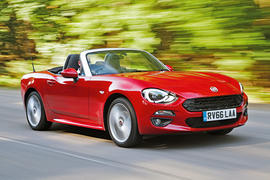