BACK TO ALL NEWS
Currently reading: 2016 Range Rover Evoque Convertible revealed
UP NEXT
New 2023 Audi A4 Avant undergoes tests in the Alps

First specs, prices and photos of new drop-top; four-wheel drive only and on sale in spring 2016, from £47,500
Open gallery
Close

Land Rover has unveiled a convertible version of the Range Rover Evoque, with the new model expected to add 10% to a production volume that currently runs at 130,000 units a year. The car has been unveiled at the Los Angeles motor show, with the west coast of the US expected to be a strong market.

Read our review of the Range Rover Evoque Convertible

The Evoque Convertible will go on sale from next spring, with prices starting at £47,500. The new model fulfils a promise made at the 2012 Geneva show, where a convertible concept was first unveiled. “We showed the Geneva concept to test the reaction of buyers and critics,” said design boss Gerry McGovern. “We viewed the model as an obvious progression, although not everyone saw it that way. But the overall reaction of the market has been very good.”

The Evoque Convertible will be offered only in higher Dynamic and Dynamic HSE trim levels, powered by either the new 178bhp 2.0-litre TD4 Ingenium diesel or the 237bhp turbocharged 2.0-litre Si4 petrol engine.

The Evoque Convertible weighs around 270kg more than its fixed-head siblings. This is due to the extra bracing needed to maintain chassis rigidity, plus the mass of the powered fabric hood mechanism (which can open or close in 21 seconds at speeds of up to 30mph) and a pop-up roll bar system that deploys if the car is in danger of inverting itself in an accident. 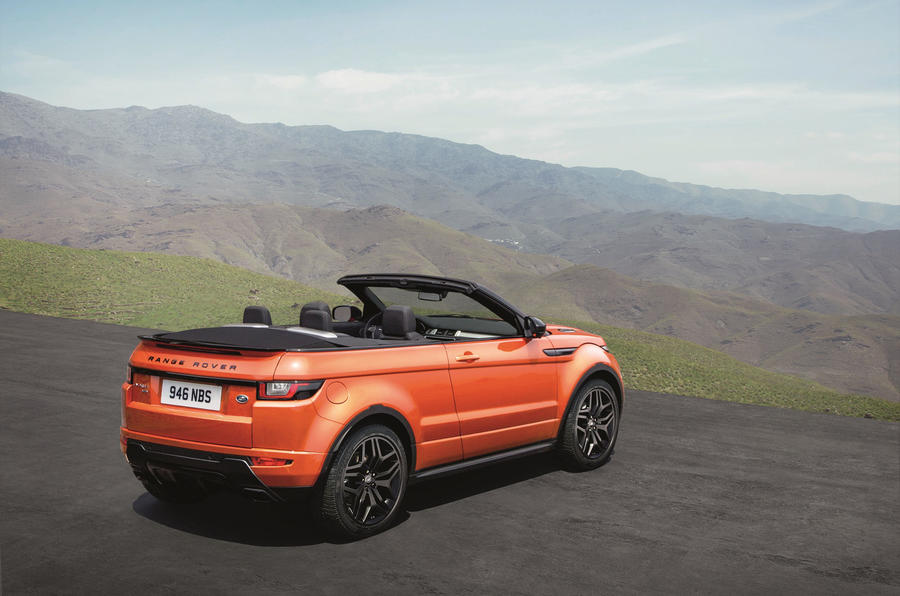 “You can’t just cut the roof off and be done with it,” said McGovern. “It takes a lot of work to get the car to a good standard of stiffness while maintaining proper package space. There were some design and engineering challenges in that.”

McGovern said the car’s  proportions are “quite different” from those of most other drop-tops, because most convertibles’ body lines are parallel to the road, whereas the Evoque’s have a strong upward rake to the rear. 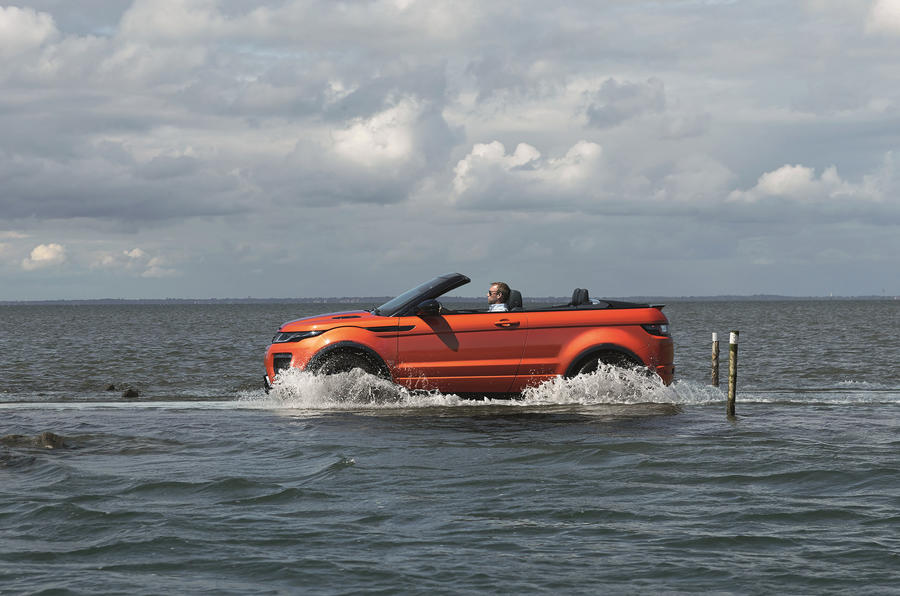 Evoque programme director Danella Bagnall said the Evoque Convertible has “substantial” reinforcement to the monocoque chassis structure near the base of the A-pillars and C-pillars, plus reinforcement of the doors to compensate for the absence of a doorframe.

Bagnall is especially pleased with the “generous” rear passenger space which, unlike most sports car-based convertibles, can comfortably accomodate two adults. The car’s high sides protect occupants against top-down buffeting and add a sense of security, she said.

All Evoque Convertibles come with four-wheel drive and have a high level of off-road ability, according to Land Rover off-road capability engineer Chris Edwards. “People were nervous about how this model would fare, and you can understand why,” he said. “When the first prototypes came out, we were pretty careful with them. We did some gentle routes at Eastnor Castle, where we test all our prototypes off road, but that didn’t tell us much about how the car could perform. We had to up the ante quite a lot to find the Convertible’s limits.”

A car for overweight orange

Marc wrote: A car for

A car for overweight orange people with special needs.

Do you have your delivery date yet?

Who will join LR and make a Ragtop Mud plugger?
Lanehogger 10 November 2015

Who will join LR and make a Ragtop Mud plugger?

Audi tried a few years ago, previewed by the Cross Cabriolet and that got panned for what it was, a convertible SUV. I doubt they'll try again, even with the advent of this Evoque. Some I know who works at JLR has said that a coupe version may be on the cards to rival the X4.

I know that I am not the target demographic

Right age group perhaps (34-49) but wrong bank account and gender. However, I like it. There is no need to have an everyday car where you have to climb down into it and whose joy is predicated on doing the exact opposite one does five days a week; a steady slog of a commute dominated by other SUVs and lorries. This can do the commute and give you a bit of fresh air. Get a used MX-5 for the weekend and you never have to deal with a tin top again!
Beastie_Boy 10 November 2015

Don't rule out the MX5 for doing the daily commute...

Right age group perhaps (34-49) but wrong bank account and gender. However, I like it. There is no need to have an everyday car where you have to climb down into it and whose joy is predicated on doing the exact opposite one does five days a week; a steady slog of a commute dominated by other SUVs and lorries. This can do the commute and give you a bit of fresh air. Get a used MX-5 for the weekend and you never have to deal with a tin top again!

My wife and I have been sharing a MX5 for ten + years now (not the same one) and cover 50 miles a day in it. I've just driven it to the French Alps, loaded with my road bike and kit, to do some cycling (passenger seat removed)... They're more practical than you think, in fact, we're hoping to pick up another this week as they current one if finally giving in to tin worm...

As for the Evoke convertible, again, not really my cup of tea but glad it exists. LR have obviously found a market for them. That said, didn't Nissan have a crack at this with the Murano drop top?