BACK TO ALL OPINION BLOGS
Currently reading: Why London is taking aim at 'blindspot lorries'
UP NEXT
Inside the industry: Why it's time for another Alfa Romeo reboot

Why London is taking aim at 'blindspot lorries'

Heavy commercial vehicles account for only 5% of road traffic yet half of cyclist fatalities, and London is taking action
Open gallery
Close

Have you heard of a blindspot lorry? No, of course you haven’t, in the same way that two decades ago you wouldn’t have heard of a gas guzzler or known what a credit crunch was. Until a few days ago, a lorry was just a lorry.

But you will have heard of them soon, because of an impending ban on them in London. Lorries that come into the capital are about to get rated on how good visibility is from the driver’s cab. Those rated zero stars – and Transport for London thinks there are 35,000 of them on the capital’s roads – will be banned from entering London by 2020. Those with fewer than three stars will be outlawed in the capital by 2024.

Why? Because heavy commercial vehicles account for only 5% of road traffic yet more than half of cyclist fatalities, and the problem is bigger in London than anywhere else. The gravest danger comes from construction lorries, made for building sites, of which there are many in London because they haven’t finished building it. These trucks ride high, with tall cabs and limited downward visibility, because they weren’t designed to be used near the vulnerable road users with which they now routinely find themselves sharing sparse road space. New rules from the office of the mayor of London, Sadiq Khan, that might necessitate bigger windows, seethrough doors or more cameras and mirrors will hopefully set London on a path to fewer road deaths. They will also change the shape of lorries travelling into the capital. And in turn, they will change the shape of lorries across the nation and beyond. 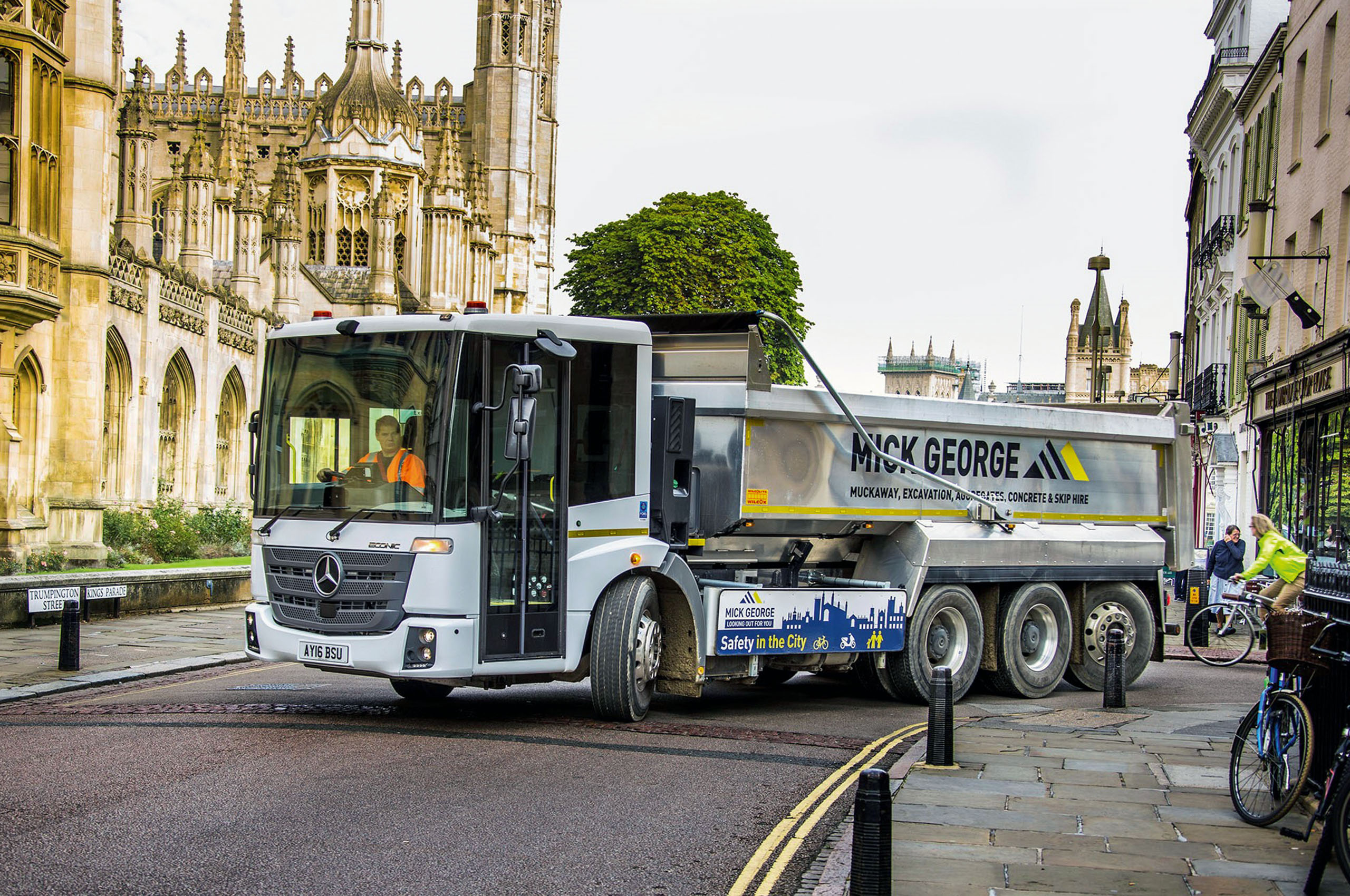 As a result, truck makers will have to be able to react quickly to local (if you can call a city with more than 10 million people in it during the day ‘local’) regulations. Because it’s London – and why would you want to miss out on a market the size of that? – they will respond.

It’s something car manufacturers will increasingly have to respond to, too, as city authorities look to improve air quality and safety and endeavour to move faster at a local level than national or international governments manage. Paris is banning cars over 20 years old, and Oxford runs the only English low-emissions zone outside London, not that it’s helping much.

If you’re a car maker looking to build and sell cars on a global scale, then, local and regional differences in legislation are another level of complexity to respond to, and respond to fast if you want to do well. Mitsubishi’s Outlander PHEV sells particularly well in the UK because our incentives make it uniquely attractive. McLaren’s 540C and the new rear-drive Ferrari GTC4 Lusso with a 3.9-litre V8 are aimed at getting the best from the Chinese market.

It strikes me that manufacturers whose model ranges are the most varied and have the most options in their locker – those who are ready to go with full electric, hybrid electric, petrol and diesel and are even getting hydrogen cars into production – will do well. The car makers who prosper will, like Darwin said, be the ones who are the most adaptable to the situations they find themselves in as, like in London, local authorities take quick action that’ll benefit all of us.

I think it's a positive step forward but we can't blame drivers of vehicles because a cyclists gets hurt, sometimes it's the cyclist's fault. As a regular visiting driver to London the most appalling road behaviour is from cyclists. There must be some education and training for cyclists and the rules of the road apply to cyclists too and must be enforced with cyclists as well as motorists. I had to pass a test to drive my car ride a motor bike drive a bus and lorry but even the cycling proficiency test is not compulsory and has fallen by the wayside. It's no wonder so many cyclists break the law when there is no testing or even training that is compulsory for cyclists.
sandy52 24 October 2016

Large trucks in our cities

I would stop all trucks from entering our cities. They would have to get a permit for moving within the central part of any large city. They would have to be suitable equipped to operate in the city, and only at certain times.
I am fed-up with having to dodge trucks in supposedly pedestrian areas, and with 44 tonne Artics parked on the damm pavement! Its time these behemoths are brought under control.
Andrew 61 22 October 2016

Sadiq Khan will also arrange for drivers to grow an extra set of eyes so they can use all the new viewing aids and drive and navigate at the same time. I would expect the next idea to be a second driver in the cab, to man the cameras and mirrors, when this one doesn't work.
Marc 24 October 2016

You make a valid point with

You make a valid point with the second person in the cab. If the accident statistics are to be believed, then you would expect a competent operator of these vehicles to implement this action, a thorough risk assessment should highlight this, particularly with operators who have actually caused previous deaths. The problem in the UK is increasing self regulation of certain industries as government bodies become increasingly stretched, an example of this is with the HSE and the construction industry. The biggest issue when it comes to minority road users such as cyclists in the UK is the utter contempt the police, courts and in particular insurance companies show them. An example of this is when any kind of accident has taken place, no matter what the cause or the outcome, the first question asked - were they wearing a helmet? If not, this is then used as a leverage to prove incompetence of the part of the cyclist regardless of the cause of the accident in the first place.
Andrew 61 24 October 2016

It may be the case in some industry's but I don't think it is a problem in the UK haulage industry. There has been a steady ramping up of regulation here for several decades. Vehicles have std servicing and MOT's as well as six week checks in between. Drivers have to pass an HGV test and then take a CPC test every five years, bigger trucks also have tachographs watching the time a driver is moving and speed, these can be inspected at any time. There are also roadside inspections sites around the UK that can pull trucks over and inspect them. At some point it becomes pointless continuing to push regulation onto one group when the other are free to do whatever they like. Unfortunately politicians rarely admit they have made a mistake on policy and will continue with their head in the sand. What was needed was a scrappage scheme for bikes in London and public transport passes handed out to encourage vulnerable bikers off one of the most crowded road systems in Europe. It's very sad that a poor political decision has led to unnecessary deaths and injuries.
Marc 24 October 2016

So what you're suggesting are

So what you're suggesting are schemes to remove the cyclists from the roads so they can be further clogged up with trucks and buses?

The point I'm getting at is not increased regulations but better risk management, there clearly is an issue and self regulation is perhaps failing to or even hiding the risk. None of the usual authorities are concerned about highlighting the issue simply because it's the cyclist that is seen as the problem, when that is incorrect.

The only thing that has led to unnecessary deaths are incompetent haulage operators.

If hauliers are involved in an accident, and found at fault, they are at risk of losing their operators licence. This is usually a big incentive to behave sensibly. As for removing cyclists so roads can be clogged up with buses I would imagine 60/70 people on a new Routemaster would take up less road space than the equivalent number on bikes. One of the problems for trucks is the road space needed for manoeuvring this has not been helped by roads having lanes reduced in width to find room for bike lanes. This has made these redesigned roads more difficult for HGV's to drive on safely. So I would not put the blame for increased accidents on Truck drivers, It is mostly the fault of local politics encouraging cyclists out onto the roads, in ever greater numbers, and leading them to think it will be perfectly safe when it plainly is not.
Marc 25 October 2016

You're not really getting

You're not really getting this are you. You have just stated that it is becoming unsafe to drive these vehicles on roads like which are found in London, therefore the operators of them need to take this into account and assess the situation, then decide whether it is safe to continue or to whether additional control measures are needed in order to operate safely. The answer is not to remove the cyclists, they are not the problem, the vehicles are.
mrtafft 21 December 2016

So What you're suggesting are

I would not suggest removing cyclists. I spent several years cycling to and from work myself. However, there is no regulation no testing and no training that is mandatory for cyclists and certainly no enforcement of the law when it comes to cyclists. Collisions involving cyclists are not always the truck/bus/car drivers fault and the sooner people realise that the better.
View all comments (23)