BACK TO ALL OPINION BLOGS
Currently reading: Great minds think alike at Rolls-Royce and Bentley
UP NEXT
Matt Prior: No Nissan Z Proto is one way to encourage EV adoption

The two super-luxury brands' CEOs arrived simultaneously in London yesterday, and both are upbeat and talking about their plans for SUVs
Share
Open gallery
Close
Share story

They may make the best mile-eaters in the world, but Britain’s luxo-limo manufacturers, Rolls-Royce and Bentley, combined yesterday to save me a journey of at least four hours and 225 miles.

By coincidence, both companies chose yesterday — and locations in Central London — to reveal their results for 2013. Such meetings provide unmissable opportunities to meet the chief executives in their most expansive mood, which means you hear lots of fascinating stuff about achievements of the past and plans for the future.

The day started with a trip to the deeply tasteful Rosewood Hotel in High Holborn for breakfast with about 20 other hacks, followed by a speech-plus-Q&A at 9am sharp by Dr Wolfgang Schreiber, the CEO.

Bentley’s message is impressive (record sales; a further 50 per cent expansion planned following the 2016 launch of the much-ballyhooed SUV) and Schreiber was in urbane and amusing form, having relaxed into the job to the extent that — if the body language of his accompanying PR director was anything to go by — he might have been a shade too helpful with our questions.

One source of amusement was his answer to my enquiry whether Bentley would show another concept of its SUV before launch, given that they had learned plenty from their first, much-panned version shown in Geneva two years ago, and had since redesigned it. “The feedback was fantastic, and we did learn a lot,” agreed Schreiber with a grin, “but we learned enough.” The message was clear: the next time we see the Bentley soft-roader it’ll be in production.

It’s about three-quarters of a mile on foot from Holborn to Berkeley Square and Rolls-Royce's rival shindig: CEO Torsten Müller-Ötvös was holding court for hacks and assorted televisual types in the dealership near the corner of Bruton Street.

The Rolls guys hadn’t known until the last minute about the prior Bentley event, and might have been pushed a bit onto the back foot had it not been for the bullish nature of their own message: Müller-Ötvös revealed record sales for the fourth year in a row, another round of hirings at Goodwood, a slightly more powerful limited-edition of the Ghost, plus fascinating and ongoing consideration (but absolutely no sign-off) on what a new Rolls SUV would be like.

Interestingly, having heard Bentley's revelations, Müller-Ötvös had nothing but praise for what Crewe was achieving, although he did make the point that while they were now into “mass market”, Rolls-Royce remained at the pinnacle of super-luxury, and its contract with its customers would always include the word “rarity”.

By 3pm I was sated, having sat in corners in various West End coffee shops with my iPad, writing up the news elements of what I’d learned. I also felt the most profound feeling of elation at the performance of these two wonderful companies, still British in the important ways, which have never had such able and far-sighted management, such easy access to technical support and investment, such a profusion of able staff — and thus such a plethora of bold and desirable new models. 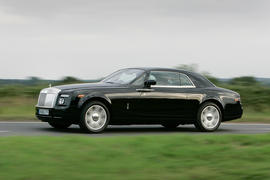 Can the Rolls-Royce Phantom Coupé offer enough extra driver appeal to make it a viable sporty alternative to the saloon or convertible?

They may be on different paths now, but for both this is truly the golden age.

Why do Journalists continue to use the expression "Soft roader"

These were farm vehicles, and for 85% of the time, my current Honda CRV would have been fit for purpose. Soft roader my a..e.

So called "Soft roaders" will comfortably perform most of the farm duties without complaint.

Now - Hauling the Rice's Trailer for your Horses or other Farm livestock can also be undertaken by the likes of VW Touareg or Q7, probably, no certainly, better than a short wheelbase Land Rover.

I will always remember driving two Charolais Bulls to the Royal Show at Stoneleigh Park, Kenilworth, and fighting a snaking Rice's Trailer during the 100 mile trip behind a SWB Land Rover series II, and the same on the way back to the farm.

A Porsche Cayenne would do a much better job.

How many people want to climb a mountain or drive across equatorial Africa - better to use a 4x4 Truck for this purpose.

A Range Rover is capable - but is not a practical cost effective utilitarian tool. For the most part an RR is the choice of idiots.

In conclusion, for the Hunting and Point-to-Point fraternity, a Bentley or Rolls Royce SUV has just a big a niche as a Range Rover.

SUV is an adequate description - "Soft roader" is an idiotic nomenclature.

Go Bentley and Rolls Royce - your entry to this market is long overdue, and ignore the naysayers who automatically decry your designs.

11 January 2014
I have to laugh at the misty-eyed recollections of the early land-rovers. They were, in the main, rubbish. Only Rover could have the temerity to sell the LWB Series 2 with a diff that they knew would blow rear axles on a whim, and sell the ("Salisbury" - basically a Dana unit) diff which didn't, at a premium. I had 3 gearboxes for my last Series IIa, the one in the wagon, the one on the bench, and the other for parts. Wonderful that the body was aluminium except that the pillocks were quite happy to run over 20 years with a design that caused corrosion between the steel for frame and the ally panels. Virtually no-one used the standard engines (2.25l 4 with 70bhp) except as a boat anchor.....

And people wondered why the Japanese 4WD's from Toyota and Nissan, despite their faults, stole the market...

Maybe if you are hauling teeny

10 January 2014
Maybe if you are hauling teeny little ponies in a Brenderup. We have warmbloods. Put two in a decent aluminium trailer with tack and feed and you are at 7000lb. Plenty of SUVs are rated to haul 7000lb but there is a huge difference between towing an old car on a flatbed and towing horses in a high-sided trailer; you need to be well under the vehicle's tow limit. There's also the matter of the brakes. I would never haul my trailer with a Cayenne or any of that ilk as it would be taking an unnecessary risk. Hence big fat diesel Chevy with LWB for stability and heavy duty back axle and brakes, rated for 15,000lb. I don't find the term soft-roader any more idiotic than estate car, crossover or SUV.

10 January 2014
Ettore Bugatti did once describe Bentleys as' building the worlds fastest trucks' This will hardly change that.

11 January 2014
I know there has been a management change in both Rolls and Bentley, I feel this is where the change is being governed by accountants, i.e. wanting more sales rather than exclusivity.

Having looked at the Rolls and Bentley photos of their potential SUV's the Bentley looks acceptable but the Rolls is bizarre in that it looks like a squashed rolls, honestly it looks gross.

I think these companies should forget what is already a crowded market (SUV) and concentrate on building fine motor cars in an exclusive market. Other companies have tried to compete in their market place and failed i.e. Maybach.

Rolls and Bentley have credibility and created a niche within their sector. If prospective owners wish to go SUVing they can always purchase a Range Rover or Mercedes G wagon and Spec them to the hilt. I think it demeans the Rolls Royce Bentley Marque to produce SUV's.