BACK TO ALL OPINION BLOGS
Currently reading: Autocar writers' cars of 2020: BMW 4 Series
UP NEXT
Opinion: Why the Festival of the Unexceptional is an annual highlight

Tom Morgan says BMW's controversially styled coupe was, believe it or not, the highlight of his automotive year
Open gallery
Close

Based purely on the amount of social media vitriol it received on its unveiling, my choice might come as something of a surprise.

BMW calls the second-generation 4 Series an “emotional” design. We’ve diplomatically described it as “dramatic”, "impactful” and “distinctive”, although others haven’t been so kind. How appropriate it would arrive in a year when Joe Public had little else to do but sit in front of his keyboard and moan.

The kidney grille may be significantly more lung-shaped now, but does it really have a front end only a mother (or German car designer) could love? Honestly, in the metal, I don’t mind the new looks at all. It’s admittedly quite colour- and trim-dependant, but the cars I’ve seen in real life largely pull it off.

More important, in the rush to criticise it, everyone seems to have forgotten that the first-gen 4 Series was a fantastic driver’s car. A different nose hasn’t stopped that being true for the new one. Even the least powerful 420i is a delight, with impeccable long-distance road manners and a level of dynamic agility that is guaranteed to appeal to keen drivers. 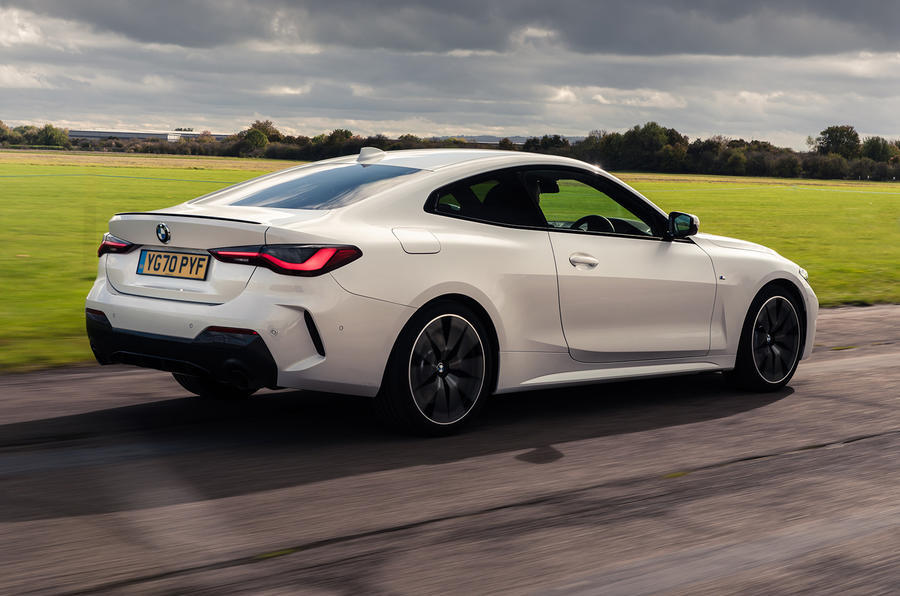 That I drove one back to back with a Mini JCW GP boasting an extra 120bhp and walked away preferring the BMW only serves to highlight that handling poise can be far more satisfying than outright performance. More powerful variants are now exclusively all-wheel drive, yes, but BMW’s rear-biased xDrive system should still prove entertaining enough when you want it to be.

As much as we love the G20-generation 3 Series, I think this controversial coupé is engaging in ways a four-door saloon simply can’t match. Even if it means having to park it backwards on your driveway until you’re over the shock-factor styling.

manicm, you obviously didn't get the joke.  I'm asking if the people writing these articles are subject to blackmail because I can't for the life of me understand why we keep seeing good reviews of these cars.  They have been widely panned for their numb steering and isolation.

I can't paste links in here but I can give you some US magazine quotes about the M4:

"It sounds like a Cuisinart choking on concrete. Scott Evans described its cold idle as 'one of those small, portable air compressors you plug into the lighter socket.' He's dead on." That's on the outside. Inside's worse, and it's made no better by the fake engine noise pumped in through the M4's speakers. "BMW's active sound management amounts to little more than spraying air freshener to drown out nasty bathroom smells," Cammisa said. It's fake, and noticeably so.

"The steering's numb, the shifter's sloppy, the engine's response is nonlinear, and the clutch pedal has far too much travel."

"We now live in a world where some domestic automakers are making better sport coupes than some of the Europeans."

"But the fact is that the 4 Series is still a reasonably well-engineered car, and a beautiful-looking one at that. What's missing is any trace of that special sauce that used to make BMWs worth the additional price: tuning."

Joetz your comment is a bad joke. Which American magazine said the previous 4 series was a mediocre handling car??? And how does Epstein fit in this puzzle? Please stay off the opioids.

joetz 24 December 2020
"More important, in the rush to criticise it, everyone seems to have forgotten that the first-gen 4 Series was a fantastic drive's car"

Wow, is the USA media insane for calling out the previous 4-series for its lackluster steering and mediocre ride/handling? It's amazing to read this stuff in the european press...there hasn't been a decent driving bmw since 2012.

Do BMW AG executives have some photos of autocar writers on Epstein's island? I don't get it