On the same day I drove the new Mini JCW GP, I drove a Porsche Cayenne GTS Coupé. The two are not rivals, I know.

But take a look at their respective statistics. The Porsche is a near 2.2-tonne SUV with a 3.5-tonne towing limit and can haul a family. The Mini is a strictly two-seat, 1255kg street racer with 302bhp. Knowing nothing else but that, which do you think ought to be the better driver’s car? Alas, no. What a pity.

This is the third-generation Mini GP, limited to 3000 examples (575 for the UK). The first Mini GP was a run-out special that became more than the sum of its parts in 2006, what with its diddy red door mirrors, no rear seats and limited-slip differential.

Another came in 2013 – affectionately known as the GP2 – and while it too was quite impressive, it was by then also quite expensive.

Now there's this. It has a four-cylinder turbocharged engine like the regular JCW, but whose power has been lifted to 302bhp from 5000-6250rpm and torque boosted to 332lb ft at 1750-4500rpm – both tidy increases (of 74bhp and 98lb ft) over the standard JCW. There’s a stiffened crank with a new bearing, a bigger turbocharger, new pistons and conrods and, appropriately, more cooling to go with it. It is, then, yet again the fastest production Mini made so far, a fact common to all three during their time. This wouldn’t have particularly mattered to how pleasing the first one was, but it has continued as a GP trope. This one can do 164mph and 0-62mph in 5.2sec.

The rear seats are again absent, it’s exclusively available with an eight-speed automatic gearbox (curiously) and the price is £35,345. Gulp. But the suspension is 10mm lower than the regular JCW’s, plus there are funky body add-ons, including a rear spoiler that could have come from a Gran Turismo concept, and 18in wheels with greater offsets to better fill those new carbonfibre arch extensions. Racy. 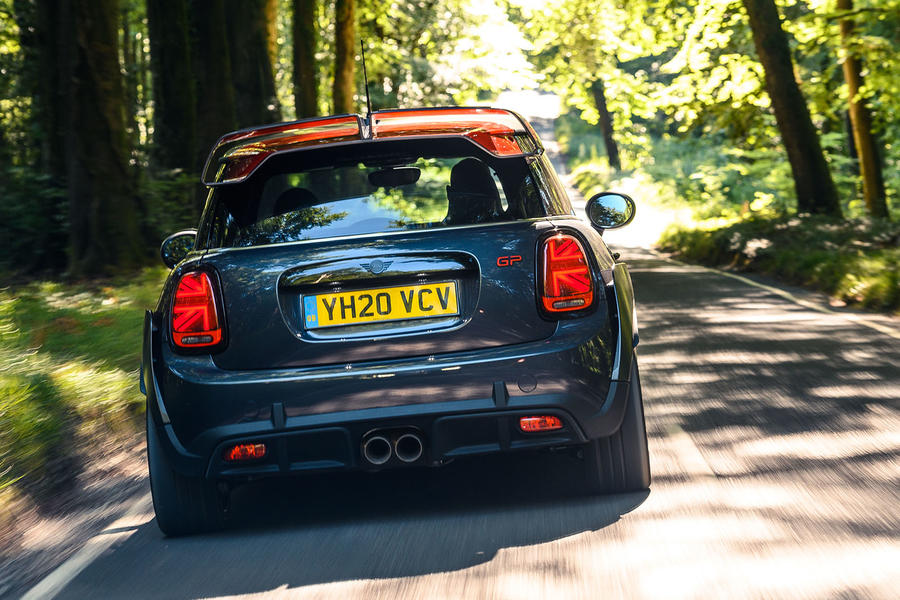 Inside, it’s what is absent from the JCW GP that marks it out as something special. In the space where the rear seats was is a crossmember, although this is a luggage stop rather than a strengthening brace. However, there are beefier suspension towers and a top strut brace under the bonnet.

There’s quite the brap when the JCW GP starts, followed, more often than not, by a few pops as it settles to its idle. Which is jolly good fun in a car park near a race track on a sunny day when people are experiencing the sheer joy of being allowed out for a drive to get an ice cream; but which might get tiresome for your neighbours at 6.30am come November.

It’s enough to tell you quite a lot about the Mini’s character, anyway: this is an exuberant and unrefined car, which would all be dandy if – like a Porsche 911 GT3 or even the old Renault Clio Trophy, for example – this was accompanied by driver-focused dynamics. But on this showing – or on UK roads – I’m afraid it isn’t.

We could begin with the ride. I don’t mind a stiff-riding car. McLaren and others have shown that you don’t have to have one to create a sporting car, but it’s also fine if you do – like a Ford Fiesta ST. And the Mini’s ride is hard, but there’s a lumpenness and woodenness alongside it, which is odd. It seems to add kilos and heft to what’s actually a quite respectable kerb weight. Rather than feeling poised and agile, the Mini feels clonky.

It tramlines too, badly. Across cats-eyes and cambers, it does it. On no throttle, it does it. Use the throttle and it torque steers. At the wheel, on a difficult road, you’re kept as busy at the wheel as you are in an Alfa Romeo 4C. On some cars, a level of interaction gives you something to do, making you part of the process. In the Mini, it’s just wearyingly tedious.

There’s got to be something beyond the looks, though, right? The engine? Ah, yes, perhaps. The 2.0-litre unit is big on power and torque but, some lag at low revs aside, responsive and smooth – and sometimes it makes gigglesome pops when you lift off. So quite why it has been mated exclusively to an eight-speed auto that fails to push gears through with the ferocity of a dual-clutch unit, and jolts weirdly into second on downshifts, is anyone’s guess. This is a muddled, frustrating car. 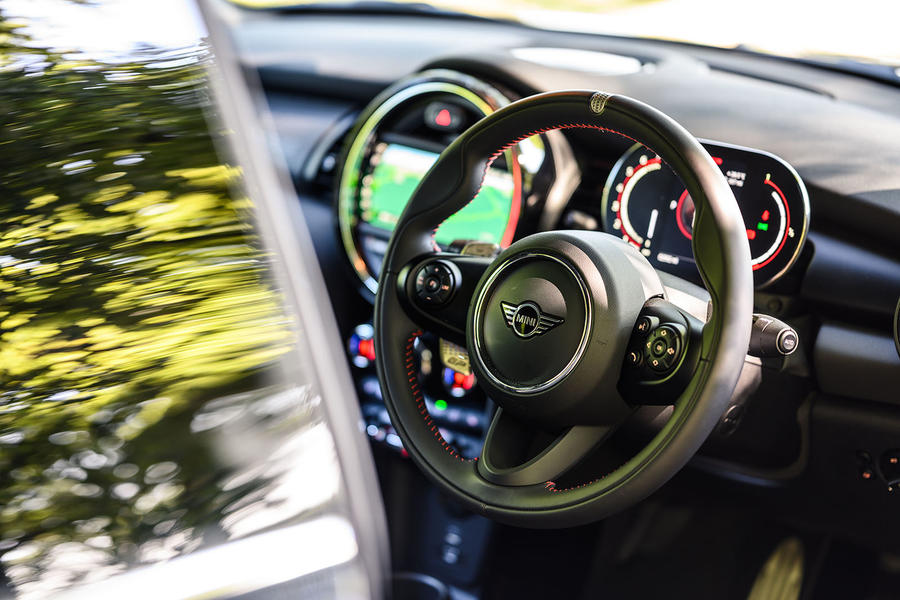 I wanted to love the Mini GP like I did the original. It's the sort of car that's right up my strasse: light, modestly powerful, small and agile. But no. You’d have to be a real Mini enthusiast to choose this JCW GP. Which is fine. You’ll be getting a well-finished, attractive limited-run car, and it does feel, and look, special. There’s something to be said for that alone. And it is fast.

And maybe, just maybe, there is a place where the JCW GP works, and comes alive. The Alfa 4C again: initial test drives at Alfa’s smooth, dusty test track were complimentary, and yet everywhere I’ve tried one in the UK it has been a disaster except on a slightly damp, perfectly smooth race track – where it was terrific. It’s possible the JCW GP works in similar conditions, but it feels like it has never seen a British road before rolling out of the factory.

So if you want a special Mini with a mega rear wing? The GP has it nailed. Want a brilliant hot hatchback? Spend half the money on a Ford Fiesta ST. 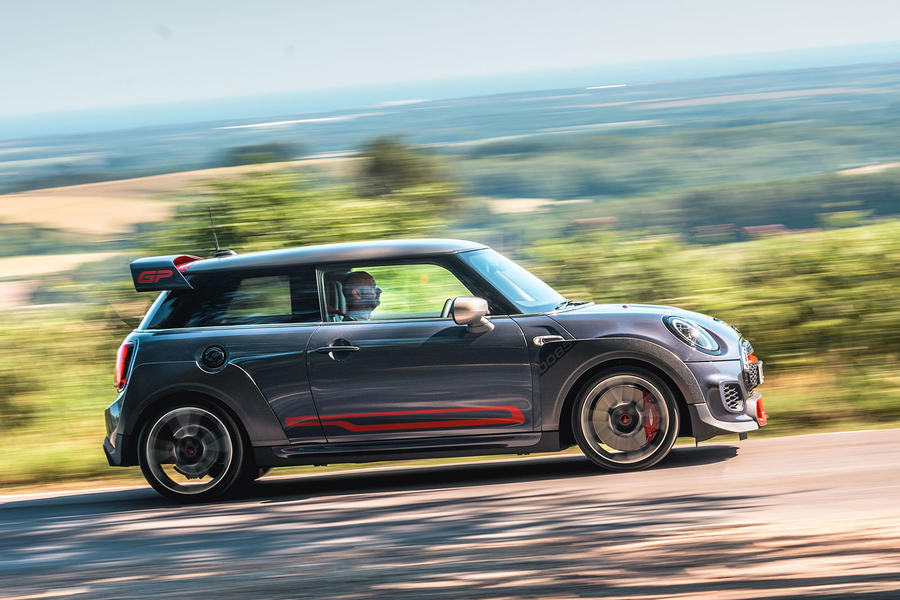 And that rear spoiler

A fool and their money easily parted

Why bother? All that power and it doesn't deliver. Plus the mandatory rock hard suspension. Migrane motoring. Golf GTI please that's plenty enough to drive to Waitrose.

This or the Yaris GR?

I'm surprised that for a car that is supposed to be lightweight, this isn't much lighter than the upcoming Yaris GR by only 25kgs. And that Yaris while less powerful (a touch slower of course) and without an automatic gearbox, has four-wheel-drive, and an unstripped interior, while costing £5,000 less than this Mini.