BACK TO ALL OPINION BLOGS
Currently reading: Autocar writers' cars of 2020: Bentley Continental GT Pikes Peak
UP NEXT
Opinion: Vandoorne back on form as Formula E hit Monaco

Simon Davis says why the hardcore Bentley coupé, built to tackle the world's most famous hillclimb, is his motoring highlight from the past 12 months
Open gallery
Close

Jump to 2020, to a soggy winter’s day in Northamptonshire, and another New Zealand-born driver (albeit with no race experience and zero King of the Mountain titles) is awkwardly trying to climb into that same car without clouting his head on its substantial roll cage. That person is me, and while I wasn’t entirely successful in avoiding a bit of a knock to my noggin, the following drive was still unforgettable.

Although it is still technically a production car, this is Limited-run by no means your average Conti. Inside, recognisable Bentley switchgear, dials and controls are bizarrely juxtaposed against the aforementioned cage, exposed welds, wiring looms and a fire extinguisher system. The glorious leather-upholstered sofas that usually pose as chairs have been replaced by a set of full-on racing buckets. There aren’t any carpets, and there’s no real sound-deadening, either.

So when its twin-turbocharged W12 fires into life, its usual rumble is replaced by a violent, almost deranged bark. Forget about the stately isolation and refinement you’d usually associate with Bentley’s phenomenal grand tourer. For all intents and purposes, this car sounds and feels like a full-on racer. 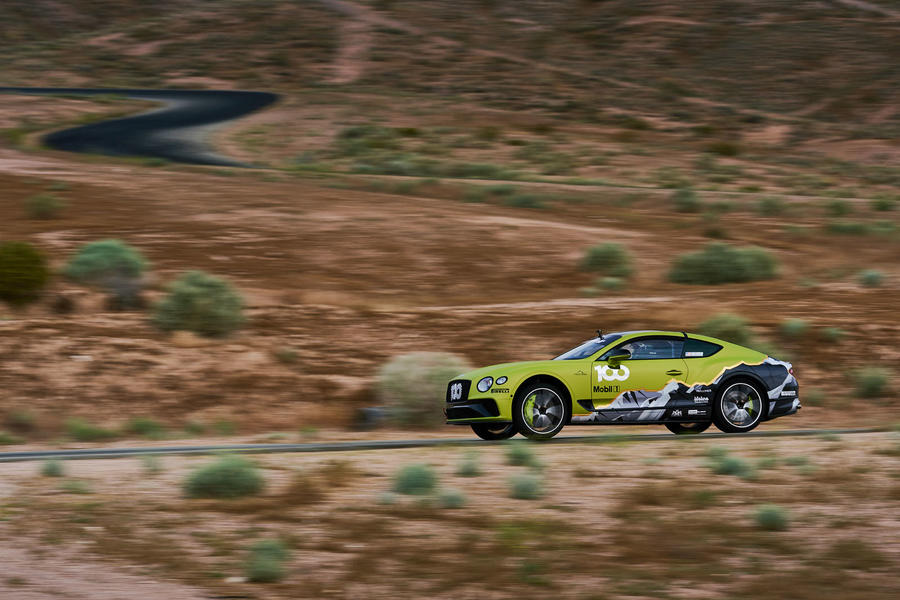 It goes like one, too. Plant your foot and that bark swells to a savage roar as the Conti squats down on its haunches and lunges furiously at the horizon. The sound of stones clattering loudly off its underbelly is drowned out by thunder, and you’re forced back into your seat as the engine’s 664lb ft comes into play. Forget about climbing mountains: that’s enough torque to move them entirely.

You have to be on your A-game through corners, though. With very little heat in its tyres, the Pikes Peak car is lively on slippery, leaf-strewn B-roads. A nudge of the throttle will make its tail step out quite happily, but such movements are easily caught with a quick flick of your wrists.

But despite its intuitive handling and still fairly pliant ride, this isn’t the sort of Bentley you’d want for a 10-hour drive across the UK. It’s just too raw – too loud and aggressive for such a task. But for a 20-minute blat through the countryside? I can’t think of many cars that’ll leave you feeling so wired on adrenalin. What fun.