BACK TO ALL NEWS
Currently reading: 2021 Indy 500 Preview: Veterans line up with new-generation stars
UP NEXT
2021 Mercedes-AMG S63 due imminently with snarling V8 hybrid

We've got the lowdown on who to watch out for in this year's race, and the points of history that are poised to be written
Share
Open gallery
Close
Share story

The 105th Indianapolis 500 takes place on Sunday night (BST) as IndyCar’s exciting new generation of stars take on the established old guard in what is set to be a classic edition of America’s greatest motor race. Here’s Autocar’s lowdown on who to watch out for and the points of history that are poised to be written.

New versus old on the front row

Five races down in 2021, five different IndyCar winners – four of whom are under 24 years old, and three of whom are first-time victors. Now the trio that make up the front row of the grid for the race that matters more than any other in US open-wheel racing perfectly encapsulates that delicious premise of new talent versus old.

Six-time champion and 2008 Indy 500 winner Scott Dixon starts from pole position, the 40-year-old having pipped 21-year-old Colton Herta by just 0.030mph for a four-lap average around the 2.5-mile four-corner oval of 231.685mph. The driver who starts on pole has won the 500 five times in the past 20 years and Dixon, who currently leads the points standings too, is simply one of the finest IndyCar drivers in history. He is always tough to beat.

But Herta and fellow front-row starter Rinus VeeKay, 20, will both fancy their chances. The pair are among IndyCar’s youthful race winners this year, VeeKay scoring his breakthrough victory on the Indianapolis road course earlier this month. If Herta, VeeKay or 22-year-old Alex Palou prevail they will break Troy Ruttman’s youngest-ever 500 winner record that dates all the way back to 1952. Palou starts on the second row. 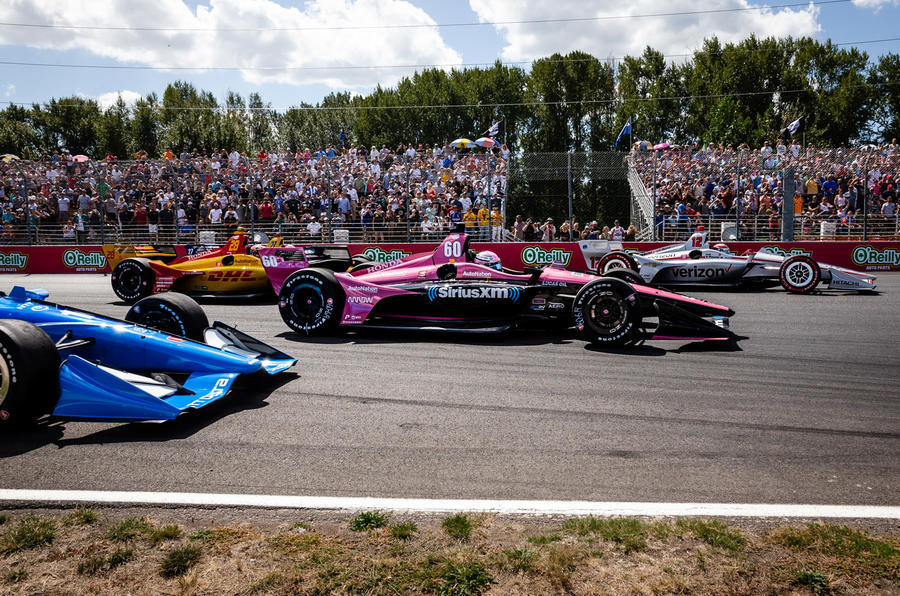 Veterans can't be ruled out

Among the ‘old-timers’ out to ruin the young guns’ ambitions are VeeKay’s team boss and Indy specialist Ed Carpenter, 40, who has qualified fourth – just 0.008mph slower than his Dutch charger. Alongside him on the second row is Brazilian Tony Kanaan, 46, winner of the the Indy 500 in 2013 and back for another crack at the ‘big one’.

Another familiar name on the grid is Juan Pablo Montoya, seven-time grand prix winner and twice a 500 victor. The Colombian returns with Arrow McLaren SP and lines up 24th, which leaves him with plenty to do to add a third victory to his Brickyard tally.

Three-time winner and former IndyCar favourite Helio Castroneves, 46, is also back and has been running quickly. He made the top-nine qualifying shootout and lines up on the third row as he bids to join AJ Foyt, Al Unser Sr and Rick Mears as a four-time 500 winner.

No Penskes in the top nine

The biggest surprise at Indy so far this May is the failure of any one of Team Penske’s four drivers to make the top nine. Leading the quartet is reigning Australian V8 Supercar king Scott McLaughlin, who will start 17th. The Kiwi is one of two rookies on the grid, along with Pietro Fittipaldi – grandson of F1 and IndyCar legend Emerson – who lines up 13th.

Harvey and Wilson fly the flag

Final words to the two Brits who have made the 2021 Indy grid. IndyCar series regular Jack Harvey, who has been highly impressive this year for Meyer Shank Racing, lines up 20th, while Stefan Wilson, younger brother of the late and much-missed Justin Wilson, starts 28th out of the 33 runners. If you’re based in the UK, catch the action on Sky Sports F1.