From £36,9507
The V90 T8 is a highly capable and efficient big estate, but it is not as versatile or as smooth-riding as a Volvo should be
Open gallery
Close

If you’re looking for a large luxury estate equipped with a plug, your options are limited.

Mercedes has yet to apply the 350e powertrain to the E-Class Estate, it’s unlikely that BMW will offer a Touring version of its excellent 530e and the arrival of an Audi A6 Avant e-tron remains a distant, murky prospect.

That leaves the Swedes. Volvo, specifically, with the T8-badged version of its handsome Volvo V90 estate, which in solely oil-burning guise we’re rather fond of.

This flagship wagon uses a similar mechanical set-up to the T8 XC90 SUV, which is to say a force-fed four-cylinder petrol engine – the marque no longer indulges in a greater cylinder count for any model – that drives the front axle while an electric motor does so for the rear.

Bridging the two power sources is a 10.4kWh battery pack (larger, surprisingly, than the 9.2kWh unit in the XC90) that can be brimmed in as little as two and a half hours. Volvo has usefully positioned the unit as though it were the car’s spine, meaning boot space isn’t sacrificed in order to give the car its hybrid status, as is typically the case.

Claimed electric range is 28 miles – just about par the PHEV course in 2017 and enough for a reasonably short commute. Charge up at work and the V90 T8 could be the cheapest 400bhp estate car you’ve ever run.

The numbers reflect that power output: 0-62mph is summarily dispatched in just 4.8sec, while top speed is 155mph – more or less an exact match for the V8-engined B7 Audi RS4, which not so long ago seemed outrageously quick for an estate.

What that car couldn’t claim, of course, was CO2 emissions of just 46g/km. That means you’ll pay no tax for the first year of V90 T8 ownership, while combined fuel economy is 141.2mpg. 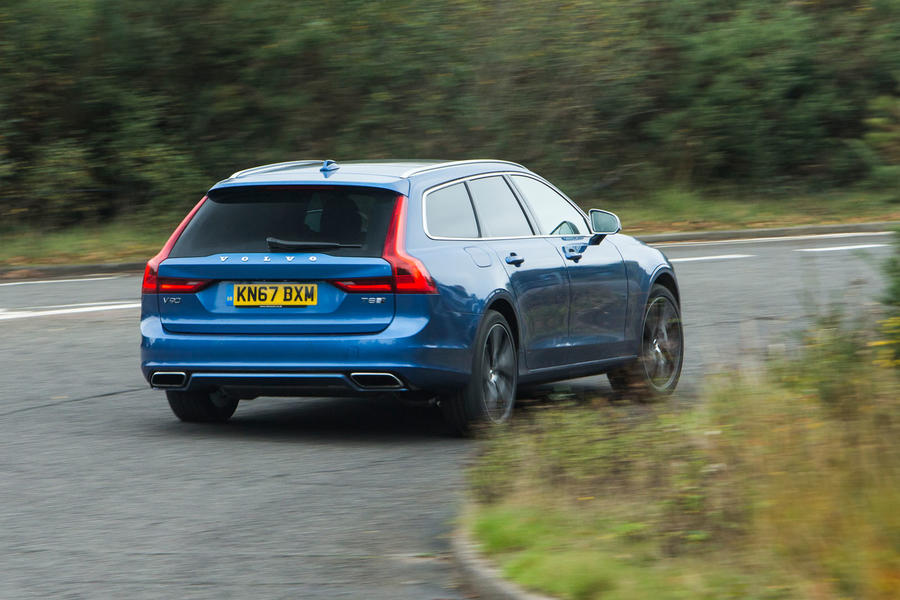 This is a dexterous powertrain, capable of persisting solely with electric power all the way up to 78mph or, by simultaneously engaging the twin-charged engine, locking itself into four-wheel-drive mode to improve low-speed traction on treacherous surfaces. Replenishing the battery on the move is a matter of selecting the battery-charge function within the slick central touchscreen, at which point the T8 morphs into a 312bhp front-driver. The wheelspin this can initiate is most unbecoming of a svelte Volvo estate, it must be said.

Engaging kickdown, however, unleashes a four-wheel-driven, petrol-electric total of 401bhp and a startling turn of pace that’s not always easily managed, given the car’s two-tonne-plus heft, with notable body roll owing to the laid-back suspension tune and disconcertingly spongy pedal feel from the regenerative brakes (highly effective they may be once caliper finally meets disc). Provoke this behemoth with care.

As is so often the case with dual-source powertrains, the V90 T8 is best left in its default Hybrid mode, in which the car itself manages the division of power. The digital dials have a novel, useful way of displaying the point at which the engine will ignite, which varies with remaining battery charge and throttle input, and under reasonably light loads the combustive element of the powertrain drifts in and out of effect almost imperceptibly. It’s at this point that the car is everything you want from a modern Volvo estate – effortless, cultured and unendingly sure-footed, slightly rigid ride notwithstanding.

Push on and, as alluded to, compromises begin to reveal themselves. Our test car – optioned to an eye-watering £67,580 thanks in part to its adaptive damping with rear air suspension (£1500) and Bowers & Wilkins sound system (£3000) – is a beautiful machine in so many ways but, at 2011kg, it is certainly not the drivers’ car that its R-Design body kit might suggest. Under the duress of successive direction changes, all that metal takes up the slack in the springs in a slightly clumsy manner, leaving the car a step behind the topography of the road. The engine, though effective, also takes on a flat, industrial tone when stressed. 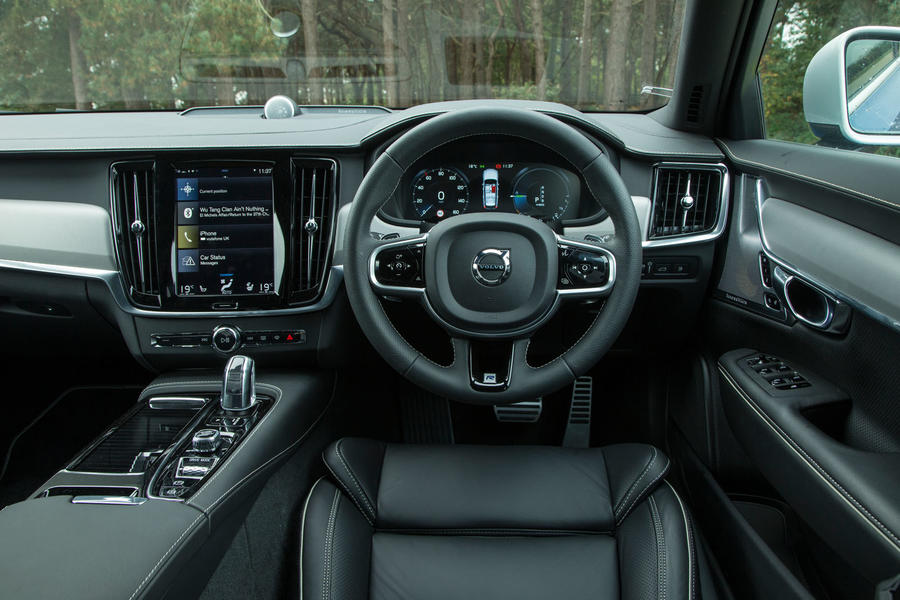 Those for whom the car’s modest electric range can bear the brunt of their daily mileage will own something of tremendous versatility. Anyone else who wants a sprightly Volvo V90 might be better off settling for the smoother-riding D5 AWD and save themselves £14,000 in the process. 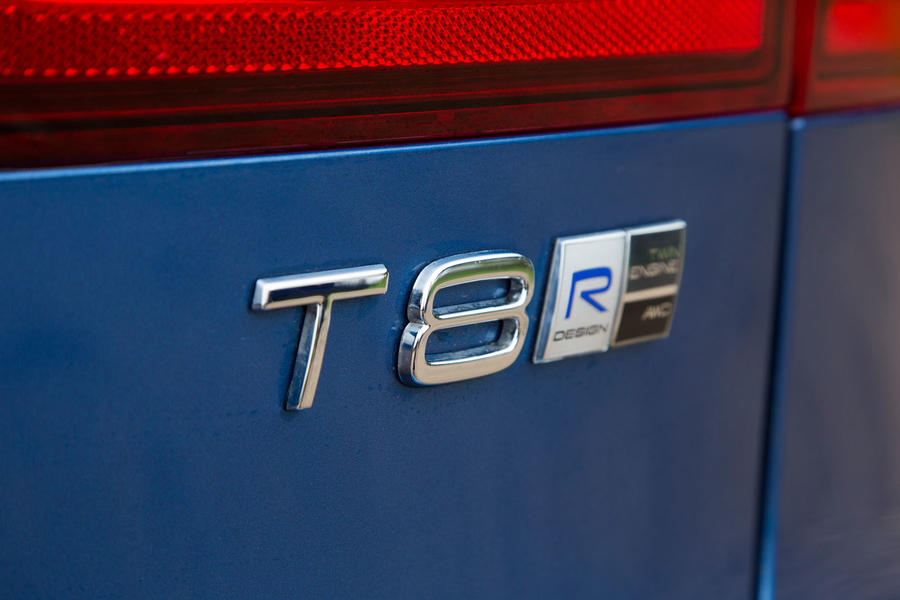 Is it only me who dislikes

Is it only me who dislikes the back end? Front looks amazing though

If you can take advantage of

If you can take advantage of the taxation there's a lot to like here, personally I'd prefer the T6 Cross Country which gets around the brittleness of some of the mainstream Volvos. Let the Germans do the cod-sportiness, focus on comfort, refinement and quality instead.