The Volvo V90 Cross Country is essentially a more rugged, off-road-oriented version of Volvo’s new estate that has been designed to take the fight to the ever-popular Audi A6 3.0 TDI Allroad quattro and the technologically advanced Mercedes E 350d All Terrain.

It follows in the footsteps of a number of other Volvo Cross Country models - a legacy that dates back to 1997 and the launch of the original V70XC. Conceived to bridge the gap between a load-lugging wagon and a high-set SUV, that original off-roader-cum-estate proved to be surprisingly popular with buyers in North America and Europe, thanks to its rugged yet understated looks, and unshakable all-weather ability.

In fact, Volvo got the ratio of off-road looks to on-road ability so spot on, that all following Cross Country models have followed the original car’s design to a tee; a trend that the V90 Cross Country proudly continues. Therefore, the ride height of the all-wheel-drive chassis has been raised by an extra 65mm, the front track has been widened by 20mm (the rear by 40mm) and the specially designed tyres are 42mm larger in diameter. “This is not a just an exercise in rugged styling” Volvo insists.

With that said, the V90 XC also receives those recognisable iconic black plastic wheel arch extensions, blacked out trim pieces and front and rear titanium skid plates. However, you can’t help but notice that there has been a slight change in approach to the overall design, which looks deliberately more refined and polished compared with the previous V70 XC.

In fact, for the first time, buyers can now select body-coloured alternatives - a design decision, which may or may not please those customers who enjoy the odd green lane. 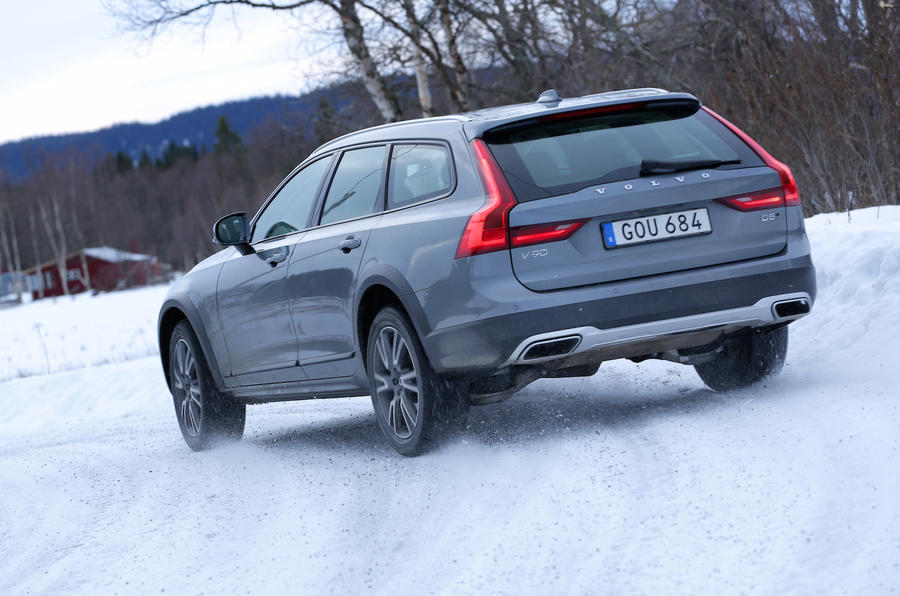 Aside from a black walnut trim and leather-clad dashboard, the cabin is virtually identical to its road-going counterparts, which is no bad thing. Every surface feels impeccably constructed, the 9.0in portrait colour touchscreen remains one of the most intuitive systems of its type on the market and despite the car sitting 65mm higher, the added ground clearance only improves your view of the road from behind the steering wheel.

Yet when you’re underway, it quickly becomes apparent that the Cross Country has a remarkably different character to the regular V90. Where the standard car struggles to strike a balance between sporty handling and optimum ride comfort, the Cross Country is unashamedly supple. Fitted with all-new dampers and the latest evolution of Volvo’s optional air suspension, it rides with a smoothness and pliancy that feels entirely befitting of a large luxury off-roader. 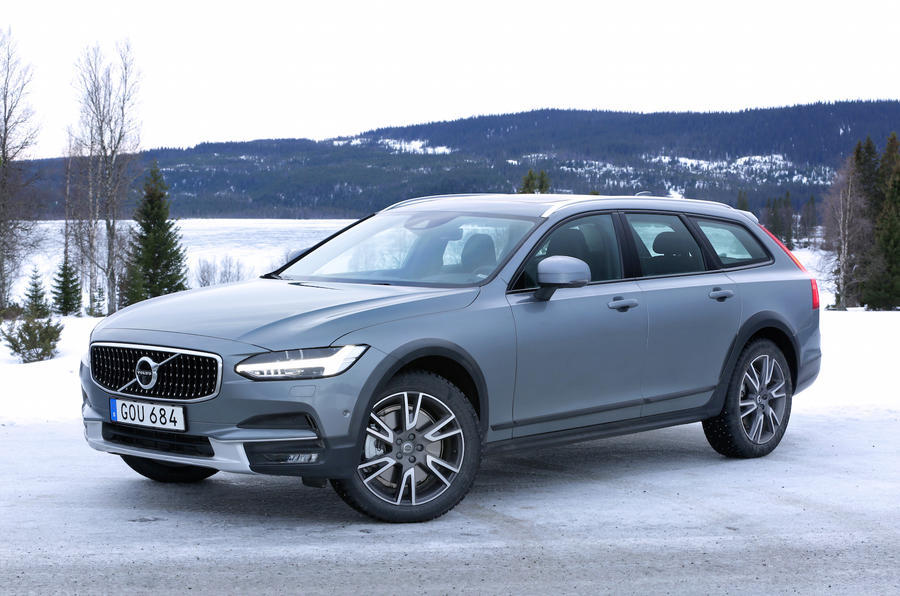 These qualities are backed up by impressive body control. Over crests and dips, our test car remained resolutely unphased, with those aforementioned dampers doing an impressive job of smoothing out sudden vertical inputs. Granted, there is a touch more body roll during hard cornering – the result of having a higher centre of gravity than its standard sibling – but it’s not to the extent that it detracts from the V90’s capability as a comfortable long-distance cruiser.

Unfortunately, our test car came fitted with studded winter tyres, which limited our understanding of how the car will behave back in the UK. However, with the aid of an ice-covered lake, and some untreated Swedish roads, we still got a good idea of the car’s dynamic capabilities. Set up to be neutral, the Cross Country felt surprisingly mobile at the rear axle, although not worryingly so - small slides were controlled and predictable, and larger angles were quickly caught by the progressive stability control and smart four-wheel drive system.

However, despite its surprisingly playful nature, the Cross Country still feels at its best when driven smoothly. On long open roads the flexible D5 diesel engine fades into the background, the cabin remains virtually silent and even on aggressive winter rubber, road noise is minimal. As a long-distance cruiser, you’d be hard pushed to do better. 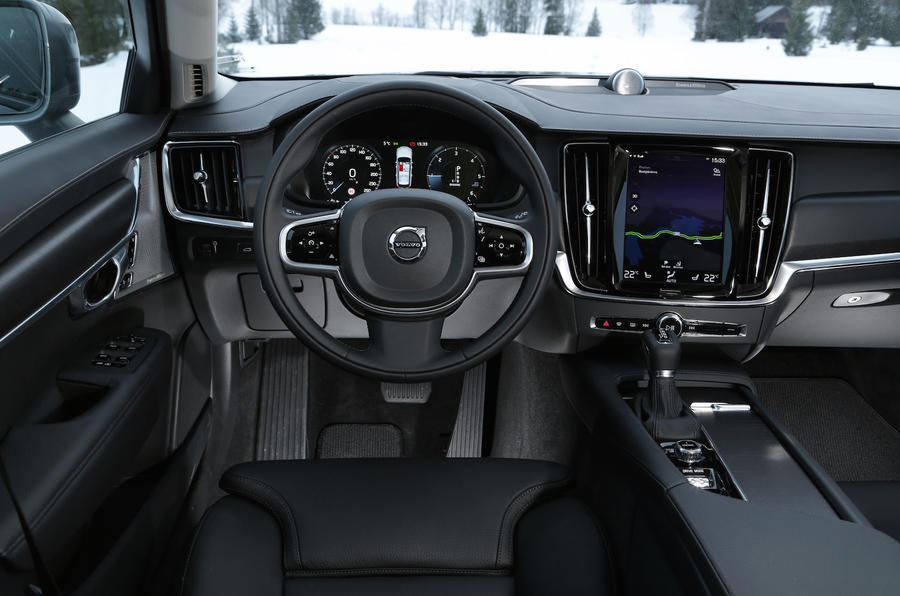 Like the original V70 XC, Volvo has managed to strike a good compromise between off-road looks and on-road ability. The increased ride height has resulted in very little deterioration in overall handling, and the feeling of safety and security in winter conditions is a characteristic that families are ought to love; something certainly borne out by Volvo’s predictions that the Cross Country will account for around 25% of V90 sales.

But more than that, the Cross Country feels like the most complete V90 to date. With the Scalable Product Architecture (SPA) now fully understood by Volvo, and the need for sporty handling taking a back seat, the engineers have been able to hone its ride comfort, turning the V90 into what it always should have been: a proper continent-cruising tourer.

Volvo has stated many times that they arent actually looking to compete directly with the big 3 Germans. They are finding their own road and seek to take just a maximum of 10% of their sales. Volvo is a company on the up. The 90 models are ALL amazing and the upcoming 60 series is set to repeat that.
Spanner 27 January 2017

Also the central console reminds me of a cyberman, which I find a bit scary to my inner 7 year old. Does it have a steering wheel in the boot so I can hide behind the rear seats to drive it? If not, again I won't be placing a deposit.
Spanner 27 January 2017

Does it have the window feature of my old Volvo V70?

Where after 17 years the window drops out? I found this very useful on the way to the airport the other day, it really saved me time with the tiresome issue of opening and closing the window to enter the car park.

If it does not have this, I won't be trading up. I can't bear this windy up and down nonsense. Admittedly when it rains and is chilly it is a bit of a drawback, but hey, how many days a year does this happen? Oh....