From £46,6508
Higher-spec four-wheel-drive version of the classy new Volvo V90 estate is tested on UK roads for the first time and it's no less impressive
Open gallery
Close

The Volvo V90 marks the return of the classic big Swedish estate, albeit remodelled for modern car-buying tastes. Together with its four-door S90 sister, the V90 follows in the wheel tracks of last year’s Volvo XC90, continuing the Geely-owned company’s reinvention.

We’ve recently assessed the front-wheel-drive Volvo V90 D4 in the UK and driven this more powerful all-paw variant abroad, but now it is time to sample the D5 on our roads.

Volvo UK’s policy is to keep its basic model range simple for customers to navigate. A 2.0-litre diesel powerplant mated to an eight-speed automatic gearbox is available in two flavours: front-wheel drive and 188bhp in the D4 or all-wheel drive and 232bhp in the D5 tested here. 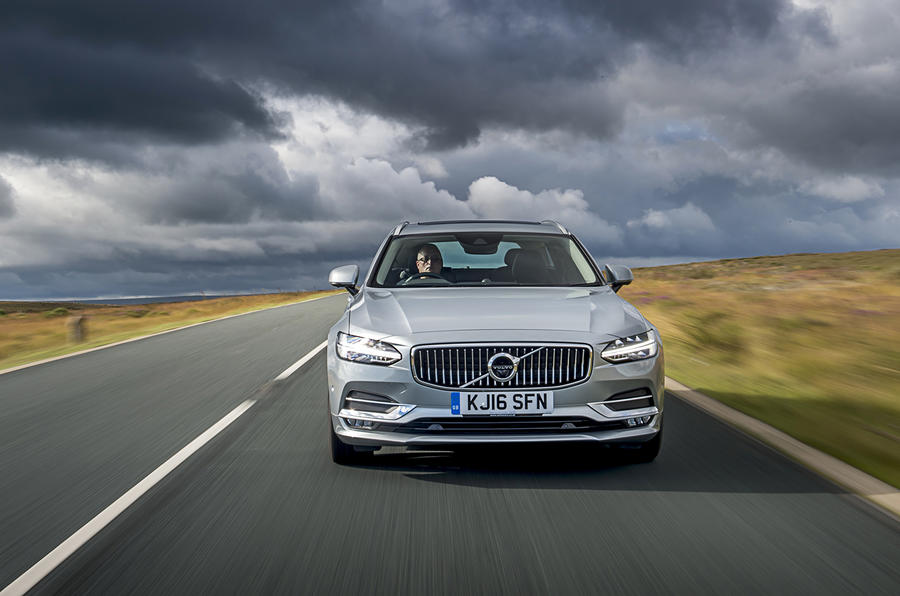 There’s no pure petrol offering in the UK at the present. The T8 Twin Engine, arriving later, is the sole petrol derivative and mates its 2.0-litre engine with an electric motor.

Right now, you can have your Swedish luxury saloon or estate in a choice of two trims, Momentum or Inscription. A third, more sporting R-Design variant is due late this year with a more dynamic chassis package and body styling. A more rugged Cross Country version of the V90 is also in the works.

You can, of course, choose to adorn your V90 or S90 with a range of optional extras that can swell the price. Our test car was fitted with an additional £10,870 of options, coming in at £54,925, with £3000 of that being accounted for by a stonking Bowers & Wilkins audio system.

The company might have embarked on a brave new chapter, but the V90 still feels as unmistakably Volvo as ever; that is to say, comfy, cosseting and secure for the driver and passengers.

To our eyes, it is a handsome car, although the sleeker, modern profile sacrifices a little of the square-jawed sturdiness and practicality upon which the manufacturer’s reputation was built.

Judge from the all-important boot space: the Mercedes-Benz E-Class wagon trumps it for seats-up boot space, 600 litres to 560, but the V90 is almost comparable with the Audi A6 Avant (565 litres) and equal with the BMW 5 Series Touring (560 litres).

The Volvo offers a power-operated tailgate as standard, split folding backrests on the rear seats that make it possible to accommodate loads of almost two metres in length and a wide, low boot lip to make loading as easy as possible. 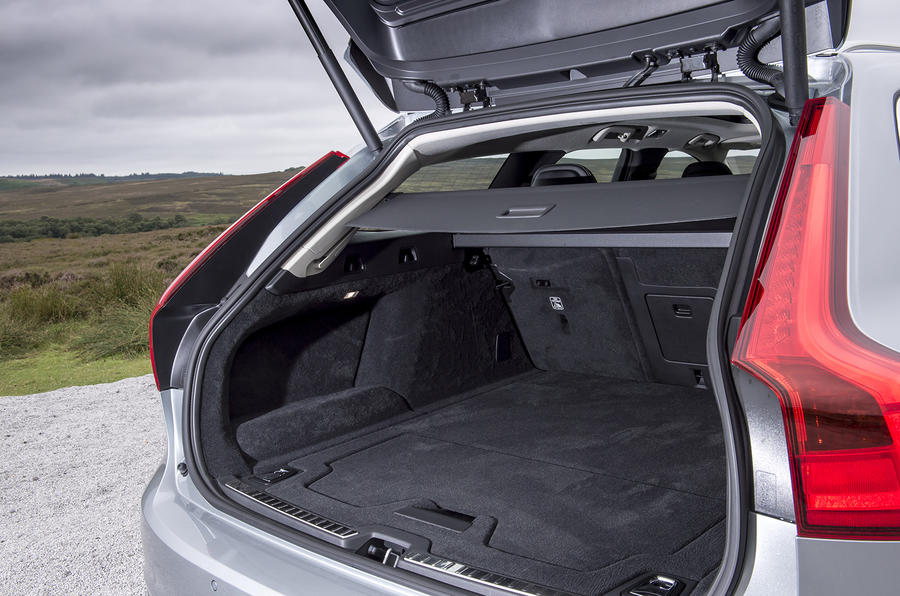 Up front, our test car’s powered panoramic sunroof (part of an optional £2000 package) bestowed the cabin with a light, airy ambience, enhanced by the use of wood and other plush-feeling materials in this top-spec Inscription variant. The seats are comfortable and the driving position is good, with plenty of seat and steering wheel adjustment to accommodate most sizes and shapes of driver.

Taking centre stage in the cabin is the portrait-orientated 9.0in touchscreen, described by Volvo as an evolution of the one showcased in the XC90. There’s a pleasing logic to the ordering of menus and sub-menus. It is easy to use once you get familiar with the layout and the system of pinching and swiping the screen. There were a few occasions during our test drive when we yearned for a close-at-hand rotary controller in addition to the touchscreen, but we suspect the set-up will quickly become second nature for most. 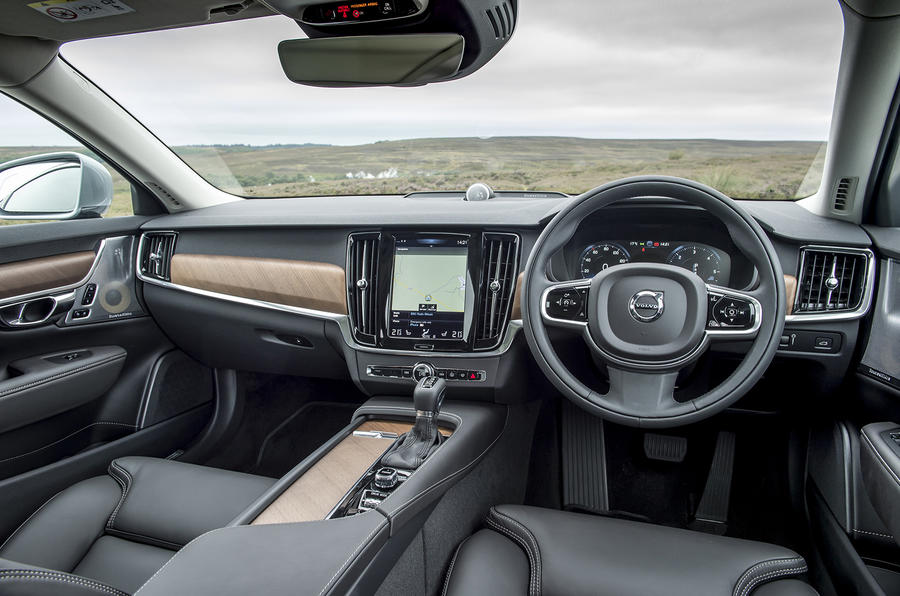 You start the engine by turning a glitzy toggle by the gearstick and engage drive from the eight-speed automatic box. There are no steering wheel-mounted paddles to change the cogs. As you accelerate away, the D5’s extra pace and traction compared with the D4 are immediately evident, not least because the turbocharged 2.0-litre has a little party piece to get things moving, named PowerPulse.

It’s a clever system invented by two young Volvo engineers and uses an electrically driven compressor to blast pressurised air into the exhaust manifold when the driver accelerates. It helps to spool up the first turbo before the exhaust gases join in, counteracting turbo lag and resulting in an impressively rapid and linear response. PowerPulse is currently available as standard on the all-wheel-drive D5 only.

Although driver engagement isn’t necessarily this estate’s raison d’être, it’s not exactly lacking, thanks to that surfeit of power. All V90s get three driving modes: Dynamic, Comfort and Eco. As with some similar set-ups, engaging Dynamic mode spices up the responses of the suspension, steering and throttle. And as with some similar set-ups, it isn’t completely successful: as well as quickening the steering’s responses, it incorporates some additional resistance that feels rather artificial. The Comfort setting seems perfectly adequate for this V90 in most situations.

Our test car was fitted with the standard suspension rather than the optional (£950) self-levelling air springs at the rear. A back-to-back comparison of the suspensions on cars both riding on 18in alloy wheels suggested that the standard set-up creates more patter and noise over rough surfaces and invokes a touch more body roll during cornering, but not to the extent that it detracts from the V90’s capability as a comfortable cruiser. 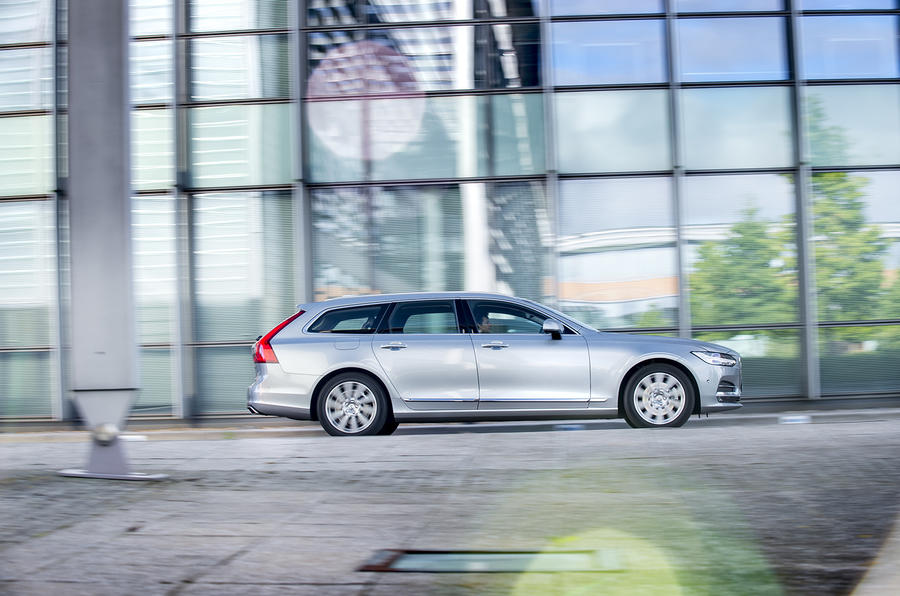 The V90 features clever technology aimed at making its occupants’ lives safer and more comfortable. They’ve seemingly thought of everything, even a system for reacting to large animals that may have strayed onto the road, as well as a raft of tech to mitigate an accident and damage to occupants should one occur.

We weren’t altogether convinced by the semi-autonomous Pilot Assist system on the car we tried. It offers assisted driving on motorways by combining active cruise control with lane keeping assist at speeds of up to 80mph, reducing driver effort and stress in heavy traffic.

The system has merit, but in our test car, it had a habit of tracking much more closely along the nearside white line, rather than being centred in the lane. If you’re in the middle of a busy motorway, it can feel like the system is guiding you unnervingly close to the adjacent vehicle on the left. Perhaps Britain’s ragged road surfaces and lane markings do not reflect the system to the best of its abilities.

With the V90 and the XC90 before it, Volvo has embarked on an exciting future with a rediscovered confidence and a bold premium sheen to its products. That is reflected in the keen pricing structure for the V90 and, as we pointed out in our recent review of the D4, it’s likely that many motorists would find the cheaper estate derivative equal to their needs, as well as being cheaper to run.

That’s certainly borne out by Volvo’s predictions that this D5 will account for 20% of V90/S90 sales, compared with 70% for the D4 and 10% for the T8 hybrid. For those who prefer the reserved subtlety of a powerful all-wheel-drive estate to a more imposing SUV as a lugger of people and loads, this V90 variant could hold plenty of appeal.

Cars such as the 5 Series Touring can claim victory in terms of dynamic prowess, but the Swedes are willing to concede that point, preferring to give the big Volvo a distinct charm all of its own within a hard-fought market segment.

After the XC90 started a new chapter for the brand, the V90 is affirmation that Volvo has its mojo back.

£44,000 for 4 pot 2.0 diesel, an estate with an undersized boot and the fifth person is accommodated badly, heated windscreen nozzles are an extra as are remote child locks – NO THANKS
View all comments (7)