From £41,170
The newest version of Volkswagen's flagship SUV shares much with the Audi Q7 and Porsche Cayenne, but it's taking a different route to head upmarket
Open gallery
Close
by Dan Prosser
1 March 2018
Share

It was back in 2002 that Volkswagen introduced the original Touareg, its first SUV. Sixteen years later, the company has sold close to a million Touaregs across two generations, a success story that has encouraged it to continue launching new SUVs of varying sizes; having not offered a single one two decades ago, the brand's SUV line-up is four-strong today.

The all-new, third-generation Touareg sits at the head of that quartet; at the top, in fact, of the entire VW range. As if to acknowledge that top-dog status, VW has delivered not only a new Touareg that’s laden with technology, but also one that ranks among the best-executed models it currently sells.

Like most of the group’s large 4x4s, the Touareg is based on the MLB platform, the same basic architecture that underpins the Audi Q7 and Porsche Cayenne. However, VW is quick to point out that the Touareg isn’t merely a Q7 or Cayenne by another name. Its wheelbase is 70mm shorter than the Q7’s, for one thing, and its chassis tuning is entirely bespoke. Compared with the previous Touareg, VW says this latest version is lighter – although there are no exact numbers just yet – despite being 77mm longer and 44mm wider.

One outcome of the world’s rapacious hunger for SUVs is that car makers have put huge amounts of effort into improving the breed. The very earliest 4x4s were big and heavy, with very high centres of gravity. The latest examples are no exception, but rather than surrender to those fundamental traits with a defeated shrug – traits that would conventionally make a car feel more like a lumbering bus – manufacturers have developed reams of very clever chassis technologies. The new Touareg is dripping with them.

At least, it is if you pay to specify it that way. A base Touareg rides on steel coil springs and passive anti-roll bars, but you can add two-chamber air suspension and rear-wheel steering; specify both and you can add active anti-roll bars, too. Between them, these widgets attempt to stop the heavy, high-riding car from driving like a heavy, high-riding car. 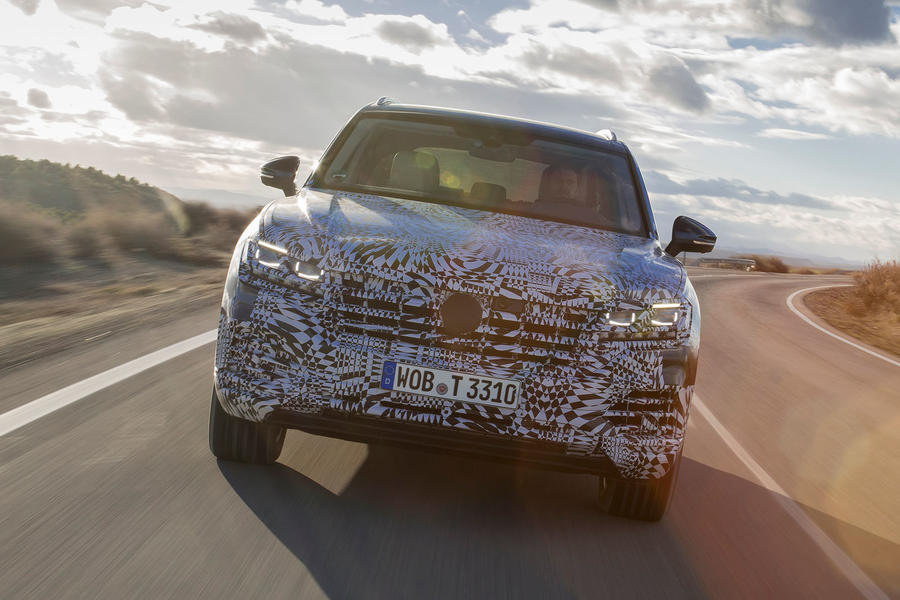 Pitched at the luxury side of the SUV market, the Touareg doesn’t have the same high-performance remit as the Alfa Romeo Stelvio Quadrifoglio or BMW X5 M, so it isn’t as agile in outright terms. But on the basis of our early drive in Spain, it’s clear the Touareg does disguise its size, weight and height as well as any other SUV before it.

The engine line-up includes a pair of 3.0-litre V6 diesels – one with 228bhp, the other with 282bhp. In the autumn, around the time that the Touareg will reach the UK, a 335bhp petrol V6 will join the range. A diesel V8 and a plug-in hybrid will follow in due course, although VW is yet to confirm which of these will be offered in the UK.

An eight-speed automatic gearbox and 4Motion four-wheel drive will be common across the range. The four-wheel drive system can send up to 70% of drive forwards and 80% rearwards. Unlike in some rivals, though, notably the Cayenne, there's no torque vectoring capability across the rear axle; VW says the Touareg’s existing chassis trickery means it simply doesn’t need it.

A 3.5-tonne towing capacity, incidentally, marks the big Touareg out among other premium SUVs.

It mightn’t scale rocky inclines or descend muddy slopes with quite the disdain of the Range Rover (we will report back as soon as we’ve had an opportunity to properly explore the Touareg's off-road talents), but VW insists it is capable in the rough. The suite of off-road driving modes should see to that.

While we wait to find out how effective it is in the mud, we wait to see what it’ll actually look like, too. The front and rear styling, as well as the interior, are being kept under wraps, at least until the Touareg makes its world debut in – notably – Beijing, China, towards the end of March.

Our car's camouflage wrap was peeled back for the assembled media on our drive event, though. The new Touareg is handsome, with sculpted flanks and prominent rear haunches, while the front end is dominated by a flashy grille and headlight assembly that’s finished in eye-catching chrome.

If it was the understated styling and relative anonymity that appealed to buyers of earlier Touaregs, this new model might not strike those same notes, but when the Touareg’s biggest market – yep, China – asks for a more premium look, a more premium look is what it gets.

Equipped with the full arsenal of chassis tech, the new Touareg is very good to drive. Those air springs give it the composed, sophisticated ride quality of a big luxury saloon and the electrically assisted steering is crisp and precise.

The rear-wheel steering, meanwhile, is extremely effective at low speeds, giving the Touareg the compact turning circle of a London taxi. The rear-steer hardware is shared with the Cayenne, but the tuning is specific to the Touareg. Specific enough, in fact, to make the two cars feel very different.

VW’s chassis engineers set out to make the car seem as though it’s pivoting about a point somewhere between the rear seats, not its centre point as with the Cayenne.

It’s just one example of VW having worked very hard to give the Touareg its own dynamic identity, despite the shared platform. What strikes you first is its manoeuvrability around town, and its stability, refinement and ride comfort on the motorway.

Apart from all that, VW wants the Touareg to be fun to drive too. Wishful thinking? Not necessarily. In all driving modes, but particularly Sport, the Touareg keeps its masses under such tight control that you drive it the same way you would a saloon. You don’t ever have to make allowances for its height or its weight.

It’s all to do with the chassis trickery. The active anti-roll bars cancel out around half of the normal body lean in corners, which is enough for the car to feel stable and secure but not so much that you don’t get any impression of how hard the tyres are working.

And these bars get cleverer still. If the car is about to understeer or oversteer, they can finely adjust the amount of roll resistance at each axle, while the computers juggle damper stiffness and rear toe angle, to claw back stability. It’s remarkably clever, and the result is an SUV that simply doesn’t drive like one.

Most impressive of all, though, is that the technologies are all deployed with such subtlety that they feel intuitive, not artificial. Elsewhere, the more powerful of the two diesel V6 engines is strong and responsive when you want it to be and refined when you don’t. Only the dim-witted gearbox response in Comfort mode lets the side down. 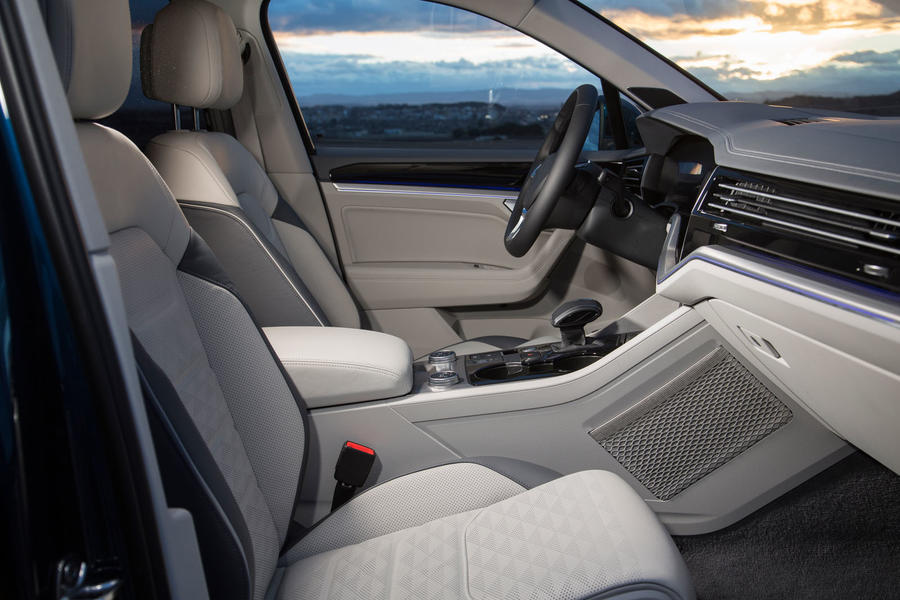 We’ll have a fuller opportunity to assess the new Touareg on the international media launch in a few weeks. For now, though, the signs are that VW has built its finest SUV yet. 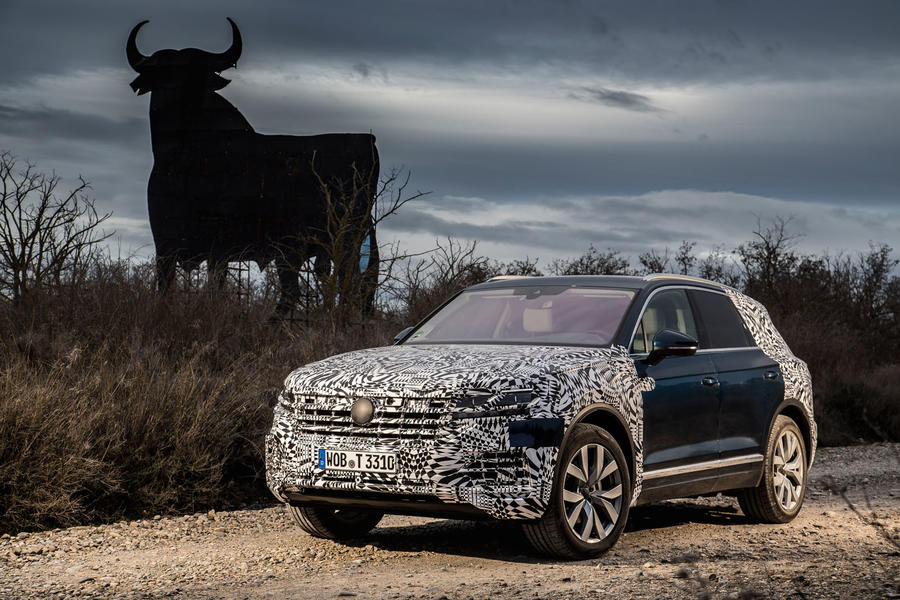 died in developing this

died in developing this

Autocar car were told by VW

Autocar car were told by VW to review this ...  afterall autocar's got to survive.!!  :)