From £22,3557
Best-selling SUV has a reputation as something of an all-rounder. Is that still true following a mid-life refresh?
Open gallery
Close

In short, it’s what you’ll see plenty of. The Tiguan is a hugely popular SUV - Volkswagen’s most popular car worldwide, no less - and the Life is, according to VW, going to be the most numerous trim in the UK.

And just to add to the all-round popularity stakes, the engine we’re testing in this Ford Kuga rival - the 1.5 TSI 150 - is predicted to be the one that most people will plump for as well.

We’re testing it because the whole range has been facelifted, with tweaks to the drive, assist and infotainment systems, along with some worked-over looks. On the last of those, new LED headlights and front bumper, as well as newly designed alloys, are the highlights of the changes. It’s a subtle makeover (aren’t they all?) and has been tailored to bring the car more in line with the larger Touareg, but neither of these observations is a criticism. It’s a sharper-looking car now and has only improved on what was already a decent-looking family SUV.

One thing to help the badge spotters out there: if you see a Tiguan with the model name centrally placed under the boot’s VW roundel, you’re looking at the latest car.

There are also new trims as part of the facelift. Gone are the S, Match, SEL and R-Line Tech levels, to be replaced by the base Tiguan (no trim level designation on that one), moving up into Life, Elegance and R-Line.

Inside, the big change is on the lower tier of the centre dashboard. The new climate control system is now a largely touchscreen set-up, including sliders to change the temperature, and more closely mirrors the 8.0in infotainment set-up above it. Three of the latest USB-C ports - two up front and one in the rear - complete the changes. All these are standard on the Life model.

Everything looks very smart (at least until you smear finger marks all over it) and it largely works well, with handy Apple CarPlay or Android Auto app buttons lined up nearest to the driver. But it’s still a touchscreen set-up and it remains a concern about having to take your eyes off the road for too long to adjust it.

This is especially relevant to the new sliders controlling the temperature, as they’re a fiddle to change and also a bit low down. The net effect is that you spend too long glancing down. When the rest of the cabin is so well thought out, these aspects go against the grain of the generally superb German logic.

Other equipment includes three-zone climate control, phone connectivity, folding and sliding rear seats, and a smart-looking ‘Shooting Star’ cloth upholstery. It all adds up to a cabin that delivers what a buyer needs. It feels as well screwed together as any rival and delivers the blend of smart looks and practicality that Volkswagen has been excelling at for decades. Where you’d be scrabbling around for somewhere to put your water bottle in some rivals, in the Tiguan it just drops into the vast door pocket. 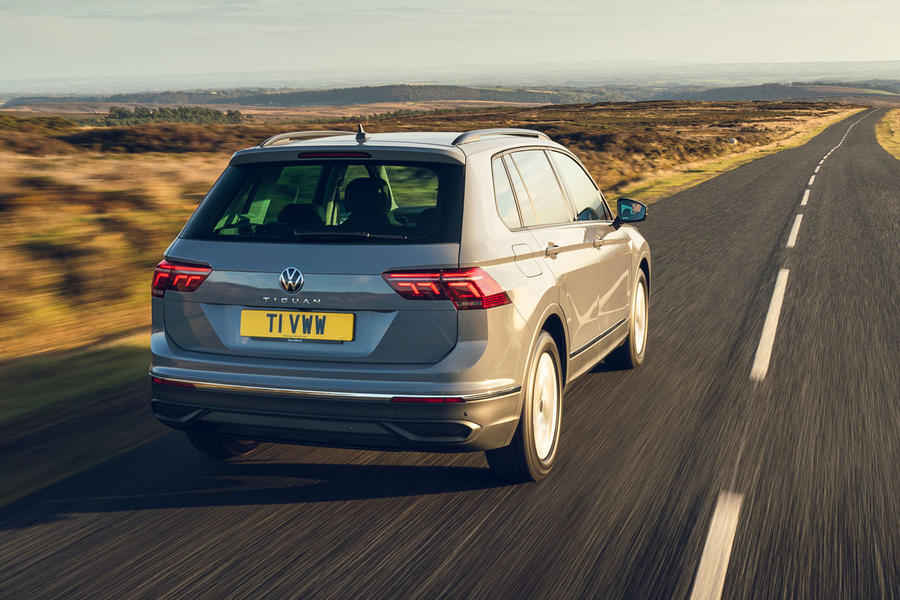 First, the good news. This is a perfectly acceptable family SUV. The Tiguan does everything you could want of it, in that typical VW style of being brilliant at coping with whatever you throw at it.

The engine is quiet and responsive, with enough punch from above 2000rpm. The Tiguan will do 0-62mph in 9.9sec thanks to its 148bhp and 184lb ft. Ford’s Kuga is 0.2sec faster, which is as near as makes no difference.

The 1.5 TSI has cylinder deactivation so will shut down two cylinders when it’s not under load. There’s a neat display that tells you when it’s doing this and it’s surprising how often that is. No wonder the 42.6mpg feels doable, again on the money with rivals.

But there’s the rub. The Tiguan is superbly benchmarked against the competition, but only that. It doesn’t excel in any particular area.

In some areas, in fact, it falls behind. Take the ride quality, for instance. Life Tiguans come on 18in wheels with 235/55 tyres, which should give enough sidewall to let it roll comfortably over sharper bumps. Plus, it comes with expensive multi-link rear suspension. But it fidgets more than you’d expect and with no pay-off in scintillating handling.

That’s partly down to the steering. Granted, this is a family SUV so we’re not looking for Ariel Atom-like levels of feedback, but the electrically power-assisted rack is numb and it makes the Tiguan a largely forgettable car to drive. 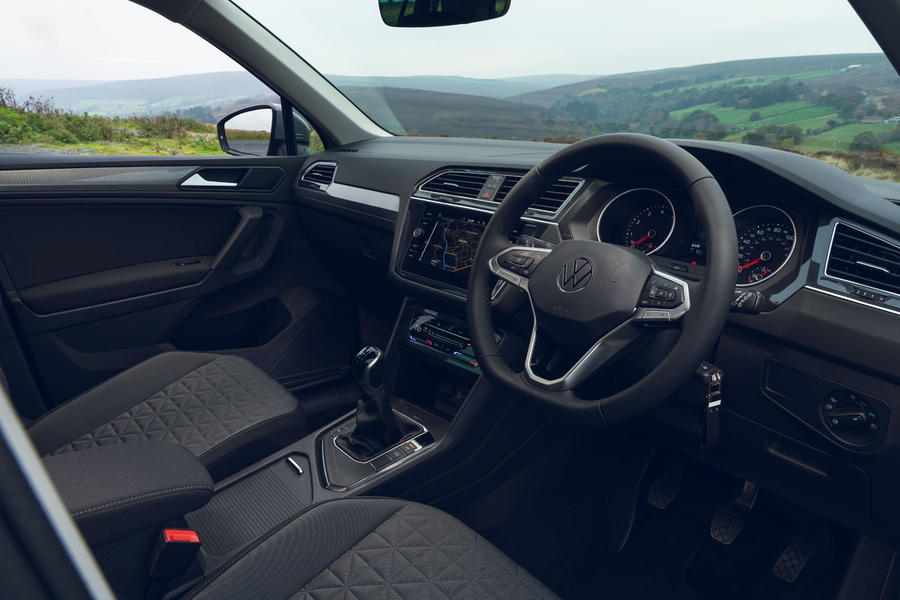 The simple truth about most VWs is that you can’t go far wrong with one. This Tiguan is no different: it’s a smart-looking, well-built car that will sell by the bucket load and largely justifiably so. If you told us you were buying one as your family wagon, we’d be hard-pushed to criticise too harshly.

But would it be a car that you could expect to get excited about? Sorry, there are others that are better, such as the Ford Kuga. 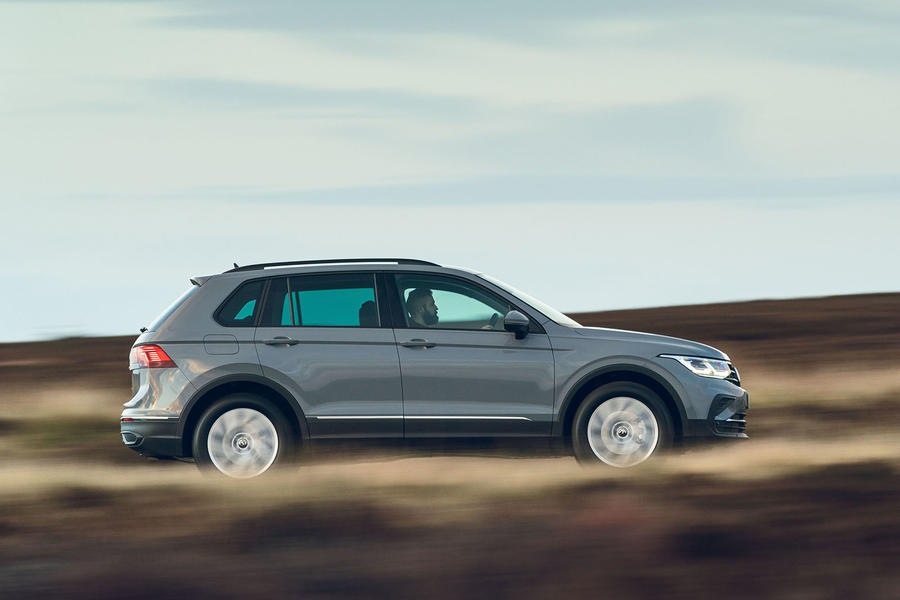 I could list all the reasons I bought a Kodiaq over this but I've not got all day, so it's probably easier to list all the advantages the Tiguan has over the Kodiaq. None. I cannot think of a single reason for choosing the older Tiguan over a Kodiaq but then they go and make this one worse. Any car that places well used functions like heating controls on a touchscreen is criminal, but to then place it so low down on the centre console beggers belief. The older tactile heater controls used throughout the VW group empire are one of the easiest to use on the market.

Oops, I forgot. The Tiguan has better cupholders.

Sat in a pre-facelift one last month and was disappointed. Nothing fundamentally wrong with it but it just felt underwhelming. Oh so grey and without a hint of character. By contrast the Qashqai I sat in felt like a nicer place to be. Better seats and a more inviting interior.

Sat in a pre-facelift one last month and was disappointed. Nothing fundamentally wrong with it but it just felt underwhelming. Oh so grey and without a hint of character. By contrast the Qashqai I sat in felt like a nicer place to be. Better seats and a more inviting interior.

My wife has got a pre-facelift one just before the "new" one came out but this was out of choice. VW did encourage her to wait but it wasn't really going to be worth it versus the timeline she was working to. She had a '16 plate 150 TDI R-Line manual and moved to the same spec but 190 TDI DSG and it is quite nice. More shove, the auto box suits it very well and the infotainment is more up to date than the 2016 model she had. The problem is you have to get an R Line to get a better looking proposition (and quite a bit of kit thrown in). VW have made the other Tiguans look quite ordinary so I do know where you're coming from.

I will pass thanks. The idea of a sport trimmed SUV in entirely incongrous.

I will pass thanks. The idea of a sport trimmed SUV in entirely incongrous.

No qualms from me on your thoughts - it's not my car! Just purely making the comparison to the regular Tiguans which in typical VW fashion look pretty dull!

Won't get anywhere within a sniff of 42mpg in real life. Dull. Kuga is now available with a hybrid power as will the new Tucson which is bristling with innovative technology, both make this old bus a dull choice.

"Felt doable" is not doing, how do you know what I have driven?...  Troll off somewhere else. You just embarrass yourself every post.

"Felt doable" is not doing, how do you know what I have driven?...  Troll off somewhere else. You just embarrass yourself every post.

Problem is you are such an idiot with your anti vag bias and continue to make statements which you cannot back them up. I believe the testers review and comments after driving the actually car are far most plausible than your anti vw bs. Do the world a favour and bin all your electronic devices.