From £23,0608
Plug-in hybrid Passat gets extra electric range and a lower price. Retains plenty of performance, with a multi-faceted, grown-up character that should suit a broad church.
Open gallery
Close

The eighth-generation Volkswagen Passat isn’t dead, and isn’t about to be killed off by the mercurial rise of the family SUV either, Volkswagen assures. It’s just been away for a bit, at least in some forms. And now that it’s back, its mid-life facelift coincides with the return of the version that must represent one of Wolfsburg’s better chances of commercial success in a business car market increasingly concerned with emissions reduction.

The Passat GTE plug-in hybrid was taken off sale last summer, when changing European emissions regulations rendered it obsolete. Now it’s returned with a bigger drive battery and 30 per cent more zero-emissions range, as well as some new driving mode functionality. It also benefits from the highlights of Wolfsburg’s wider update for the Passat range, which brings a new touchscreen infotainment system, some new engines and a few styling tweaks besides.

A five per-cent price slash is the sweetener expected to complete the hike in sales profile for the petrol-electric, ultra-low emissions derivative; the GTE accounted for only ten per cent of pre-facelift UK Passat sales at its height but should make up 25 per cent now. That won’t be enough to make it the UK’s biggest-selling Passat derivative: a couple of diesel-engined models will likely still outsell it, at least according to VW’s expectations – but that's mainly because the Passat remains a car very popular with company car drivers who haven't abandoned diesel in quite the same way that private buyers have. 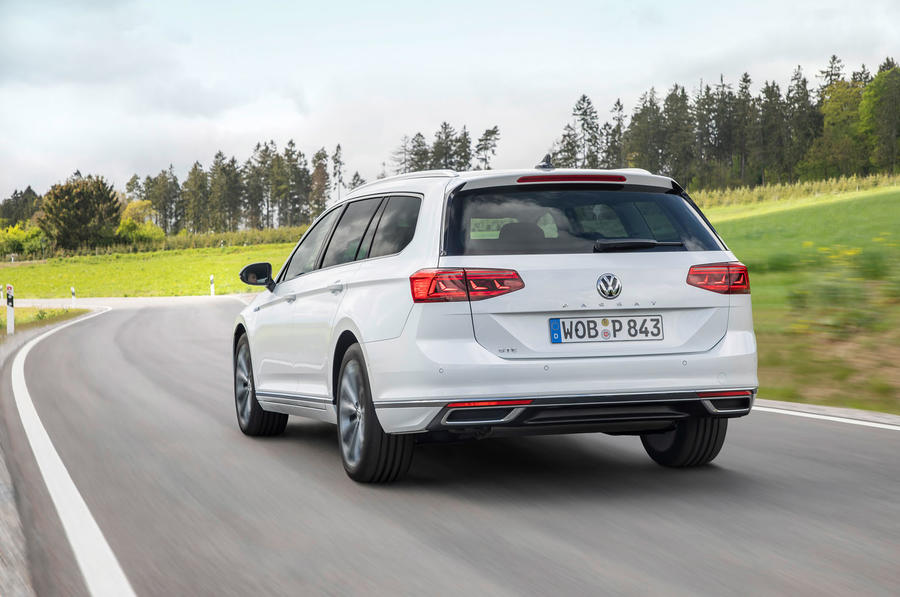 The styling changes aren’t the most daring or noticable, but this hardly comes as a shock. Under the bonnet, meanwhile, the biggest Passat development will come when VW’s new 148bhp 2.0-litre TDI Evo diesel engine arrives later in 2019, bringing active cylinder shutdown to the diesel side of the engine range. Meanwhile, the latest GTE’s mechanical makeup has hardly changed. According to a VW product expert, that’s because there’s little to be gained on real-world fuel economy or emissions by substituting the 1.4-litre turbo four-pot engine of the GTE’s hybrid powertrain for VW’s newer 1.5 TSI Evo – until, that is, there is the opportunity to also add 48-volt technology, a more powerful electric motor, or both at the same time.

For that reason, this car sticks with what we know – although a change in battery cell makeup has boosted drive battery power from 9.9kWh of gross capacity to 13. VW says that the bigger battery has boosted electric range from 31- to 43 miles on like-for-like terms. I suspect you’d do well to get more than 30 from it in real-world use, but there’s enough electric-only performance to easily get you up to 50mph without rousing the piston engine, so driving the car under electric power is certainly a pretty easy and pleasant thing to do.

Otherwise the Passat GTE remains, in the broadest sense, much the same practical, comfortable, sensible family car now as it was last year. While VW made a reasonable amount of noise about this car’s warm performance ambitions when the GTE sub-brand was first introduced, that badge feels like it’s being applied more as a trim level now. And so the Passat GTE isn’t daubed with go-faster styling touches inside or out. It rides comfortably. It’s as refined and easy-to-drive as any Passat when you want it to be, too. And yet the 215bhp and 295lb ft that its hybrid powertrain can make when you’re using ‘GTE’ mode still feels like more than enough to pique your interest in what else the driving experience offers.

Sadly, on outright handling dynamism at least, there still isn’t a great deal of depth or purpose to unearth in this car – although there’s certainly more than enough grip, body control and agility to allow you to enjoy a brisk stride on a flowing road. The GTE is front-driven and relatively heavy by compact estate car standards, and although VW’s smart componentry layout puts the car’s heavier drive battery low down and within the wheelbase, with the lighter fuel tank behind it, that’s not quite enough to make the car a really convincing driver’s pick.

Nevertheless, the six-speed twin clutch gearbox’s manual mode gives you an effective level of control over the powertrain when you’re in the mood. It also blends petrol and electric power cleverly when you’re using the car’s more laid-back driver modes to maximize real-world fuel economy – and, now with the help of data from the navigation system (assuming you’ve got a route plotted), it can best decide when to run the car on its electric motor, when to run it under petrol power, and in exactly what proportions to mix the two in order to deliver you to your destination as efficiently as possible.

It’s a shame, however, that the car’s battery regeneration behaviour can feel a little unpredictable from one moment and environment to the next. At times, the car coasts with no ‘regen’ at all, while at other times it hauls down your prevailing speed quite hastily on a trailing throttle – and it’s not always clear which you’re going to get next. The car’s lack of consistent brake pedal feel from one mode to the next is another notable bugbear. And drivability shortcomings like that aren’t VW’s style.

Most of the rest of the content of the Passat's mid-life update can be found among the minor details. The car’s new third-generation ‘MIB’ touchscreen infotainment system, due to feature on the imminent new VW Golf as well as here, seemed little different from the second-gen one to this tester. VW claims the navigation system has improved functionality and usability, though you still don’t get old-fashioned knobs for volume control or map zoom on the top-of-the-range system, and it still seems to require a few too many finger-prodding stages to adjust a driver assistance system or change an entertainment preference.

The car’s adaptive cruise and lane-keeping systems have also been updated. The former can now recognize and automatically adjust your speed to suit both permanent and temporary speed limits (which it does consistently well, although it feels like a strange phenomenon to have enacted on the car while you’re ‘driving’ it); while the latter can now recognize kerbs and grass verges, in addition to lane markings, as being the borders of a lane (although it still offers notably less assistance to keep the car centred in its lane than rival manufacturers’ equivalents, should you happen to prefer more help than less in that particular respect). 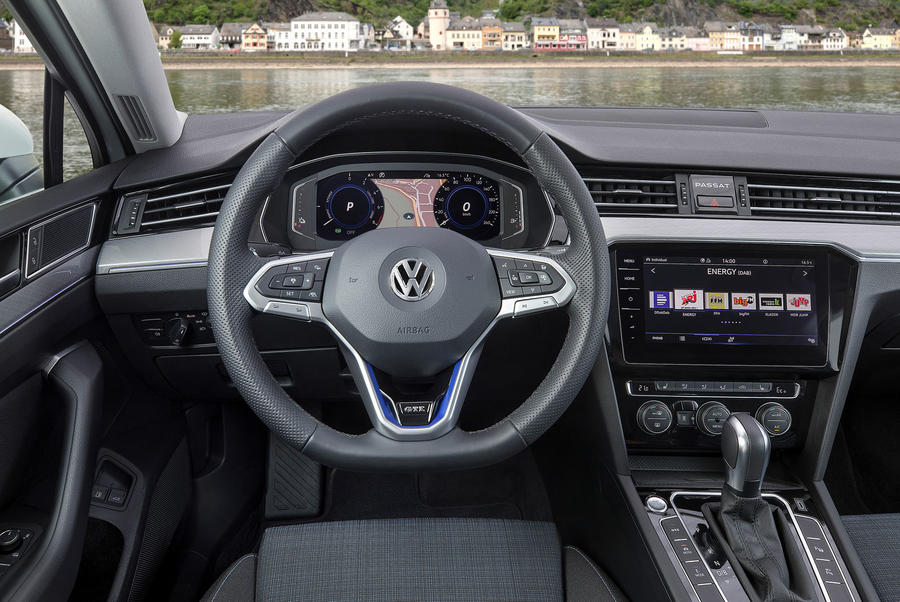 Restrained, smart, refined, spacious, solidly built, consistently well-finished and now quite well-endowed for onboard technology, the Passat looks set to continue to appeal to those who value its understated, progressive qualities as a family car and a daily commuter.

For anyone looking for greater fun factor, the GTE version only takes the car so far. But for its combination of (albeit limited) added pace and pep, allied with company car tax savings and the potential for even more impressive daily fuel economy than before, it deserves to continue to grow in popularity. 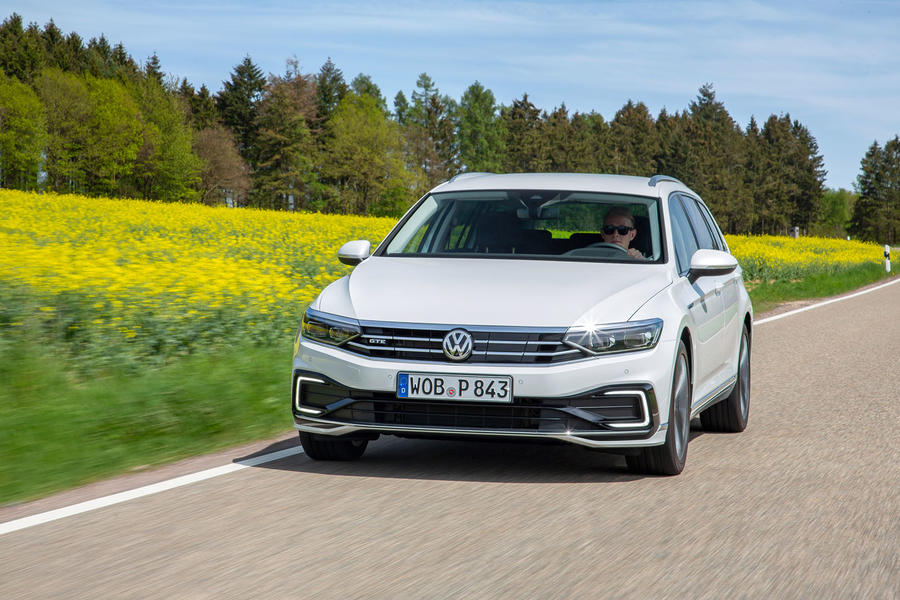 Pricing has been released to

Pricing has been released to the industry. P11D for this standard GTE estate is a fraction under £37k, so bang on Autocar's estimate. WLTP figures are unconfirmed, though.

How is it that this car can

How is it that this car can go on sale with WLTP figures ‘unavailable’? How efficent is it?

Well, it's a VW, this figures