From £36,3608
Updated plug-in hybrid saloon isn't the last word in driver engagement, but it is an impressively refined and comfortable
Open gallery
Close

If I were put on the spot and told to guess which of Wolfsburg’s many model lines laid claim to that particular honour, I’d have thought it were the Golf - but there you go. Turns out the Passat outdates that most ubiquitous of hatchbacks by a single year (give or take), having entered production in 1973 - only slightly ahead of the car that would go on to define what is now being referred to as Volkswagen’s 'second era'.

Anyway, since then, the Passat has achieved considerable sales success (not least in Europe) across its eight generations, with some 30 million examples built to date. Now, the latest model has been subjected to a mid-life update - the result being the so-called Passat Mk8.5.

And of all the variants available, it’s the Passat GTE that’s arguably been nipped and tucked to the greatest extent. In fact, these tweaks, along with shifting consumer habits that have placed lower emissions and greater efficiency much further into the limelight, have led Volkswagen to predict the plug-in hybrid model will now account for 25% of all Passat sales. Previously, that figure was just 10%.

So, what’s new? Well, as with all new Passat variants, the GTE benefits from Volkswagen’s latest raft of active safety systems as standard, while the new MIB 3 infotainment software makes its debut.

Changes specific to the GTE include a larger (13kWh) battery, which increases the WLTP-certified zero-emissions range by some 38% to 33-36miles, depending on bodystyle, yet the list price has dropped by an average of £2300. So, not a bad innings all round. There's also a newly configured hybrid driving mode that works in conjunction with the sat-nav to conserve electric energy so that it can be deployed as you approach your urban destination.

Those modifications aside, it’s business as usual. You still get a turbocharged 1.6-litre petrol four-pot engine that, along with an electric motor, drives the front wheels via a six-speed dual-clutch automatic gearbox. Suspension, meanwhile, is still by way of MacPherson struts up front and a multi-link arrangement at the rear. Adaptive damping is available as an optional extra. 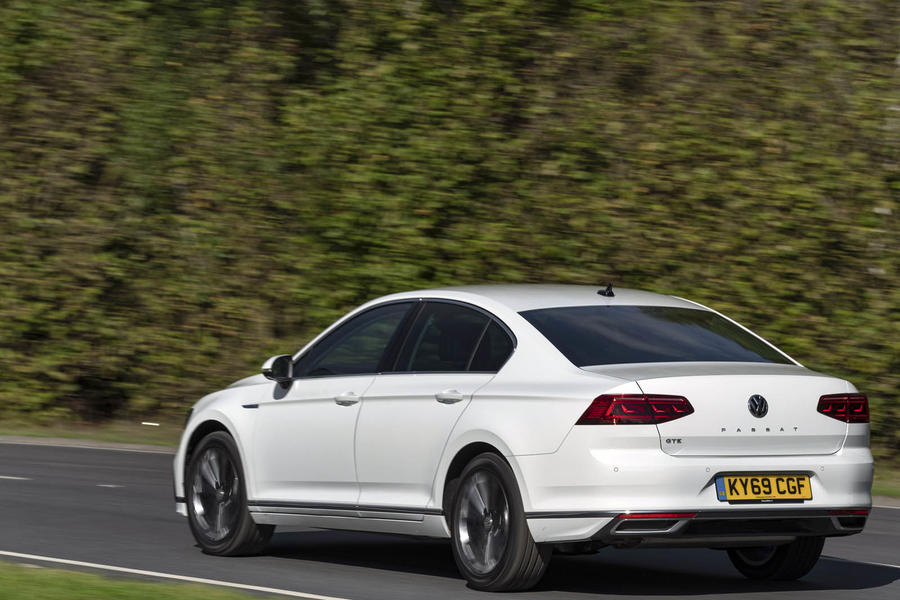 Volkswagen says that this new Passat GTE moves in the same circles as the likes of its GTI-badged hero models. But really, if you bought one thinking you’d be getting a performance car with a capacity to provide similarly fizzy levels of entertainment, you’d probably come away just a shade disappointed.

This isn't a particularly stimulating car to drive. In fact, it’s not even a particularly stimulating car to look at. Handsome, yes, and with an appealing sense of well-to-do-ness about its sensible proportions, but exciting? Nah, not really. But that’s okay, because if you cast to one side any expectations or visions of performance grandeur those three letters might arouse, there’s still a deeply likeable car beneath it all.

Let’s start with that electrified powertrain. Yes, it lends the Passat GTE a respectable turn of pace that enables you to comfortably despatch country lane-overtaking manoeuvres with little stress or bother. But it’s how it operates when you’re simply smoking about that’s most impressive.

Provided there's enough charge in the battery, step-off is impeccably smooth. You roll forward on a gentle wave of initial electric torque and, provided you don’t pin the throttle, can continue to waft along in silence right up to 87mph. More enthusiastic inputs will bring the engine into play, but even so, the manner in which it steps in is largely seamless.

At open road speeds, the plush yet unpretentious interior is well isolated enough to dampen your awareness of the fact the turbo four-pot is even running. Put your foot down and it will make its presence known, but it doesn’t become overbearing or lacking in refinement even as the tachometer spins up towards the redline. Admittedly, it’s not the most tuneful, and it does feel a mite strained towards its top end, but its distant nature means it’s far from grating.

The Passat GTE rides pretty well, too. On its standard, passively damped sports suspension, there’s a stern edge to its dynamic character, but it’s not so taut that it feels unyielding or harsh - far from it. Undulating surfaces are dealt with in a mature, forgiving fashion, while impacts from ruts and bumps are, for the most part, rounded off nicely. Head-toss is amplified at low speeds on particularly hairy surfaces, but it’s still far from uncomfortable.

Add in Dynamic Chassis Control with its adaptive dampers (£895) and things improve further. Sport mode tightens that close sense of control over the Passat’s primary ride, but it’s in Comfort mode where it’s at its most enjoyable. With its dampers slackened off, the Passat strikes a very likeable balance between body control and ride compliance. Given the fact that it still handles corners in a confident but uninspiring manner when set up as such, it wouldn’t be a stretch to presume you might just leave it in Comfort all the time. Or at least configure the Individual mode to reflect this, anyway. 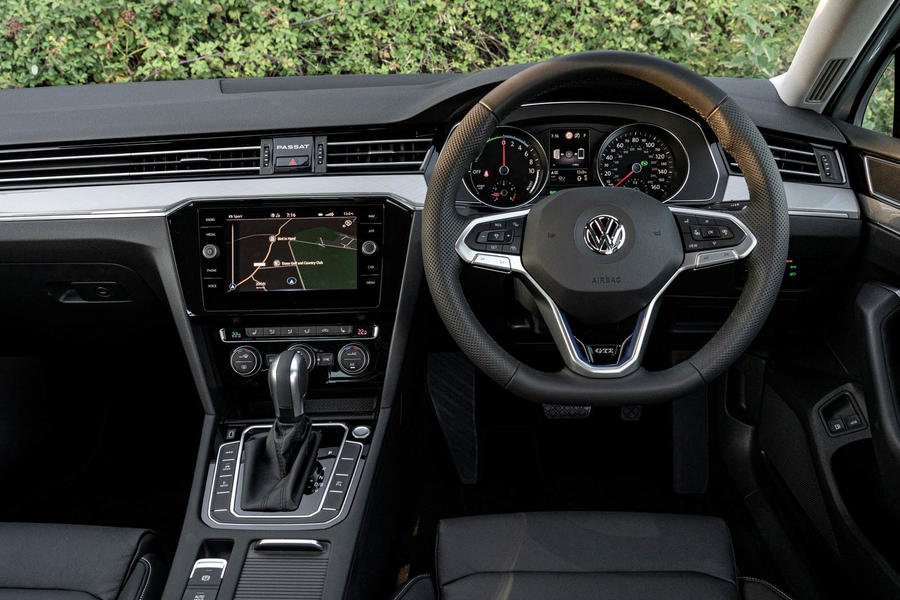 If you prefer your plug-in hybrid saloons (or estates) to be comfortable, refined and completely unpretentious, and if you can afford an admittedly rather steep asking price of £38,940, you’ll probably be well served by the Passat GTE Advance. Not only do you get leather upholstery, heated seats, Volkswagen’s sharp 9.2in Discover Navigation Pro infotainment suite and more all thrown in as standard, but it’s usefully practical, too.

It won’t engage in quite the same way the BMW 330e can and isn’t as opulent as the Mercedes-Benz C300de. But if you want to fly under the radar in quiet, comfortable refinement, it certainly has plenty of merits. 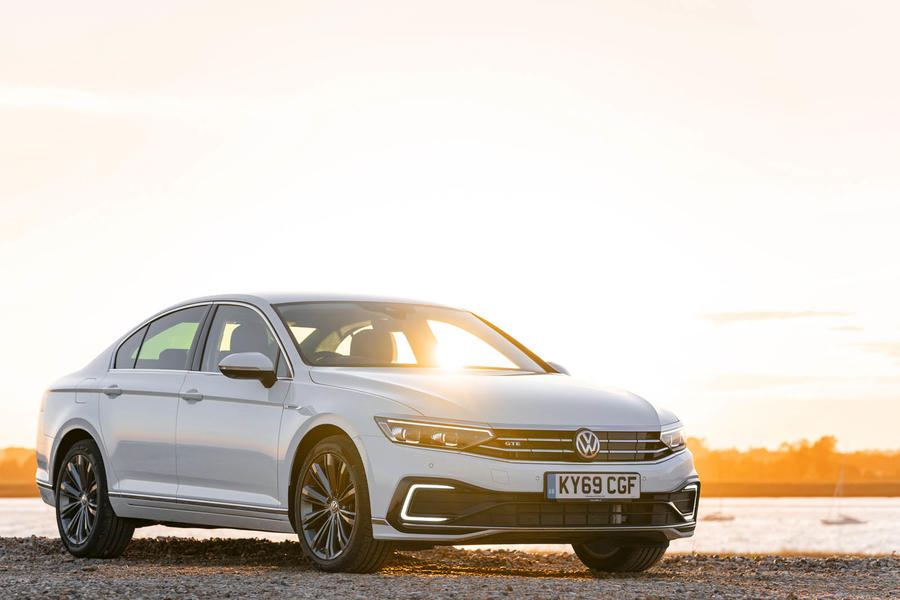 Wow, I really like this Car I have read your blog it's very interesting to keep sharing. inspiredjackets

very posh car that should do

very posh car that should do well in todays market quite impressed by looks and verdict.

"Those modifications aside, it’s business as usual. You still get a turbocharged 1.6-litre petrol four-pot engine"