BACK TO ALL NEWS
Currently reading: Volkswagen Passat GTE plug-in hybrid prices and specs announced
UP NEXT
British GP: 70 years of racing magic at Silverstone

Prices and specs for Volkswagen's plug-in hybrid Passat GTE have been announced; it costs from £36,525 before a £2500 government grant
Share
Close
Share story

Volkswagen’s Passat GTE plug-in hybrid will arrive in showrooms this month, costing from £36,525.

Read our review of the Volkswagen Passat GTE here

All models are powered by a turbocharged 1.4-litre petrol engine and an electric motor, which give a combined output of 215bhp and 295lb ft of torque.

The car runs by default on electric-only 'E-mode', with 113bhp, 243lb ft of torque a range of up to 31 miles from a lithium-ion battery mounted under the rear seats.

The petrol engine kicks in when the battery is depleted. At this point, the Passat GTE runs as a full hybrid, recharging the battery using kinetic and braking energy. The driver can also select Battery Charge mode to save up electric power, for example for electric city driving at the end of a petrol-powered motorway journey. GTE mode runs both systems in tandem.

With both petrol and electric power engaged, the Passat GTE will go from 0-62mph in 7.6sec and reach a top speed of 140mph. It comes as standard with a six-speed DSG gearbox that features a third clutch, which disengages at the appropriate time to harness kinetic energy and increase efficiency.

The Passat GTE can have its battery charged from a home electricity supply in about four hours, 15 minutes, or using a dedicated 3.5kW wallbox in around two and a half hours.

The specifications of the Passat GTE are generous, and based on the Passat GT. Standard equipment includes LED head and tail lights, Alcantara and leather seats and a GTE-specific blue-stitched gear knob, as well as adaptive cruise control, parking sensors and Bluetooth connectivity. The Passat GTE also comes fitted with VW’s Car Net e-Remote system, which lets you control several functions from a smartphone, such as the locks, climate control and charging settings.

Visually, you can spot a Passat GTE by its C-shaped LED running lights and a blue line running across the radiator grille, as well as a redesigned front bumper and 18in alloy wheels. 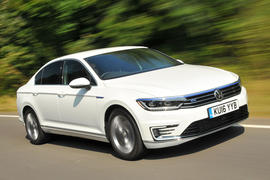 Volkswagen treats the Passat to a plug-in hybrid makeover, just as rivals like the Audi A3 e-tron, Mercedes-Benz C350e and BMW 330e are beginning to make their impact on the segment

It's been a long time coming

4 August 2016
I'm very glad I didn't wait for one when they first announced its imminent arrival over a year ago.

4 August 2016
You say, "It comes as standard with a six-speed DSG gearbox that features a third clutch, which disengages at the appropriate time to harness kinetic energy and increase efficiency."

Do you actually understand this stuff Autocar or do you just regurgitate the manufacturers PR blurb?