From £29,0358
Combination of a diesel engine and electric motors makes the C300de hugely capable in all environments
Open gallery
Close

There’s an incredibly strong chance that Mercedes-Benz might just be on to something big with its new C300de.

You’ll be well aware of the battering diesel cars have been subjected to over the past 18 months or so. Both government and mainstream media have increasingly been pushing the idea that oil-burners are bad news for the general public’s health - particularly in busy city centres - despite the fact that any automotive engineer worth their salt will tell you that the latest diesel engines are cleaner, less polluting and more efficient than ever before.

But what if your diesel car was capable of running on nothing but electricity in these built-up areas? And what if, once you’ve left the confines of the urban sprawl, you could rely on the superior range, low CO2 emissions and effortless torque of its engine to get you to your final destination, free from any associated guilt about your choice of powerplant?

That, essentially, is exactly what the C300de sets out to allow you to do.

Like any other plug-in hybrid, it combines an electric motor – here capable of running the car on electricity alone for around 30 miles, courtesy of a 13.5kWh battery – with an internal combustion engine. Unlike in most other plug-in hybrids, though, that engine is fuelled by diesel.

It’s a 2.0-litre, four-cylinder unit that develops 191bhp and a reasonably meaty 295lb ft of torque. The electric motor, on the other hand, makes 121bhp and 325lb ft. Combined, they give the C300de 302bhp, while torque has to be limited to 516lb ft, most likely so as to not overwhelm the nine-speed automatic gearbox.

Not only does this allow Mercedes to make the rather impressive claim that, in the estate guise you see before you, the C300de will be able to do 0-62mph in just 5.7sec, but also that it should also be capable of achieving an average fuel economy figure of 177mpg and CO2 emissions as low as 42g/km, albeit under NEDC conditions.

Now, plug-in hybrids have been making similarly impressive economy claims for some time. And while they might be able to rely on their ability to travel on electricity alone to bring down their consumption and emissions figures in the city, show one a prolonged stretch of motorway and chances are its petrol engine will struggle to return a figure that’s anywhere near those on-paper claims. The Range Rover P400e, for instance, can supposedly manage 101mpg, but I spent a day in one a few months back and the best figure its trip computer could conjure was 23mpg.

Anyway, while some scepticism is always recommended when looking at these things, the point is that the C300de, with its ability to switch to diesel power at the drop of a hat, should be able to come much closer to matching those claims than its petrol-powered contemporaries. 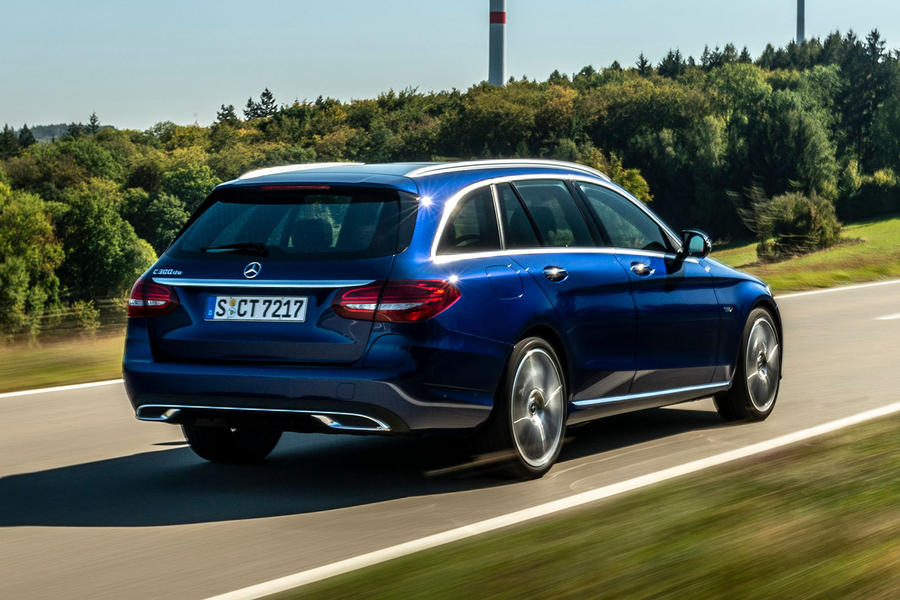 The car certainly made a good effort of it on the test route around Stuttgart, which combined plenty of time in heavy stop-start inner-city traffic with a few stints at speeds closer to what you’d be doing out on the motorway.

While it didn’t manage that hallowed 177mpg figure, its trip computer was still showing an average consumption figure of around 90mpg at the end of the route. That was with the diesel engine being the sole source of power for a good proportion of the total trip, too.

However, while it proved to be impressive from an economy point of view, it’s not an engine you’d be willing to label a glowing example of refinement. While there are certainly diesel units out there that are far gruffer, the C300de’s has a distinctly agricultural edge to its timbre when under load. Even at a steady cruise, its humming away in the background was noticeable, although admittedly I may have become more sensitive to any sound it made after an extended period of running about on battery power alone.

The manner in which the two engines work together is impressive, though. Leave the C300de in its standard Hybrid driving mode and the electric motor provides smooth, linear acceleration off the line. Take off with a bit more urgency and the diesel engine will step in in a largely seamless fashion, with both motors providing that sizeable slug of low-down torque to get the car up to speed in very swift fashion indeed.

The auto ‘box works well, too: you largely won’t notice it working away to swap cogs under the more laid-back driving style that our busy urban route demanded, although whether the same would be true if you were to drive with a degree more enthusiasm, I’m unable to say.

As for the way the C300de rides, it’s a bit of mixed bag. It's certainly a comfortable car; there’s tight, pliant body control here that allows it to deal with undulating surfaces with plenty in the way of confidence. But lumps, bumps and other imperfections in the road’s surface make it lose a touch of its composure, at times giving the impression that it's stumbling over, rather than ironing out, these less-than-stellar patches of Tarmac.

Body roll through tighter corners is well managed, too, and the steering, while not exactly bristling with feel, is pleasingly direct and nicely weighted.

The interior, meanwhile, maintains the same sense of opulence that is common to all C-Classes'. Ambient lighting and wood panelling look the part, although the latter does feel a bit disappointing to the touch, while the leather seats of our test car were both comfortable and supportive.

The C300de goes without the new dual-screen dashboard layout of the new A-Class, though, and its system, while easy enough to operate, isn't the slickest system on the market - particularly next to those offered by Audi and BMW. In a general sense, though, you’re in no danger of feeling short-changed. 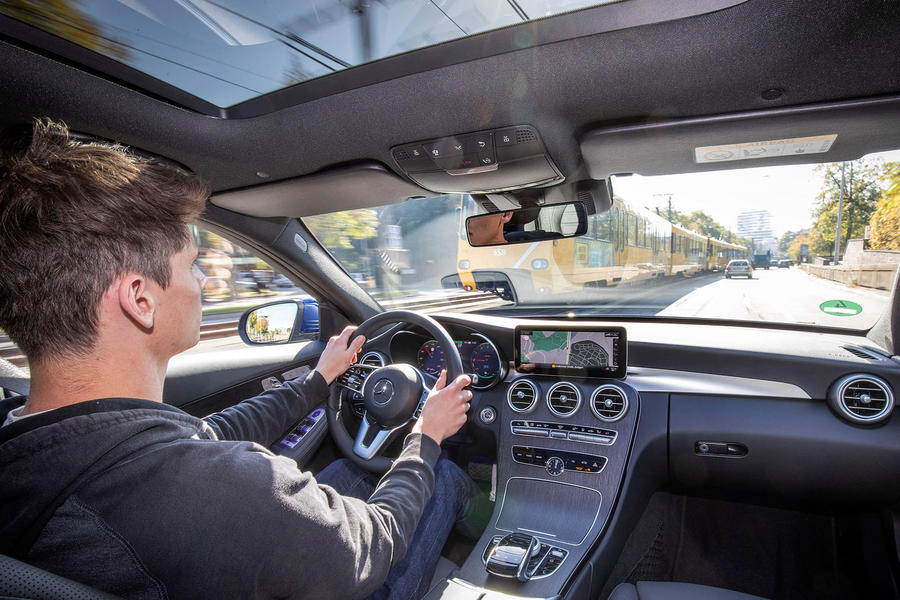 With the mid-2019 launch of the C300de still some way off, prices are yet to be announced, although I’m not hugely confident that they’ll be particularly cheap. The regular C300d Estate will set you back at least £41,400, so I don’t think it’d be entirely unfair to presume this new diesel-electric variant will likely add at least a few thousand pounds on top of that figure.

This will likely mean that the C300de will only make financial sense for a reasonably small number of rather deep-pocketed individuals who know they’ll likely cover a fairly high number of miles on an annual basis. But that’s generally the case with diesel-powered cars anyway, isn’t it? Yes, they don’t make sense for the driver that’s only ever going to use one for the school run or the morning commute, but there are those who benefit from them greatly.

If combining a diesel engine with an electric motor goes some way to reversing the damage that’s already been done, surely that’s a good thing. 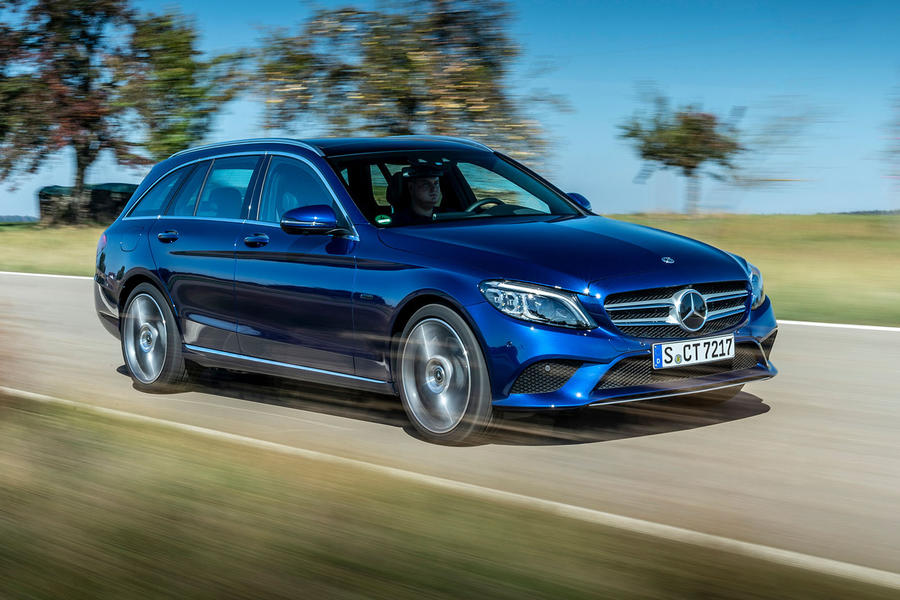 The article suggests comparing this to the existing 300d. That car uses a different output engine so is not a direct comparison.

This 300de uses the same engine as the 220d but with motors and batteries attached, so comparing to that c.£37k starting point would be fairer rather than on naming strategy.

I thought PSA were first with a diesel hydrid? 408, 3008 and DS5. Their 4-cylinder diesels are far smoother than MB, but they have decided not to develop this (or any diesel) any further. MB just playing catch-up!

Diesel Hybrids are the answer . . .

. . it's just a shame M-B didn't use the wonderful new six-cylinder diesel they have developed.  Perhaps they will when it comes to the E-Class.  Still, you can buy a six-cylinder diesel hybrid now, if you want - I've got one.  It's an Audi Q7 eTron but beware, they weigh in at nearly 2.5 tonnes.

Depends on the question

Q7 - Not if you want a 7 seater as having a battery costs 2 seats. Also costs £70k so with  fuel savings of £500 a year (not including cost of going back to pick up those 2 passengers left behind) for the average private motorist it'll take several years to get the money back, if ever!

Q7 - Not if you want a 7 seater as having a battery costs 2 seats. Also costs £70k so with  fuel savings of £500 a year (not including cost of going back to pick up those 2 passengers left behind) for the average private motorist it'll take several years to get the money back, if ever!

I bought the Q7 eTron used, ran it for a year and got pretty much all my money back.  I did 20,000 miles at an average of 60 mpg, while not hanging around.  That's £1,000 saved on fuel and probably three times that saved on depreciation compared with a non-hybrid.