It’s the revised VW Up GTI: a car made slightly pricier but no perkier to drive. That’s the short version of what has been done to Volkswagen’s smallest hot hatchback for the 2020 model year. Fans needn’t fear that the overall appeal of the car has been altered, though: it has mostly just been preserved for another showroom stint.

The hot Up attracted a long waiting list after its launch in January 2018, which VW struggled to satisfy with a limited right-hand-drive car allocation. That, combined with a looming WLTP emissions deadline, meant the old car was effectively withdrawn from sale in April 2019.

Now that it’s come back, this is one of the first VWs to get the firm’s redesigned brand logo. The lettering is slightly slimmer, although the colour scheme is the same chrome-on-black affair as previously.

Otherwise, the car is exactly as it was outwardly, with those double side stripes, 17in alloy wheels, black mirror caps and that impish little black bi-plane spoiler being the distinguishing features. Now, as before, I’d say it has just enough visual attitude: sufficient to set it apart at second glance, but not so much as to risk looking daft or to over-promise about the driving experience it offers. Nicely judged. 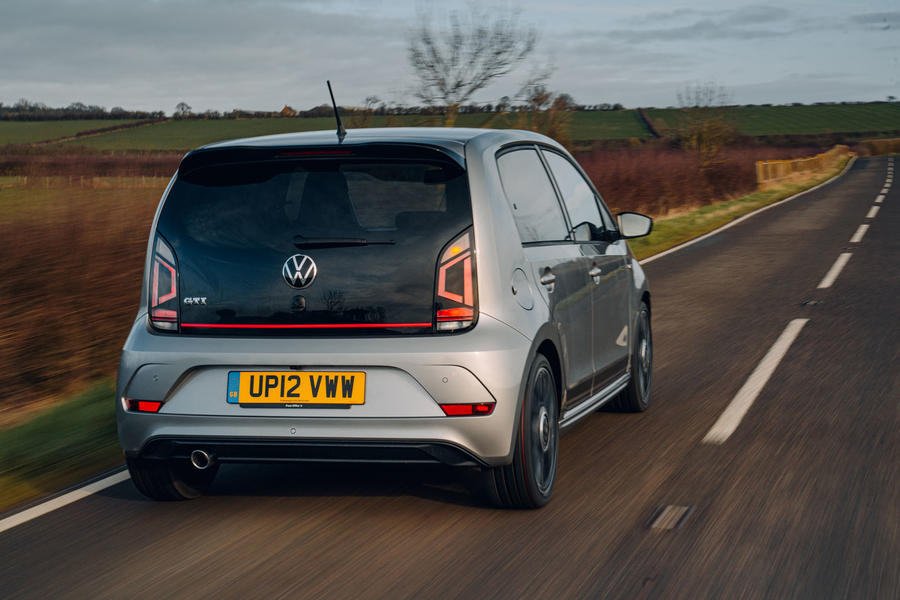 On the inside, the car remains mostly as it was, too. Those GTI-trademark Jacara checked cloth seats have been retained, likewise the attractive red-spotted dashboard decoration. Alongside other versions of the car, the GTI gets a camera-based active lane-keeping system (with a handy button that, mercifully, makes it easy to turn off) as well as curtain airbags as standard. The 5.0in ‘composition colour’ infotainment system is retained. It’s light on features and functionality but is cleverly partnered with a vice-like phone mount so you can fix your smartphone on the dashboard and use all of the navigation and connected entertainment features thereon. A no-nonsense, bargain-basement driver’s car really doesn’t need more.

Nothing has officially been changed about the Up GTI’s driving experience – nothing that VW has felt the need to communicate, at any rate – and that’s mostly to be celebrated. This makes an amusing feeder hot hatchback partly as a result of its limitations rather than in spite of them and it has character in abundance.

Three years ago, VW lowered and stiffened the standard car’s suspension for this application, widening the axles tracks only by fitting 17in alloys with less positive wheel offset than the standard car’s. It certainly didn’t over-endow the car with outright grip or body control. As a result, outputs of 114bhp and 148lb ft felt like more than enough, in 2018, to enliven and examine the car’s chassis on a proper road - and they still do.

The stiffness of the original version’s suspension may have been tempered slightly, and the associated vertical body control calmed down just a smidge – but this remains a busy, bustling B-road car. It doesn’t jounce and pitch quite like the original, but it still feels disarmingly Tiggerish when you put some speed, and a few bumps, into the mix.

Being so short and light, the car changes direction very freely, although with a little bit of roll and only a medium-high grip level. A more typical hot supermini feels more adhesive and naturally agile, but the Up communicates its limits well and makes driving up to them more engrossing than many would think.

The car’s 1.0-litre turbo triple has lots of mid-range poke and a likable willingness to work. The WLTP retune doesn't appear to have harmed it, then - although it hasn't enhanced it, either. Anyone who remembers the ‘pocket rockets’ of the 1990s will wish it revved more keenly and, probably, that VW hadn’t felt the need to digitally enhance its audible character quite so much.

While we’re griping, it’s also a shame that VW didn’t take the opportunity to make the ESP system fully switchable. The way that it kills your throttle control stone dead as soon as you left-foot brake is regrettable. Likewise, the firm could have better-defined the shift quality of the six-speed manual gearbox, which remains a bit imprecise. Then again, neither foible is enough to dilute the fun on offer too much. 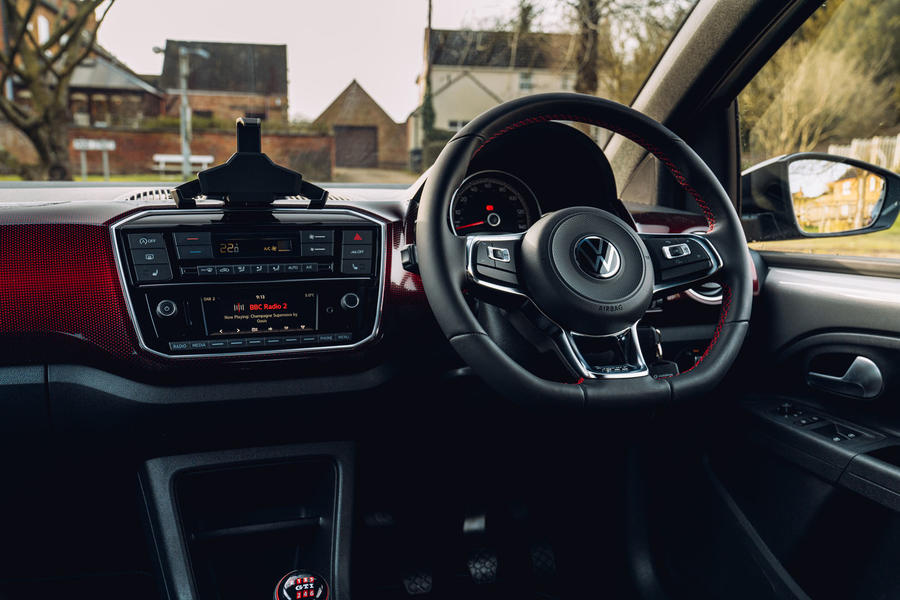 Although there’s still clearly a little bit of room for improvement for a future facelift, I say absolutely; grab one while you can and enjoy it while they'll still let you. Because, who knows, maybe there won't be another facelift.

There’s a whole lot of motive charm and driver appeal being offered here, for what still looks like a really appealing price. In fact, the Up GTI is exactly the kind of car that other manufacturers are ruling out of their product plans right now in order to drive people towards range-topping electrified options. Here’s hoping very much that it continues to show them the error of their ways. 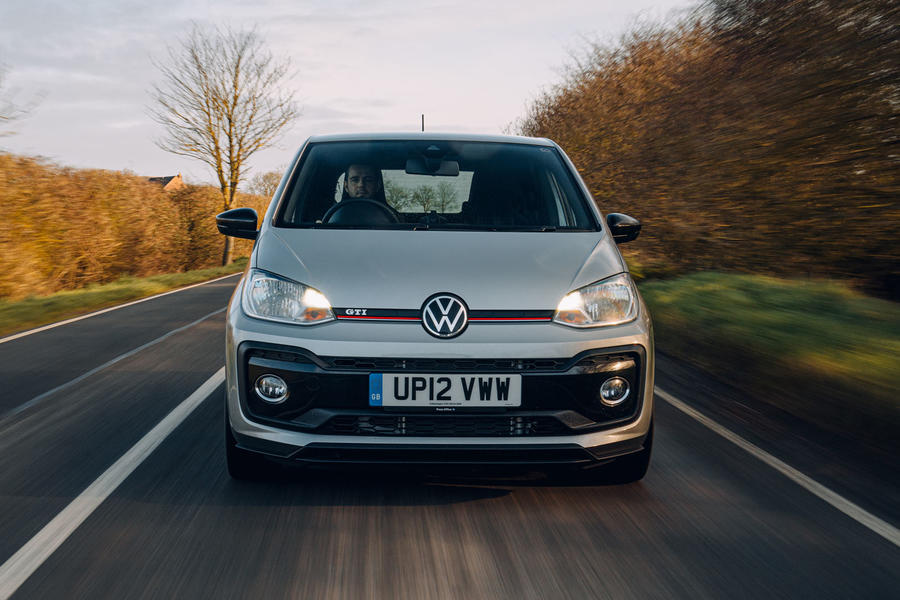 What are you on about Matt ?

What are you on about Matt ? -"Bi-plane rear spoiler", its deffo only mono plane - theres only one ! "Bi-plane" would be like,, for instance a Sierra XR4i.

Now it's available again, they've slapped a huge price increase on it.....and this article seems to be justifying that for VW by saying most manufacturers are turning away from making cars like this any more:

"...for what still looks like a really appealing price.." Nonsense!

Well the reason for me even considering this tiny, compromised, relatively slow car was because it was supposed to be a cheap (ish) warm hatch. If I'm going to spend this kind of money, I might as well find a bigger, better appointed car with similar performance from a mid-spec trim level instead! Or haggle a huge discount on a Kia Picanto GT-Line which is bound to be more reliable and cheaper to run.

£14k, 3 weeks pay difference (and you'd get the money back come sale time). plus, alot slower.

£14k, 3 weeks pay difference (and you'd get the money back come sale time). plus, alot slower.

You mistyped, should have been benefits, rather than pay. Fool.

Lane assist button, agree with the journo and in my opinion just one more buton, along with the stop/start one, to press at the start of every journey