The Vauxhall Insignia is a car we’re all pretty familiar with by now. Since it came on stream last year, we’ve tried Luton’s handsome flagship out in all manner of flavours: petrol, diesel, fastback, wagon - the list goes on. We’ve also been running one as a long-termer for the best part of a year - of which you can read more about here.

Until very recently, the Insignia GSi - launched earlier this year - was the most powerful model in that comprehensive line-up. However, the implementation of stricter WLTP emissions and fuel economy test procedures at the start of the month, as well as what Vauxhall calls a “rationalisation” of its entire model line-up, has resulted in the petrol-powered GSi being dropped from sale (although you can still buy the 207bhp GSi diesel).

The consequence of this is that the car you see on the page before you is now the most powerful petrol-engined Insignia you can buy, even if those bragging rights are down to a bit of a technicality.

Well, a technicality and a brand new engine. The powerplant in question is a reasonably small turbocharged 1.6-litre unit that develops a zesty 197bhp and 221lb ft of torque - all of which is sent to the front wheels via a six-speed manual gearbox. With this new motor at its nose and in practical Sports Tourer (read: estate) guise, the Insignia is capable of hitting 60mph from a standstill in a claimed 7.7sec and continuing to accelerate right up to a top speed of 144mph. That’s not exactly mind-bending performance, but it’s still only sixth-tenths off the GSi estate’s 0-60mph sprint time.

Other than the new engine, it’s business as usual for this latest addition to the Insignia line-up. It sits on General Motors’ E2 platform, with suspension by way of MacPherson struts up front and a multi-link arrangement at the rear, and passive dampers all round.

As for the question of how much it costs, prices for the 1.6-litre Insignia Sports Tourer start at £25,610, which will get you an SRi VX-Line Nav model complete with features such as satellite navigation, 18in wheels, a sporty VXR bodykit and climate control. Pretty much everything you’d want, in other words. Our £28,645 Elite Nav-specification test car added 20in wheels, Intellilux LED matrix headlights and heated front seats, among other things. 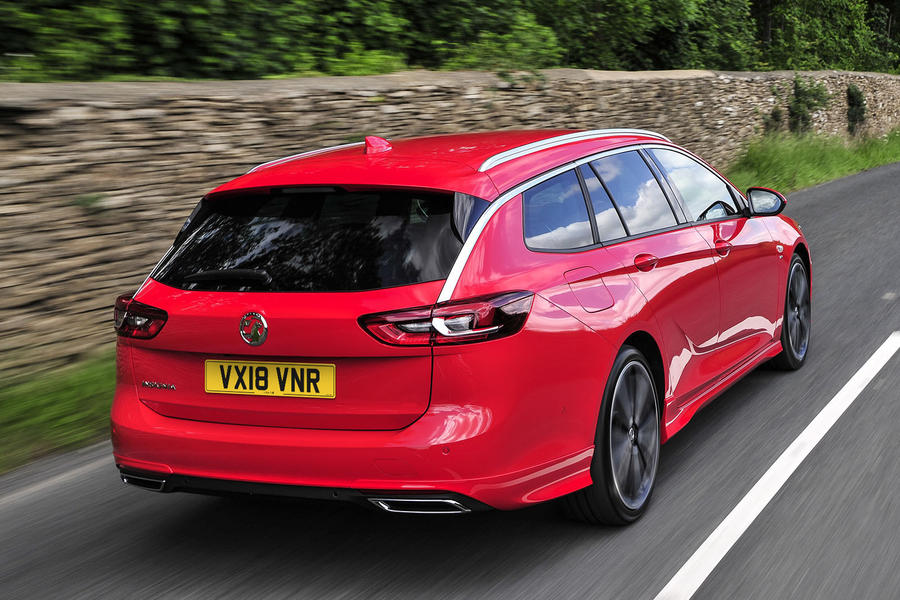 While you wouldn’t label this particular Insignia as being a particularly sporty motor, the addition of the new 1.6-litre engine does lend it a respectable turn of pace. The climb through the rev range is impressively smooth, and while the accompanying soundtrack isn't particularly endearing or exciting, it’s still a long way from what you’d consider harsh or grating.

Provided you keep the crank spinning at about 2000rpm, it’s a reasonably responsive unit, too. Plant your foot here and it’ll pick up the pace in a gradual fashion, although it seems to properly wake up from about 2500rpm or so. Because its 221lb ft is so easily accessible, the need to interact with the six-speed manual gearbox is reduced somewhat as well. Not that this will prove to be a turn-off, mind, because it’s not the most tactile ’box to interact with.

As for its on-road manners, the Insignia majors on stability and comfort, as opposed to outright athleticism. Granted, on 20in wheels there is a degree of intrusion from potholes and bumps in the road, but its primary ride comfort is impressive. Its suspension works to smooth out compressions with little bother, although vertical travel over crests could perhaps be marginally tighter.

Through faster bends, the Insignia remains planted and secure, with body roll arriving in a progressive and predictable fashion. There’s abundant front end grip, too, and if the car's nose does continue to press on, a lift of the throttle is all that’s required to tighten your cornering line. At roughly 2.7 turns lock to lock, the steering isn’t particularly quick, but it's weighted nicely and allows you to point the Insignia’s front end where you want with a reassuring degree of confidence.

Being an Insignia Sports Tourer, the cabin is predictably cavernous. You’d have to be exceptionally tall to be in need of additional leg or head room in the second row, and while the 560-litre boot isn't class-leading, there’s still enough space here to accommodate bulkier items with little in the way of hassle. 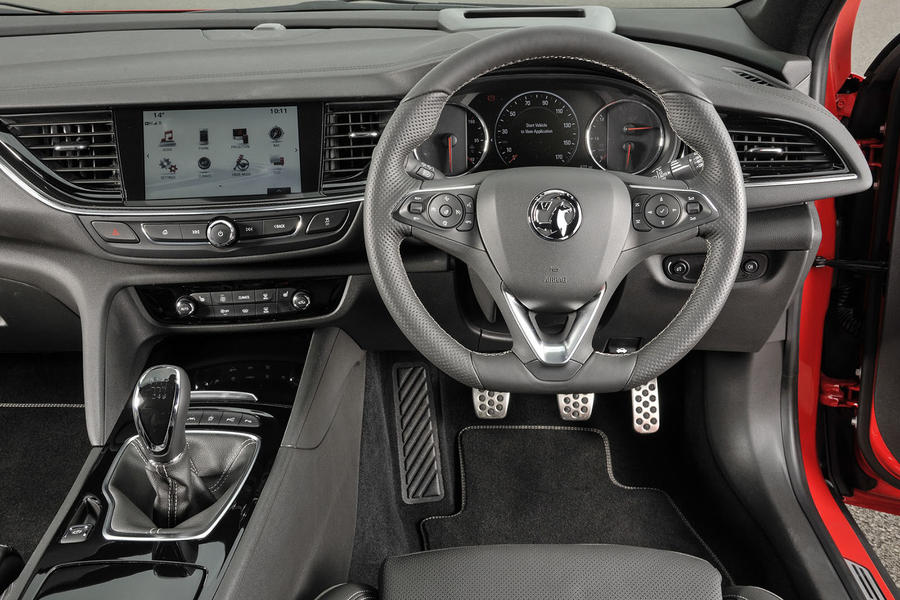 Credit where credit’s due: the Insignia ticks all the right boxes as far as being a comfortable, safe and practical family wagon is concerned. A claimed combined fuel economy figure of 42.2mpg, combined with its relaxed on-road manners and usable interior, make it well suited to long-distance excursions, while its sensibly weighted controls and decent visibility mean you can dawdle around at urban speeds without wearing yourself out.

And while our Elite Nav test model isn't the one to go for, due to its slightly elevated price, the standard SRi VX-Line Nav still offers all of the above, only at a more reasonable price point. 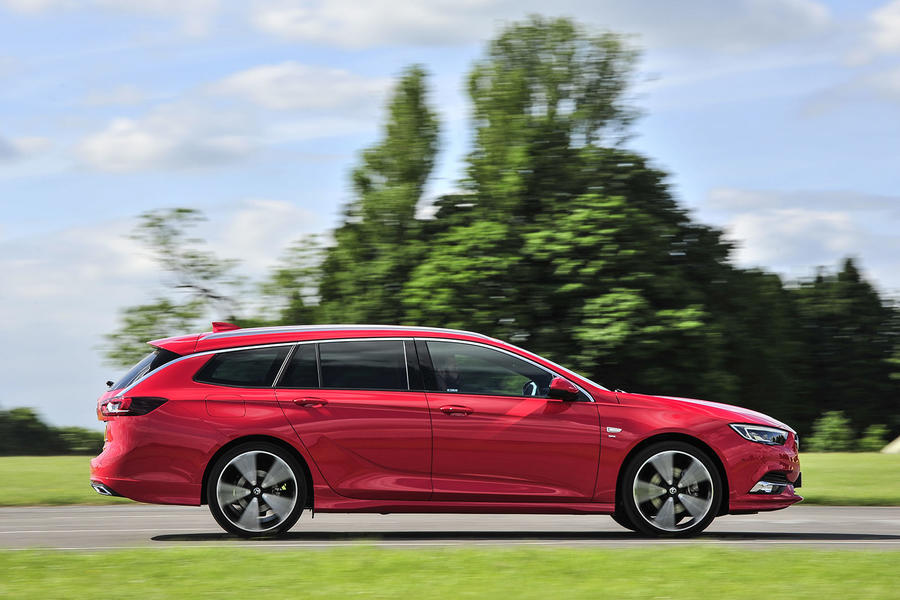 Isn't this the same 1.6 turbo that has been in the Astra for the last couple of years?

I do feel a bit sorry for you Poms sometimes

Mentioned about gearbox choice before

That'll be annoying, isn't that only available as an Automatic in the 308 GT?

4 October 2018
How is one's understanding of the world enhanced by following the word 'price' with the word 'point'?

People used not to do it and I don't remember being lost in a fog of incomprehension.

Not forgetting the Octavia has an extra 50L of boot space.

With the exception of the Superb, the Mondeo and Mazda 6 can't compete with Octavia either.

That 'to slow' was typed tongue in cheek. Thought I better explain it before FMS has a heart attack.

What it doesn't say is i bet the nvh of this engine is massively better than equivalent diesel. Not driven this but I rent a few cars and Vauxhalls always seem to be better te reviews suggestsuggest with quality much better than say SeatSeat.