This is the new Vauxhall Insignia Sports Tourer in what is expected to be its biggest-selling specification. Powered by the latest 1.6-litre Turbo D engine and finished in SRi Nav form, this car mixes claims for 62.8mpg combined fuel economy with a lengthy standard features list, all for £23,240.

Even before turning a wheel it’s that last figure that’ll likely draw the attention of most buyers, because it ranks this well-specced model alongside lower-tier Ford Mondeo estates and the base version of the Volkswagen Passat Estate. 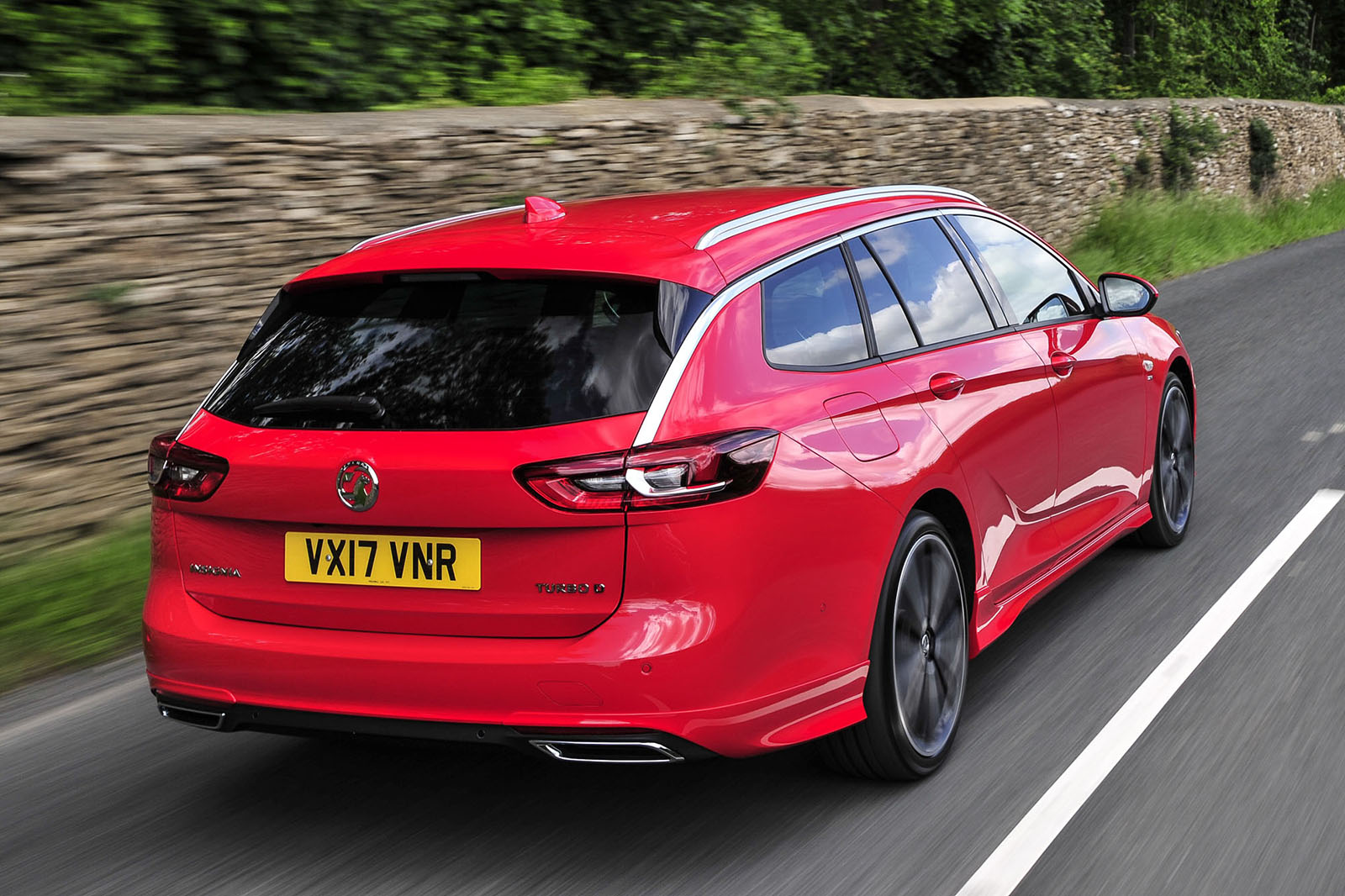 The boot of the new car can swallow 560 litres of luggage with the rear seats up and 1665 litres with them down. While this falls short of the class-leading Passat, which can swallow 650 and 1780 litres, the Insignia’s price means it’s fairer to compare it with the Mondeo Estate. That car falls short of both marks by 60 litres.

This cabin growth comes as part of the new Insignia’s lengthier structure, more intelligent packaging and more vertical rear tailgate, which has actually been designed to enable fitment of specific fleet luggage, such as police car dog cages (seriously) to enhance and expand the model’s appeal.

Other changes include the Sports Tourer’s slightly stiffer rear setup, which retains the multilink set-up of the Grand Sport hatch (four-link for front-wheel-drive cars or five-link for all-wheel-drive) but with slightly firmer settings to enable its maximum payload carrying ability of 567kg in 1.6-litre Turbo D form. To boost practicality the car gets standard-fit electric folding rear seats on all models but the entry-level Design trim, as well as an optional powered tailgate.

Like its hatch sibling, the Sports Tourer is a significantly more pleasant place to sit than its predecessor. The car’s cleanly designed dashboard and more practically placed 8in infotainment touchscreen (which you can actually reach when sat back in the seat, unlike the previous model) make it look like a much more premium product.

You’re reminded of the car’s lower value, however, when you closely evaluate build quality and notice that beneath the soft touch dash top and leather surfaces, there are more coarse plastics. But this is to be expected in a car that needs to prioritise value for money and is not exclusive to the Vauxhall in this class. 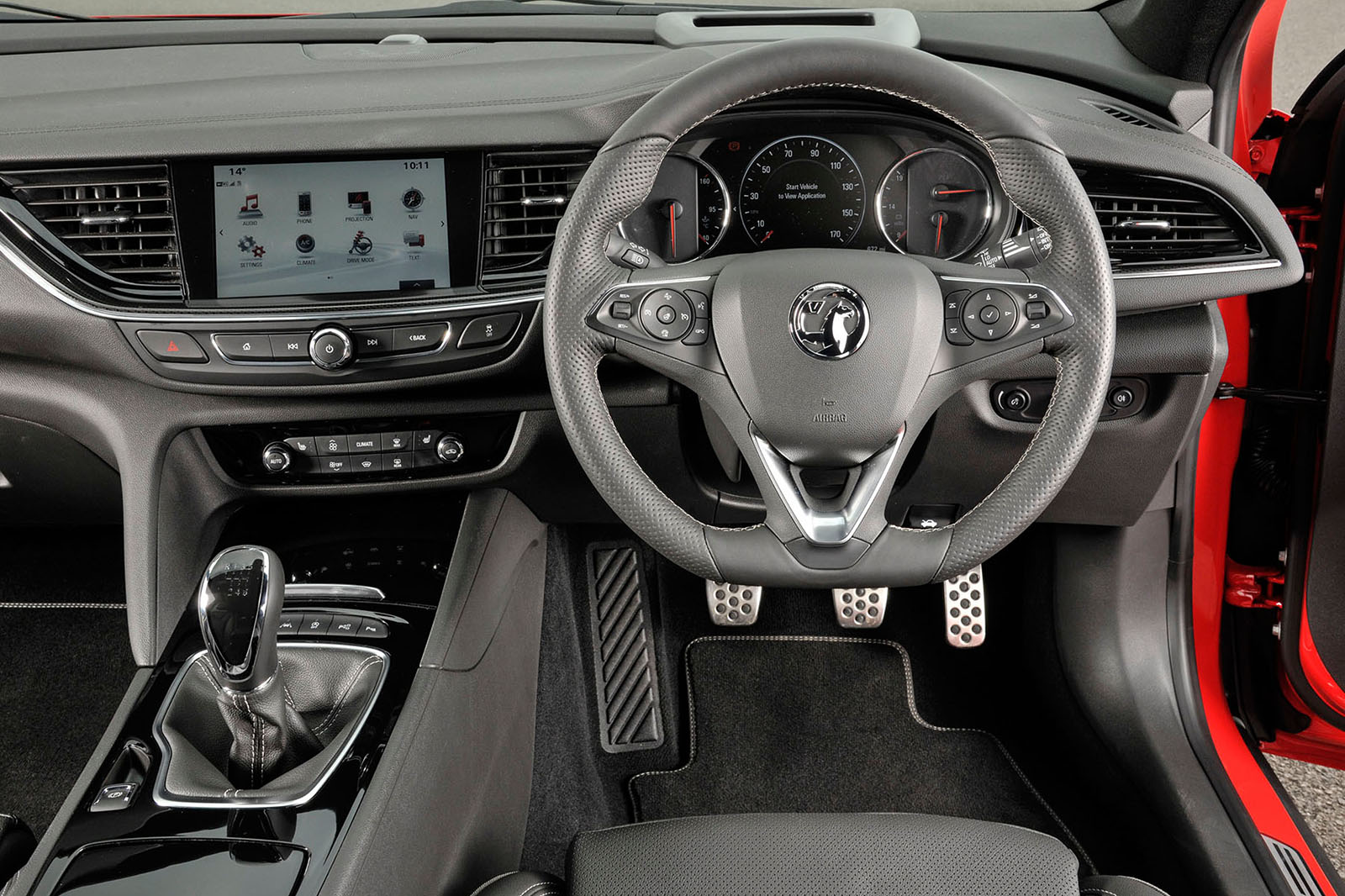 The SRi Nav’s infotainment comes with, as its name suggests, satellite navigation, as well as Vauxhall’s IntelliLink audio system, which has Apple CarPlay and Android Auto compatibility – a big win for smartphone addicts. You also get DAB, Bluetooth connectivity and three USB ports, OnStar wifi hotspot technology plus a digital instrument cluster – a very generous specs list on a sub-£24k car.

Our Sports Tourer also featured a £290 head-up display and a £960 panoramic glass roof, as well as the pricey but undeniably comfortable £1155 leather sports seats, which feature electric lumbar adjustment and are mounted with as wide of a range of adjustability available in this class.

The car’s engine starts with a much quieter tone than previous-generation diesel Vauxhalls, and it pulls away more smoothly with less of a step than before as the turbo spools up, illustrating the vast improvements the brand has made with black pump-fuelled motors.

Our car, with its 134bhp and 236lb ft of torque, offers punchy performance, albeit in a fairly narrow window of revs, and enough grunt to make it a competent motorway cruiser. The car’s six-speed manual gearbox is slick and slightly rubbery through the gate, something that’ll be familiar to previous Insignia drivers, with leggy ratios that ensure the engine remains hushed at a motorway pace.

Interestingly, the engine is slightly more vocal than the less powerful 108bhp version, and it offers its best performance slightly later in the rev band, making best progress at 2500rpm - so it’s actually less suited to urban work. Vauxhall claims a 0-62mph time of 9.9sec, but the more powerful car’s rolling acceleration is a noticeably better – something that’ll make the 134bhp version the desirable option for long-distance cruisers. 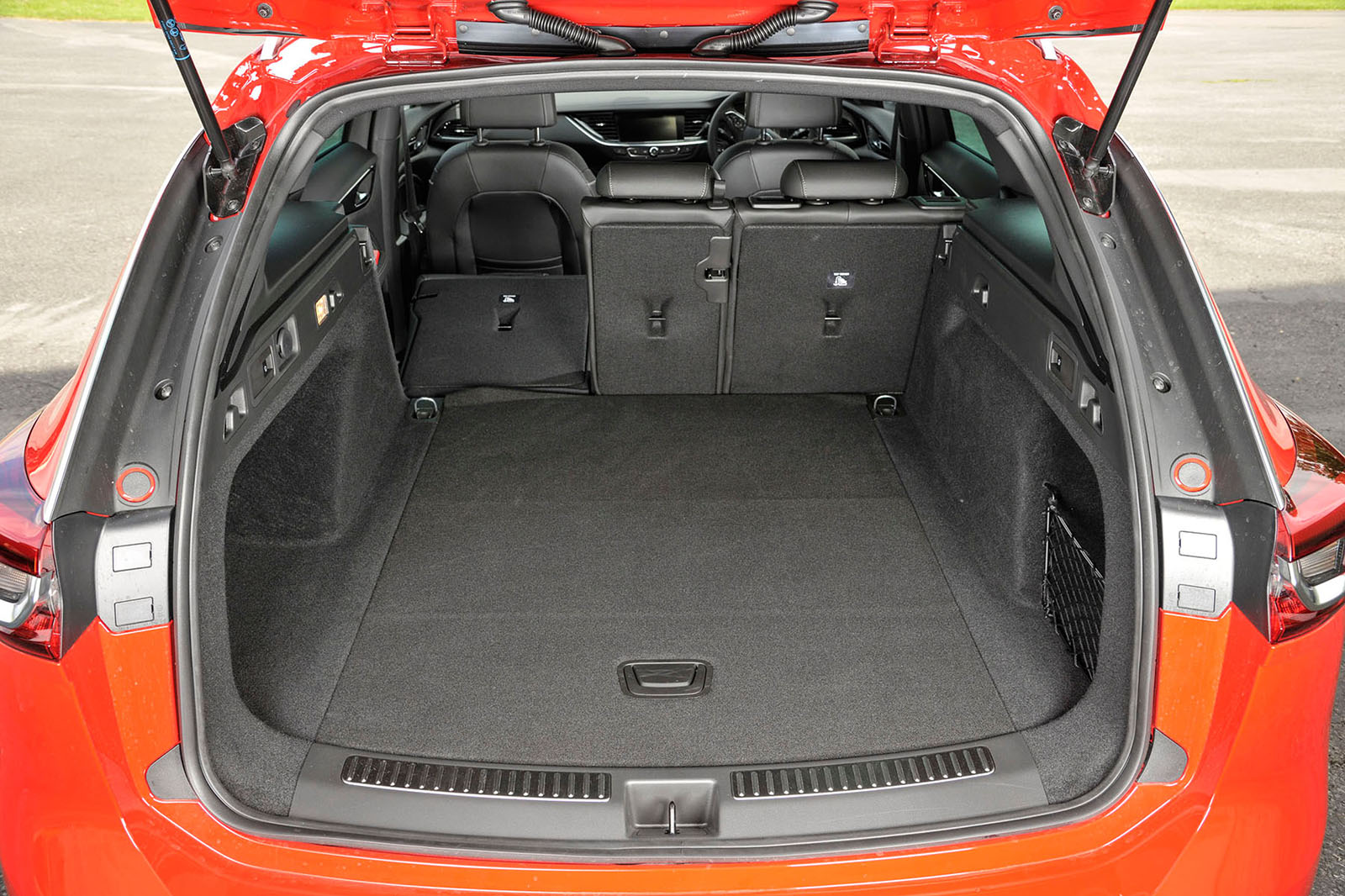 Despite using a slightly harder rear suspension setup, the Sports Tourer still feels softly sprung like the hatch. It glides over bumps and allows its body to lift and dip along undulations. The pay off for that is a car that can pitch and roll through corners more than the flatter-riding Mondeo Estate, although this would likely reduce when weight is added (our drive was in an empty car).

Our car sat on standard-fit (for SRI models) 17in wheels, although 18in and 20in wheels are available as an option (the latter are featured on the pictured car). On broken surfaces, the smaller wheels weren’t able to reduce the level of road noise that penetrates into the cabin, and the Sports Tourer has a noticeably higher road noise volume than the Passat Estate and even Mondeo Estate. It also tends to patter over cracks and ruts, confirming that its natural home is on smoother motorway surfaces.

In this environment, the car’s strengths are most obvious, and its long list of driver assist features make it a significantly more relaxing space to spend time. The SRi gets cruise control, automatic lights and wipers and a front camera system, as well as forward collision alert, lane departure warning and traffic sign recognition technology. That’s quite the list of helpful gizmos in a car of this price.

Also impressive is the car's rear leg room, which was large enough to comfortably hold yours truly (I'm a whisker shy of 6ft tall). The back is also wide enough to hold three adults, although the bolstering on the two outer seats confirms that Vauxhall intends for this car to be a four-seater in most scenarios, with space for five reserved for shorter stints. 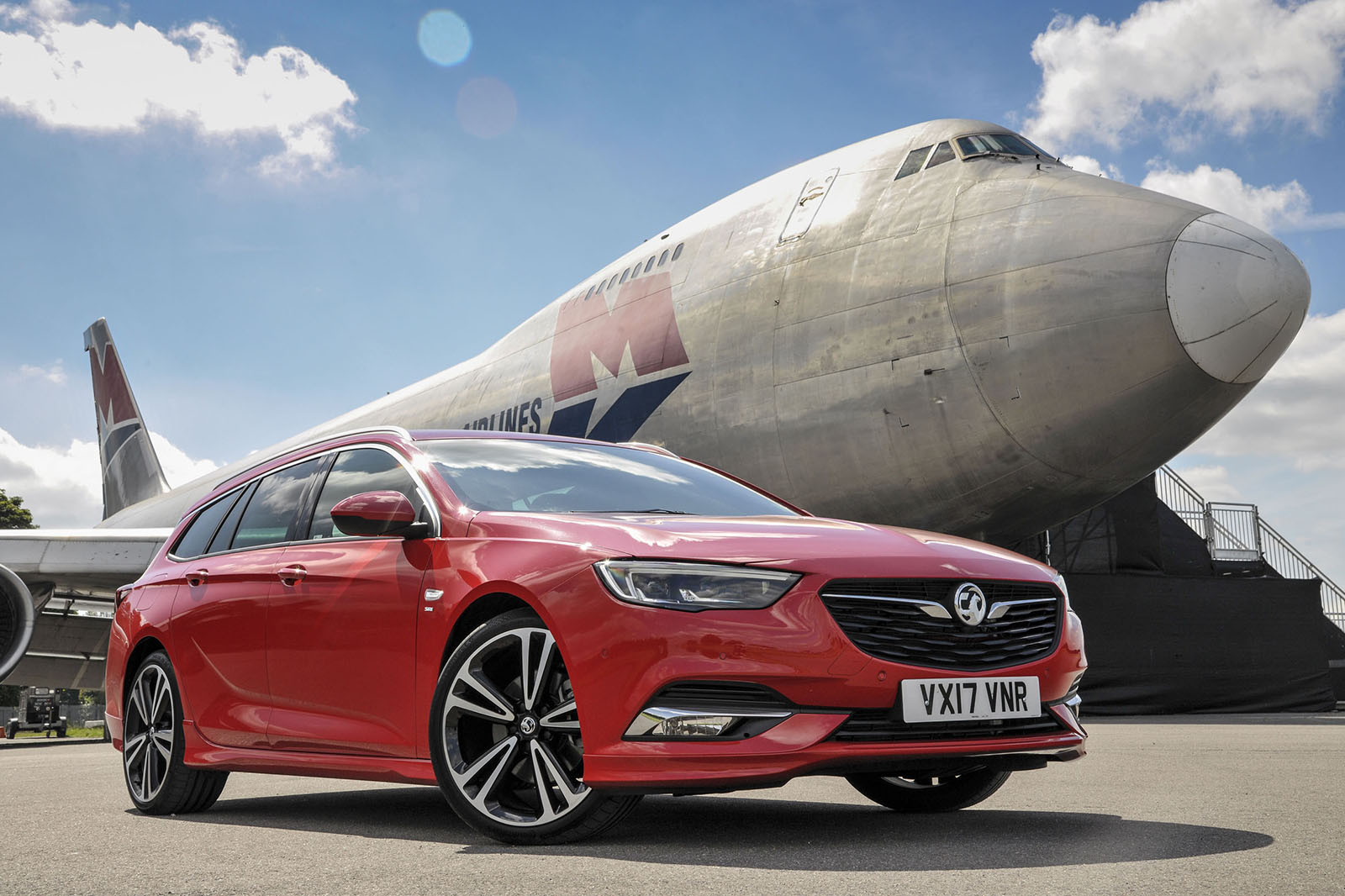 The story with the Sports Tourer is much the same as it is with the Grand Sport hatch – it offers great value for money with a long list of technical features, which makes it a smart choice for those wanting maximum punch for their pound.

It’s not a class leader in any area, with the Passat Estate being more practical and the Mondeo Estate the slightly more engaging car to drive. But as a long-distance machine that’s cheap to buy, cheap to run and comes with a well specced cabin, the new Sports Tourer has to be one of the market’s most intelligent options.

The fact it’s now a good looker and has a more premium interior will only serve to boost that appeal, and will likely mean both private and fleet buyers turn to the new Vauxhall wagon in larger numbers than ever before.

Material as good as VW...

You’re finds exactly the same in VW Arteon - But there you may not be looking for it... And that's why you do not see it...

"You’re reminded of the car’s lower value, however, when you closely evaluate build quality and notice that beneath the soft touch dash top and leather surfaces, there are more coarse plastics."

The difference is that Arteon is Twice as expensive...

Great-looking exterior, i just hope it's got autonomous tech for when the driver falls asleep at the wheel from boredom.
Lanehogger 21 June 2017

How will this go down in Australia

I do wonder how this will succeed as the new Holden Commodore. The Commodore has always been a 5 Series sized car and, I believe, has always had RWD drive too. The new all-new 'NG' rebadged Insignia model is smaller (being from the class below), is FWD, it won't have V8 (or even V6) engine options and will only be available as a hatchback and estate (the saloon variant will only be available in China as the Buick Regal).
View all comments (12)