From £10,1145
Yaris Hybrid gets GRMN-aping performance suspension and a sporty new look but no power increase
Open gallery
Close

Here is a city-friendly hybrid supermini that has been done up in sporting finery inspired by Toyota’s Gazoo Racing motorsport team. Hmm. Sounds very much like we could have a case of confused identity on our hands here.

You see, this isn’t just a supermini with a bodykit and a smart new set of 17in alloys. There are mechanical changes, too. Not only does this particular strain of Toyota Yaris come equipped with Sachs Performance dampers similar to the ones you’ll find in the rabidly excellent Yaris GRMN hot hatch, but it also has a new solid anti-roll bar for increased rigidity, while its ride height has been dropped by 11mm.

Admittedly, one side effect of these modifications is that the GR Sport is quite a sharp-looking thing. But another could be that it's incredibly firm - which brings us back to that aforementioned identity issue.

Were the GR Sport packing the same Lotus-tuned, supercharged 2ZR-FE four-cylinder motor as the GRMN under its bonnet (or even a slightly less powerful but similarly exciting engine, for that matter), that potential firmness wouldn’t be so much of a concern. But with a sum total of 98bhp being developed by the GR Sport’s 1.5-litre petrol-electric hybrid powertrain, all sent to the front wheels by an e-CVT, plus economy figures of 56mpg and CO2 emissions of just 89g/km, it looks like this could just be an uncomfortable but frugal city car. 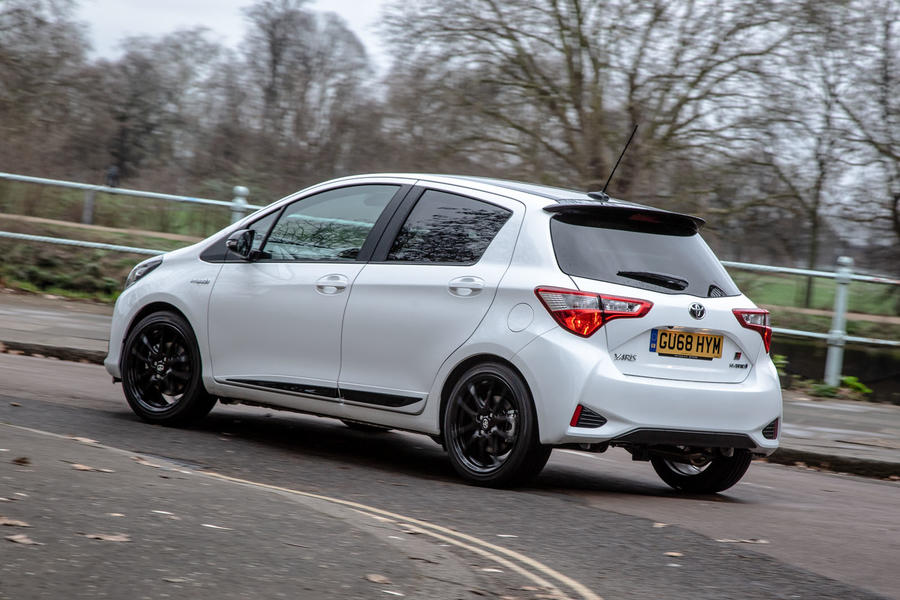 You only need to travel about 20 metres for those suspicions about a lack of suppleness in the Yaris GR Sport’s ride to be confirmed. It’s not just firm for a regular supermini; it feels firm even by hot hatch standards. The dampers are so aggressively tuned that at 30mph its axles struggle to effectively deal with ruts, bumps, manhole covers - practically any imperfection in the road’s surface. Instead, it just deflects off them in a frustratingly ungraceful fashion.

It gives the impression that you’d need to be travelling at a considerable pace for them to properly engage with the topography underwheel. Certainly faster than the national speed limit, in any case; even on a suitably fast B-road, that bustling quality to the ride is persistent.

Credit to it, though, it does at least feel agile - if still a little top-heavy - through faster bends. Body roll isn’t completely erased from the picture, but it is tightly controlled. There's a reasonable amount of front-end grip, too, although this might have more to do with a shortage of punch from the hybrid powertrain than any deficiency in the chassis. Under more aggressive levels of throttle and on a greasy road, its nose does eventually begin to push into easily controllable understeer, but it’s nothing that a lift of your right foot won’t be able to sort out.

On the subject of that powertrain, it feels every bit as slow as its 11.8sec 0-62mph time suggests. You really need to wring its neck in order to extract anything resembling meaningful progress, which means you’re subjected to the inevitable, coarse four-cylinder drone as the e-CVT spikes the engine’s revs while you accelerate.

It’s not without its merits, mind you. Around town, the ability to rely on electric power alone means you’ll achieve very respectable economy figures indeed. Even after the more enthusiastic driving style that road testing often elicits, the Toyota Yaris was still claiming an average consumption figure of about 44mpg. Driven in a calmer fashion, we dare say you’d get even greater levels of frugality.

But on the whole, it’s a largely joyless powertrain – one that has been designed for economical city-driving, as opposed to full-throttle blasts down country lanes. And while it’s undoubtedly good at achieving those wallet-friendly economy figures, it’s not a set-up whose effervescent enthusiasm actively encourages you to chase the revs all the way to the limiter. An Ecoboost-powered Ford Fiesta - even a fairly standard one - is far more enjoyable in this respect. 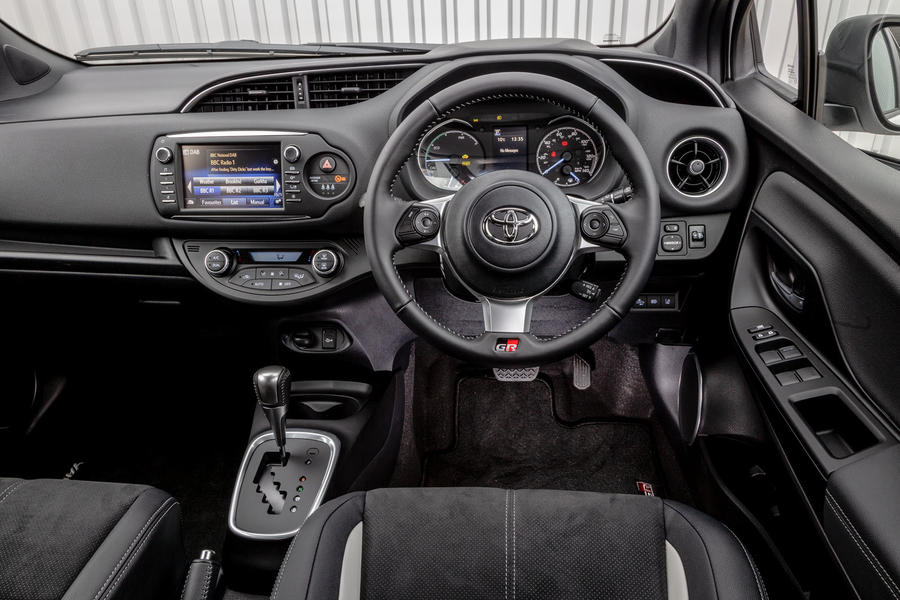 All of this makes you come back to the question of why Toyota felt it necessary to over-engineer the Yaris GR Sport’s chassis to the degree it has. If what it wanted was a sporty-looking but fuel-friendly supermini, it likely could have got away with simply slapping on those 17in alloys and calling it a day’s work. If, on the other hand, it wanted to make a genuinely entertaining driver’s car, it should have gone for a powertrain capable of making the most of those fairly significant suspension tweaks. As it stands, the GR Sport comes across as mismatched.

Then there’s the rather large issue of price: in standard guise, it will cost you £19,835. Not only does that make it more expensive than the Suzuki Swift Sport but also the entry-level Ford Fiesta ST. I’ll just let that one stew for a bit. 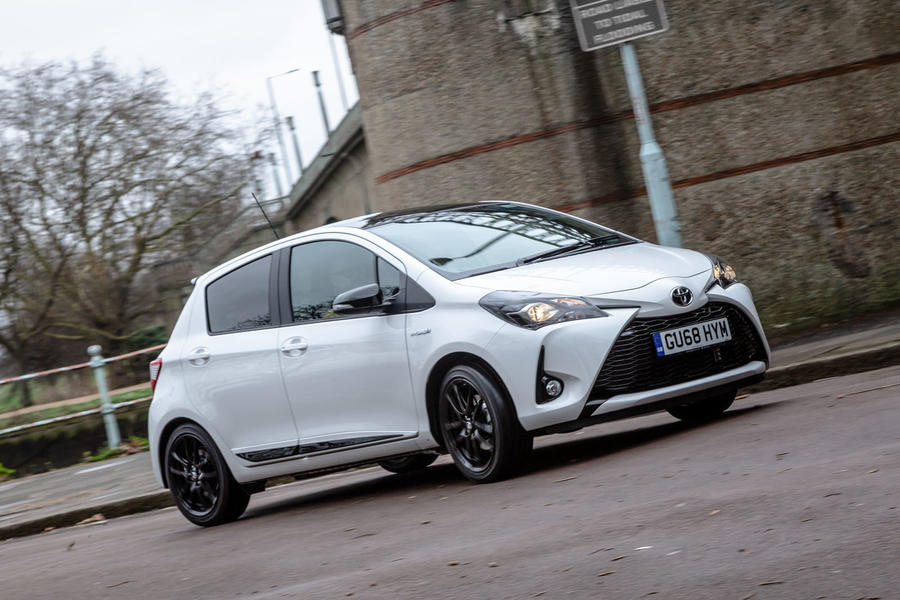 In terms of marketing they got this and whole lot more wrong,as did Honda. Sadly both marques do not have youth appeal, yet they do have amazing reliability, advanced technology and longevity of drive trains plus associtaed components. BMW and Merc have their marketing spot on. how else are Merc able to place the A class as the third best selling car in the UK when the main diesel engine installed is a 1461cc 40 year old Renault engine thta is also us in the Dacia Stepway?

I spent some time with a

I spent some time with a recent model Yaris  and was surprised at how cheap and flimsy the interior trimmings were. I've always respected Toyota as a manufacturer, I expected it to be plain but thought it would be more solid.

After all, we're the only country that overwhelmingly spec our base-engined BMWs with silly wheels and rock hard suspension.

Personally I would love someone to go the other way and build me a hot hatch on decent supple suspension and 14' alloys.  Go drive a bog standard mk1 Focus and tell me it isnt better suited to a B road than almost any 'performance' car you can buy now...