Why we’re running it: To see how easily a hot-shoe rally replica fits into daily life 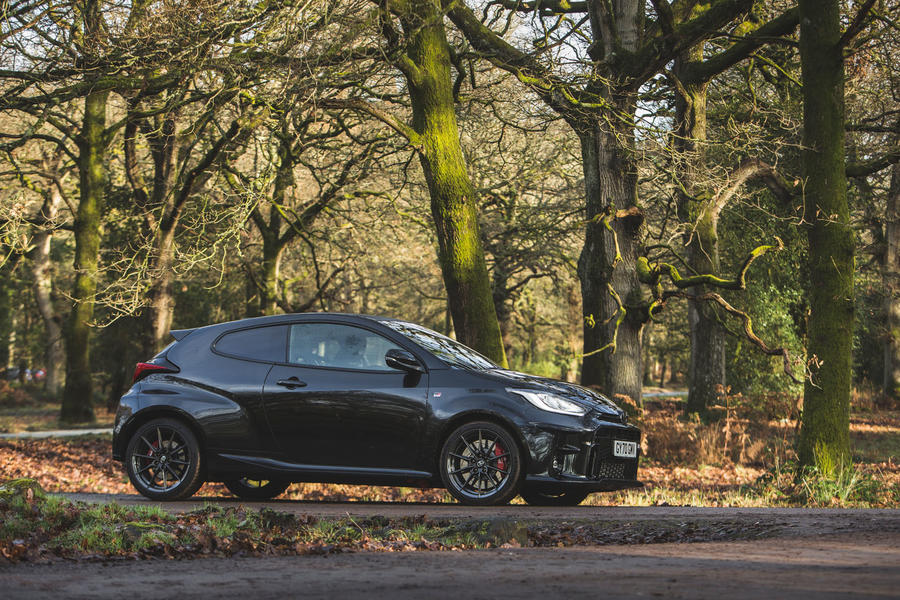 Life with a GR Yaris: Month 2

How big a giant can the Toyota GR Yaris slay, I wondered? You can see my long-termer alongside a Nissan GT-R Nismo and an Alpine A110 this week in a story about cars we can’t believe manufacturers had the nerve to make. So while we had the Toyota and the Nissan together, it seemed prudent to make a video of the two and rude not to ask how capable the hot hatch really is.

Normal testing rules applied. When we test cars or take lap times, the idea is to find a repeatable level of performance: an indication of consistent pace, not flat out, one-off laps that vastly increase the risk of falling off or burning through consumables. It’s road car testing, so there’s always something in reserve.

It was a cold, wet, foggy day on the short and bumpy Llandow Circuit. The advantage, then, was skewed in favour rather of the Toyota, rather than the GT-R Nismo – a car made for conditions (and circuits) rather grander than this.

The Toyota had superb composure. It has dampers that give great body control but also can thump over kerbs without unsettling it. And while you can flip a dial on the centre console to change the power distribution between the axles, whatever I did provided terrific traction. The GT-R has more power to worry about, obviously, so gave its rear wheels a harder time, but the Toyota was just less edgy less often. It was slower down the straight, ultimately, but tractable enough and grippy enough to be very slightly faster over this short distance, with a lap time of 48.9sec to the GT-R’s 49.3sec.

The Toyota weighs some 400kg less than the GT-R, which partly offset the power deficit but, more importantly, meant it could brake a bit better, and its tyres found more lateral grip in higher-speed corners. Perhaps partly it’s the tyres, too: industry engineers do say how good Michelin rubber can be, albeit generally a more expensive decision, and this Yaris runs Pilot Sport 4s (the GT-R was on Dunlop Sport Maxxes). Change any of the variables, – weather, track length and more – and I suspect it would be a different story.

But speed isn’t everything; what excites me is how much fun a car is to drive, not how quick it is. Still, it’s an interesting exercise, and on the day, in those conditions, the Toyota showed just how impressive it is.

Reversing camera A car this size doesn’t strictly need a reversing camera but, given how quickly the rear window grimes over, I’m glad that it has one.

Fuel gauge confusion I read that the tank holds 50 litres, but the gauge shows near-empty before I get near to that. More bravery (and a jerry can) needed. 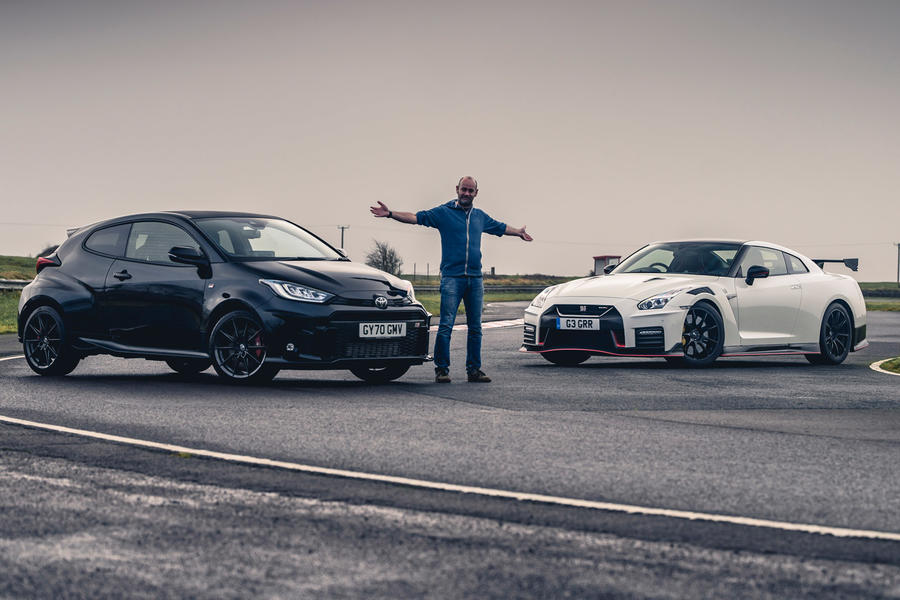 Life with a GR Yaris: Month 1

The GR Yaris has fixed-price service costs like other Toyotas but needs work rather more often. There are interims every 6000 miles, at £165, and main services every 12,000, at £375. There’s also a recommended six-month brake-and-clutch fluid check (free if done at a service). Less travel means I won’t get there for a few weeks and lots of short trips explains its 27.7mpg average.

The GR Yaris has a low-set rearview mirror, I think because the roofline slopes and the wiper-less rear window is small. Anyway, it can leave you with a blindspot, making it hard to see through some corners. You can raise the mirror slightly, but only by a centimetre or two, via a ball-jointed link. This, by the way, is, I think, the limit of my foibles with the GR Yaris. I’m loving this car. 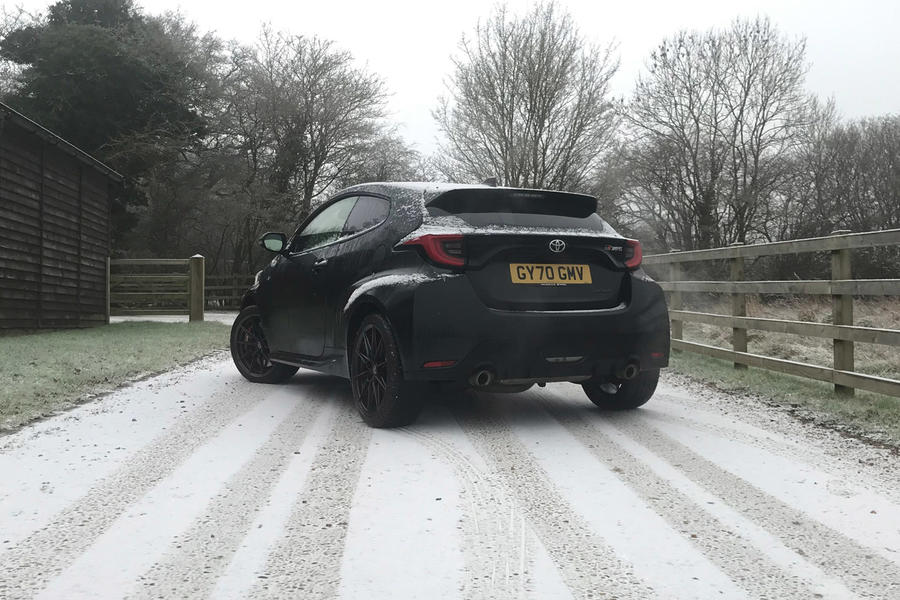 I mean, it’s not like we haven’t been saying it for ages: performance cars could do with being smaller and less powerful.

And yet is it only Toyota that’s really listening? The GT86 (and its Subaru BRZ cousin) was my standout sports car of the previous decade. And the 2020s are off to a solid start with this, the GR Yaris, made to celebrate Toyota’s involvement in the World Rally Championship but constructed not because it needed to build it, rather just because it wanted to.

The GR Yaris is barely a Yaris at all. (Which perhaps explains why some of my colleagues have occasionally referred to it as an Aygo or a Corolla by mistake.) Its chassis is a hybrid of Toyota’s GA-B and GA-C platforms, with all-independent double-wishbone rear suspension joining MacPherson struts at the front, with plenty of strengthening and reinforcement, too, for the four-wheel-drive drivetrain. There are also lightweight aluminium and composite body panels. The roof is carbonfibre-reinforced plastic, then given a nicer carbon-look wrap over the top, which I’d be intrigued to see it without.

Only the lights, roof aerial and door mirrors are regular Yaris items. So this car feels bespoke in the same manner as a first-generation Ford Focus RS, or a Lancia Delta Integrale. It’s old-school like a Subaru Impreza Turbo or Mitsubishi Lancer Evo. The sort of car that doesn’t get made any more, in other words.

The car we’re running arrived in Precious Black (difficult to photograph and keep clean but suitably moody), a £585 metallic paint option that’s one of only four colours. Solid white is no extra charge, and there’s a pearlescent red or white at £880. 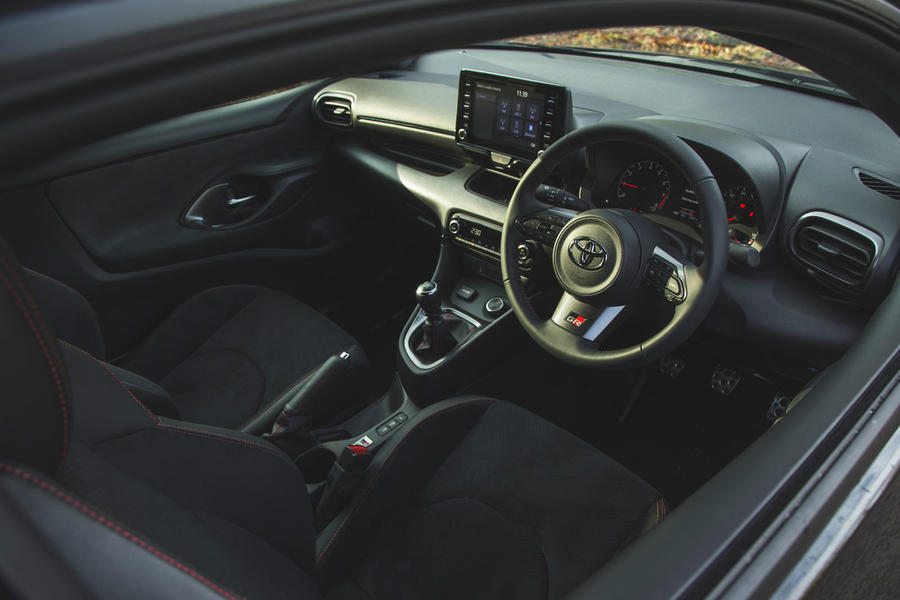 Other than that, the GR Yaris doesn’t offer its buyers too many options. There’s the standard model at under £30,000, but my suspicion is that a car fitted with one of two option packs will be more popular. The £2180 Convenience Pack has sat-nav, parking sensors, a blind-spot monitor, a head-up display and a JBL sound system.

The Circuit Pack, £3500 and equipped here, is rather more racy. Forged instead of cast 18in alloy wheels with Michelin Pilot Sport 4S tyres, Torsen limited-slip diffs front and rear, and stiffer springs, dampers and roll bars. To my knowledge, we haven’t tried it without those and all of Toyota’s UK dealer demonstrators are Circuit Pack cars too.

Otherwise, that’s about your lot for options. An alloy wheel protector and a Safety Kit (warning triangle, first-aid kit, hi-vis vest) are the only other tickable boxes, to the apparent frustration of some potential owners, who’d like the heated seats and steering wheel you can specify in other markets. I’m generally a sucker for those too, but I’m coping. What I have found in really cold weather is that the Yaris defrosts and demists and warms up inside gratifyingly quickly. It is, after all, a Toyota.

So there are sensible things. It tells you not to accelerate too quickly when it’s cold and an extended push of a steering wheel button turns off the default-on lane-keep assist. The cabin layout is very sensible and there’s smartphone mirroring on the central touchscreen. The seats are supportive and the driving position’s only disappointment is that the rearview mirror, seemingly positioned low and close to the driver, can create a weird blind spot, particularly on twisting roads, making it hard to see through corners.

A colleague thinks the brake and throttle pedals are too widely distanced for easy heel-and-toe gearchanges, but I don’t find it too bothersome. It’s quite nice to have such an old-fashioned foible; goes to show what an interactive kind of car this is. The gearbox is a precise sixspeed manual, and the handbrake a conventional lever that disconnects the rear half-shafts if you pull on it while the car is in motion. I’m pleased to report that it’s quite powerful too.

I know it’s daft. It’s 2021: who needs a car that still thinks it’s 1995? I think I do. I adore the fact it’s compact (5mm short of four metres long, 1805mm wide across the body) and not too powerful, though with 257bhp from just 1.6 litres and three cylinders, it can feel a touch boosty. There is perhaps less mechanical feel to its controls than, say, a Honda Civic Type R, but the Yaris counters with the kind of agility and control that’s genuinely rare these days. 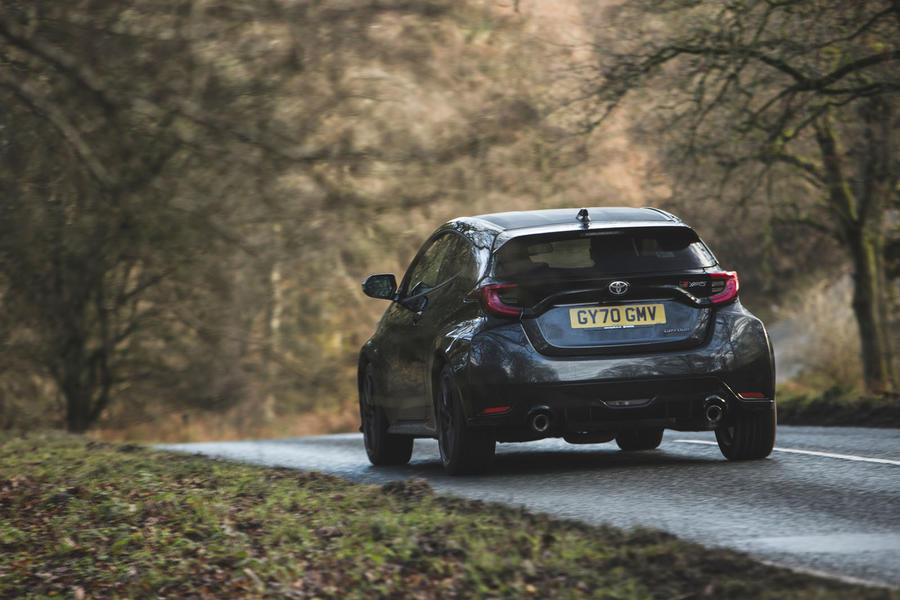 I’m finding it an incredibly easy car to warm to, both for little bits of drama on the right road, but also in daily life, and during days when you can do both. In some sports cars, you pull over during a decent drive for a rest or to take in the view and before you know it you’ll have scuffed the nose on a rock. There are no dramas like that in the Yaris. Fast, enjoyable, discreet and compact. For a car seemingly inspired by the ’90s, it feels incredibly relevant today.

The queue of testers wanting to borrow MP’s GR Yaris must be out the door already, so I’ll bide my time. But I have to know if it’s as much fun on a warm summer track day as it is on a sodden November B-road. I suspect it isn’t quite. But I’m always delighted to be proved wrong by great cars. 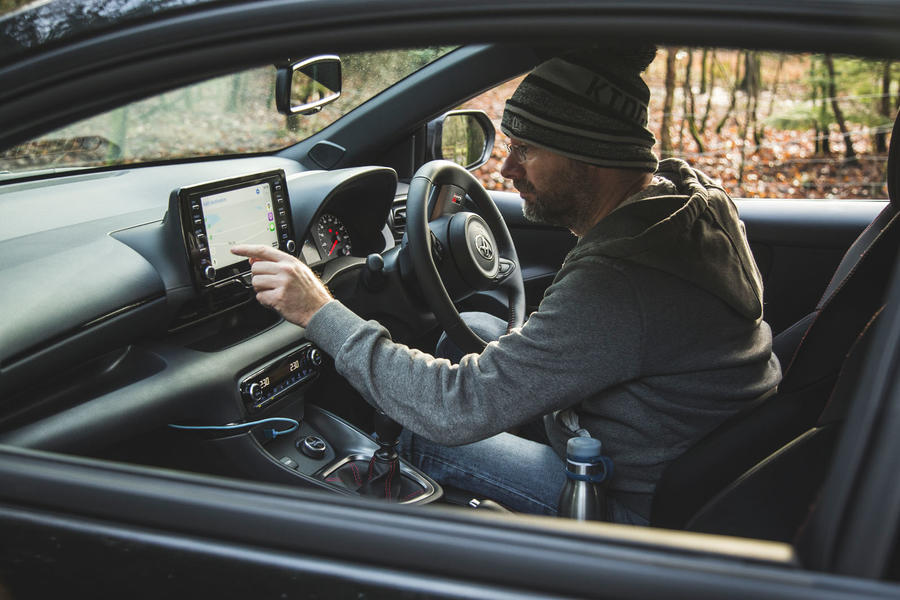 If  it's like other Toyotas then the fuel gauge & range counter counts down to a "reserve" rather than empty (it's typical Toyota caution). That "reserve" may often be ~9 litres but it could well be different on the Yaris GR.

Toyota are onto a winner with this car. I don't need a second car but I am still tempted by this one. It's got everything. I wonder whether an ultra circuit pack with back seats removed would be an attractive option for some buyers.

At last! Thank you Autocar. This isn't an homologation special. A fantastic car, definitely, but not built to homologate the Yaris for rallying.