From £20,354
All-new Golf rival arrives with big promises on dynamic ability and a twist on the hybrid formula so effectively pioneered by its maker
Open gallery
Close

Farewell, then, Toyota Auris, welcome back Toyota Corolla. Goodbye countless marketing millions spent establishing a new name and fresh reputation, hello old friend. Out with the old and in with the older, although it is surely not just me pondering why the passing 13 years have replaced recollections of the dull but worthy family hatch with a nostalgic fondness, lightly sizzled by memories of victorious Castrol-sponsored world rally cars?

If ever there was a right time to change the name, it’s now, as this ground-up, all-new car launches with all the incumbent R&D investment and expectation you might expect for a vehicle that has been benchmarked to beat the class best. So while you might reasonably argue that it would have been more straightforward if the naming U-turn hadn’t been made several months after the car was unveiled as an Auris at this year’s Geneva motor show, the truth is that when Corollas start running down the line in Burnaston, Derbyshire in a few months time, surely only Google will recall it.

Most significantly, today’s Corolla arrives sat atop the Toyota New Global Architecture (TNGA), a complex name for underpinnings that, in this form, have already demonstrated considerable promise in cars such as the high-selling CH-R SUV, hybrid Prius and soon-to-be-on-sale Lexus UX.

Of note, too, is the fact that there is a choice of just two petrol hybrid engines, a decision Toyota says is down to there being no significant customer demand for either a straight petrol or diesel.  There’s the 121bhp 1.8-litre motor currently used in the C-HR and Prius, plus a new 2.0-litre version with 178bhp, each attached to different hybrid systems. These will be offered with the hatch and Touring Sports (estate), which will be sold in the UK.

In line with its stated goal of setting class standards “for best in class comfort and driving engagement”, the Corolla is 4370mm long, 1790mm wide and 1435mm high, with a wheelbase of 2640mm. That makes it 40mm longer and 30mm wider than the outgoing Auris, and 25mm lower. The obvious rivals are the Ford Focus (8mm longer, 35mm wider, 19mm higher and with a 60mm greater wheelbase) and the Volkswagen Golf (115mm shorter, as wide, 17mm higher and 3mm smaller in wheelbase. 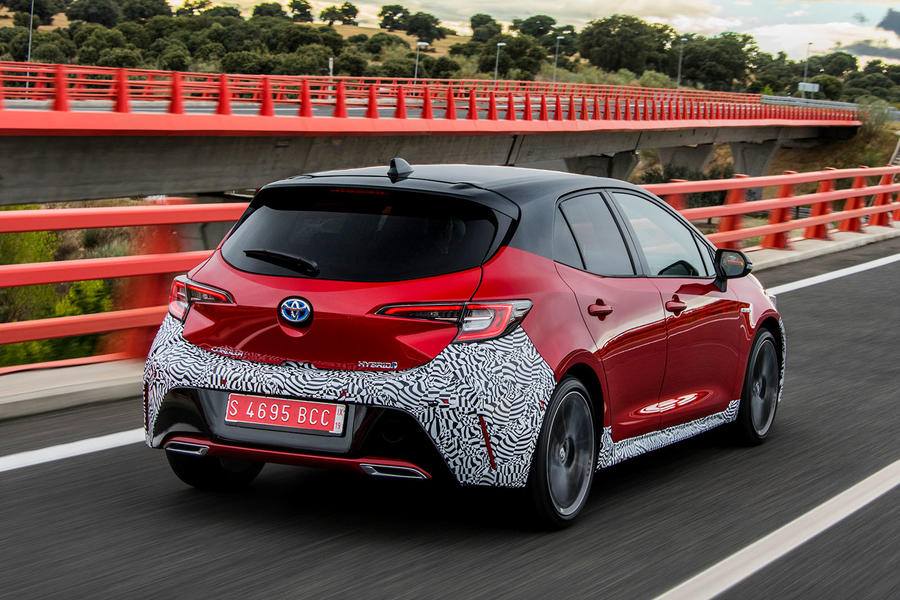 If the CH-R and Toyota Prius hinted at the dynamic leap that Toyota has taken with these new underpinnings, then the Corolla, with all the inherent advantages that come with being lighter, lower and more compact, confirms them, even in this late prototype form.

For while it inevitably doesn’t turn back the clock and serve up the giggle-a-minute thrills of hatches of yesteryear, unencumbered by safety or emissions regulations as they were, the Corolla is a genuinely enjoyable car to drive, gripping the road and controlling its body movements very well, and giving the driver the feedback to know what the front wheels are doing . It is both reassuring and genuinely engaging.

Often, the downside to those positives would be an overly-hard ride, but the MacPherson front and double wishbone rear suspension has been tuned to largely cope with what comes its way. There is a firmness that can translate to bumps and surface breaks unsettling the car, but on these Spanish roads at least, even on larger-than-standard 18-inch wheels, they were decently controlled. While it’s no guarantee of success, the development team tested extensively in the UK. There is also an option to fit a five-way adaptive system that includes damping alterations, opening up everything from eco and comfort modes to increasingly sporty ones to be considered - although you'd need to be dedicated to use them all.

The only powertrain available to test was the new, higher-powered 2.0-litre hybrid, designed to offer eco-conscious buyers who like a bit more performance an alternative to the resolutely fuel- and CO2-focused 1.8-litre. Mated to a six-speed auto, there are two standout features: chiefly, that the link between the accelerator position, revs and actual performance are better matched than ever before, with the CVT-esque disconnect between them now greatly - if not entirely - reduced, and secondly that, so long as you are happy to let the gearbox run as an auto, rather than play with the mostly superfluous wheel-mounted paddleshifters and try to act out your inner F1 driver fantasy, there is strong, smooth performance on offer.

As always, in terms of refinement, petrol or diesel drivers need to recalibrate their minds, not least because the near silence (bar wind noise) below 2000rpm stands in contrast to the engine noise that intrudes thereafter. At a cruise the peace is notable, while if you push on the arrival of engine noise is a momentary surprise rather than a permanent irritation. A sub-8.0sec 0-62mph time underlines that this is a reasonably pacy hatch too.

There are notable advances in interior quality and function, most significantly with the dash getting a complete overhaul that includes better materials, layout and an eight-inch screen operated by buttons and touch as standard. It’s both smart and reasonably intuitive, albeit slightly short of some of the slickness of VW’s various systems. As is common in the class, Toyota has expertly put the best materials where you are most likely to see and touch them, with hard, basic plastics mostly hidden in corners of the car.

While room up front is generous, and boosted by a wide range of seat and steering wheel adjustment, rear knee and head space is tight. Toyota openly admits it has designed the car predominantly around the needs of a two-person family unit, reasoning that anyone with kids would buy the estate. Exaggerating that outlook, our test car was fitted with an optional sunroof that ate 22mm of headroom. 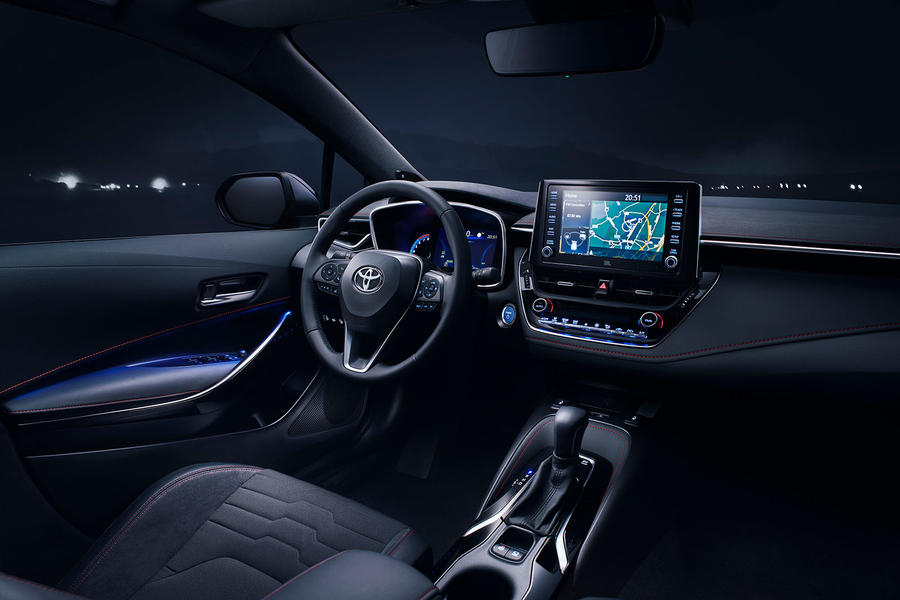 It’s impossible to know whether to recommend the new Corolla yet, because no prices or specs have been revealed, although the argument in favour of the latter looks certain to be bolstered by a greater than average amount of standard equipment. In particular, the active safety roster, which includes the ability to apply the brakes if a potential accident is detected at high and low speeds, is far longer than most.

What we can say for now is that the new Corolla has taken a giant step forward, and that in terms of cabin quality and refinement, comfort and dynamic capability it is up there fighting among the very best. Likewise, you would hope, Toyota’s famed reputations for both reliability and customer service should continue to add credence for buying one.

This new hybrid powertrain is more of a success than any that has gone before it at Toyota, thereby widening the options for buyers, and its warm performance will make it an interesting choice. However, with similar gains promised on the 1.8-litre drivetrain, and the incumbent money-saving gains it has, it remains to be seen which will be the pick of the range.

It’s also worth noting that some of the quibbles, such as wind noise and the slightly fidgety ride, are still being worked on. What appears to be a good car could yet get even better.

Watch this space, then: this is a super-competitive class that already offers something appealing for every taste. However, the Corolla is both very good and, thanks to its hybrid powertrain and dynamic leaning, different. At the right price and in the right spec, if it meets your priorities it could be exceptional. 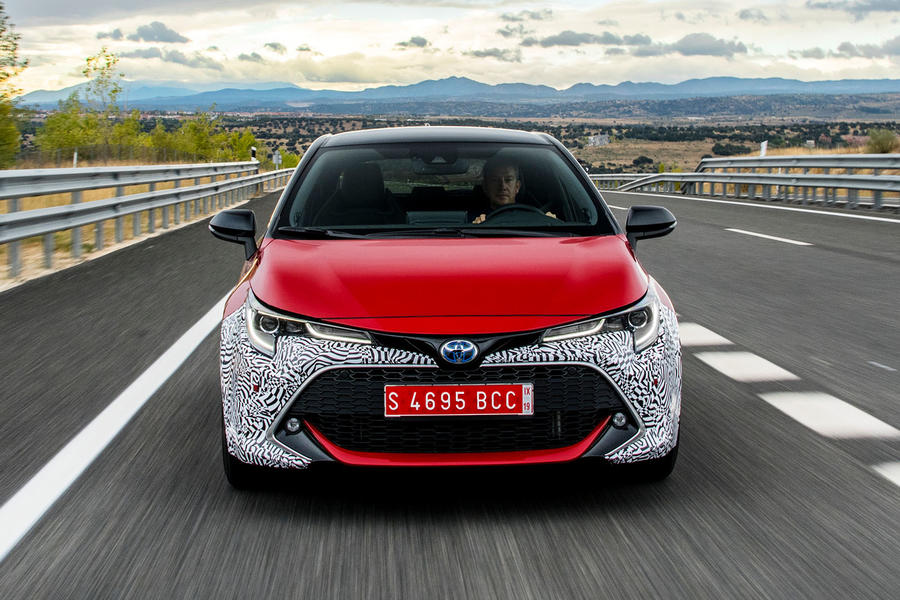 Please tell me they haven't removed the epicyclic gearbox and replaced it with a traditional auto? That would be a huge step backwards just to please people who still think stepped gear changes actually matter, ie journalists and consumers that are stuck in the past. Part of the beauty of the Toyota hybrid system is its simplicity, which is evident in the amazing reliability of the whole drive train. Truth is average noise levels are much lower compared to regular petrol cars. Occasional burst of drone are componsated for by largely near silent running the rest of the time.
John O'Groats 8 November 2018

The Touring Sports version - which come with a longer wheelbase, giving increased rear knee room and a really significant increase in luggage capacity would be the logical model choice for many, given the really cramped rear knee legroom and quite poor luggage capacity of the Hatchback versions.