Share review
Estate variant of the new Corolla will take on the Ford Focus and Volkswagen Golf from 2019. We've sampled a prototype
Share
Open gallery
Close

Fifty-three million pounds and 400,000 hours of work. That’s what it took to create the Toyota Corolla Touring Sports from the basis of the hatchback project, and it’s a pertinent figure lest anybody think the addition of an estate to a range in order to please a shrinking but still significant proportion of European car buyers is the work of a moment.

At the peak of work, the project had 60 full-time members, with Toyota's new European styling office in Cologne, Germany, taking on the design as its first ever creation. The catch-all goal was to create a car that can deliver “family adventure”, according to its maker - which loosely means it's a car that car handle all the needs of people who are young enough to have outdoor hobbies and/or have kids.

So, more room in the boot, then, the size being dictated by how well objects such as an average adult's bicycle fit in. This has led to a stretch in the car’s overall length over the hatchback’s by 283mm, as well as an increase in the wheelbase by 60mm so there’s also more room in the rear seats – better to fit in some extra adults who might share your pastimes or a brace of children in bulky child seats. 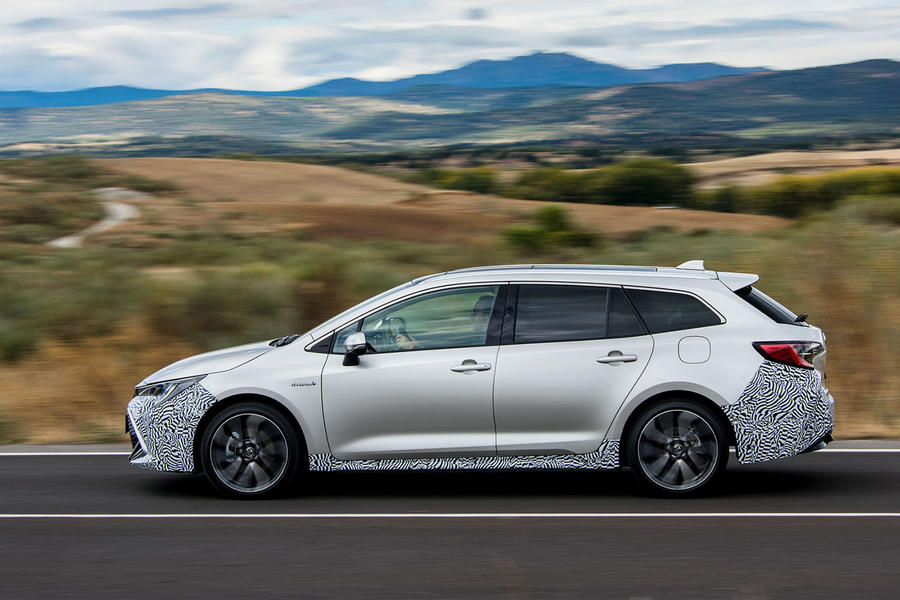 Bear with me, because I appreciate that it's hard to get excited about a boot, but that, for most buyers, will be the point of this car.

Toyota has yet to homologate the Corolla (this is a prototype test, after all), but the indications are that the goal has been to play in the same ballpark as rivals, rather than eclipse them.

Rear seats up, then, the Corolla Touring Sports has 598 litres of space (the Golf has 605, the Focus 608 and the Octavia 610). Seats-down figures are shrouded in more uncertainty, but the indication is that the capacity with a space-saver spare wheel (rather than full-sized one) fitted will be 1606 litres (against the Golf on 1620, the Focus on 1650 and the Octavia on 1740). Enough, argues Toyota, is enough. And fitting a bicycle or three large suitcases in the back is enough, without needing to compromise things by adding more.

Other neat tricks include a single-pull handle to drop the rear seats and extend the luggage space, a false floor that can be dropped to increase boot capacity (or under which smaller items can be stowed out of sight) and a nifty trick whereby that same floor can be turned over so that a plastic coated surface is exposed rather than a more traditional semi-carpeted one. If you’ve ever put wet wellies or sandy shoes in the back of your car, you’ll appreciate the subtle benefits of that one.

So too the additional rear leg room is welcome for passengers. It’s not exactly commodious for adults, but it is manageable. We’d recommend steering clear of the optional panoramic sunroof, however, unless you are certain that the only rear passengers will be kids or very small adults, because it eats substantially into the available head room.

To drive, the Corolla Touring Sports mirrors the experience of hatchback, at least when mated to this 178bhp 2.0-litre hybrid powertrain (we're yet to test the more eco-focused 121bhp 1.8-litre option). As such, it's decently composed, offering a frisson of involvement without giving up too much in the way of comfort. Although 16in wheels are available, our test car was fitted with an 18in set, and that may in part explain why some road imperfections could be felt – but that's the only negative.

Our car was also fitted with Toyota’s five-part adaptive system that allows you to scroll between various driving modes, from Comfort to Sport +. While each increment makes a notable difference to the Corolla’s behaviour, it seems a largely unnecessary optional feature on a small estate car.

The powertrain is also good: better than anything that has gone before, wonderfully smooth and quiet on a cruise (to the point that some excess wind noise off the mirrors stands out and can become mildly irritating) and decently swift when required to be so - albeit with a surprising arrival of the engine note beyond 2000rpm.

A 0-62mph time of 8.1sec puts the Corolla comfortably on par with the 2.0-litre diesel-engined cars that buyers are likely to be benchmarking it against, as does the 74.3mpg economy figure. The CO2 figure of 87g/km, meanwhile, is comfortably better. The CVT gearbox works reasonably, although the steering wheel-mounted paddle changers feel a bit superfluous beyond making the driving experience slightly more involved.

The interior of the new Corolla is a triumph in almost every way, at least in this (unspecified) form: the fit and finish are worthy of Toyota’s reputation and the materials and quality largely a match for Volkswagen’s.

The new infotainment screen looks impressive and makes good use of a combination of buttons and touchscreen functions, but it can be a bit clunky to operate and is short of some functions offered as standard by other car makers, including Apple CarPlay and Android Auto smartphone mirroring.

The driving position is also comfortable, with reach and rate adjustment available on the steering wheel and the seat position having a wide range of settings. 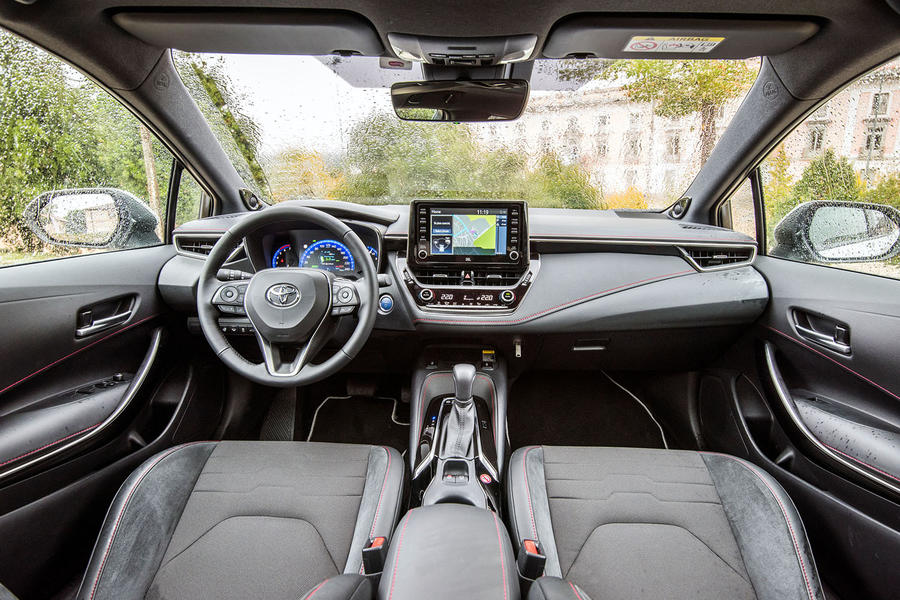 As with the hatchback, it’s impossible to know whether to recommend the Corolla Touring Sports yet, because no prices or specs are available. Again, the latter should add to its appeal, with Toyota vowing to outpunch its rivals on equipment levels, especially around the safety kit it will provide as standard. And, again, you would expect Toyota and the Corolla to deliver in terms of the customer service and reliability for which the brand is famous.

But without a price, the best conclusion we can offer from this prototype drive is to say that the Corolla Touring Sports is definitely worth a second look when we get to drive it on a wider variety of roads and with more information at our fingertips. 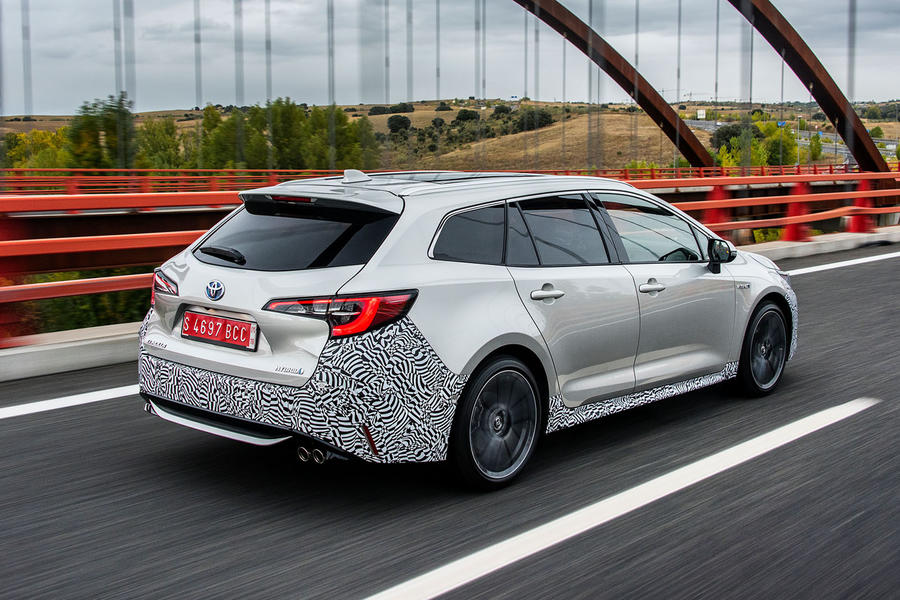 I'm glad to see a

I'm glad to see a manufacturer putting time and effort into something that isn't another dreary SUV, and it looks like a decent product to me.  Saying that interior material and quality is "largely a match for Volkswagen's" is setting the bar quite low, though, as surely that only means hard plastics these days?

Where's the little 80s digital clock gone?! I like this car a lot, can it run on battery only for a few miles or will the engine always cut in? Would make a decent replacement for our diesel Tucson.

Photos or mock-ups? NOT a well thought out boot.

Looking at the boot, it is not that wonderfully thought out. Typical of cars designed by people that don't actually use that style, they have lost or wasted the cross-wise width that uses the space behind the wheel arches. In the image, there is no such space. It has been filled in so there is a smooth panel at the side. This matters if you, for example, play golf. The clubs fit across the boot in that space. There is rarely enough length to a boot to fit the clubs in (at least, not if you want to fit other things in too). My previous Octavias (cars, not estates) had that space and I could get three sets of clubs in. My current golf Estate can fit in two sets this way but the boot isn't as big as that in the Octavia.