8
Share review
Does the smallest engine reduce the appeal of this hybrid compact estate or make it more of a bargain?
Open gallery
Close

There’s something brilliantly fuss-free about the Toyota Corolla, even more so in this Touring Sports configuration. Massive boot, Toyota reliability, decent comfort… Sometimes, all you need are the simple things in life.

We’ve driven the 12th-generation Toyota Corolla Touring Sports before (is it just me or does that bodystyle nomenclature seem the wrong way round?) but this time it’s the turn of the smaller engine, the 1.8-litre petrol hybrid that’s paired with a CVT gearbox, as it is in the 2.0-litre. Power is down from 177bhp to 120bhp because of a combination of a less punchy petrol engine and smaller-output electric motor.

In the 1.8-litre, the CO2 figure drops into a lower tax bracket, so if you’re a company car user, you’ll want to look at this version. Fuel economy is also slightly better, with a claimed range of 55.3-62.7mpg (55.4-57.6mpg for this specific Design trim). Our test average was 55.1mpg over a lot of mixed miles, including a long schlep on the motorway, so if nothing else it shows that the WLTP measurement method is more accurate than its predecessor.

The interior is as functional as you’d expect from Toyota. The boot is 581 litres (marginally down on the 611 litres in the Volkswagen Golf Estate ) or 1606 litres with all the seats folded. A more stylish rival such as the Peugeot 308 SW doesn’t get anywhere near those figures, so it’d be a toss-up between looks and practicality if you’re choosing between those two.

The Toyota also gets two levers in the boot to fold the 60:40 split rear seats completely flat, so it’s easy cramming stuff in. If you can make do without a spare wheel, there’s a vast cavern under the boot floor, too.

Elsewhere, the infotainment has a useful number of physical buttons combined with touchscreen functionality, but the fonts and layout aren’t quite as slick as on some rivals’. 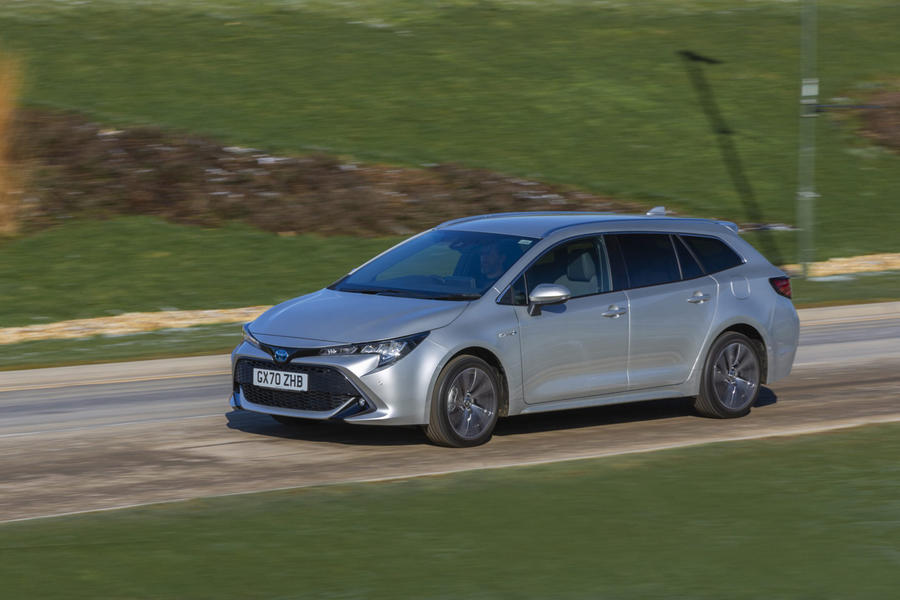 Let’s be frank straight away: it’s not going to set the world on fire. Despite riding on the Toyota New Global Architecture GA-C platform, and various claims from its maker that its handling is aimed at Europe thanks to the MacPherson strut front, multi-link rear set-up, the Corolla Touring Sports is definitely happier over a leisurely journey.

The lengthened wheelbase on the Touring Sports helps, enabling it to feel stable over long and short undulations, while the suspension and tyres (225/45 R17 on the Design trim) also do a decent job of isolating lumps and bumps. Body roll is well controlled but the light steering and safe handling are tuned more for comfort than involvement.

Still, its 120bhp output is comparable with that of rivals like the Golf and 308 and is good for 0-62mph in 11.1sec. It’s not a rocketship, but it’s adequate. As ever with the CVT, it spins away annoyingly during hard acceleration, but the engine noise in today's cars is getting so well isolated from the cabin that in all but the most foot-to-the-floor acceleration moments, the Corolla is a quiet companion.

That’s borne out in the lack of suspension noise as well. It’s a well-insulated little car. 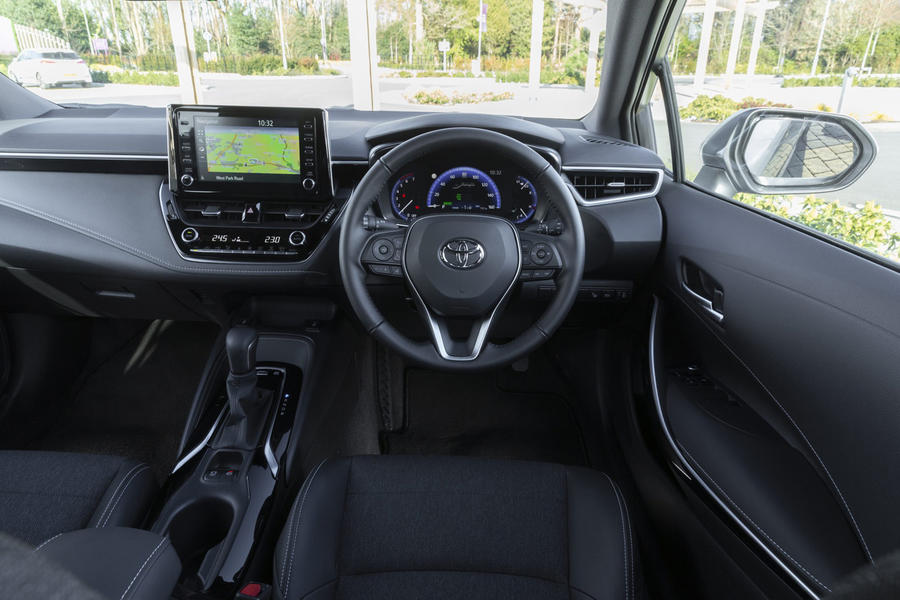 In a world where even basic things, such as a takeaway coffee, come in oodles of different varieties, something as simple as a mid-sized estate car is surprisingly appealing, even if the hybrid set-up may have been considered complex just a few short years ago. The Toyota isn’t going to light up your world, but as a multi-purpose tool, it’s just about spot on. Like the Swiss army knife, it isn’t glamorous but it is effective.

There’s one more reason to recommend this particular version. Like all Corolla Touring Sports, it’s built in Derby. But unlike the 2.0-litre, the 1.8 engine is also made in the UK, at Toyota’s factory in North Wales. 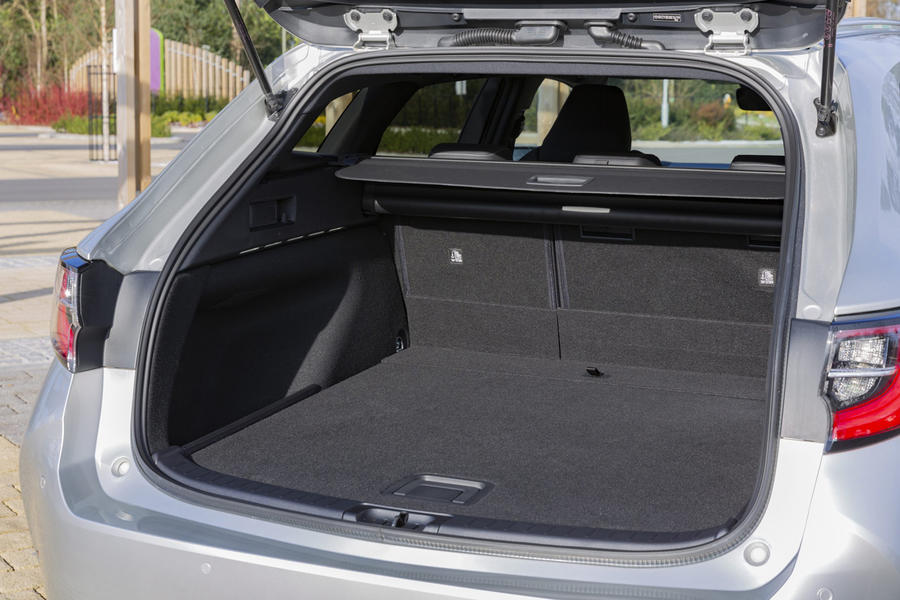 Log in or register to post comments
nimmler 19 November 2021
I dont understand that this Toyota is the best most reliable practical car you can buy yet dumb brand British buyers still buy overpriced korean suvs and unreliable diesel German junk.
This car in 30 years will still be on the road when the kias and golfs will be cubes in a scrap yard

My only issue with Toyota is that they are TOO cautious and bland which makes many mouth breather curtain twitcher buyers go elsewhere, where is the rumoured GR Corolla with 300ps? Its great that the derbyshire factory workers pump out safe yet bland taxis but I guess Toyota does not want be too outlandish seeing Honda swindon’s demise after the radical civic did not meet sales targets .

Actually according to Whatcar Suzuki, dacia and ssangyong are all more realible than Toyota, maybe we're not so dumb.

I just had this dialemma, get the 1.8 Tech Icon, or the 2.0 Design, or go for a VW Golf estate. Went with the 2.0 Design, for the extra punch, and the spec over the Golf is a massive difference. If I specced a Golf up with the things that are standard on the Corolla, it would have been £2500 more, which means more BIK tax.

Boring this car might be to some, I would say its all the better for that. Not every car needs to lap race tracks, or be back road blast. They need to do the day to day job

What a pity it's always faint praise for these.

Doesn't go wrong. Very cheap to run (did you know how long the brake pads last because the hybrid regen does the hard work?). But no, the unthinking masses follow fashion, PR film flam and brand snottery and have bought something oil burning from the VW Group for years and years.

Off you go and put some wee into your Adblue tank and clean your DPF!

Dumb British buyers tend to want the shiny if unreliable and overpriced, hence why you see £30k+ korean suv junk on the roads.