From £72,7007
Tesla has upgraded its SUV's air suspension and made its motor more efficient, but is it still a stand-out luxury EV?
Open gallery
Close

The gargantuan Tesla Model X has been updated. Not that you’d be able to tell from looking at it, mind, because all the changes are found beneath that rather expansive, visually challenging exterior.

The headline is a revised drivetrain. Tesla says the primary focus has been improving the efficiency of the permanent magnet synchronous reluctance motor by optimising things such as cooling, lubrication and gear design. For those of you who appreciate these sorts of things, the outcome is an efficiency rating of 93% - which sounds very good indeed. For the rest of us, it means there’s more range (315 miles on the WLTP test cycle), more power and more torque - 415bhp and 487lb ft, to be precise.

The air suspension has also been updated. It now features fully adaptive damping and improved governance software that can better predict how those dampers should react to the road surface, vehicle speed and driver inputs. And, this being a Tesla, if a new version of that software comes out, it can be downloaded and installed wirelessly - which is rather clever.

The Model X can now charge at a faster rate, too, so it should top its battery up 50% quicker than before when plugged into one of Tesla's latest Superchargers. 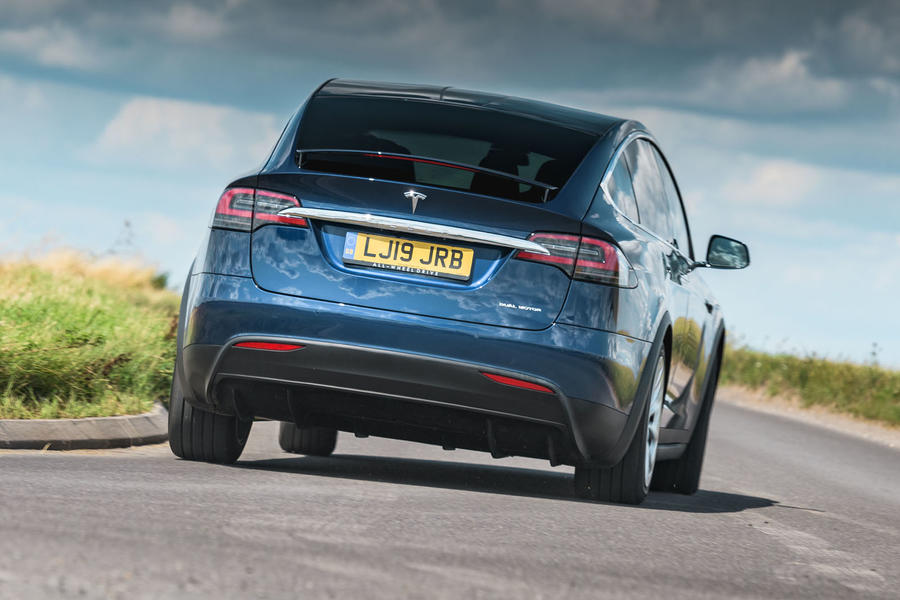 The Model X is impressively quick. We’ve come to expect an impressive turn of pace from Tesla products, but there’s still a childish sense of satisfaction that comes from flooring the throttle and experiencing the force with which this massive SUV can accrue pace.

To a bystander, it must be a fairly comical sight to behold – almost like watching Mr Creosote run the Olympic 100-metre sprint final and take the gold medal. Well, maybe not that preposterous, but the effortless urgency with which this rather heavy car can simply take off is as impressive as it is novel. And with a 0-60mph time of 4.4sec, the Long Range isn’t even the quickest Model X you can buy; the Performance will do it in 2.7sec, which is absolutely outrageous.

That fast-twitch muscle response is only one aspect of what makes this powertrain impressive, though. Just as impressive is how smooth it can be when you’re not trying to reacquaint your children with whatever they had for breakfast that morning. Step-off is impeccably tidy and, once you’ve learnt how to work with the regenerative braking system, the task of gradually slowing to a halt isn’t overly uncouth. Admittedly, the fact that there are only two modes for the regenerative braking (hyper-aggressive and almost non-existent) seems an oversight; a wider range of intermediate settings would be a welcome addition.

Past the powertrain, the Model X's credibility as a luxury SUV begins to unravel. Even with those changes to the suspension, the manner in which it rides is still unbecoming of a car costing £83,050.

There’s a wooden, almost uncultured character to the way in which it deals with lumpen stretches of road that results in pronounced headtoss and a near-permanent sense of restlessness on anything other than glass-like surfaces. An ability to glide nonchalantly over any imperfections isn't too much to expect. The Model X’s key rivals - the Mercedes-Benz EQC, Jaguar I-Pace and Audi E-tron - are all far far more accomplished in this regard.

The same applies to its motorway cruising manners. While the ride is certainly less agitated on these smoother surfaces, Tesla still has a long way to go as far as interior isolation is concerned. Wind noise isn’t too pronounced, but the amount of roar the tyres generate at speed is disappointing. A serene, hushed cruise isn't too much to ask from any high-end SUV, let alone one without a noisy combustion engine.

The Model X doesn’t handle particularly tenaciously, either, but then it is a 2439kg SUV, so it’d be unfair to expect any dynamic miracles. Its lower centre of gravity and firm suspension mean it does a reasonably commendable job of keeping its mass in check, but the steering is totally dead and the artificial heaviness that has been engineered into the rack isn’t an ideal substitute for genuine feel.

The consequence is that you’re never totally confident in the car's ability to handle a corner at pace. Its weight means it’s capable of building fairly significant momentum, too - momentum that, if you’re travelling a bit too quickly, can continue in its original direction of travel after you’ve turned the wheel. Admittedly, this understeer is never particularly alarming and can be easily reigned in, but it quickly dissuades you from repeating your mistake.

Still, at least the absence of engine noise means you’ll hear the tyres squealing loud and clear as they approach and then surpass the limit of their adhesiveness - so in that sense, you could say it’s somewhat communicative. But you soon learn the best way of navigating a windy road quickly is to slow right down on corner entry, get the nose turned in and wait until you’re very nearly out the other side before hitting the throttle and getting back up to speed. It doesn’t really flow, this car.

It is practical, though. The interior is properly spacious, and you’d probably be able to transport a pair of adults in the third row over short distances comfortably enough. Material quality is a bit questionable in places, but the 17in touchscreen looks properly smart and actually works very well indeed. We're usually against housing all controls within a touchscreen, but the fact you can control things such as temperature and fan speed from the steering wheel is a clever workaround.

Autopilot isn’t all it’s cracked up to be, and this has nothing to do with the fact that it’s not actually a proper autopilot function. That it’s effectively glorified adaptive cruise control with autonomous lane changing isn’t the issue, either. It’s that it just doesn’t work that well. It's so easily spooked by its surroundings on the motorway that we eventually gave up on it and just used the standard cruise control instead. Perhaps it works better on enormous Californian interstates, but it’s a bit rubbish in Britain. 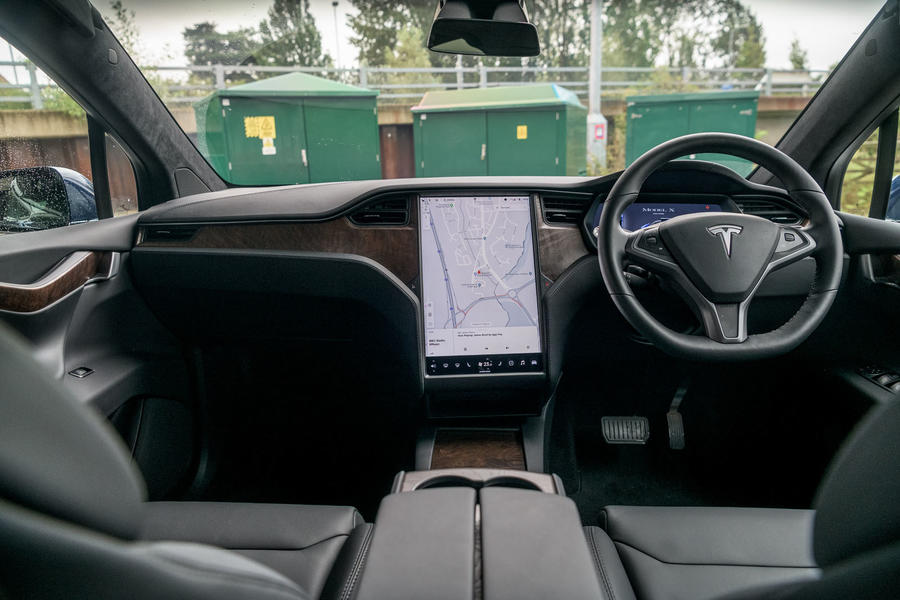 The Model X isn’t the most dynamically competent nor the most refined or comfortable electric SUV you could spend quite a large amount of money on. Neither is it the best finished nor the most appealing from a material point of view. The I-Pace, EQC and E-tron all run rings around it in that respect. But the Tesla has an ace up its sleeve: access to the Supercharger network.

In many ways, this proprietary charging infrastructure is more impressive than the car itself. Not only is ease of use outstanding (once you’ve set up an account, all you have to do upon arrival is plug the car in), but so is the rate at which it tops the Model X’s 100kWh battery. We saw a sustained 300 miles of range being added per hour of charge at one station.

Then there's the sat-nav system, which will direct you to a Supercharger if you don’t have enough range to complete your journey. It’ll also tell you how long you’ll need to charge for, how much range you’ll roughly have left when you arrive and whether or not you could complete a return trip without needing to top up the battery. Oh, and the Model X now comes with a CCS adapter that enables you to plug in to any other third-party charging network as well.

Provided the infrastructure is in place in your area (and these days it probably will be), you’ll easily be able to travel long distances in the Model X. Don’t let anyone tell you otherwise. 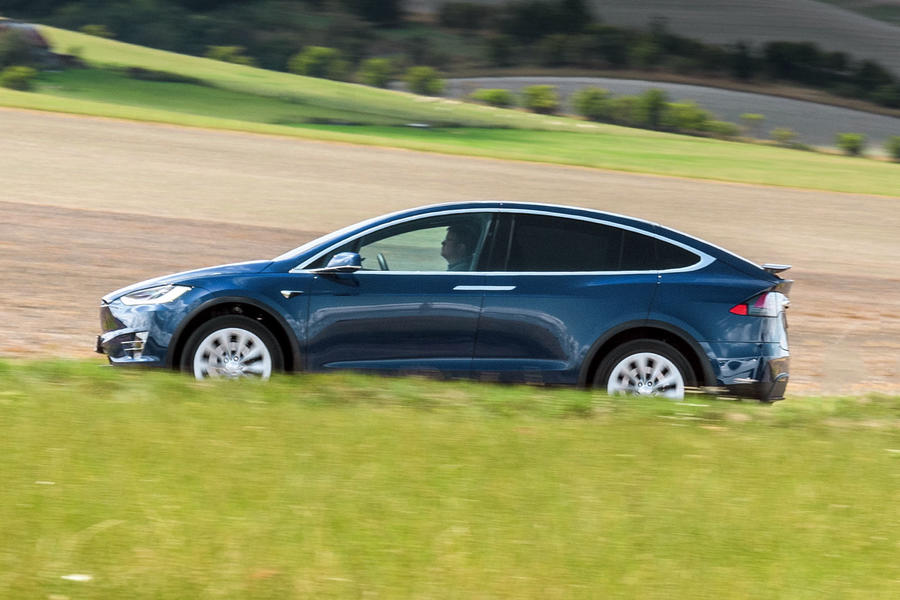 Gargantuan? Oh please, enough with the hyperbole... your first paragraph sounds faintly ridiculous. Sure, the X is a largish car but it's certainly not a full-size SUV. Stop treating Autocar readers like parochial, ill-informed idiots.
FRI2 29 August 2019

No other EV SUV can touch its

No other EV SUV can touch its range and performance period. Its the best.

This dual motor Model X is designed to replace an inefficient SUV. There are 33.7kWh per gallon equivalent ⚡ of petroleum fuel. Hence it can tow a boat, caravan, horse or trailer with in excess of 100 miles per gallon equivalent ⚡! How do you not know this or review it's towing capabilities? Yawn.
275not599 29 August 2019

There's so much more to towing

There's so much more to towing than the grunt to pull the weight.  How strong is the rear end of the chassis, which needs to handle the tongue weight bearing down on it?  How good are the brakes (trailer brakes provide what you might at best politely call "background braking")?  How long is the wheelbase, which needs to resist yawing forces generated by the trailer?  This is especially true when you tow a high-sided trailer like a horse box, because of crosswinds, and their sudden absence when there's a big lorry alongside or when you go under a bridge.  None of this is a reflection on the Tesla X, I have no idea how well it tows.