From £26,4656
Second-generation XV sits on a new platform and is safer and more refined than before, but it suffers from the same problems that plagued its predecessor
Open gallery
Close

This is the new, second-generation model of the Subaru XV, the Japanese brand's smallest SUV, sampled in Europe for the first time ahead of UK sales beginning in January 2018.

You know what you’re going to get with Subaru, and there are no surprises here. The XV combines all-wheel drive, boxer engines and boxy design, as pretty much all of its predecessors have since the brand arrived in the UK three decades ago. As such, it will seem reassuringly familiar to the company’s small but loyal customer base, although it will likely struggle to exert a broader appeal among more lifestyle-ish crossovers.

No matter: Subaru is keen to stress that the XV should still be considered a proper off-roader rather than a pretend one. As such, it has good ground clearance, permanent all-wheel drive instead of a part-time system and hill descent control as standard. That’s enough to stand out as something close to a USP in this segment these days.

Although its design looks very similar to that of the old XV, this car is almost entirely new, in terms of structure at least, sitting on the same Subaru Global Platform that underpins the new Subaru Impreza. As such, it's stronger and considerably safer than its predecessor, having recently received one of the highest NCAP scores recorded to date.

The mechanical side of the package is more familiar. There are only two engines to choose from, both naturally aspirated petrol boxers. Subaru’s soon-to-die horizontally opposed diesel won’t be offered. The entry-level 1.6-litre has just 110bhp, while the 2.0-litre makes a more respectable 151bhp.

A six-speed manual gearbox is offered in some markets, but it won’t be coming to Europe, with a CVT automatic our only choice. Apparently, this is because the manual won’t work with Subaru’s active safety Eyesight system, a vital part of that NCAP rating. 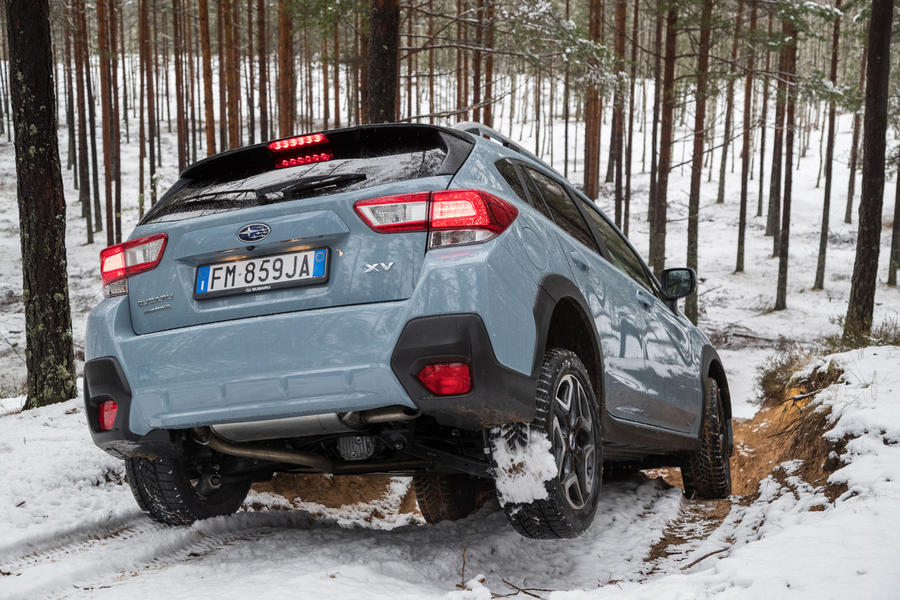 While there’s still much to like about the XV, including the fact that Subaru is one of an ever decreasing number of car makers to offer something truly different, there are some fairly substantial flaws as well.

Principal among those is the powertrain. There’s no surprise that the entry-level 1.6-litre is gutless; Subaru admits to a yawning 13.9sec 0-62mph time, and on the road, the engine lacks both punch and sparkle. Overtaking moves that would be effortless in almost any other car become marginal in this XV. Subaru acknowledges that its appeal will be limited, reckoning it will likely take less than 20% of British XV sales.

And although the 2.0-litre unit is better, it’s still not very good. It lacks the low-down torque of its turbocharged rivals – at the last count, all of them – and needs to be pushed hard to deliver good acceleration. The motor sounds loud and surprisingly harsh when extended, with none of the aural appeal that used to characterise Subaru’s products. It takes a perverse talent to make a boxer engine sound this ordinary.

The gearbox is decent by CVT standards. That's faint praise indeed, but despite having seven programmed 'ratios' to try and make it feel like a conventional automatic, it still suffers from slurred changes under harder use and slushy reactions that negate the engine’s crisp responses. This is particularly noticeable off-road, where it becomes hard to regulate speed when trying to crawl over lumpier obstacles.

As we've said, though, there are still plenty of good things about the XV. It handles with a tidy competence and a lack of slop; understeer is resisted impressively well for something a car of size and shape, and the all-wheel drive system finds impressive traction even when asked to deal with mud and snow. This XV is much more refined than its predecessor at cruising speeds and rides extremely well, too, soaking up broken surfaces at speeds that would shake most crossovers to pieces.

It’s practical, too, with decent space in both the front and back as well as a well-proportioned boot. The interior design still feels pretty old-fashioned, but materials feel a measure plusher than the scratchy ones in the old XV.

The Eyesight system works well, too, spotting obstacles and reacting without ever seeming over-keen. 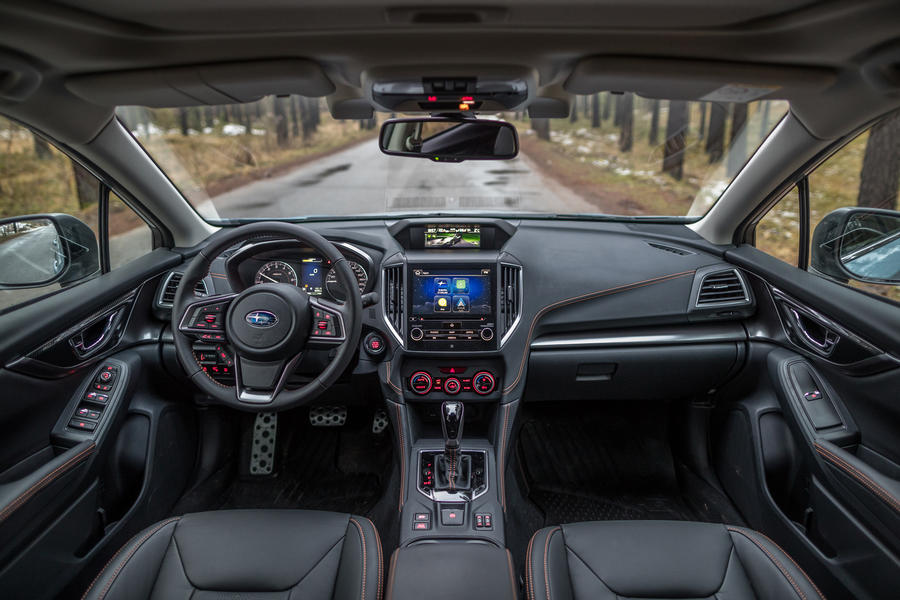 Standard equipment is generous and, with that factored in, the XV looks like reasonable value compared to crossover alternatives. Even the entry-level 1.6 SE gets Eyesight, active headlights and an infotainment touchscreen with Android and Apple integration. Plusher SE Premium adds leather trim, electrically adjustable seats and a sunroof.

But the XV feels like a sermon delivered to the choir, a car aimed squarely at the brand’s faithful followers. Anyone coming from the previous XV or an older Subaru will find a car that is incrementally improved in almost every regard. But it doesn't do much to broaden the brand’s appeal to less ardent believers, with indifferent performance, poor fuel economy, uncompetitive CO2 emissions and an unaccomplished gearbox, plus a design that’s more utilitarian than chic.

A turbocharged engine will be introduced reasonably soon, and that will likely improve matters, but if Subaru wants to improve on its miniscule 0.2% share of the UK's new car market, it will have to create cars with more mainstream appeal than this. 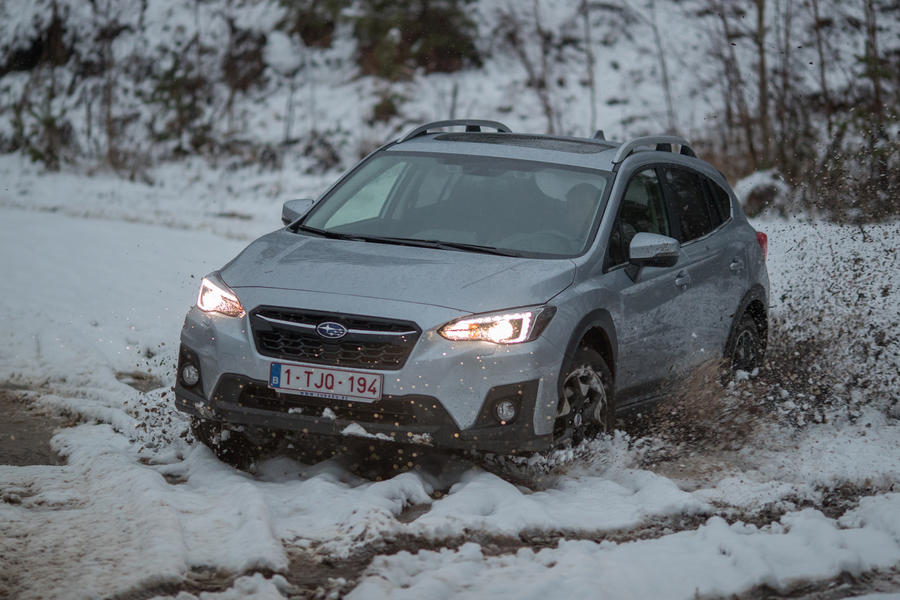 Subaru XV-better than you have just read

Just bought a Subaru XV after 45 years of Hondas. Superb car, and frankly I do not recognise it from this lukewarm review. The engine has sufficient power from the 2 litre engine to keep out of trouble and is every bit as good as the 2 litre on my previous Honda CR-V. Torque is fine for my needs, the CVT/engine combination provides more engine breaking that the old CR-V auto, and as for the sound of that flat-four under exceleration-wonderful! Sounds like a Ferrari under full power, and probably the best sound I have heard in a sensibly priced car for the past decade since my last Honda with its VTEC 1.6i-16 engine.  Feels as solid as the CR-V, but rides better, is quieter, and has more precise turn-in under fast cornering, with little roll.

So do as I did. Take one for a test drive and see for yourself. Not every 'professional' road test will tell you what you can find out yourself. Plus you have something in the UK that is a bit different-in the US you can't move for them they are so popular. Good engineering and solidly built, with sensible electronic aids that you can turn off if you so desire. Personally I found the eyesight system a little intrusive when I road-tested an XV earlier this year, but now I realise the roads and conditions that I encountered were not suited to the system ( having read the handbook!), so it stays off at present. Good for motorways in good weather, but otherwise....no.

I like Subarus, and I have had a lot of them. Imprezas, 5 legacies and even a TriBeCa. I like the shape of the xv and actually I like a simple interior, one which may not be soft touch but is hard wearing nad practical. Suits the car and makes it easy to live with.

I could not buy at this price, or with this engine and gearbox. Bring back the forester turbo. Or do something similar with this. Subaru has limited numbers to sell in the country, and it has to pick its targets carefully. OAPs seem to love em, probably the cvt, nowt wrong with that. Know your market and sell on.

Also, if you don't like autocar's journalistic position, autoexpress or what car awaits you gratefully. Or not reading autocar at all.

Not a fan of electric but,

I don't think it can come soon enough for Subaru. It would instantly fix the significant power plant and transmission problems. Just buy in an appropriate electric motor and bolt on. The low set boxer serves no real purpose in a vehicle like this and it has no obvious efficiency benefits over a straight four.
leftfield lenny 12 December 2017

Subaru could run with a hybrid or fully electric car on this new platform anytime that they wanted to. Toyota have a controlling stake in Subaru, as well as Suzuki. So the electric and hybrid technollogy is readily available to Subaru, as they and Toyota allegedly share resources and input on their vehicle range.

Oh No They Don't

Toyota don't have a controlling stake in Toyota they bought part of GM's 20% share of Subaru about a decade ago. Apart from this the Mk 2 XV isn't yet on sale yet and won't be on sale until the spring. I'd be surprised if only the CVT auto is the only transmission available on the car along with the 1.6 litre petrol as the smaller engine was only briefly available on this model. It'll be interesting to see what the actual pricing & specs of the Impreza & XV are when it's released early next year

Yes they do. GM dumped it's shares in Subaru many years ago when they were facing bankruptcy, around 2008. Nissan had a stake in FHI until 2001, General Motors (who owned Vauxhall/Opel back then) bought their stake until around 2008. That's why the Saab 9-2x (a Subaru Impreza hatchback and WRX model in all but name and the 9-4, also a reskinned Subaru Tribeca and Buick ceased being sold). Read back on this site about Subaru's history and you'll read that Toyota took a controlling stake in Fuji Heavy Industries (Subaru). FHI now trade as Subaru. They are also co-operating on electrification of vehicles and research and developement of new cars. After over 30 years of selling cars in the UK, you thought that Subaru had got the soft touch interiors right suddenly?

I've followed closely since 1997 and had Subaru's 12 out of the past 16 years, and it's only the lack of interest (maybe they thought that I couldn't afford a new one?) from my local dealer's sales team why I'm not in a newish Subaru now.

Toyota and Subaru have a closer working relationship than just the BRZ and the GT86.