From £19,4708
Is Skoda's smallest SUV a more desirable proposition in flagship Monte Carlo trim? We find out
Open gallery
Close

Monte Carlo. For most people, the name conjures up images of glamorous yacht harbour parties, snooty casinos and a veritable Mecca of motorsport history.

For those more familiar with the more down-to-earth elements of the UK car industry (or maybe just motoring journalists), their mind might also think of Skoda and its use of the storied name as a high-end trim.

There might not seem like much of a link between the most exclusive district of Monaco and the Volkswagen Group’s value-oriented brand, but it’s actually a reference to Skoda’s enviable record at the Monte Carlo Rally.

It’s also hugely popular. Many makers have seen sales of range-topping models rise thanks to the PCP boom making the cost of stepping up to higher trims appear more digestible, and Skoda is no different. Often, Monte Carlo trims are among the best-sellers across the brand's line-up.

It’s no shock, then, that this trim level has been added to another one of Skoda’s latest range additions: the Kamiq. We’re trying what is currently the fastest and most expensive version of the crossover, combining the flagship spec with the 148bhp 1.5-litre TSI petrol unit. 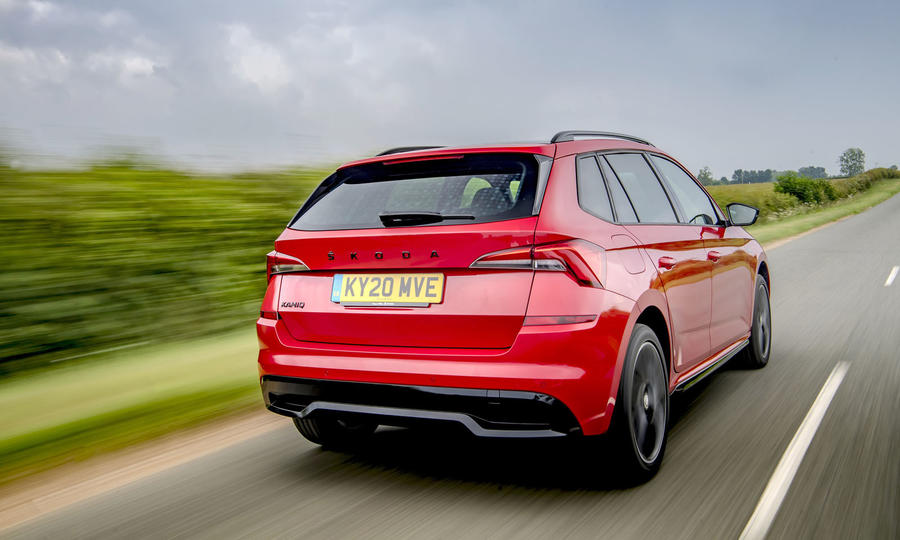 Semi-sporting Monte Carlo spec also has another purpose: attempting to plug some of the holes that might have been properly filled by full-on vRS variants, had Skoda not decided to keep the sub-brand exclusive to the Octavia and Kodiaq for the forseeable.

However, that oversells this Kamiq quite a bit. Fundamentally, the sportiness is superficial because there are no mechanical changes over the regular model, save for the unavoidable effects of bigger 18in wheels. The gloss black contrasting elements do go some way to lift the desirability of what is otherwise a smart and well-proportioned but not visually distinctive design, though.

The same is true of the inside, where racier black and red upholstery is teamed with sports seats that feature comfortable and decently supportive one-piece backrests in the front. There’s also a red-stitched handbrake and steering wheel, plus a line of red plastic trim across the doors and dashboard. Drastic it isn’t, but the detail changes do lift what is otherwise a cabin that prioritises ergonomics over design flourishes. We’ve driven full-on hot hatches with more subtle internal upgrades, so Skoda has done a sound job here.

Although Monte Carlo trim is the most expensive, it’s not strictly a trim that takes all the kit from SE-L spec (one rung below). Some of the SE-L’s kit - such as dual-zone climate control, electrically folding door mirrors and keyless start - becomes optional, but items such as a panoramic sunroof and full-LED headlights with scrolling indicators are brought in. Which you prefer comes down to personal choice, but manual HVAC knobs on a near-£28,000 small Skoda seem a bit mean to us.

This being a Skoda, it’s one of - or quite possibly the - most practical car in its class. It’s a full 10cm longer than the similarly positioned Seat Arona, with clear benefits to rear leg room. It’s also plenty roomy enough up front and the 400-litre boot shows that this is considerably more C-segment than B-segment in its usability.

We’re quite familiar with the 1.5-litre four-cylinder motor, offered on a wide variety of VW Group models. Even the 128bhp version pulls a Golf with conviction, so the 148bhp of this Kamiq makes for quite brisk performance balanced with respectable efficiency.

It’s perky from the off and mid-range punch is effective, which is good because this isn’t an engine that rewards chasing the redline with a zingy note and new-found verve. Rather, it becomes quite strained and intrusive beyond 5000rpm. It’s no vRS by any means, then, despite an overly responsive throttle that takes a little while to get used to.

Generally speaking, this engine and dual-clutch gearbox combo is a fine pairing. Once used to the abrupt throttle (and accepting that it isn’t as silky smooth at low speed as a traditional torque-converter automatic), this tester experienced none of the ‘kangarooing’ effect some readers have previously outlined, and with mild to middling throttle inputs, it slurs changes nicely enough and doesn’t hold on to cogs unnecessarily.

You can catch it out, however, if you aren’t in Sport mode and suddenly demand full power, when it sometimes throws a wobbly, drops one too many cogs then takes a fair time to change up again and maintain the pace.  It's also a bit of a shame that there aren't any of the usual wheel-mounted gearshift paddles in the Kamiq. You can manually change up by toggling the gearshift, but it's not as satisfying or easy.

That’s one of relatively few gripes with the driving experience, though. Feeling much like the raised-up Scala it essentially is, the Kamiq offers steering that responds naturally to inputs, and body control is very respectable for a crossover. It feels taut and composed in most situations, although a Ford Puma is more agile and entertaining still.

Granted, putting 18in wheels on a smallish car, one already more stiffly suspended than the hatch on which it’s based to account for the taller body, is rarely desirable from a ride comfort perspective. And, sure enough, there’s just a fraction more low-speed bump-thump and awareness in the cabin of the road's sharp ridges than we’d like. Some road roar is noticeable at speed, too.

However, for the most part, the Kamiq Monte Carlo is a composed and sophisticated steer and its damping improves with speed to offer a tied-down feel on undulating roads that something like a Peugeot 2008 couldn’t hope to match.  We also suspect the optional adaptive dampers (not fitted to our test car), which drop the car's ride height by 10mm, will help take the edge off the nastiest potholes. 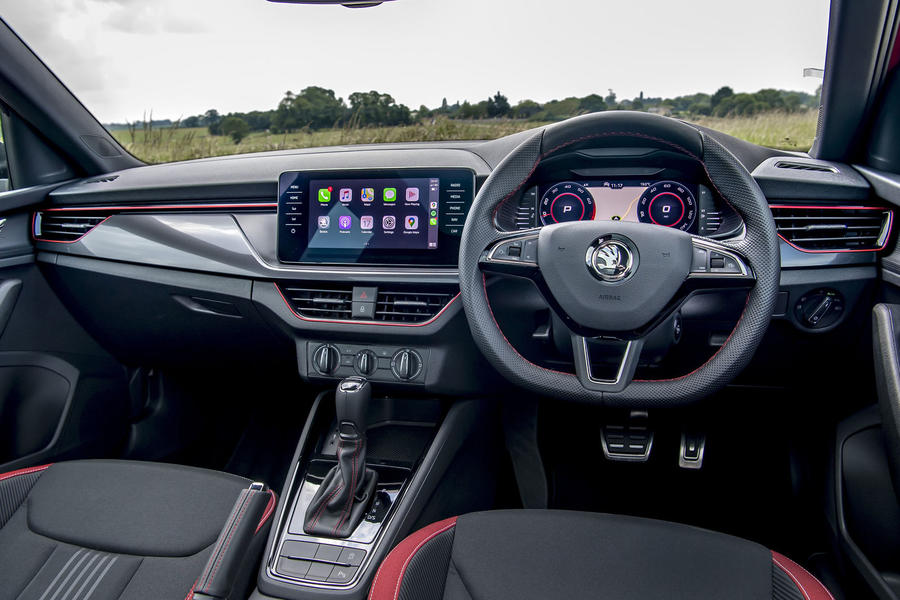 The Kamiq is by no means a revolution in its sector. It’s not hugely exciting to look at or sit in, it’s not quite the dynamic benchmark (you’ll be after a Ford Puma for that) and it's not astonishing value, particularly in Monte Carlo trim.

The 'Jack of all trades, master of none' saying rings true here, but in a more positive context than it might seem. You see, the Kamiq’s balanced Venn diagram of attributes makes it a compelling all-rounder, one that’s pleasingly vice-free and a sound ownership proposition.

Some will criticise it for its almost wilful lack of sparkle or character, and rightly so. But on the basis that fitness for purpose matters at this, more functional end of the market, it has nailed the brief. Punchy performance and extra desirability of Monte Carlo trim aside, however, these attributes are perhaps better appreciated further down the range. 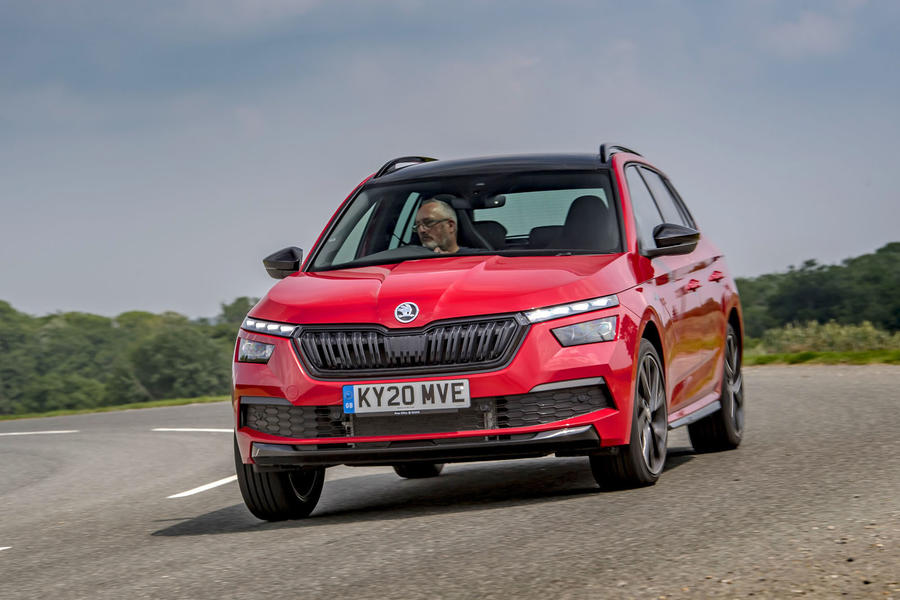 At present I drive a SEAT IBIZA FR with that engine and a 6-speed manual: an absolute delight to use the well-spaced ratios for relaxed or torque-rich or power application on demand!

It is a lot of fun to push the car into corners in 3rd, exit at about 100kph and slot straight into 6th for the long and boring straight with radar goons lurking... AND you should see the faces on some drivers left behind as the little car goes around limpet-like (I opted for 17 inch and dropped the pressures by 300 grams).

My only gripe is that the power delivery can be linear in 'Normal' mode and too gentle in 'Economy' mode; otherwise, a pearl of an engine and kind on the Insurance premium, too!

At present I drive a SEAT IBIZA FR with that engine and a 6-speed manual: an absolute delight to use the well-spaced ratios for relaxed or torque-rich or power application on demand!

It is a lot of fun to push the car into corners in 3rd, exit at about 100kph and slot straight into 6th for the long and boring straight with radar goons lurking... AND you should see the faces on some drivers left behind as the little car goes around limpet-like (I opted for 17 inch and dropped the pressures by 300 grams).

My only gripe is that the power delivery can be linear in 'Normal' mode and too gentle in 'Economy' mode; otherwise, a pearl of an engine and kind on the Insurance premium, too!

Cool story bro. I'm glad you're enjoying your car but I doubt those other drivers you mention are that bothered.

Thanks for this; I did say 'some' drivers: here, in Portugal, some drivers believe that they have the right to be 'intimate' with your exhaust pipe (I have actually been rear-ended once!) and it is those drivers who seem baffled when the little de-badged IBIZA scoots away at a rate...

Repeat at the next corner: the radar goons will charge you €150 on the spot if they catch you, so easy on straight lines! Quite satisfying...

18in wheels! Gloss black plastic! Scrolling indicators! This is a miserable machine dressed up in predictable 'premium' features... all so depressing. I pity those who end up with one. Could you not make a better or more imaginative choice?

Skoda and Monte Carlo. Those are two names I never thought would go back to back.

That's clever subliminal marketing if ever was.