From £8,8456
The Twingo GT is the most enjoyable to drive Twingo there is, but it's not enough to warrant buying one before better rivals
Open gallery
Close

A low-weight, rear-wheel-drive, rear-engined French hatchback with forced induction: sounds like the perfect recipe for an engaging city car, no? Well, that’s what we hoped for when the latest generation of Twingo was unveiled at the 2014 Geneva motor show. Sharing a structural design with some of Renault Sport's most famous sports cars, such as the iconic Clio V6, the Twingo promised everything from engaging handling to impressive levels of practicality.

Unfortunately, the car we ended up with felt closer in character to a Renault Dauphine than an R5 Turbo. The steering was decidedly vague, straight-line performance was modest and that innovative and potentially playful chassis was set up for safe and predictable understeer. In short, Renault had failed to make the most of a platform that we knew could do better. 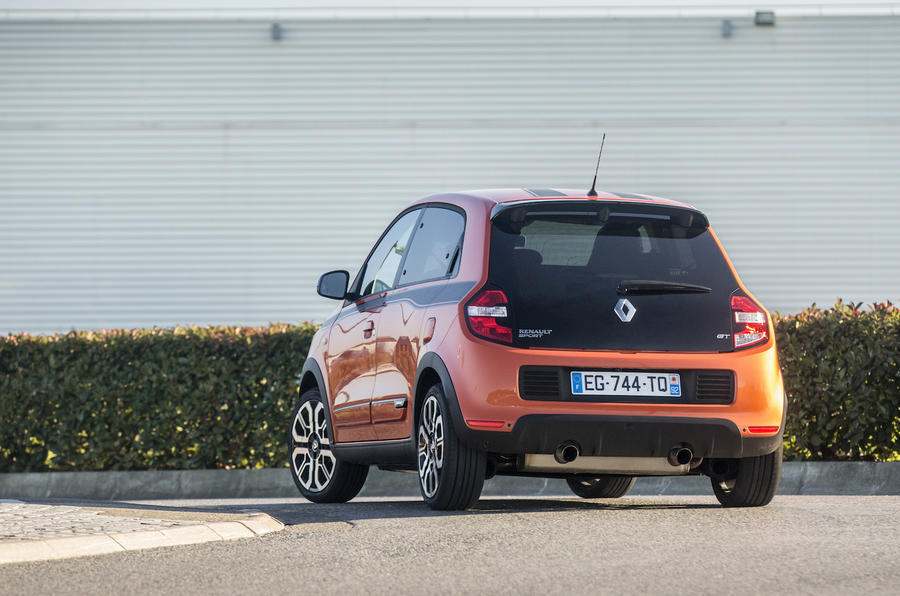 Two years on from the Twingo’s initial launch, however, it looks like Renault has recognised the error of its ways. Handing the reins over to the talented guys at Renault Sport, the new Twingo GT hopes to emulate the success of the previous-generation Twingo 133 Renault Sport, a car we loved for its frisky handling and easily accessible performance.

Starting with a strong platform (in theory, at least), the team have fettled rather than replaced. With no space to fit a new engine, the strongest motor in the current line-up, an 898cc turbocharged triple, has been treated to a revised air intake, a stronger turbocharger and new engine mapping. Combined with a new exhaust system, power is up to 108bhp while torque rises to 125lb ft – that’s 19bhp and 25lb ft more than the current most powerful Twingo. 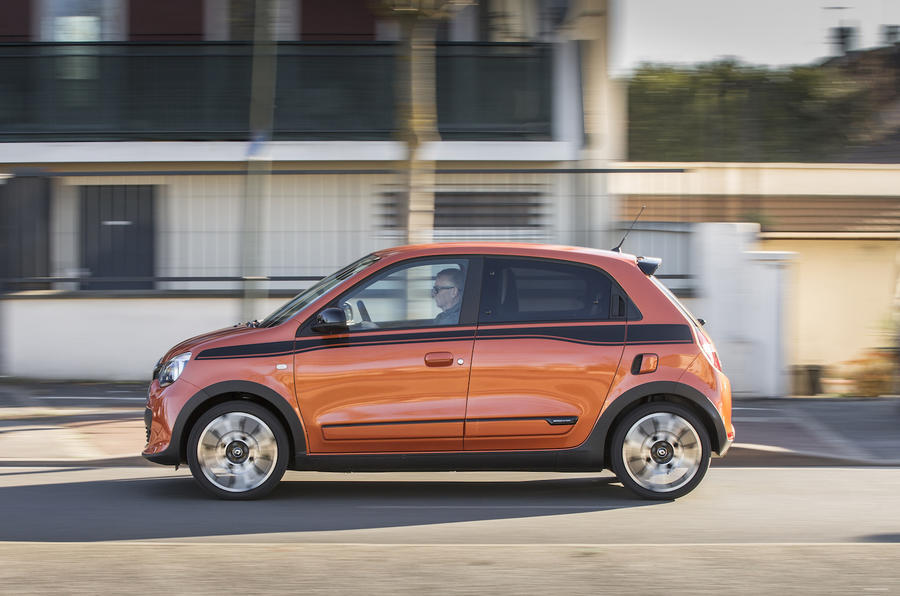 Turn the key and the 0.9-litre engine fires into life with a distinctive offbeat three-cylinder thrum. It’s noticeably louder than the standard car thanks to a new twin-pipe sports exhaust, but it’s not as sonorous as the characterful triple found in the new 1.0-litre Fiesta ST-Line.

Plant your right foot, however, and the engine impresses with its new-found willingness to pull from lower revs. Thanks to shorter gear ratios and a revised turbocharger, the GT feels positively sprightly on Paris’s tight and technical inner-city streets, accelerating with far more urgency than the lesser engines in the range.

The engine's response isn’t perfect, though. Boost comes in quite abruptly at 2000rpm, and even if you’re higher up in the rev range, there's a noticeable delay before the engine starts producing usable power. Granted, this isn’t so much of a problem when driving on fast and flowing B-roads, but it can make smooth city driving a challenge when you are continually on and off the throttle. 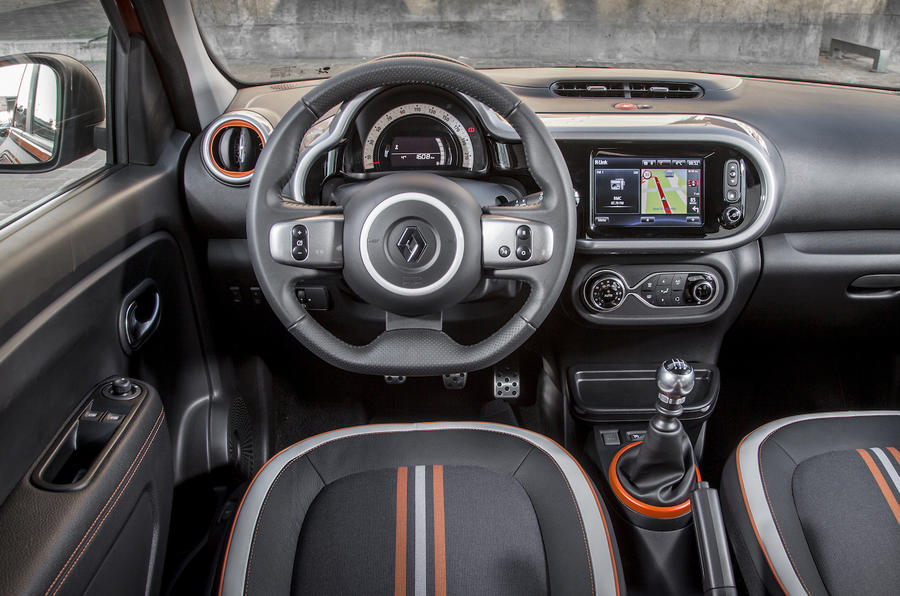 Country roads highlight a different limitation in the form of poor body control. The boffins at Renault Sport may have made tweaks to improve the standard car’s chassis, but it’s certainly no Clio RS. Turn in to a relatively quick bend and the body pitches on its springs, taking a moment or two to settle before it shimmies its way out the other side. Throw in a mid-corner bump and the resultant instability can be enough to trigger the retuned ESP.

With variable-ratio steering, it feels rather darty, too, a characteristic we suspect we’d enjoy if only there was more feedback through the wheel. Push on in a tight corner and it’s almost impossible to judge where the limit of grip is, with virtually no change of weight communicated through the rim.

Ultimately, the Twingo still feels most at home in the city, the environment in which the platform was designed to excel. With light steering, an 8.9m turning circle and short overhangs, you’d be hard pushed to find something more manoeuvrable this side of a black cab. And somewhat surprisingly, the ride hasn’t suffered too badly from the retuned suspension or the whopping 17in wheels. 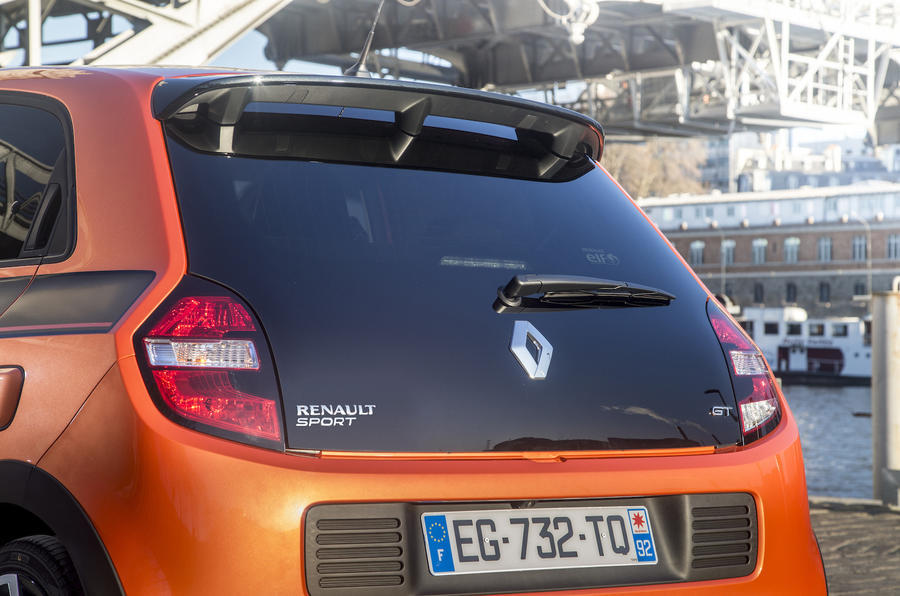 With Renault confirming earlier this year that a proper RS version is off the cards, the GT is the fastest, most driver-focused Twingo that’ll be offered. But should you buy one?

Well, we’d recommend thinking carefully about what you’d be passing up before you do. Yes, £13,795 isn’t an unreasonable sticker price for a lukewarm hatch with a sub-10.0sec 0-60mph time, but there’s precious little joy to be had from driving the GT quickly. And that, we’d argue, is the whole point.

We reckon you’d have more fun in the cheaper-to-buy, cheaper-to-insure VW Up 1.0 TSI 90. Or if you can stretch the budget by a grand or so, there’s the stellar Swift Sport or Ford Fiesta Ecoboost ST-Line. Both of those are bigger, faster and vastly more dynamically interesting.

I like rear-engined Renaults. I wanted to like this one but the steering & handling balance flaws are severe.
Hopefully a later "facelifted" model will remediate these matters.

It should be better than it appears to be

I quite like the look of it, not an over-styled design, with a nice silhouette and a bright and perky interior. But it sounds as if they've got the suspension all wrong and it's too jiggly and bouncy on bumpy roads yet lacking grip in tight corners. Bit of a shame, because 113mph, 9.6 seconds and 54mpg is a sensible mix.
superstevie 2 December 2016

I love the look of this, and

I love the look of this, and the layout of the engine/drive, but I am disappointed that it isn't as good to drive as it should be. Still, makes more sense than the forfour brabus, which is ridiculously expensive!
View all comments (6)