It seems rather bonkers, at least in my mind, that we today find ourselves in a place where a car that can make as much as 563bhp can be considered ‘entry level’.

Ten years ago, you would have had to look to something mid-engined, and preferably Italian, to find those sorts of numbers. And if you wanted that sort of power and seating for four? Well, you’d have to look at the maddest, baddest and most expensive AMG Mercs and RS Audis to find it.

But in the case of this Porsche Taycan 4S, 563bhp is where things get started here in the UK. And for what it’s worth, this £83,367 four-door sports car doesn’t always develop that headline figure.

The junior Taycan’s full 563bhp is available only during launch control starts, and only if you specify the £4613 Performance Battery Plus - which you absolutely should. Not only does the claimed range jump from 257 to 288 miles, but the combined output of its twin electric motors under regular running conditions also increases from 429bhp to 483bhp. Maximum torque, meanwhile, stands at 479lb ft. 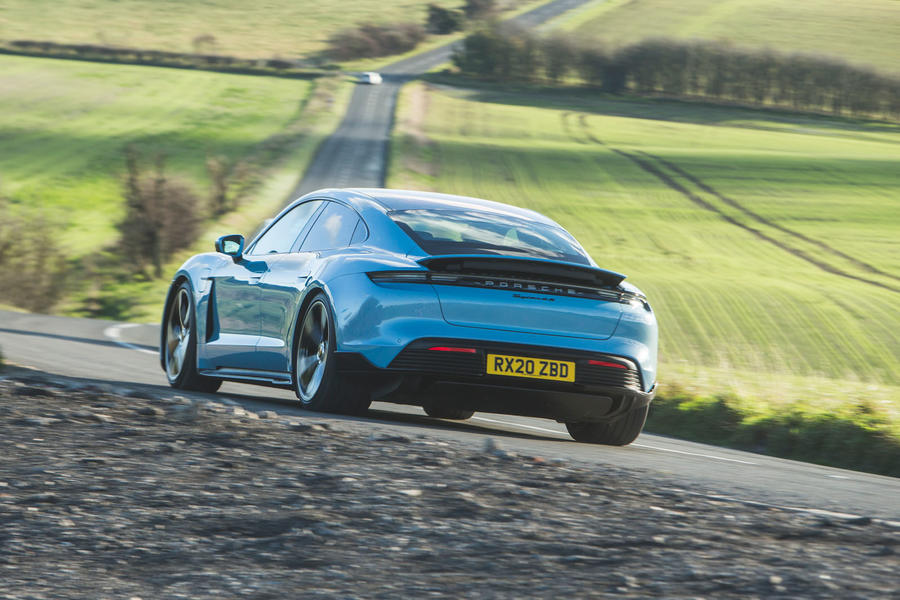 Out on the road, that’s still more than enough to make the 2.2-tonne Taycan 4S feel unbelievably rapid. A stab of right foot will cause it to catapult forwards with all the frenetic urgency of a startled moggy. You wouldn’t ever accuse this car of feeling slow and I can’t imagine many people would genuinely want more power for any reason other than to show off to their mates.

Of course, that’s not to say this electric Porsche is a tricky car to drive smoothly, or in a fashion that won’t see you lose your licence before you can say “270kW rapid-charging capability”. Gentle, considered inputs will allow it to step off and then accelerate very smoothly indeed, and the exceptionally linear power delivery of its twin electric motors instils an immensely satisfying sense of control over the car’s forward movements. And unless you turn its steering-wheel-mounted drive mode selector to Sport Plus to amplify the synthetic, starship-like whirring it generates under throttle, acceleration is almost silent.

The same three-chamber air suspension that appears on the mad-dog Turbo and Turbo S models is also fitted here, so the 4S remains exceptionally controlled in its body movements and impressively comfortable in its rolling refinement, too. Even on our often poorly maintained roads, and even with its suspension dialled up into its firmest setting, the Taycan rides with impressive civility. Bumps are filtered out smartly, and there’s very little suspension noise to be heard, either. With the right attitude and reliable access to rapid charging, you could very easily drive a long way in the Taycan and not find it that tiring at all.

That’s all well and good, but the Taycan’s most impressive party trick is the way it conducts itself when you show it a few corners. Its steering responses are lightning quick, and the manner in which it disguises its mass and changes direction so effortlessly and immediately leaves you marvelling at the near-physics-deying engineering know-how that has enabled it. That this agility is complemented by huge grip levels, a steering rack that’s both accurate and really nicely weighted, and stout lateral body control only impresses further. You’ll be wearing a rather stunned look on your face following your first good drive in a Taycan, that’s for sure.

But once you get acclimated to what the car can do, and the novelty of its ridiculous straight-line punch wears off, I’m not sure you’d look back as fondly on a good drive in the Taycan as you might on one in, say, a Mazda MX-5. Or a 718 Boxster GTS, for that matter.

The 4S would undoubtedly be quicker across country than either of those cars, but it’d probably be the least immersive. After all, you’re only ever required to make a maximum of three inputs: accelerating, braking, and changing direction. And while that’s really only two fewer than those you’d make in those manual-transmission convertibles, you do notice just how much less you have to do behind the wheel. Surely, that’s got to count for something in what is still, after all, supposed to be a driver-focused sports car. 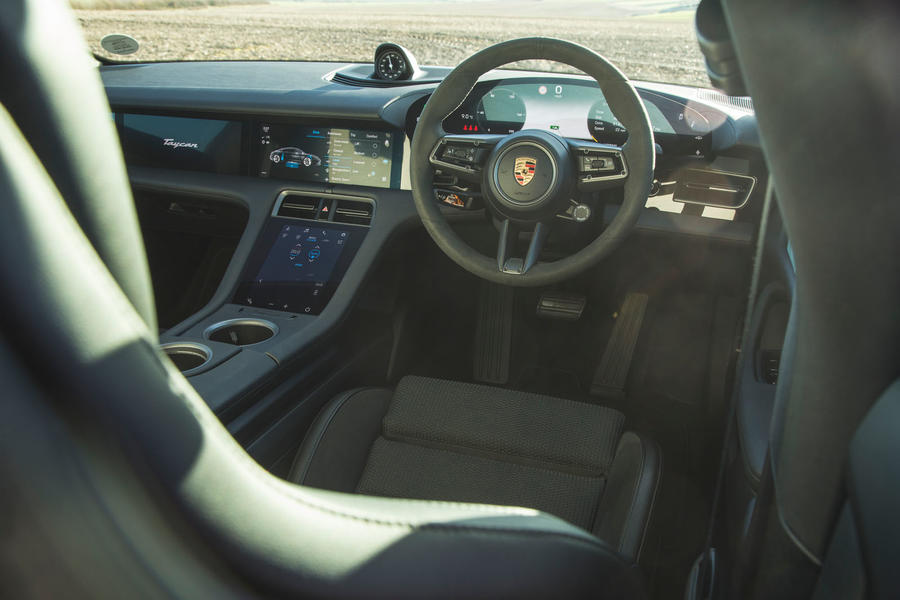 But even so, by the standards of current EVs the Porsche remains in a class of its own for what it can do on a good, challenging road. And whatever your thoughts on electric cars might be, that fact alone warrants a healthy amount of praise, and conjures healthy optimism about the sort of cars the future might hold.

That said, there is a small ‘however’ that needs to be applied to this particular test car. As dynamically impressive as it undoubtedly is, some of that talent will be a direct consequence of the fact that it came equipped with rear-wheel steering (£1,650), Porsche Torque Vectoring Plus (£1,052) and the Sport Chrono package (£788).

Along with the bigger battery, these options effectively raise the Taycan 4S’s asking price to £91,470 - which isn’t exactly an insignificant jump up from that £83,367 starting figure. For what it’s worth, it’d be instructive to drive a Taycan without all of those additional bits and pieces, just to see how much of a difference they ultimately make on the overall driving experience.

But even at that elevated price, the Taycan 4S still looks like an exceptionally compelling deal against its direct rivals. A Tesla Model S Performance (£89,980) will be quicker but nowhere near as good to drive. The Audi e-Tron GT, meanwhile, will be similarly talented by dint of the fact that it shares its architecture with the Porsche, but it’s expected to cost around £100,000 when it lands next year.

So the Taycan 4S still finds itself in an enviable sweet spot. And if you’re in the market for a fast, practical and talented electric sports car, it remains the smart choice by quite a margin. 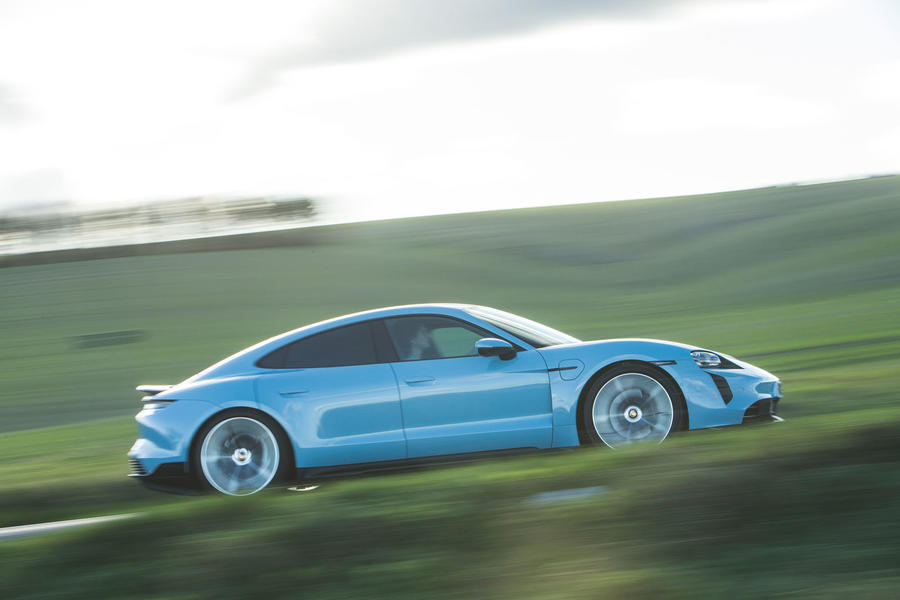 I'd like to know how many miles you can drive with the Taycan 4S, when you want to make a longer journey and cruise on a motorway respecting the speed limit. And how long can e.g. a Tesla?

Why that? If I drive in a so called sporty style, I practically never will make more than 80 or 100 miles - and there the range has a minor importance. But when the target is reaching the holiday destination far away, then the range really is important

4foxtrot 8 December 2020
Snag is it's the same size as s range rover without the better view so that almost eliminates it for fun twisty b roads.

Leave those to Boxsters and Caymen and Lotus. Or their future silent faster Electric versions ! For now only the smaller, faster Model 3 will do ...

Why the incessant complaints about the demise of manual gearboxes in sports cars?

It's childish and boring to want to cling to old technology like that. You will want wind-up windows and string-backed gloves next!

In 90% of driving situations a modern automatic (be it DCT or torque convertor) is quicker, more economical and smoother than a manual and leaves you much less tired after a long drive.

If you really want to intervene, you have the paddles, but with a car of this performance that will be rarely needed and allows you to keep your hands on the wheel for better placement and control.