This, allegedly, is the year of the electric car. “Wait, wasn’t that last year, or the year before?” I hear you cry. Well, this time, we’re inclined to believe it. Or rather we were, were it not for a certain global pandemic forcing mass factory shutdowns and sending car company shares plunging at an alarming rate.

Trying to do this in a slowdown economy, where most people aren’t allowed to go to work and dealers are almost entirely off limits, is a near-impossible task. Estimates for new car sales in the coming months are bleak at best, understandably so, and this could put some makers in precarious financial situations.

But, hey, there’s enough doom and gloom around these days. The new, all-electric Porsche Taycan is finally here, on British roads, and that’s something to celebrate, if our verdicts from launches abroad (remember going abroad?) are anything to go by.

Having most recently driven the current ‘base’ Porsche Taycan 4S – and with a Porsche Taycan Turbo S set to undergo Autocar’s full road test treatment in the coming weeks, we find ourselves sliding behind the wheel of the middling Turbo. Not that 671bhp and nearly £116,000 really justifies the use of the term ‘middling’.

Customers for a car in this price range – people who are unlikely to baulk at the £23,000 jump from Turbo to Turbo S – may see the 81bhp deficit between this and the S as substantial. But, actually, both cars reserve this maximum power rate for full-bore launch mode. In normal driving, both Turbo and Turbo S make an identical 617bhp. 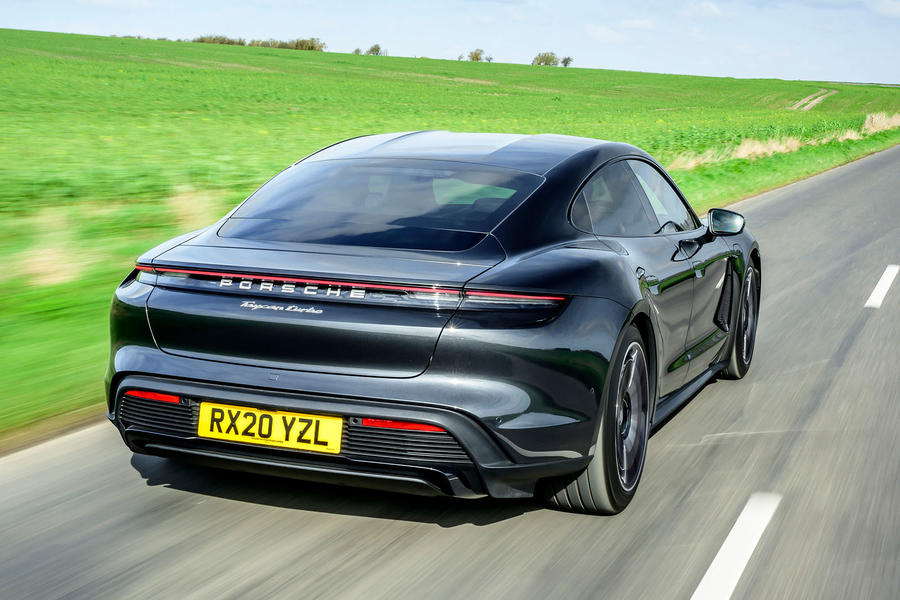 Certainly, there wasn’t a single second during our four-hour drive around south-east England’s most enjoyable Tarmac when the Taycan Turbo's power reserve wasn’t ample to the point of being excessive.

Of course, being battery powered, the pick-up is instantaneous and relentless in any situation, but unlike some EVs, there doesn’t seem to be any let-up at higher speeds. Be in no doubt that only a smattering of road-legal cars (and certainly very few with four usable seats) could keep up with the Taycan Turbo in the real world. Launch control (Sport Plus, left foot hard on brake, right foot on throttle) brings full power and ensuing seat-pinning hilarity.

Porsche has also engineered in some not unwelcome motor whirr to stimulate the ears under acceleration, but the optional Electric Sport Sound (standard on the Turbo S) dials it up further with some sci-fi whooshing and power-up noises. This may sound cringeworthy, but actually it adds an appealing aural reference as the numbers come thick and fast on the dials.

So it’s a Tesla-botherer in a straight line. We knew that already, but where Porsche carries the baton farther than EV rivals is in the Taycan’s chassis tuning. It’s reassuring to know that the remarkable blend of cornering composure and usability rings true even on pockmarked UK Tarmac.

Let’s start with ride comfort, which sits somewhere between the taut plushness of a Porsche Panamera and the purposeful firmness of a Porsche 911. In normal mode with the adaptive air suspension at its softest, it does a passable impression of an executive saloon, and although really battered surfaces still send the odd jolt through the body, it’s less unsettled -particularly at low speed - than a Mercedes-AMG E63. With the 20in wheels and Michelin Pilot Sport 4S tyres of our test car, tyre noise is also much more subdued than in a 911, for example.

But, crucially, is the Taycan a sports car? Well, it's certainly the most dynamically convincing four-seat EV we’ve yet driven. It takes 10 minutes on a favourite B-road to discover what an unprecedented job Porsche has done in disguising the Taycan’s 2.3-tonne kerb weight. It feels lighter on its feet than a Panamera, despite being nigh-on 300kg heavier, with sharp turn-in and unflappable body control.

Our car has optional Dynamic Chassis Control, bringing active roll stabilisation, which likely helped matters. Only in extreme direction changes can you subtly detect the substantial weight transfer in action. The torque-vectoring four-wheel drive also makes traction nigh-on impossible to break on the road, although there’s a detectable sense of rear-biased power delivery on the exit of corners.

The steering feels quick but not darty, weighty but consistent. Forward visibility is excellent (although rearward visibility is pretty poor for a saloon, so the car's cameras are vital) and the driving position spot on. Even the turning circle is surprisingly tight, although we've yet to try one without the optional rear-wheel steering.

Brake pedal feel is largely good, too, but as with all regenerative systems, there remain situations where the braking power is slightly out of step with your input. The coasting regeneration is relatively mild because Porsche wants driving the Taycan to be a two-pedal experience, although it can be adjusted depending on drive mode.

Overall? No, it isn’t as much fun to drive as a 911 and it stops short of hitting that benchmark a sports car must aim for. But for an EV of this type to be so close to a car more than three-quarters of a tonne lighter is something we must highly commend the engineers in Stuttgart for achieving. 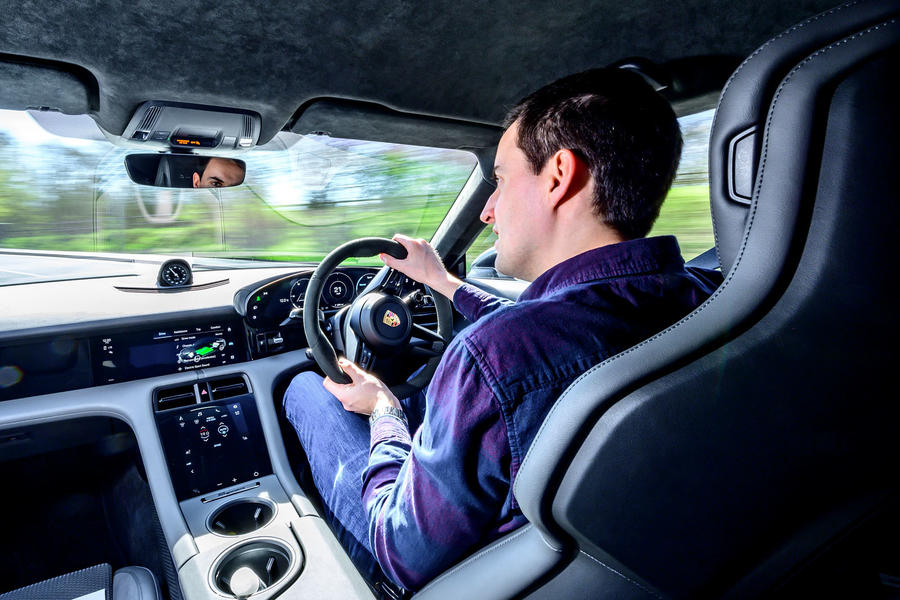 What makes the Taycan so utterly compelling is that, once you've finished marvelling at what it can do on the road, it becomes perfectly usable everyday transport.

The svelte shape means it lacks the cavernous luggage capacity of a Tesla Model S, but there's plenty of space up front for this 6ft 3 driver, and two average-sized adults will find few complaints in the rear. The interior is also typical Porsche: not lavish, but near faultless in build standard and ergonomic execution, because despite the greater reliance on screens, everything is ordered logically. The wraparound instrument panel is pure class yet always legible, too.

The only area in which the Taycan doesn't have the measure of rivals is range – crucial for many. Its 800V tech means an 80% charge is possible (with a 350kW charger, of which only a handful currently operate in the UK) in as little as 22 minutes. Yet while the Turbo’s quoted 279-mile figure isn't bad and seems realistic from our driving experience, the Tesla Model S Performance claims to go 88 miles further on a charge.

The price and only so-so range hold it back, but there's no doubt the Taycan is the new dynamic benchmark for electric performance saloons - a Model S doesn't come close once straight-line pace is taken out of the equation. Most people will be entirely satisfied by the 4S, which can also be specced with the bigger, 93kWh battery tested here. But if performance is a priority, we foresee few scenarios where you'll wish you'd coughed up the extra for a Turbo S. 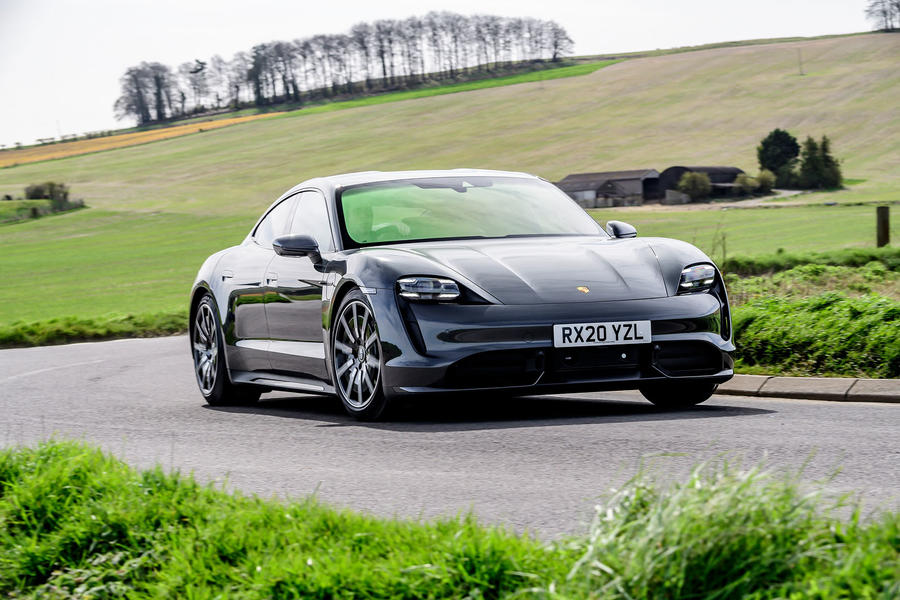 Seem to be in the minority here.
4 1/2 stars.
I have to add though, it'll probably be it's mid-life facelift when we'll see a few upgrades that hopefully address the comments above. So a long wait then.
Boris9119 27 March 2020

Range is No Problem

Range is no problem for most buyers at this price point. In my area, most Porsche Panamera buyers also have say a Slade and an SL, so no it matters not to most owners.