From £63,9138
Still the most satisfying Panamera to drive, but not necessarily the one you should buy
Open gallery
Close

Ever since Porsche rejuvenated the ‘Gran Turismo Sport’ moniker for the modern era, hardcore GT-division wares aside, it’s been the derivative to have. No wonder you can buy the Porsche 911, Boxster, Cayman, Porsche Macan, Porsche Cayenne and this, the mighty Panamera, all in GTS form.

It was back in 2011 the recipe first made for a particularly desirable version of Porsche’s four-door saloon. Dropping the ride height, stoking the engine closer to range-topping Turbo heights - but retaining glorious natural aspiration - and sprinkling punchy black trim over the sloping hatchback body gave the finest-handling luxury saloon money could buy an added sweetness. Alcantara interior trim and a very reasonable showroom premium didn’t hurt, either.

But now the second-generation Porsche Panamera has come in for a GTS makeover, and while the story is familiar, bluntly speaking it does not whet the appetite in the same way.

For one thing the 4.0-litre 90-degree V8 is now turbocharged like every other engine in the Panamera range. Figures of 454bhp and 457lb ft, delivered almost uninterrupted over a mammoth sweep from 1800 to 6100rpm, point to fairly rampant everyday performance, but this is now a ‘mere’ Turbo motor with the boost dialled down.

Granted, it’ll do a WLTP-certified 27.4mpg combined compared to the old model’s 26.4mpg, which was a figure recorded on the absurdly optimistic NEDC test. Given the new model is not only larger and heavier but also 20bhp more powerful and 0.3sec quicker to 62mph, at 4.1sec, that’s some improvement.

But the GTS was always meant to about more than the numbers, and so it’s a surprise the mechanical modifications are also in short supply outside the engine bay.

The standard-fit air suspension sits the chassis no lower than for any other PDCC-equipped Panamera, though as is also the case for those cars, selecting Sport mode effects a further 18mm and 10mm squat at the front and rear axle respectively. You get thicker anti-roll bars, at least for the non-PDCC base model, but relatively few will buy with such austerity.

For PDCC cars with active anti-roll bars (and a torque-vectoring rear differential) the electronic actuator is instead ordered to massage quite a bit more tension into the setup when required. Damper rates are also up, but the existing hardware remains. The same applies to the sports exhaust, whose software is altered for a bit more muscle-car woofle. All in, the GTS feels a lot like an tuning exercise using code instead of compression testers. 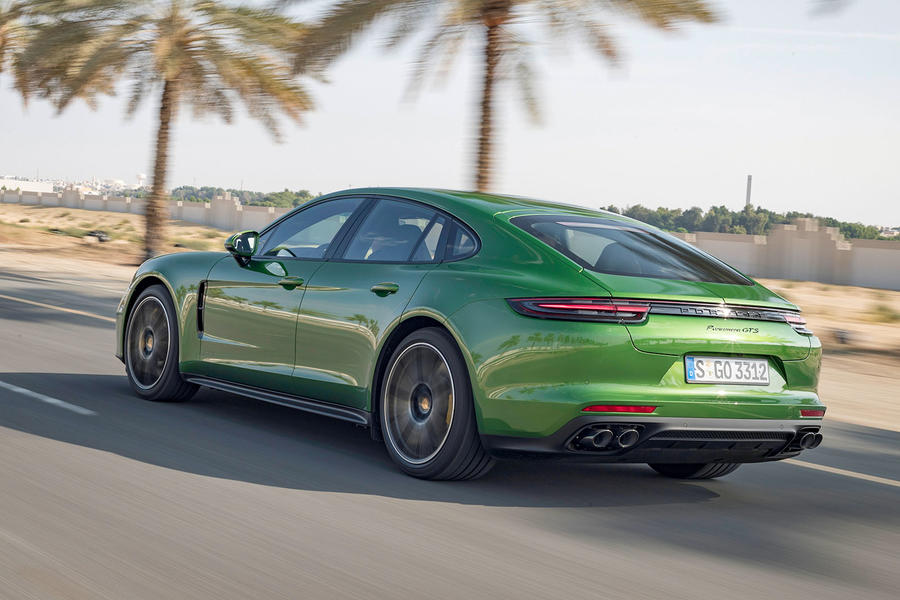 Not that any of this stops the latest Panamera from feeling unnaturally athletic for its 1995kg kerb weight. Our time on the road is limited but stints on track highlight the car's ability to summon truly tenacious grip one moment then indulge the driver with tip-toe poise the next.

Porsche has tuned the four-wheel drive in the GTS to remain rear-biased even after grip turns to slip. Along with an ESP Sport mode calibrated to intervene a moment later, it really shows, with the chassis adopting just a touch of yaw and feeling supremely well balanced in general – at least on track.

Indeed, there are more genial super-saloons, and quicker ones, but no comparable car dials you into the driving experience like a Panamera, and that is more palpable than ever in the GTS. It’s responsive to the sort of subtle throttle inputs lost on other big-boned cars and, thanks to a linear EPAS steering setup you'd be grateful to have in a bona fide sport car, devastatingly accurate right up to the point the Pirelli P Zeros begin to wilt. You’re not conscious of the body control, either, which suggests it is superbly effective.

Caveats? Blemishes, more like. There’s some latency to paddle-prompted shifts from the eight-speed PDK ‘box and, despite a hot-vee configuration, there’s still no question this engine is blown.

Admittedly, our fully loaded test car was equipped with eerily effective rear-wheel steering, the PDCC chassis and carbon ceramic brakes, which together add the cost of a VW Volkswagen Up! to a £105,963 starting point. At £6707 the brakes are simply unneccesary (how many of these cars ever see a track, you wonder), but the rear-steering and sport chassis are certainly beneficial to both the Panamera's useability and capability. We'd have them.

That price, by the way, rises to £108,110 for the more practical (and prettier) Sport Turismo shooting brake model, whose top speed also drops a touch from the coupe’s 181mph. An M5 Competition costs considerably less but lacks the Porsche’s glamour. AMG’s new four-door take on the GT coupe has more presence and certainly wins the battle of perfomance but the asking price is commensurately higher. While expensive, then, the Panamera does find itself in some clear air. 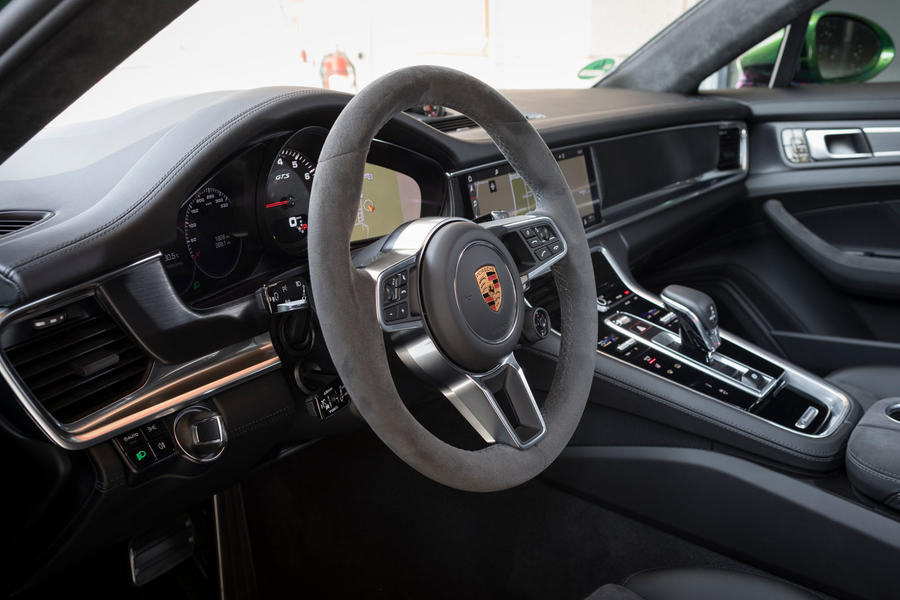 If the GTS leaves you puffing out your cheeks with admiration, as it surely will, then it is also suffers the same affliction as so many modern performance cars. You’ll have to contrive to find any meaningful objective fault, but as the driver your window of opportunity to appreciate Porsche’s detailed changes is simply too high to be relevant on the road.

There’s some technical overkill going on here, and there’s also the fact the ever-present charm of the old 4.8-litre V8 has left the building. Fabulous as the GTS would be own, it leaves us wondering why you’d get one of these instead of the already excellent Panamera 4S.

Ultimately the most satisfying Panamera to drive isn’t as characterful as it once was. Neither is it’s delicacy so easy to appreciate. 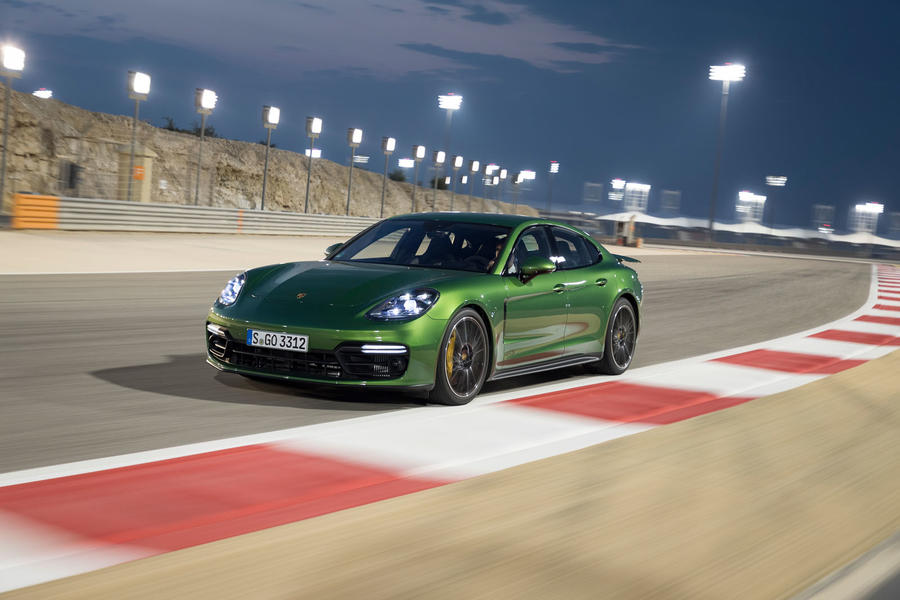 Prominent features with the best reviews.

Wow what a classy car! Lovely

I love this car. I think some valid points have been made reviewing this car.  I personally think that some cars are over-engineered for the majority of folk. Thanks for sharing.

This is my dream car, thats all I've to say..