The latest addition to MG Motor’s range is important for two reasons: primarily because it’s the first electric estate car to go on sale in Europe, and secondly because it will play a vital role in helping the 12-year-old brand to achieve a 50% plug-in car model mix in 2021.

Based on parent company SAIC’s Roewe Ei5 - a big seller in its Chinese home market - the 5 arrives in electric form only. Unlike its ZS sibling, MG bosses deemed the potential European market for a petrol-powered estate to be too small to make its import worthwhile. The brand is quickly transitioning away from combustion power, having shunned diesel some years ago and ushered in a new plug-in version of its HS SUV alongside the 5.

Even before the 5 and HS PHEV arrive in dealerships, MG already has the highest proportional plug-in sales mix of any mainstream car maker with a combustion offering, the ZS EV accounting for 27% of its UK sales. The 5 will play a lead role in the brand’s journey to an all-electric future, working alongside the higher-riding model to bring affordability to a segment that remains predominantly occupied by luxury SUVs, saloons and sports cars.

Brand boss Daniel Gregorious acknowledges that estate car sales have suffered in recent years as buyers flock en masse to higher-riding SUVs, but said that MG is “pioneering a new wave”, with the 5 bringing superior aerodynamics and better handling.

Like its ZS EV sibling, the 5 comes in entry-level Excite trim - from £24,995 - and better-equipped Exclusive trim at £26,995. This puts it roughly on par with similar-sized, conventionally fuelled cars like the Skoda Octavia in range-topping SE L trim and the Ford Focus Estate Titanium, while undercutting its closest electric rivals, the Nissan Leaf and Kia e-Niro, by around £5000.

MG expects half of all 5s sold to go to fleet buyers, with its 0% BIK rating giving a not-inconsiderable edge over its combustion contemporaries, and highlights its 578-litre boot and practical rear seats as an incentive for families on a budget to make the switch to electric. 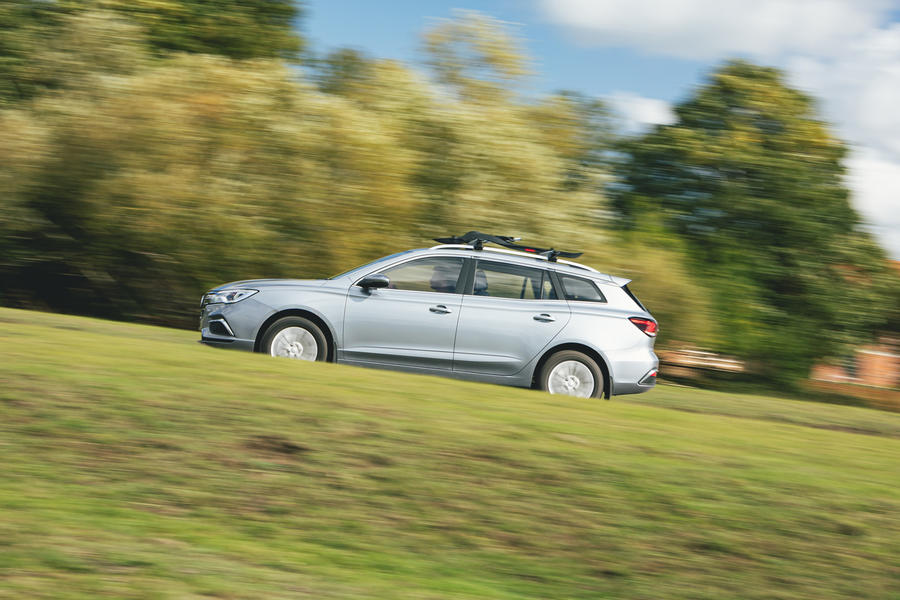 While it occupies an as-yet-unexplored niche, the 5 is unable to fall back on the one-time novelty of an electric powertrain to cultivate appeal across its target market. To be as successful as its zero-emission ZS stablemate, the 5 should offer usability and performance benefits that justify its similar price tag, while tempting budget- and eco-conscious private buyers away from smaller and cheaper EVs like the Renault Zoe and now endangered Volkswagen e-Up.

Its success in this respect is threatened on first glance by its rather inelegant styling, with kinked lower window line, lofty ride height and small 16in alloys creating an awkward stance, and chrome exterior embellishments erring on the sides of both excessive and unnecessary.

Things don’t get off to a great start inside, either, where lacklustre fit and finish combines with scratchy plastics and overly firm seats to create an environment that you might be glad to escape every 200-or-so miles when the time comes to charge the battery. The cluttered, ponderous and unintuitive infotainment interface doesn’t help, but happily MG has seen fit not to implement the maddening array of warning bongs and beeps that afflicted the ZS EV before it was subtly updated in June.

Once under way, the advantages brought by the 154bhp electric powertrain quickly override any initial frustration. Around town, being first away from the lights and zipping assuredly around cyclists makes for a relaxed driving experience. The 5’s thick sidewalls and raised suspension go some way to compensating for the heft of its underfloor battery, meaning it doesn’t thump uncomfortably over potholes and speed bumps.

The steering feels strangely weighty in low-speed manoeuvres but this is largely alleviated by the car’s tight turning circle, which, together with decent all-round visibility and a standard-fitment reversing camera, makes the 5 easier to live with in the city than its size might suggest.

An excitingly labelled ‘KERS’ toggle switch lets you vary the intensity of regenerative deceleration, which in its most extreme setting makes pre-emptive stop-light coasting rather uncomfortable, but has a tangible impact on remaining range and essentially allows for one-pedal operation. With Eco Mode activated as well, the 5 stands a good chance of achieving its maximum rated range on a warm day.

On more open stretches of road, the low centre of gravity means corners can be taken fast and relatively flat, but be under no illusion that this is any more engaging to pilot than the loftier ZS EV. Cornering roll is vastly reduced compared with its stablemate, but there’s an inherited numbness to the steering that puts paid to any spur-of-the-moment B-road antics, and limits the appeal of Sport Mode to the grin-inducing acceleration granted by its sharpened throttle response. But MG, if you hadn’t noticed, hasn’t been a performance brand for 15 years, so it doesn’t do well to dwell on the 5’s dynamic shortcomings - so long as they aren’t carried over to the firm’s long-awaited electric sports car due next year.

More inexcusable are the limitations of the 5’s traction control system, which are as prevalent here as they are in the ZS EV. Even on dry roads, anything more than moderate throttle input off the line or out of slow bends elicits a chirp from the front wheels. Should you see fit to deactivate the traction control completely, it’s possible to spin the driven wheels for several seconds from launch, and the resulting torque steer can be somewhat unnerving. Really, buyers of a 154bhp family estate shouldn’t need to be well-versed in the art of controlling a vehicle at its limit.

Once up to speed, however, the 5 feels well-planted and pleasingly manages to keep both wind and road roar - common afflictions for larger electric cars - in check, thanks to its skinny tyres, high sidewalls and curvy low-slung form. It’s a competent cruiser, and an extended period at 70mph didn’t knock the indicated range down as quickly as you might expect. Officially, MG says the 5 will travel 214 miles between charges, but our test - which took in country roads, motorways and the city centre - suggests 170-180 miles would be more realistic. 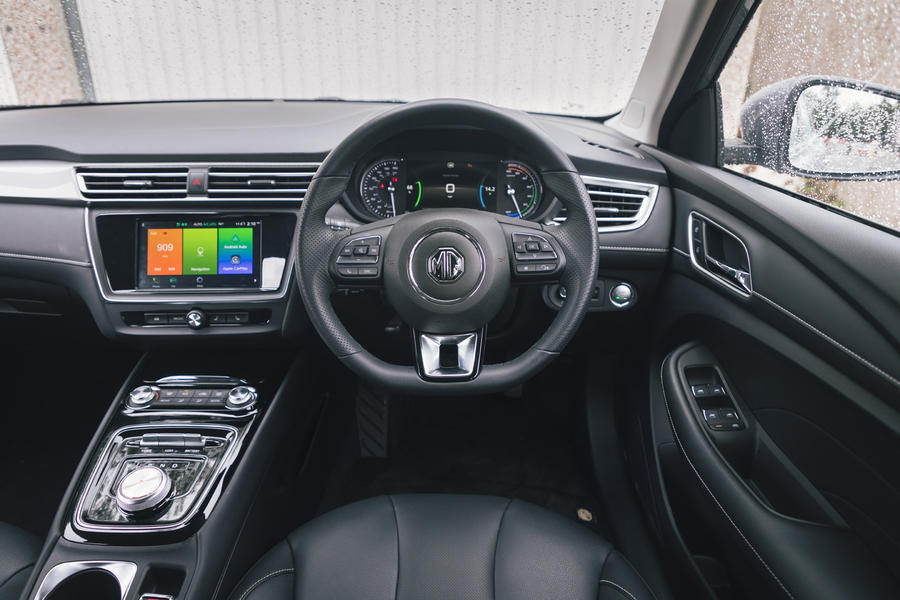 If you, for whatever reason, have held off buying an EV thus far because you simply must have an estate car, you won’t be disappointed by the 5. Its range, while not competitive, makes for a perfectly usable family runaround, and that large boot and back seat will make the transition away from combustion power as painless as possible in practicality terms.

You would have to be quite committed to the prospect of zero-emission motoring, however, because the same money gets you into a nicely specified Ford Focus or Skoda Octavia, against which the 5’s value-oriented interior and anonymous styling are unignorable. It’s a car to buy with the head, rather than the heart, and - for now at least - has its own tiny corner of the market cornered. 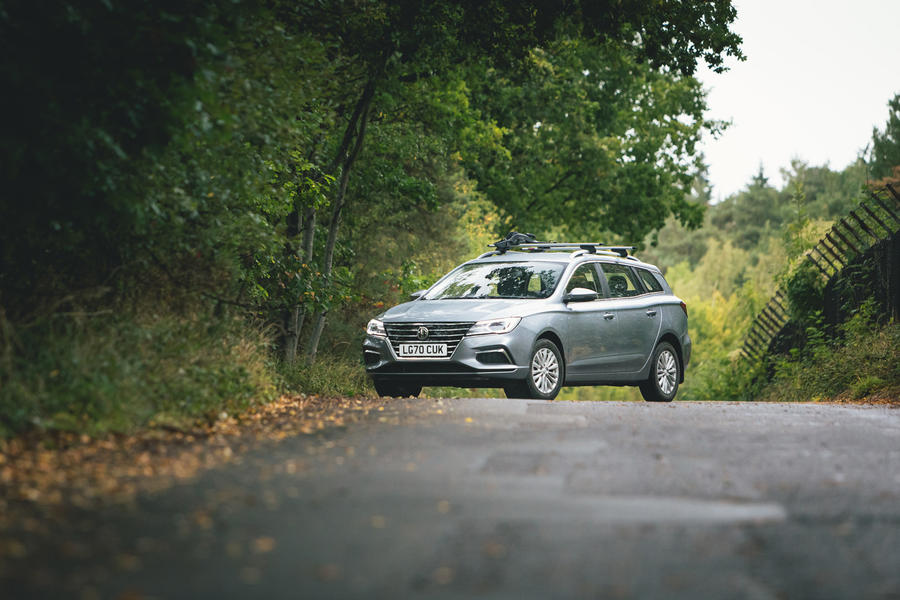 Ignore China at your peril. Europe has been talking the talk about EVs for years, and China just gets on with it. Not a perfect car by any means but an estate car with a WLTP range of 214 miles should appeal to quite a few.

No its not an "MG" but and a bit of an anonymous box, but then so is a lot of other stuff nowadays.

Pity it’s not made in England

If only the B,air government had saved Rover/MG as the French government invested in Peugeot, and look how well the French manufacturer is doing.

I have a newish diesel estate car and already less than two years old it had had a turbo problem.

will buy electric next time, and this MG5 is top of my list for the following reasons

1.no standing at smelly diesel forecourts in terrible weather

4.no injectors to replace

7. no diesel filter to change

The list goes on and on. I have had it with fossil fuelled cars

Isuppose that you could regard the new MG5 as an EV version of the Dacia Logan,in that if you need a lot of space for passengers and luggage  and your budget is limited this is the electric car for you OK it's not the best looking car and the driving experience probably ain't that great, but for £25k you get a 200+ mile range low running costs and a seven year warrenty. SAIC the Chinese owner have positioned it's range of cars in the "value" segment of the market and this way the Japanese and Korean manufacturers managed to break through to the European market. If I were a betting man,I'd lay odds that SAIC/MG are still around in twenty years rather than other Chinese marques like Polestar.

Quite right Ian. Many moan

Quite right Ian. Many moan about how unaffordable electric cars are, particularly cars big enough for a family, yet when one arrives that is within reach of a fair few families motoring budgets and has a usable range an argument breaks out over whether it's an MG or not! Who gives a crap. It's a brand - nothing more.
View all comments (27)