This is the replacement for a car that embodied the style-over-substance phenomenon of crossovers in the first half of the 2010s.

When the Mercedes-Benz GLA landed on the scene in 2014, it wasn’t exactly mould-breaking. Here was a tall hatchback deemed different enough from its Mercedes-Benz A-Class relation to warrant a new name in line with the brand's fully fledged SUVs. In reality, though, it was effectively an A-Class with a rugged styling pack and a bit more space between the wheels and arches.

It was a commercial hit regardless. But at that time, the premium competition was either mediocre or notable for its absence. Jaguar, Lexus and Volvo weren’t really in the market then, while the first Audi Q3 and BMW X1 are unlikely to be looked back on with wistful nostalgia in years to come.

This time around, however, there’s no room for a half-hearted effort. Those cynical bulked-up German hatchbacks have been replaced by fully fledged small SUVs, while all three of the aforementioned no-show brands now have competitive entrants of their own. Mercedes has doubled its compact sector offerings in response, with the boxier, retro-inspired Mercedes-Benz GLB muscling in alongside the more straight-laced GLA.

As before, the fundamental mechanical relationship between A-Class and GLA is a strong one. Both share the same platform, technology and engines, including the range-topping 220d diesel we’re driving here. 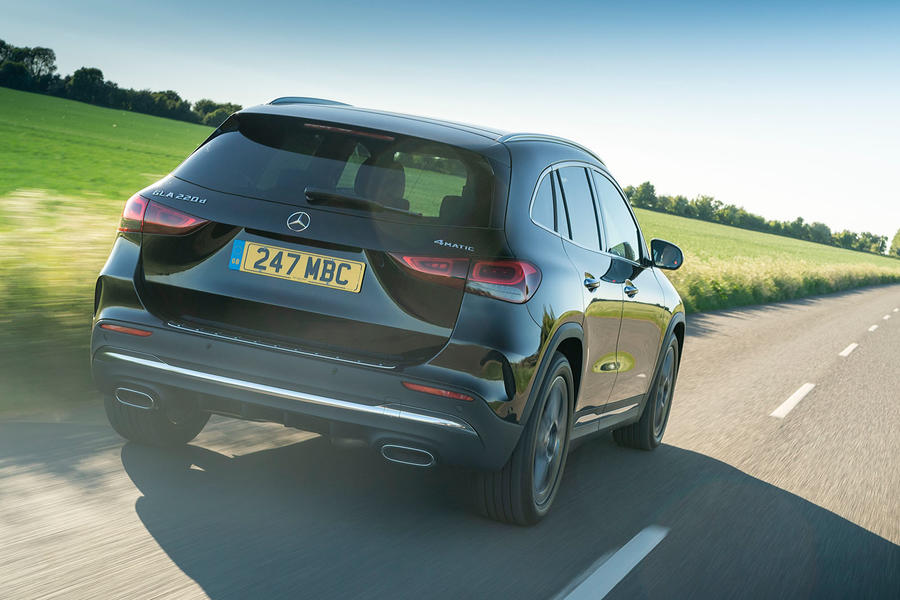 Immediately, the new car looks to be a more considered effort than before. Crucially, it's taller, by a full 104mm, and slightly wider, meaning it shuns the hatchback-on-stilts look of the old car in favour of a more bespoke bodystyle. That does mean there’s more than a hint of Mercedes-Benz B-Class MPV in its side profile, however.

Not every dimension has grown: it's actually 15mm shorter than the old version, although its wheelbase is 30mm longer. This means it's now a proper family car; rear accomodation was a weak point in the old GLA, but this 6ft 3in-tall tester is able to sit comfortably behind a similarly sized driver with head and leg space to spare.

The 435-litre boot is at the meaner end of the small SUV scale, although the rear outer seats slide fore and aft independently of each other and, of course, if the boot were any bigger, it would encroach on the GLB’s turf.

While externally there is distance between the two, the GLA's link to the A-Class is abundantly clear inside, where it shares the same appealingly designed and materially upmarket cockpit and versatile MBUX infotainment system that can be operated by touchscreen, touchpad or natural speech commands. 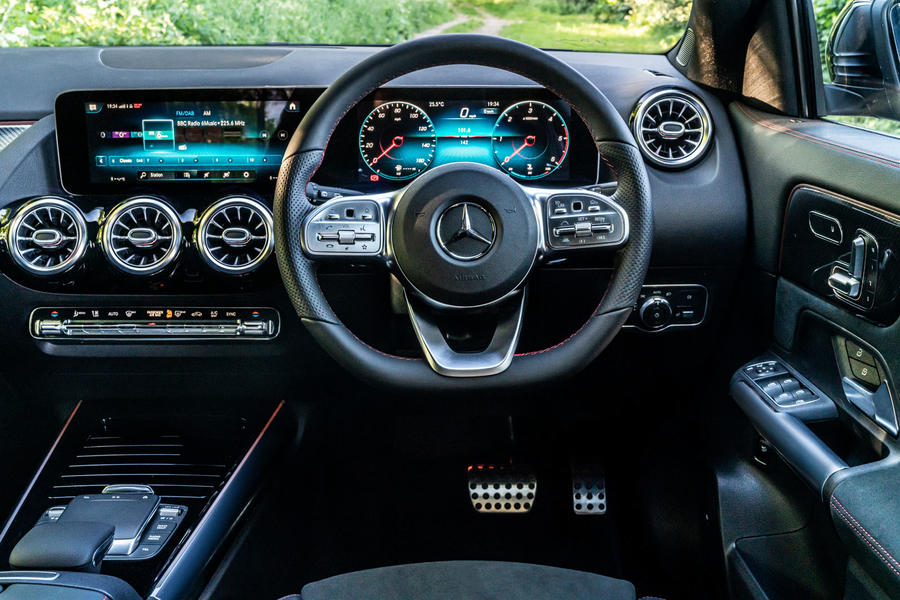 Higher-end specs are the name of the game to get the desired premium feel and especially to shun the cheap-looking dual-screen infotainment-and-instrument set-up for the glossy 10.2in displays that appear to link as one.

But as with the A-Class, there’s a feeling that the cabin just misses that last little bit of substance to really set it off: the multi-control infotainment still isn’t as intuitive on the move as BMW’s iDrive rotary scroller, while a few scratchy plastics, hollow-feeling door cards and, on this example, the odd little creak and rattle just take the shine off what for what in this spec is a £40,000-plus car.

There are two fundamental differences between the GLA and the A-Class, thanks to that taller roofline. Firstly, it allows an expanded glasshouse for better all-round visibility and a more spacious feel, particularly up front.

Secondly, it enables a notably raised hip point. This was a criticism levelled at the old GLA that Mercedes has rectified. The front seats are mounted significantly higher up and with plenty of adjustment, so you can lord it over hatchbacks or keep a reasonably car-like position. The other benefit? There’s now loads of room for rear passengers to slide their feet under the front chairs.

Unlike the old GLA, which managed to deliver neither incisive handling nor stand-out ride composure, the new model is a consummate all-rounder on the road: vice-free, predictable and relaxing.

Ride comfort is significantly better, for starters. Ordinarily, 19in wheels combined with AMG Line trim’s 15mm ‘lowered comfort’ suspension wouldn’t be a favourable recipe, but thanks in part to quite generous, 50-profile tyre sidewalls, the GLA is composed and unruffled over everything but the worst craters at lower speeds.

Spring rates seem softer than on the A-Class, but despite its taller body, the GLA doesn’t make a hash of corners. The roll rate is kept in check reasonably well (at least with this set-up), meaning you're more likely to see the front tyres surrender grip than be put off by the amount of body lean.

Our 220d diesel test car comes with 4Matic four-wheel drive only, but in typical, dry-road driving, you would be hard-pressed to detect any appreciable drive sent to the rear axle. The GLA steers as quickly and accurately as the A-Class, too, but there’s little engagement to be found here, as is the case with the majority of its rivals.

This flagship diesel delivers strong, linear punch with greatly improved noise, vibration and harshness over the equivalent engine in the old GLA. You’re rarely left wanting for pace, to the point that non-enthusiast drivers should strongly consider pocketing some cash and plumping for the likely perfectly adequate 200d. Still, this unit feels well matched to the only occasionally slow-witted eight-speed automatic that is the only gearbox choice.

If you’re upgrading from the old GLA, don’t hesitate for a moment. In every area that matters, this is a superior vehicle, offering more space, comfort, refinement, technology and quality. But, inevitably, the cost has risen to reflect this.

Tough competition, undoubtedly, and the British and Swedish challengers arguably offer more of the desirability and ‘special’ feel looked for at this price point. But in other, more objective areas, the GLA is wholly competitive and well worthy of consideration. 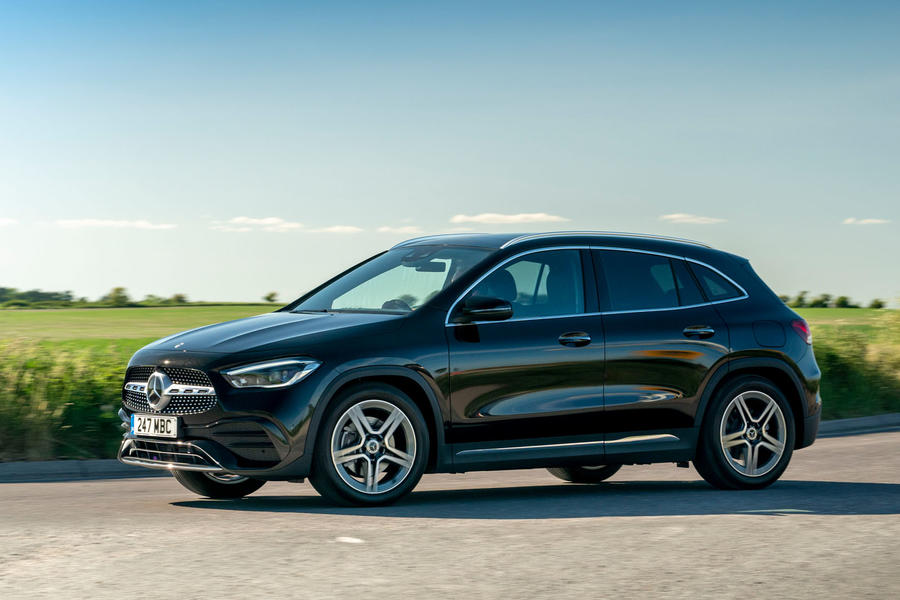 Not as lithe looking as the

Not as lithe looking as the original due to an apparent cab forward bonnet shortening. The X2 arguably looks better styling wise.
Just Saying 18 June 2020

Let's design a dashboard that's focus is all about the air vents!
I recall Mercedes announcing a while back that their brand must include younger drivers.
Must try harder!
14:02
View all comments (7)