From £66,9057
Should you buy this 503bhp twin-turbo V8 brute over the likes of the Jaguar F-Pace SVR and Alfa Romeo Stelvio QV?
Close

Is AMG's rapid GLC 63 SUV the answer to your prayers, or to a question nobody’s asking?

This is the facelifted version of the fastest SUV Mercedes makes. Like all models in the GLC range, the superheated AMG 63 and 63 S have been treated to a mid-life nip and tuck, which extends to some cosmetic tweaks, upgraded infotainment and some mind-boggling driver mode additions.

Externally, the changes are subtle, with both the regular GLC and the GLC Coupé - which we're testing here - getting sleeker LED headlights, an even more prominent grille, revised tail-lights and a natty pair of trapezoidal talpipe surrounds. There are also some fresh alloy wheel designs, including an optional 21in set.

Inside, the influence of the latest A-Class is brought to bear, with the introduction of the latest MBUX infotainment and digital dial pack. There’s also Mercedes' latest steering wheel design, complete with its bewildering array of buttons and switches. Still, it looks good and feels nice in your hands.

Mechanically, the changes are small. The multi-chamber air springs and adaptive dampers are now standard on the 63 and 63 S, as is an electronically controlled limited-slip differential. Channelling power is the AMG Speedshift MCT 9G nine-speed automatic gearbox and the 4Matic+ all-wheel drive system that can send torque wherever it’s needed.

The difference now is that the transmission is linked to AMG Dynamics software that not only offers the normal Comfort, Sport, Sport+ and (on the S) Race driving modes but also a new Slippery setting for, well, slippery conditions, such as snow. Within these modes are separate Basic (Comfort and Slippery), Advanced (Sport), Pro (Sport+) and Master (Race) programmes that run in the background, effectively trimming back the interaction of the stability control and delivering a more aggressive torque split as you click through each driving mode. Confused? You should be.

Happily, the engine has been left well alone, which means you get the same 4.0-litre V8 as before. Effectively hand-built, the twin-turbocharged 'hot-vee' is a corker and in the 63 S develops a not inconsiderable 503bhp and a thumping 553lb ft at just 1750rpm. The 63 S also benefits from adaptive engine mounts that stiffen in the sportier driving modes for greater steering precision – or so Mercedes says.

And if the numbers don’t shout loudly enough for you, there’s an optional performance exhaust that’s borderline antisocial - although a near-two-tonne SUV with north of 500bhp isn’t necessarily going to win you many friends, even with the marginally less verbose standard exhaust. 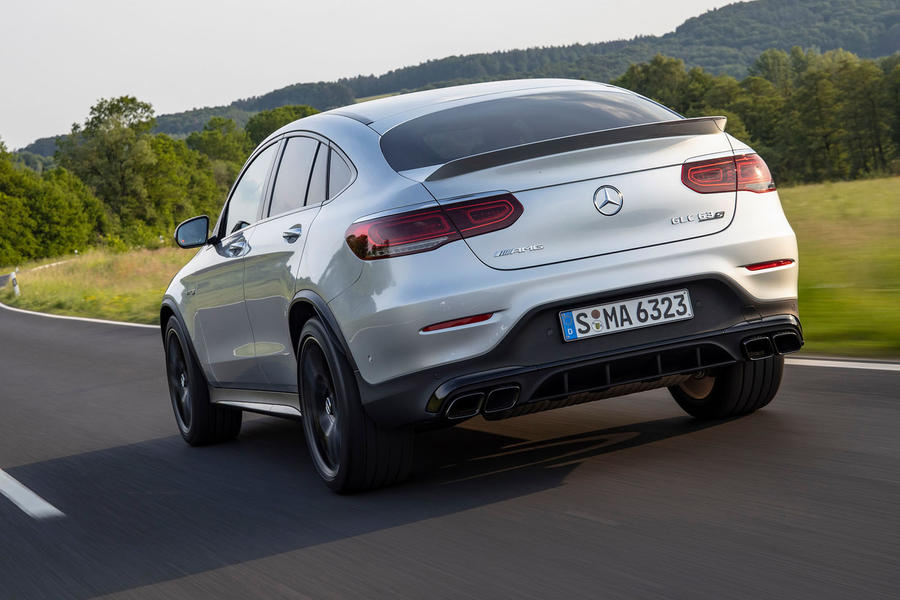 Given its portly kerbweight of 1945kg, the biggest surprise with the GLC 63 S Coupé is just how quick and composed it can be. Factor in the raised driving position for a better view of the road ahead and our test car’s optional carbon ceramic brakes and the rate at which you can reel in twisting sections of road is astonishing.

Sport and Sport+ modes are best for quick road work, the tautening of the dampers and springs helping to offset the car’s highish centre of gravity and not inconsiderable mass. They also add some welcome heft to the otherwise mute steering, liven the throttle a little and put the gearbox on high alert - although you’ll probably still want to pop the shifts yourself using the paddles.

There's surprising turn-in bite, even in the patchily wet conditions we experienced, allowing you to carry more speed towards the apex than you’d think, while at the exit that trick all-wheel drive gives the impression that the rear axle is getting in on the action to rotate the car as you feed in the power. That said, be over-ambitious and understeer is the order of the day, with the front always giving up before the rear.

At this point, the stability control cuts in rather raggedly, even in its more relaxed modes and despite the wholesale retuning of the system - a reminder of the considerable forces at work here. Of course, you could switch it all off, but the thought of gathering up two tonnes of metal on the road brings on sweaty palms. This isn’t a car you throw around with abandon but rather a point and squirt device - devastatingly effective across the ground but not tactile and rewarding in the traditional sense.

Still, there are smiles to be had, and that’s largely down to the engine. This twin-turbo V8 really is a force of nature, with Mercedes claiming a totally believable and extremely rapid 3.8sec for the 0-62mph sprint. Yet it’s the instant, relentless muscle that hooks you, the car firing you out of each corner on an effortless wave of elastic torque. There’s so much twist from so little revs that you’d swear there's a massive electric motor hidden under the hood.

Apart from the noise, that is. Naturally, our car was fitted with the optional performance exhaust, which allows you to open bypass valves at the touch of a button for the full bellowing, crackling, popping and banging mechanical orchestra. It’s not a subtle way to travel, and it’s neither big nor clever, but you can’t help giggling every time the V8 clears its throat and shouts its way around to the redline.

It's therefore a bit of a shame the nine-speed auto isn’t as good. It’s smooth and swift enough when left to its own devices in Comfort mode, but it can get a bit hyperactive in Sport and Sport+, with even gentle throttle applications triggering a few unnecessary and jerky downshifts. Using the paddles helps, but even then the gearbox can get wrongfooted, with part-throttle upshifts often being sent home with a jarring thud. It can also be truculent if you leave it a little too late to upshift, causing the engine to headbutt the rev-limiter and delaying the next gearchange, which can be very frustrating.

Wind everything back to Comfort and on our admittedly well-surfaced German test route, the 63 S is on the whole impressive, its air springs dealing with long bumps and undulations with a welcome waftiness. Only sharp ridges and deeper potholes get it ruffled as it struggles to contain the quick movements of those hefty 20in wheels, while an underlying firmness suggests the car might not be so comfortable on poorly surfaced UK roads. At least, like all other GLCs, it benefits from decent suppression of wind noise, even at the naughtier end of the autobahn speed spectrum.

Another highlight is the overhauled interior. The new MBUX infotainment system has been well integrated, as has the 12.3in instrument cluster, with both helping to lift the interior to create an even classier ambience. And while the ‘Hey Mercedes’ voice control seems a bit gimmicky, it works surprisingly well, as do the augmented reality sat-nav directions that are overlaid onto the front camera view as you approach a junction. Very neat. 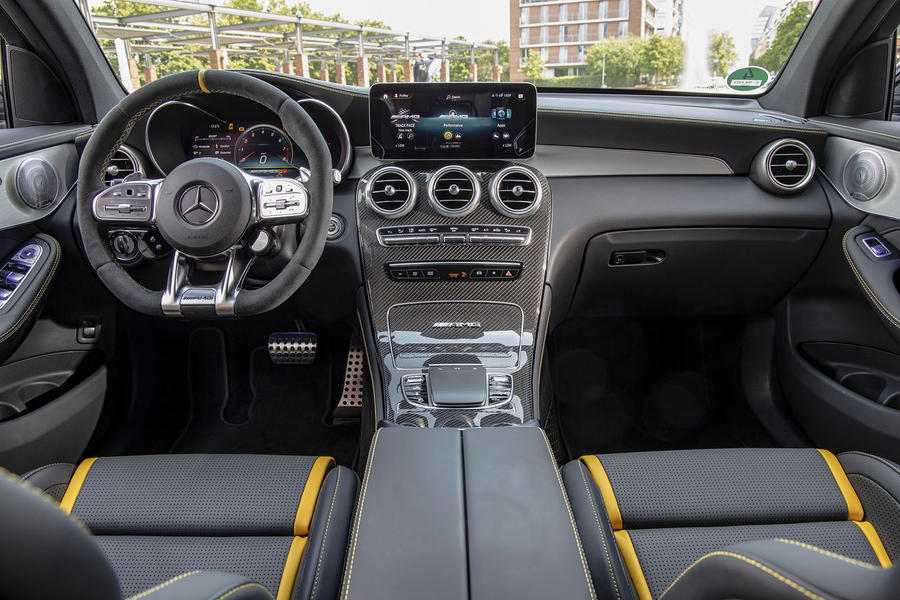 Pricing for the AMG models hasn’t yet been released, but if you reckon on about £70,000 for the standard GLC 63 through to £80,00 for the GLC 63 S Coupé, you’ll be there or thereabouts. As ever, the smaller and less practical Coupé versions are pricier to the tune of about £6000, so you’ve got to really like the looks.

What’s more, this isn’t exactly and empty market sector, with the new BMW X3 M and X4 M due to come on stream and the facelifted Porsche Macan Turbo and Jaguar F-Pace SVR just around the corner. Oh, and there’s also the hilariously good Alfa Romeo Stevio Quadrifoglio. Against this competition, the 63 S is good but not great. It arguably has the best engine of the lot (this 4.0-litre V8 really is one of greats) and is surprisingly capable when peddled with alacrity, but it lacks the edge and entertainment that make the Alfa, Jaguar and Porsche the paragons of the this sector. 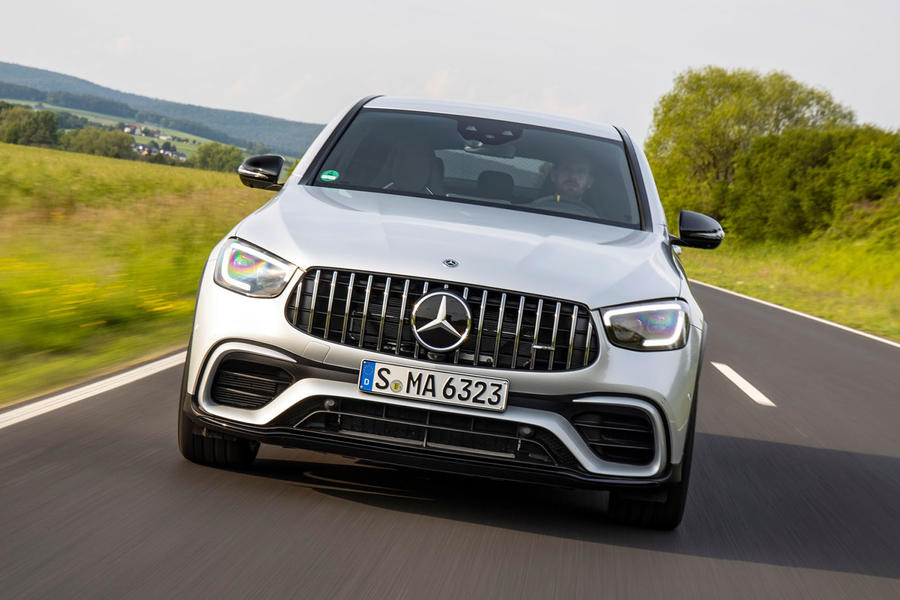 Really is your choice, personally, I’m not a fan of the rear end, it would look better in my opinion without the spoiler, even a pop up spoiler would be better.....

Really is your choice, personally, I’m not a fan of the rear end, it would look better in my opinion without the spoiler, even a pop up spoiler would be better.....

Agreed, a pop up spoiler would have been so much better, it looks like an after thought, like the one they put on the back of the mk1 Audi TT (which was an after thought).

The spoiler is the least of

The spoiler is the least of it's problems, Mercedes should be ashamed to have their name on this beast, wow it's ugly!

Best looking thing about this car are the seat

Its to blooby and has been

Its to blooby and has been said that rear end is a bit strange, that spoiler looks like a Halfords on sale offer . The interior a bit as most Mercs these days a bit garish and glitzy for an upmarket brand like Mercedes. They are always when judged not quite there , great  engine   in a 2nd division car.. Oh knowing to friends with Mercedes v v expensive to maintain with both having many many small irritating problems, Build to higher standards that the answer Mercedes

Its to blooby and has been

Its to blooby and has been said that rear end is a bit strange, that spoiler looks like a Halfords on sale offer . The interior a bit as most Mercs these days a bit garish and glitzy for an upmarket brand like Mercedes. They are always when judged not quite there , great  engine   in a 2nd division car.. Oh knowing to friends with Mercedes v v expensive to maintain with both having many many small irritating problems, Build to higher standards that the answer Mercedes

Should you buy this over a

Should you buy this over a Stelvio QV etc?  No, because like the buyer of any GLC 'coupe' you will look like a dick.

Should you buy a regular GLC AMG over a Stelvio QV, yeah maybe as they both look great, drive great etc.

What a hideous looking car,

What a hideous looking car, the designer should be fired post haste. Mercedes were good looking cars, what happened with this beast?

Simple power to weight artihmetics should tell Autocar tester whether the vehicle is likely to be quick - before the said person has even entered the car and sat at the wheel. Now, however is a 2 ton car - fun? That's a very different equation. It shall have inevitable intertia hence can't really be agile, even however with grippy tires it can be effective at covering ground rapidly.

Wow! It is really so useful and so knowledgeable post. Thanks for share. Keep Posting, Good Job Ahmedabad Escorts |  Escort service in Ahmedabad