From £143,3057
Firebrand AMG flavour is, for now, the only one in which the G-Class comes in the UK. It's as absurd as ever, but now much better-mannered and more luxurious with it
Open gallery
Close

In a market in which there seems to be another six-figure ‘super-SUV’ coming along every other week, with everyone from Aston Martin to Rolls-Royce gearing up to launch one, what future is there for the pumped-up, AMG-engined Mercedes Gelandewagen? Will anyone be willing to part with upwards of £140,000 for this boxy throwback, you might wonder. If you’re looking for luxury, capability, convenience and conferred status from an exotic SUV, you could have a Bentley Bentayga for the same money, a Range Rover Sport SVR for a lot less or a Lamborghini Urus for not much more.

Well, you might wonder. For a while, at least — until the new G63 rolls into the car park in which you’ve been waiting, side-exit exhausts burbling hilariously and brooding with enough visual charisma and Tonka toy menace that it could have been driven straight out of a three-year-old’s sandpit and then zapped by a reverse-miniaturiser raygun.

There are SUVs, and then there are SUVs like this one. SUVs with a roof you can’t see over, even if you’re 6ft 3in, and that you have to climb up in order to board, whether you’re extremely unused to doing so or not. SUVs with square corners, exposed hinges and the chunkiest of door handles. Proper SUVs.

The G63 has doors that close with a ‘whump’ so solid-sounding that it can only have been engineered at considerable expense. Its door lock mechanisms are so loud that you could hear them ‘clack’ from a quarter-mile away. It retains a ladder frame chassis, a rigid rear axle and enough ground clearance to trump a Toyota Land Cruiser, even after the biggest model generation revision in the G-Wagen’s 40-year history. It’s a proper SUV and then some — apparently having been engineered to outlast the zombie apocalypse.

It’d need to be an apocalypse in which the petrol pumps had been left on, mind you. At least as far as UK buyers are concerned, there is only one engine on offer in this new G-Class and it’s AMG’s twin-turbocharged 4.0-litre V8, giving this G63 some 577bhp and a whacking 627lb ft of torque. 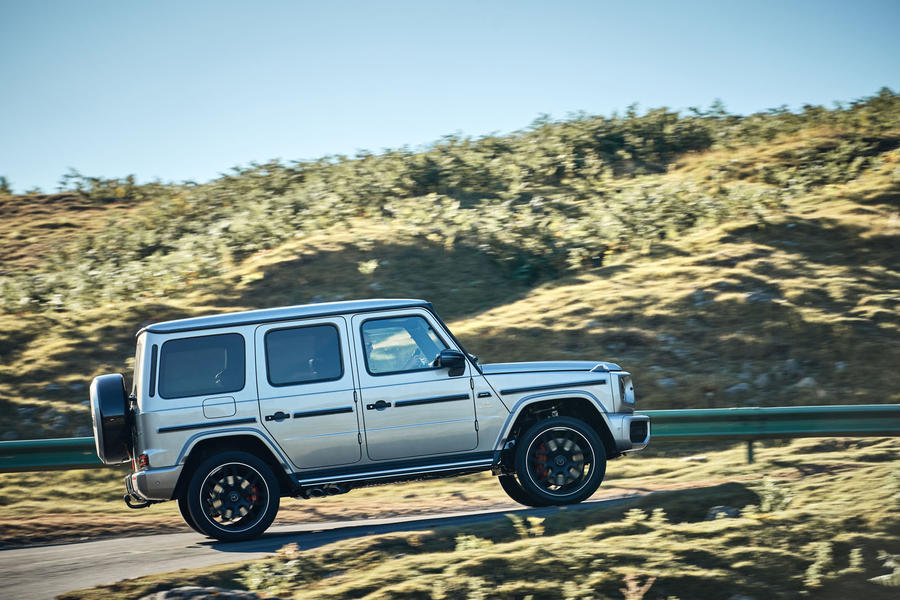 This is a bigger car in every dimension than the last G-Class, and it has a new mixed-metal body that's both lighter and stiffer than before, under which there is a separate ladder frame chassis. But the old G-Class’s rigid front axle has been replaced by a double wishbone front suspension system, and its recirculating ball hydraulic power steering swapped for an electromechanical rack-and-pinion set-up.

The car has standard steel coil suspension, but that hasn’t prevented ground clearance rising to 241mm and wading depth increasing to 700mm. Meanwhile, the car now offers a nine-speed torque converter transmission with low-range reduction gearing for extreme off-roading, as well as three lockable driveline differentials. It may be lightened, then; but it’s about as far from being a lightweight as it’s possible for a luxury SUV to be.

The G63’s exterior design being such an homage to the G-Class’s time-honoured look, you don’t expect to find the cabin so transformed after you’ve clambered up and then in. Indeed, it’s this interior — with its twin widescreen instrumentation and infotainment screens, its turbine-like air vents and its upmarket mix of materials — that so emphatically answers any lingering doubt that this isn’t yet another facelift of the last-generation G-Class (and there were plenty of 'em).

It simply couldn’t be. This one is notably more spacious, more luxurious, more advanced and more expensive-feeling than its forebear was. So much so that you’d say that the car now feels as modern and upmarket on the inside as it looks eye-catchingly retro on the outside. That can’t be a bad combination for people who want a car that looks like a design classic but isn’t like one to live with.

Or to drive, we might add. The last G-Class was the sort of car to attract you with its outlandish visual character, but then give you reason to repent soon enough with its shuffling, uncouth low-speed ride, its heavy low-geared steering and its unwieldy handling. In this tester’s experience, you wanted to enjoy driving the old ‘G’ quite a lot more than you actually could.

With this new one, Mercedes has addressed the car’s chief dynamic vices very effectively indeed. I’ll admit that I’m not quite comparing like-for-like models, since the last G-Class I drove was a mid-range diesel that hadn’t been in receipt of the attentions of AMG. But Mercedes’ key decision this time around may well have been to involve AMG in the specification and dynamic development of even the non-AMG-badged models in the G-Class range, and thus driving up the car’s dynamic standards as far as possible in one generational leap.

And what a difference that’s made. The G63 steers with manageable weight, good directional responsiveness and a sense of precision that its predecessor simply wouldn’t have approached. It rides and handles at speed with a much more settled sense of composure than any G-Class before it, too — allowing for the fact that your expectations here still ought to be quite a long way from that of, say, an Audi SQ7 or a Porsche Cayenne Turbo.

A Cayenne Turbo does not have a separate chassis, a rigid rear axle or long-travel steel coil springs — and neither is it a car with a roofline that’s within a handspan of two metres. Considering that the G63 has all of the above, the way it turns in, checks body roll and changes direction when cornering are all very creditable. Moreover, I’d say the car’s ride and handling now bear comparison with the standards of less rugged performance SUVs without ever threatening to exceed any of them. Frankly, it doesn’t need to exceed them, because it remains a proper off-roader at heart.

The G63’s V8 engine, however, would be capable of pouring on pace at a rate to stretch even the very best road-going chassis in the fast SUV class. It doesn’t take long at all to propel the G-Class to speeds that it’s not entirely comfortable with on testing British roads — mostly because the car’s adaptive dampers only let you choose between softer dynamic driving modes that permit a bit too much head toss and vertical body movement and stiffer ones that deliver better outright damping but also begin to make the car’s ride feel clunky and wooden.

Choose your rate of progress judiciously, though, and the G63 offers plenty of driver reward. It’s stable enough, sufficiently composed and can be placed accurately enough to maintain an engaging and brisk cross-country stride — and just about enough to earn its corn as a bona fide driver’s car. Meanwhile, flicking your way up and down the ratios of that nine-speed gearbox allows you to enjoy that V8 at both low revs and high revs, and to bask in the drama and absurdity of a car that always has much more power to dispose of than it could ever need. 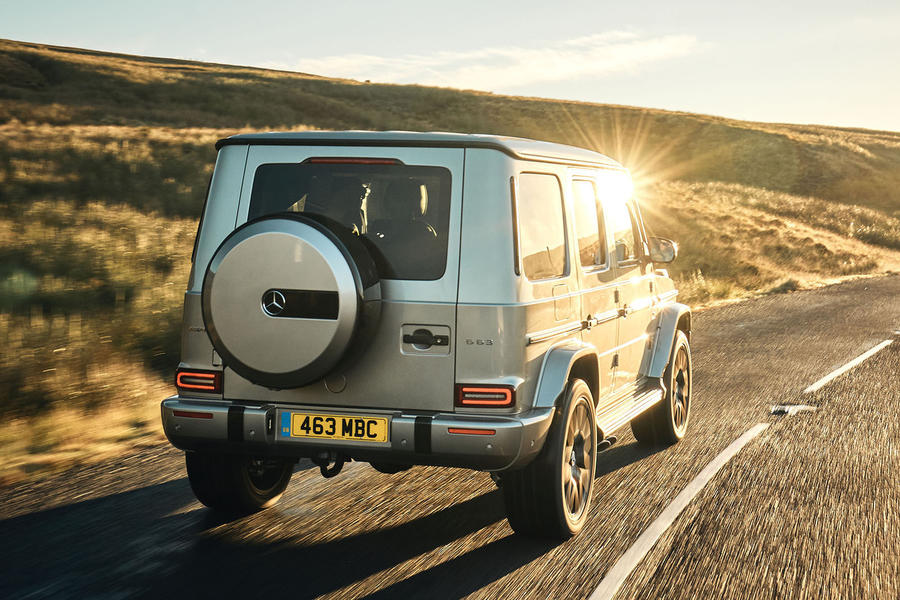 Perhaps not as the ultimate on-road performance SUV. But will that matter to most G63 owners and G-Class devotees, who'll love the fact that this car is so much better-mannered and easier to drive around town than its forebears? Not for a second, I dare say — and nor should it.

The G-Class now does a very respectable impression of a modern luxury SUV in most of the ways that matter, while still looking like anything but. And as a vehicle for burning through the world's remaining stock of unleaded petrol while simultaneously massacring as many marauding zombies as possible, I can think of nothing better. 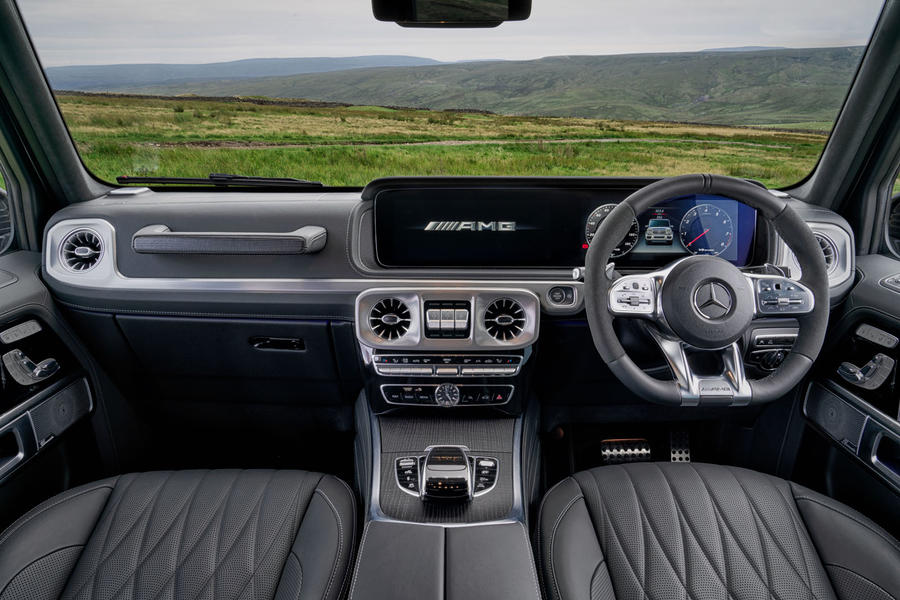 Not really my type of vehicle however it was very well designed and designed as a "working vehicle" not some ridiculous "SUV" as the man said "I admire it's purity".

... but i love the non-AMG versions. A G500 is pretty much perfect, and when they stick their new inline 6s into it those will be even closer to perfection.

This will do while my Singer 911is being built...

If I did the Euromillions, a Singer 911 would be my first purchase. While it’s being built, a new G Wagon (Class!?!) would suffice. None of that bling though, I’d want them to build me one in a ‘70s colour and fit wheels off a Sprinter. I don’t look much like a footballer (or his Mrs) so a custom old school build for me please.

It’s nice to dream but the reality is I’ve recently signed up for pre interest in a new Jimny.