It’s not complicated: this is the new, three-box version of the Mercedes-AMG A35 hot hatch.

Yet compared to its hatchback counterpart, the A35 Saloon is a more exciting product. For a long time (before the pumped-up utility vehicles, hatchbacks and, of course, clean-sheet supercars), AMG was high-performance saloons. It’s why back-catalogue legends such as the W124 300E ‘Hammer’ today go for six figures at auction. And actually, the very best models developed in Affalterbach today are still all saloons with V8 engines.

Starting at £36,565, the A35 is a much less expensive route into AMG saloon ownership than any Hammer was or ever will be; it's considerably more affordable than the modern-day C63. Admittedly, the A35 doesn't get a big V8 or even a bespoke AMG engine, but if you want a compact saloon that ticks at least one of those boxes, there’s the new £52,000 CLA 45 S. The 415bhp 'M139' motor it uses has the highest specific output of any four-cylinder production engine ever made.

Instead, the powertrain in the A35 Saloon is carried over wholesale from the A35 hatchback. That means you get 302bhp from a fettled version of the mass-production 'M260' 2.0-litre turbo engine found in the A250 – not exotic but very much on the money here. Power and torque are put through Mercedes’ own seven-speed dual-clutch automatic gearbox to all four wheels, with an open differential at the front and an electronically multidisc clutch housed within the rear transaxle.

Naturally, the saloon is longer than the hatchback, although only by 130mm. It follows that weight is also up, but at 1570kg, the difference is just 15kg. In fact, the most significant difference beyond the sleeker design is that, at 420 litres, boot space is usefully increased. 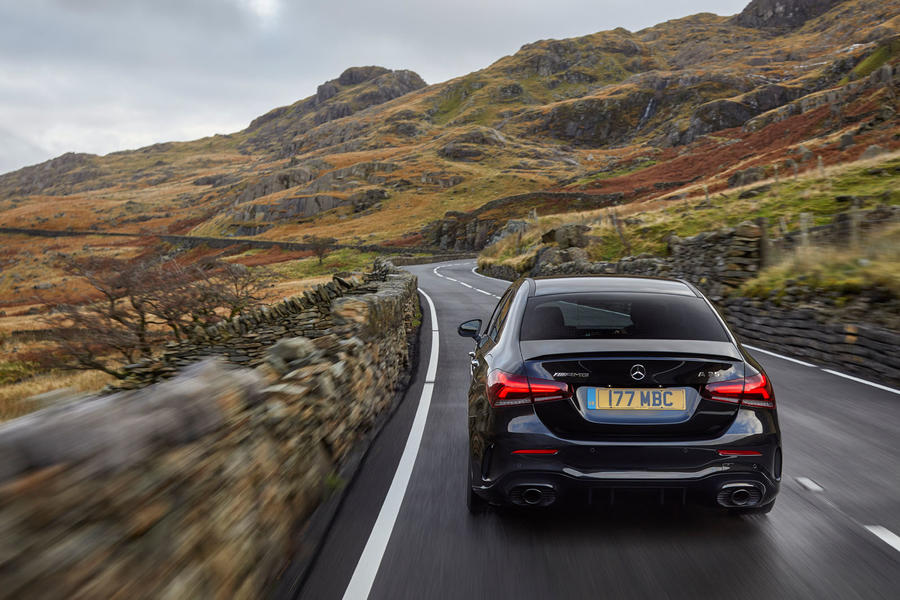 The A35 Saloon is amusing – mainly because, unlike the hatchback, it has no wing to give the game up. Except for the beefy rear diffuser, which is blended into obscurity on our blacked-out test car anyway, it could even be considered vanilla in the looks department. More AMG Line, less AMG proper.

Yet it's diabolically quick, with keen throttle response for a blown engine of modest displacement. As with everything these days, you need to select the most aggressive map to get the best from it, but do so and this 2.0-litre engine of humble origin feels hair-trigger sharp, the red needle thereafter bulldozing its way up the digital tachometer with plenty of piped-in exhaust. The effect of three inches' accelerator travel, delivered at 3500rpm in second or third gear, can be quite shocking if you're more familiar with, say, the comparatively genteel Volkswagen Golf R.

The gearbox still frustrates, however. It's often grabby at low speeds but flustered by full-bore upshifts close to the redline, despite the hardware's ability to operate quickly and smoothly elsewhere in the rev range. If AMG really wants to offer drama and involvement in a relatively attainable package, it could also make the small things count; pulling the shift paddles, for example, is only a so-so experience, and there's too much stylised switchgear on the steering wheel for the A35 to feel like a serious drivers' car. In short, it's a bit affected – very un-Hammer.

However, it's dynamically Mercedes-AMG the same fare as the A35 hatchback, which is a car we respect. Through the firm steering rim, you get plenty of confidence from the front axle, which is arguably this AMG’s greatest strength and makes for very fast going even when it's horribly wet underwheel. This chassis itself then grips and grips, and when the grip does finally run out, it's a benign thing that gently understeers. That's also very un-Hammer.

But with only half of the available torque ever put through the rear axle, the A35 Saloon is never going to challenge something like the BMW M2 Competition for handling panache, and it generally goes down the road like a very well set-up front-driven hot hatch with excellent traction. It's quick but a bit one-dimensional to pull off the AMG badge with conviction.

The other element worth mentioning is the passive suspenion. It does a fine job of controlling body movements at speed, but you'll fine compliance sorely lacking if your intention is to use the car every day. You could also argue that, conceptually, the saloon needs a degree more suppleness than the hatchback, and that simply isn't the case. The optional AMG Ride Control adaptive dampers would improve matters in their softer Comfort mode, but the A35 Saloon is certainly at the firmer end of the spectrum in its class. 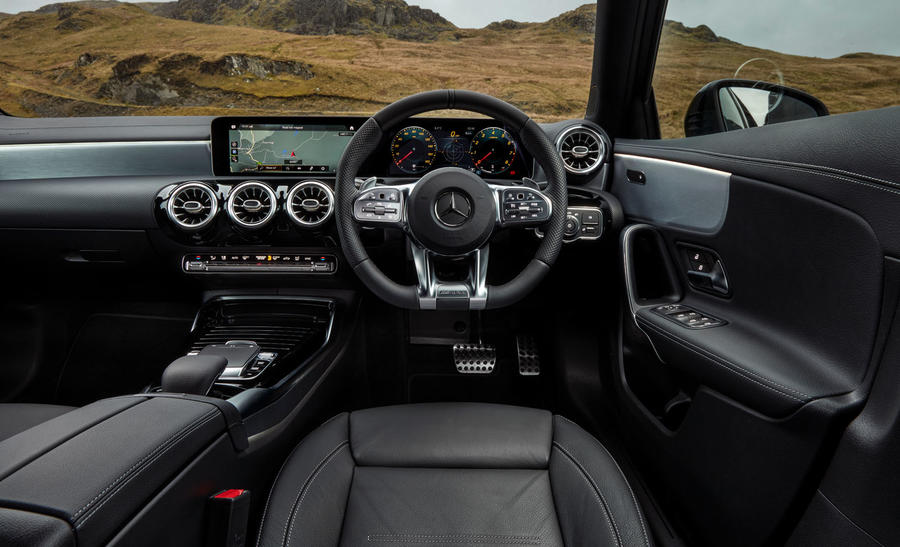 This is a cliché but, in this case, a cliché worth repeating: the A35 Saloon would really benefit from a good manual gearbox.

With its loud-mouthed engine and subtle looks, it has a likeable degree of Q-car character, but its handling isn't engaging enough for the driving experience to really get under your skin. And it doesn't offer the same rolling refinement as the soon-to-be-replaced Audi S3 Saloon, so it really does need to entertain.

Three pedals and a stick would make it genuinely involving as an all-weather performance car, rather than merely an impressive point-to-point machine. Junior AMG status also makes it feel ripe for a manual in a way that the senior saloons don't.

Nevertheless, if you're already on the hunt for an A35 hatchback or something of similar ilk, the A35 Saloon is worth considering. It's more practical, less common and just as phenomenally capable – and perhaps has just a smidge more AMG swagger, if still not quite as much as we'd hoped. 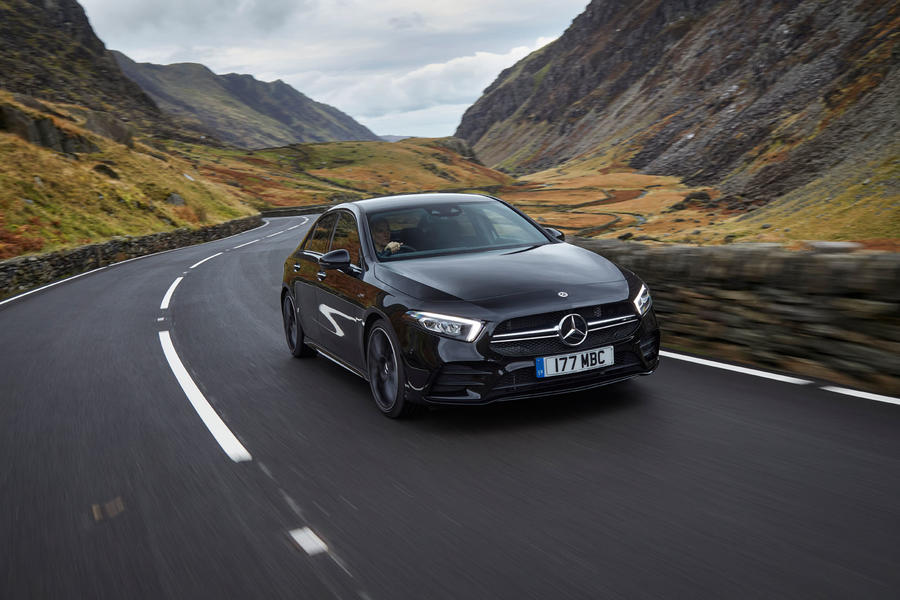 While the exterior is more or

While the exterior is more or less well done, it is the interior that is incongruous. Why, throughout the A & B ranges, give such strong emphasis on the baroque absurdly overstyled air vents? What's so special about air intake on this car that deserves such treatment?
Mercedes used to be about rational sober design / styling decisions, but this is nothing other than a vulgar gimmick.
abkq 6 December 2019

While the exterior is more or

While the exterior is more or less well done, it is the interior that is incongruous. Why, throughout the A & B ranges, give such strong emphasis on the baroque absurdly overstyled air vents? What's so special about air intake on this car that deserves such treatment?
Mercedes used to be about rational sober design / styling decisions, but this is nothing other than a vulgar gimmick.
voyager12 5 December 2019

neat, tidy-looking car. Blows its more expensive, but over-the-top 'look-at-me' sibling the CLA out of the water. And makes minced Bavarian meat from the BMW 2 Series GranCoupe. That last one must be the last word in ugliness on wheels.