From £18,31010
Our favourite sub-£30k sports car gets the engine it’s always deserved as part of its first run of updates
Open gallery
Close

The Mk4 Mazda MX-5 has only been with us for three years but already it’s cemented itself as a legend of the family.

We love it for its attainable thrills and back-to-basics character. And, apparently, so does almost everyone else, as is evident by the two-seater’s growing number of sales, which totalled a not-unimpressive 39,773 in Europe last year. But while it’s successfully serving as the plucky halo car for Mazda by appealing to the mainstream, for some keen drivers it has yet to really reach its full potential.

The reason relates to its powertrains. With just two engines available from launch, a 1.5-litre unit offering 129bhp or a 2.0-litre version with 158bhp, the car has never been able to garner the attention of those after something serious, something that offers performance in a sports car package to rival the mainstream hot hatches.

The car has looked underpowered next to mainstay models such as the 197bhp Ford Fiesta ST, and Mazda knows this. In fact, it’s always known this, because executives now admit that they put the car to market in 2015 with the intention of further developing the 2.0-litre unit for more power. Now, the time has nearly come for these planned enhancements to be introduced to the road as part of a wave of updates.

From 1 September, the MX-5 will come with a telescopic steering column offering 30mm of welcome reach adjustment and optional Apple CarPlay, enhancing the car’s appeal. The entry 1.5 model will also get a few small mechanical improvements to offer 1bhp more, at 130bhp — although that’s not exactly something to shout about.

The 2.0, on the other hand, grabs headlines with a longer list of upgrades to offer a much more substantial 23bhp, with peak output now a rather healthy 181bhp. The changes to realise this new performance include lighter pistons and conrods, a wider throttle body and enlarged port area, as well as a bigger-bore exhaust valve.

There’s also a lightened flywheel to enhance the motor’s responsiveness and it contributes to an increased hunger for revs, with that peak power output arriving at 7000rpm and the limiter now set at 7500rpm — a respective 1000rpm and 700rpm higher than before. 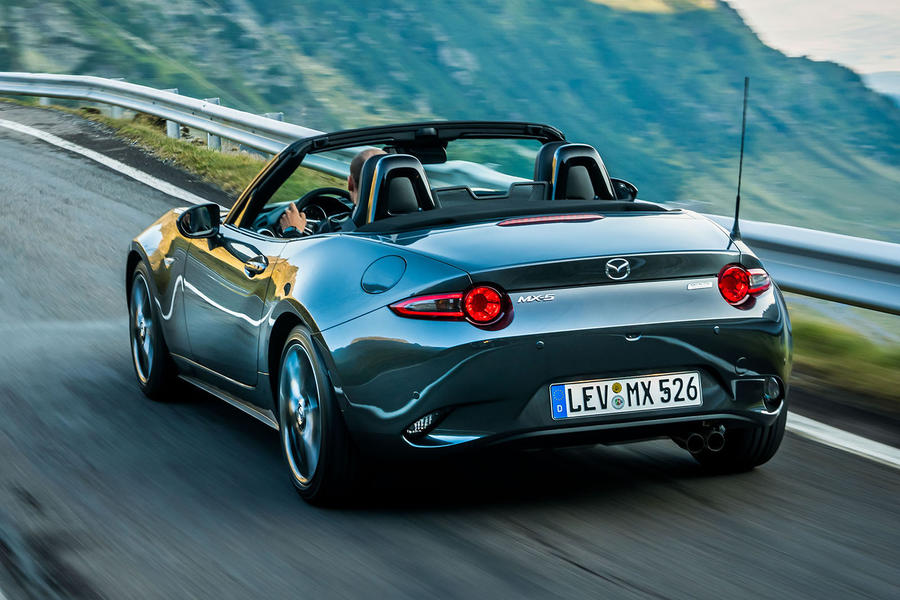 Where better to test the effects of said upgrades than the twisting, winding and highly technical string of Tarmac that slithers around the Carpathian Mountains of Romania, the Transfăgărășan Highway? This 50-mile route offers a mix of silky smooth surfaces and rough, cambered bends, with the latter providing a surprisingly accurate simulation of the good ol’ British B-road.

On such surfaces, the high-spec MX-5 we test, in a European specification that’s close to the UK’s Sport Nav+, deals with the challenging surfaces well — no surprise given that there are no chassis changes to the updated car. This top model uses Bilstein dampers and gets a standard-fit strut brace, helping to give the MX-5 its sharpest, most alert responses. It glides over the crests and dips of the Transfăgărășan, but the dampers ensure the body remains in check and leaves us wondering if anything firmer would be able to keep up with this unstoppable momentum.

Finally, this chassis has an engine to keep up because the 181bhp 2.0 feels considerably better matched to the package than its predecessor. The motor is zingy, offering a slightly better mid-range punch but significantly more enthusiastic top end — so much so that it feels unnatural to stay in the same gear for so long without bouncing into a rev limiter.

Once familiarised, you quickly realise the engine likes to remain spinning above 5500rpm to offer its best, so working the tight six-speed manual becomes an even more rewarding joy. But its improved elasticity allows us to cover great distances of technical sections in second gear, with the driver able to help the revs rise more quickly by encouraging the limited-slip differential (standard on 2.0 models) to send more torque to the inside wheel and enable manageable slides on corner exits. 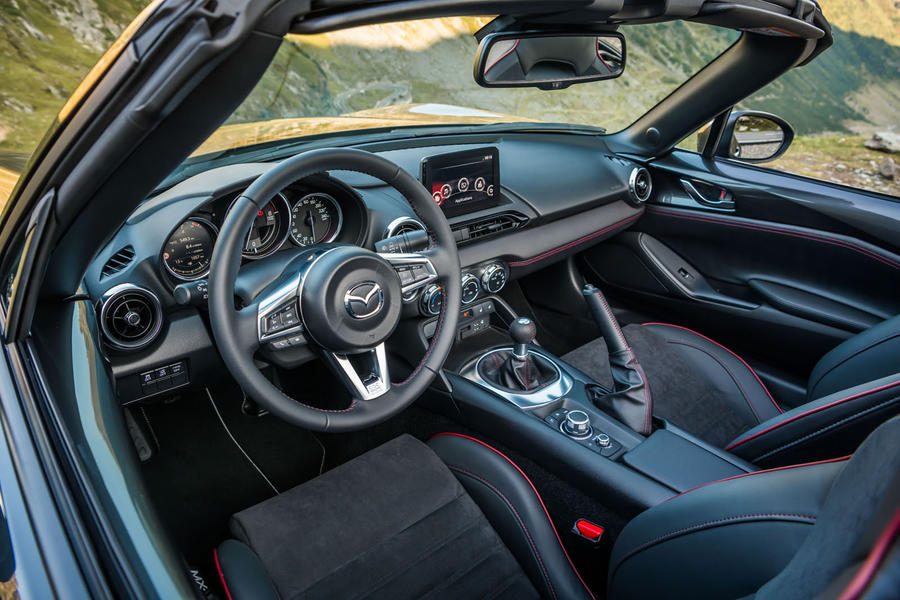 Ok, so there’s still not enough storage space, cabin room remains tight and motorway journeys will feature plenty of wind noise (even with the roof up). But the MX-5 is affordable, honest and, as a driver’s car, now a truly tempting package, thanks to its new 2.0 engine adding newfound vigour to its rear-wheel drive purity.

We loved it before and we love it even more now. So if you’re in the market for a sub-£30k roadster, the MX-5 2.0 really needs to be on your shopping list. Because this is where the fun’s at. 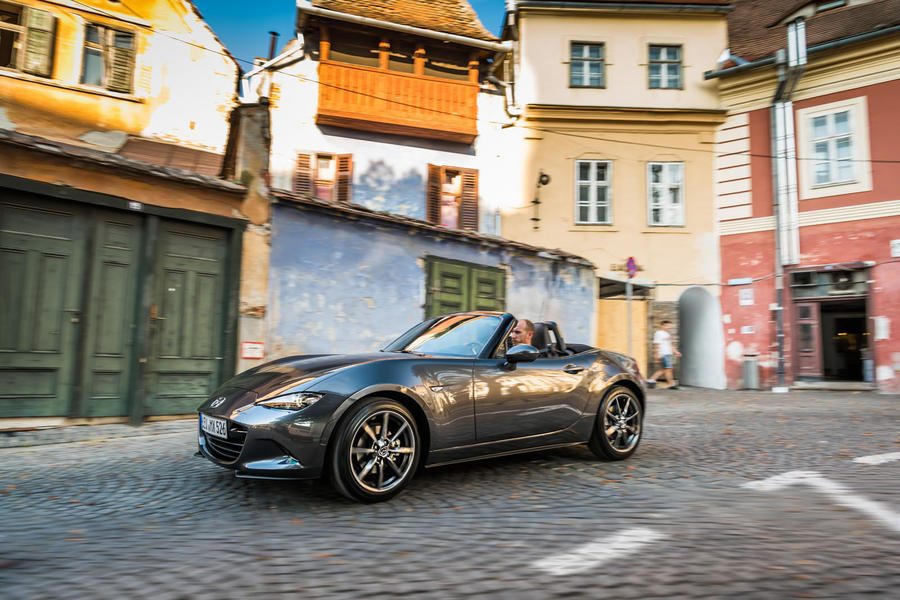 Just Got One My Fourth MX5

Unfortunately not for me

If I hadn't already had such a terrible experience with my brand new MK3 Mazda MX-5, I'd probably be joining the queue to buy one of these.

My 6 week old MX-5 broke down twice, had numerous other faults that were never fixed properly and the paintwork was ruined by the dealership whilst with them.

Mazda UK's responses were very disappointing and I ended up getting rid of the car for a huge loss as I was sick of it after never being able to enjoy it.

So no more Mazda products for me ever again, no matter how good they appear to be.

Knocking on some rough edges

I'd rather have the recently tested BBR conversion to the 1.5 engine.  That seemed well-suited to a small sports car, character-wise, with a bit of fire in its belly, which I'd happily accept in such a car at the cost of a little refinement.  Having never driven an MX5, but having once owned a larger Mazda which, while being fun to drive, was also very smooth, refined, comfortable and relaxing, I have always wondered whether too many such qualities may be found in the sports car, as I have never seen one being driven hard on any of the fast, open roads up here in the Highlands, whereas at some point over the years I've seen just about every other type of quick car going fairly rapidly.