Cars that engage their drivers rarely if ever achieve it with power alone, and that’s a song Mazda has always sung heartily with the MX-5.

Too heartily, perhaps. Until now, the most powerful factory car touted just 158bhp from a 2.0-litre four-cylinder engine and so companies such as BBR GTI, whose sympathetically fitted turbo kits provide power enough to properly exploit the perfect weight distribution and rear-driven handling, have thrived.

That hasn’t gone unnoticed in Hiroshima, and for 2018, Mazda has revised this larger Skyactiv engine. (The 1.5-litre remains largely unchanged.) Mechanical modifications – including lighter pistons and conrods along with revisions to the camshaft, injectors, throttle valve and air intake – have increased its output to 181bhp and yet emissions have fallen with the adoption of an engine stop/start system.

Mazda has made no changes to the chassis – not publicly, at any rate – and the MX-5 retains its double-wishbone front and multi-link rear suspension with a passive spring and damper set-up at each corner. All 2.0-litre cars use a mechanical limited-slip differential, while those in range-topping Sport Nav+ and GT Sport Nav+ specifications also benefit from Bilstein dampers and a strut brace.

We’ve already driven this latest MX-5 on the legendary Transfagarasan, where it fared superbly, but now we have the opportunity to try the more versatile hard-top RF on UK soil. 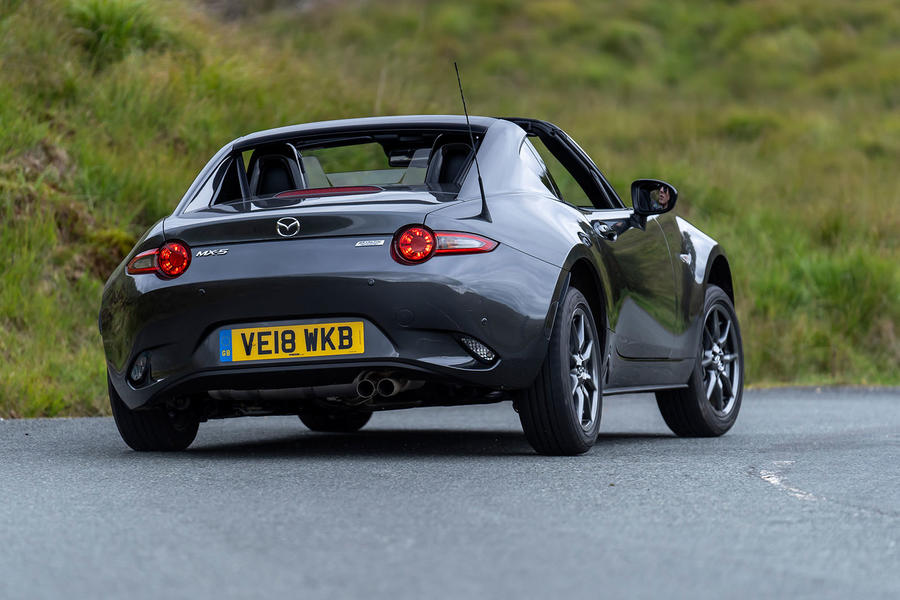 The rural roads of Northern Ireland’s County Fermanagh provide all the examination potential a road tester could ever want or need. These roads are something else: cruelly twisting and endlessly undulating but always with a strong sense of flow. They’re roller-coaster roads along which you quickly learn to expect the unexpected and make adjustments, often substantial, on the fly.

We’ll start with the new engine because it’s this that transforms the MX-5 from being likeable with caveats to a seriously desirable device for people who love driving. And this is not solely because of the additional power, which doesn’t so much electrify progress as dispel the slight lethargy of earlier Mk4 cars. And that’s all we ever really wanted. Even more power would be nice, but the important thing is that never do you feel now as though you need it, or that you’re somehow missing out by not having it.

The lovely thing is that 181bhp in a sub-1150kg chassis also isn’t so much that you can’t stretch this engine right out, time and time again, to its new 7500rpm ceiling – some 700rpm higher than before. In second and third gears in particular, the final thousand of those crisply responsive revolutions seem to relay an extra energy on top of a base that’s already lean-sounding and wonderfully cammy in the manner of many older performance engines.

There are (relatively) practical benefits, too. Because peak torque arrives 600rpm earlier at 4000rpm, fourth gear is no longer useless if you don’t happen to find yourself on a racetrack and still want to arrive on time. The engine also now has reach enough for second gear to be snagged for corners taken at speeds closer to the national speed limit, which allows you to indulge in this engine where it’s at its best, more of the time.

You’ll snag second neatly, too, and not simply because this six-speed ’box is a tactile delight. A more generously ported exhaust manifold along with a lightweight flywheel and the same beautifully positioned pedals also make it even easier and more gratifying to roll your right ankle and precisely blip the throttle during downshifts. In fact, were the clutch action a touch heavier, the MX-5’s control weighs would be approaching Porsche levels of excellence, because the brakes are still quick to bite but only modestly servo-assisted and instinctive to modulate.

We should also mention that Mazda has finally relented and given us telescopic reach for the steering column. Taller drivers will have to temper their enthusiasm at this news because we’re only talking 30mm of travel, but it has helped to address a significant weakness in the MX-5 package and removed an element of the toy-car vibe.

There’s very little that’s juvenile about the way this MX-5 takes to a challenging B-road, though. All 2.0-litre models get a mechanical limited-slip differential, but if you want to avoid a slight propensity for the rear axle to bob and hop over awkward surfaces, go for the Bilstein dampers that come on Sport Nav+ models, too. A strut brace is also included, although honestly you’d never tell difference unless you drove the cars back to back.

Those dampers and incremental changes to the suspension set-up in the three years since the car was launched mean it not longer so awkwardly collapses over its outside edges through corners. Fellow Autocar scribe Dan Prosser was told at the time that this trait was engineered in. Why? To simulate involvement for those lacking confidence to properly exercise this chassis. It was an odd approach for a self-professed driver’s car, and although there’s still significant roll through slower corners – more so in the slightly softer RF – the car now feels well supported.

The key here is that Mazda has allowed the powertrain to gain parity with the chassis without feeling the need to up the ante in terms of grip and stiffness. The RF therefore still possesses adequate grip to make quick, safe progress but no more. The benefits of that are ever-present, whether it’s a quarter turn of opposite lock under power or the subtle satisfaction of sensing both axles move as one through a tighter second-gear corner. In terms of meaningful fun (that is, beyond explosive exhaust sounds and acceleration so brutal you could choke on it), there isn’t a supercar to match it in real-world driving conditions.

No car is beyond criticism, though. The RF’s centre of gravity feels a touch higher than it should and there’s some lateral play in the rear suspension that can make it difficult to tell what’s going on at the contact patch. The RF’s slighter softer springing also gives it a propensity to rebound with too much enthusiasm from moderate loadings. A more committed driving styles solves this problem. Lastly, a couple of cars we’ve tried also seemed to have a lightly weighted clutch action: make sure the one you buy doesn’t. 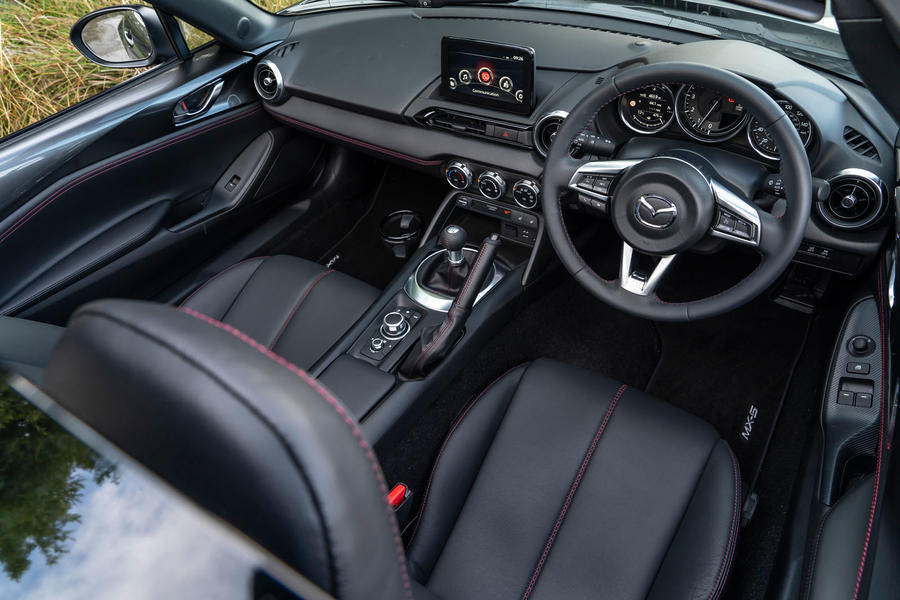 While this tester has always admired the MX-5 – its spirit, pricing and execution – this is the first one to elicit any profound pangs of desire.

For the money, no other powertrain is this evocative (a GT86 doesn’t even come close) and Mazda gets all the other basics right, if not nails them. There are no meaningful weaknesses and this is a recipe that’ll never go out of fashion.

As for which model to have, so long as you go for the 2.0-litre engine, it doesn’t matter what bodystyle the chassis wears, although the ‘Retractable Fastback’ RF is particularly handsome in the metal and that much more refined at a cruise. 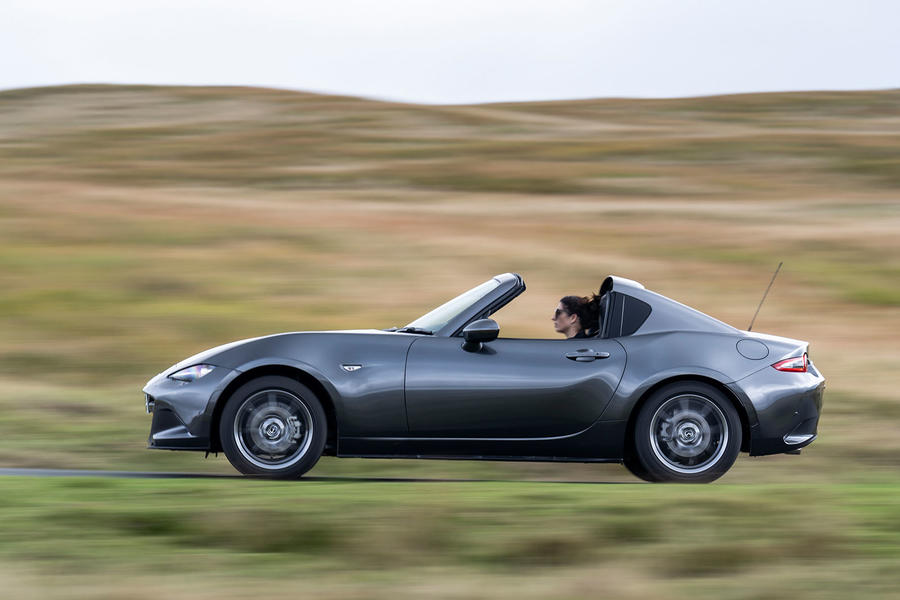 I test drove the MX-5 for the

I test drove the MX-5 for the first time in my life 2 days ago... and, whilst I am a serious type who would never do it even when alone at home, I felt like singing happy songs from after 30 seconds I was driving it — something that never happens to me.I had tested more expensive, more powerful cars that same day... and none had persuaded me to shell out the cash for it and turn my back on my 22-year-old beloved vehicle. But this one... changed everything.

There is one sad "stain" in a joyous picture [note: this refers to Mazda's offer in Italy. It may not be the same in the UK]:Mazda gives you its security technologies suite as an optional only on the 1.5L and 2.0L Sport: you can't buy the "vehicle and pedestrian detecting and auto-braking" feature with the non-Sport 2.0L: I think these astute listings maneuvers, which are legitimate generally, should leave out security equipment, and I didn't expect this from Mazda.

As for the limited-slip differential, it was included in the "additional features of the Sport trim" in the 2018 printed brochure; it is marked as "stock" for both 2.0L trims in the 2019, last updated, listings. Nice one Mazda.

Have I missed something

All the long term/short term tests of this car pointed out the poor refinement and dreadful headroom . Most suggested the regular convertible was the car to go for. I think mazda should have left this as a pure coupe without trying to ram in a folding top , which adds weight and frankly in my opinion looks ungainly , they already make a convertible - totally pointless and ugly . In my opinion of course .....
si73 14 September 2018

All the long term/short term tests of this car pointed out the poor refinement and dreadful headroom . Most suggested the regular convertible was the car to go for. I think mazda should have left this as a pure coupe without trying to ram in a folding top , which adds weight and frankly in my opinion looks ungainly , they already make a convertible - totally pointless and ugly . In my opinion of course .....

I don't think you've missed anything, you're right, all the previous reviews classed the RF as the poor relation to the standard mx5, the hard top didn't bring extra refinement and cost a lot more iirc, but, to my eyes the RF looks stunning and is worth the extra. A moot point though as I can afford neither.

An unbeatable balance of price and desirability IMO.
imfh 9 November 2019

There is a reviewer on

There is a reviewer on YouTube (savagegeese is the channel name) which lifts the cars in a car shop, so as to see the quality of their underside, which of course tells you a lot about how serious a maker is because I don't think doing a good or great job with the underside of a car will ever make a company sell one more car than not doing it.The MX-5 has the quality of some (not all!) cars that cost from 50% up more, even where no-one is going to look before buying it.