From £18,3109
Mazda is celebrating its iconic roadster's 30th with yet another special-edition model, but is it worth the extra?
Open gallery
Close

Here we have another special-edition Mazda MX-5: a car that has been sold in more special editions, over the years, than almost any other. The global tally is already beyond fifty (not all of which were limited-number runs, incidentally), with several – like the one you’re here to read about – built to commemorate a significant anniversary.

Some were built for others reasons, of course; and if you remember the very first to come to the UK in 1991 – the MX-5 Le Mans – you’ll certainly remember the visually arresting paint job it carried in tribute to Mazda's 24-hour race-winner. With the benefit of hindsight, it wasn't unlike what Ronnie Corbett might have looked like on a golf-themed stag do. Let’s just say the 787B carried off the look rather better.

After that, it’s remarkable enough that the special-edition MX-5 survived to a second instalment at all. But it did, and now here we are, more than a million MX-5s and Miatas and some thirty years down the pipe, with another one.

The MX-5 30th Anniversary brings its own lurid colour scheme, which Mazda calls Racing Orange (and, yes, that’s the only colour it comes in) and also lets that colour seep into the special interior treatment, to crop up in accents on the Recaro seats, the dashboard and the decoration on the controls.

The car is otherwise distinguished by specially engraved forged aluminium wheels by Rays that, on the front axle, are wrapped around upgraded Brembo brake calipers painted in the same colour as the body. Discreet 30th Anniversary badging also features on the bodywork.

Mechanically, however, there's little else to separate the car from a normal series-production 2.0-litre Sport model. It gets Mazda's stiffened sport suspension springs, uprated Bilstein dampers and an under-bonnet strut brace. Like all 2.0-litre models, it gets a six-speed manual gearbox and a helical limited-slip differential. But that’s your lot. No light-pressure turbo conversion here. No shortened final drive or racey performance tyre. At least it doesn’t cost a fortune. 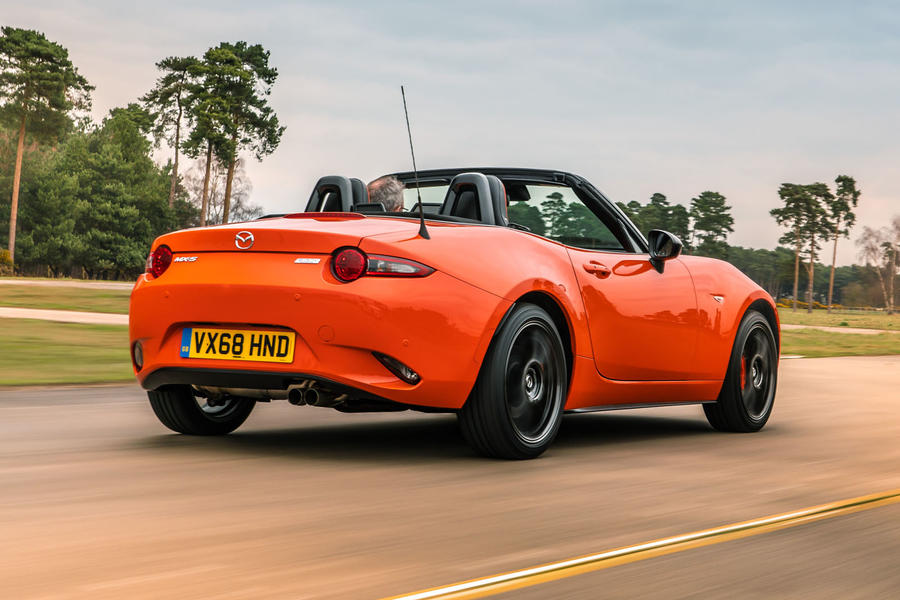 Honestly, it’s a nicely equipped 2.0-litre Mazda MX-5, so it’s great. But it is a shame that Mazda didn’t push the boat out a bit further to really mark such a landmark occasion. And no, I don’t mean with pearl valve caps or something.

The MX-5 has always had a lot of untapped sporting potential, and that’s the reason so many owners choose to have one or two engine and running gear modifications carried out on their cars, liberating a bit of hidden poise and purpose that the next owner doesn’t know about.

Special editions are a way to show a wider audience what might be done, surely? Isn’t it a shame when they’re mostly about a new paint colour? As it happens, there’s a way that you could turn this car into something more like the birthday present it really ought to have been, and you needn’t even leave the Mazda showroom to do it. We’ll come to that.

The fourth-generation MX-5 got a glowing four-and-a-half star road test recommendation from us when it landed in the UK in 2015, proving lighter, purer and more involving than any version since the very first – and it has been improved significantly since then. Last year, Mazda released an updated car with a more powerful and freer-revving 2.0-litre motor and a few choice interior and equipment updates – and it’s these revisions chiefly that make the 30th Anniversary car appeal a little more than some MX-5s have over the years. Really, they’re the reasons that might convince you that now is the time to chop in your older sports car – even if it was the lurid paint that initially caught your eye.

The orange-trimmed Recaro seats are attractive, usefully well bolstered and finished in tactile Alcantara, although this tester found the cushions a touch uncomfortably narrow. There’s Alcantara suede on the gearlever gaiter, too, and on the handbrake, as well as on the dashboard. It certainly adds an upmarket note to an interior that can feel slightly plasticky and unspecial on lower-grade models.

The 2.0-litre motor sounds a bit dull and unsporting at low revs, but it spins sweetly enough, and when it gets beyond 4000rpm, it gives the MX-5 a turn of foot that now feels hot hatch quick through second and third gears. It also spins all the way to 7500rpm now, combining as encouragingly as ever with the car’s beautifully positive and tactile manual gearbox but enlivening that delicately responsive chassis all the more for its extra forcefulness – and so it rewards you vividly every time the road opens up and you can keep your toe in.

The Sport-spec springs and dampers and those Rays forged wheels make for a ride and handling compromise that’s well suited to a compact, lightweight sports car, and that works well on UK country lanes. Even thus equipped, the MX-5 still isn’t the stiffest or the most agile rear-driver on the block. Its chassis retains enough suspension travel to deal fluently with bigger inputs; its grip level is chosen for a progressive breakaway rather than for the utmost outright adhesion; and it has handling that likes to communicate the load building into the tyres with gently gathering body roll, as the driver is made to work a little harder for his kicks than some modern two-seaters might oblige. In all of those respects, the MX-5 driving experience remains an old-school sporting one even in 2019, but it’s still outstandingly involving and likeable.

As for the brake upgrade, you really need a longer and more intensive test than our fairly short blast around the rural lanes of the Midlands to recognize what an upgraded front Brembo can do for this car. But for what it’s worth, the 30th Anniversary has strong-feeling brakes that are well matched to its grip level and easily modulated at road speeds – although the pedal could have been better positioned for the heel-and-toe shifts that you feel obliged to at least attempt as part of such a wonderfully analogue drive. 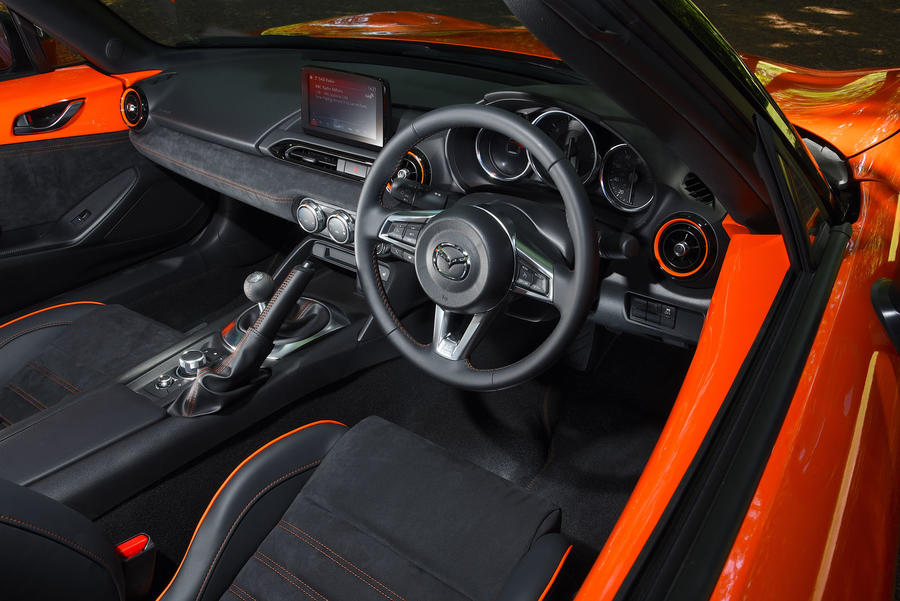 You’re going to be sorry you asked, because the answer’s certainly complicated. If you’ve never owned an MX-5, or if you’ve had so many that you’re totally smitten and just want another spin on the merry-go-round or a slice of the 30th birthday cake action, go ahead. There’s an awful lot to recommend the standard MX-5’s driving experience above and beyond that of almost any other sub-£30k driver’s car that you might compare it with. The Toyota GT86 would give it run for its money for sheer fun factor, but otherwise you’d basically need to be willing to daily a lower-end Caterham to match it for driver involvement.

There are now, however, other options hidden within the Mazda dealer accessories brochure that allow you to configure your own 30th birthday tribute to jinba ittai (just Google it if you don’t know) for less than the cost of this special edition and end up with a car that’s better to drive.

For customers looking to make a few aftermarket tweaks to the specification of their cars, Mazda now offers a few selected, dealer-fit upgrades to the MX-5 that really do make a telling difference to the way it handles and performs. There’s a lightweight BBS 17in alloy wheel that doesn’t look unlike the Rays rim on the 30th Anniversary car; an Eibach suspension lowering kit that drops the chassis 25mm lower to the ground; and a sports exhaust that boosts the car’s audible character to truly sporting levels. You could have the lot on a Sport Nav car, with an otherwise matching spec to the 30th Anniversary edition save for the front brakes, and in a nicer metallic colour, for the same price. In fact, there would be change to spend on 'go-faster' body trim if you so chose.

Mazda had an MX-5 2.0-litre with the dealer-fit lowering kit, the sports exhaust and the BBS wheels squirrelled away in a corner on the 30th Anniversary edition UK press launch, and a test drive proved, rather inconveniently perhaps, that it’s a noticably quicker, freer-revving, more precise and keener-handling prospect than any factory-spec MX-5. There’s a slightly more compelling sense of sporting purpose about it – even if it doesn’t have quite as smooth a low-speed ride as the Sport-spec car. Lowering the MX-5 was always the first thing aftermarket tuners did to it; no surprise, then, that it makes an already engaging chassis even more involving and special.

So, given that all of those dealer accessories are now fully warranted Mazda upgrades, you can guess where my money would go – and it wouldn’t be on that orange paint job. But I’m not a member of the MX-5 fan club; and I gather they like a special edition. It would, of course, be possible to fit the Eibach lowering kit and sports pipes to a 30th Anniversary car; and given special editions hold their value so well, it wouldn’t be an entirely daft way to spend £28,095, either. 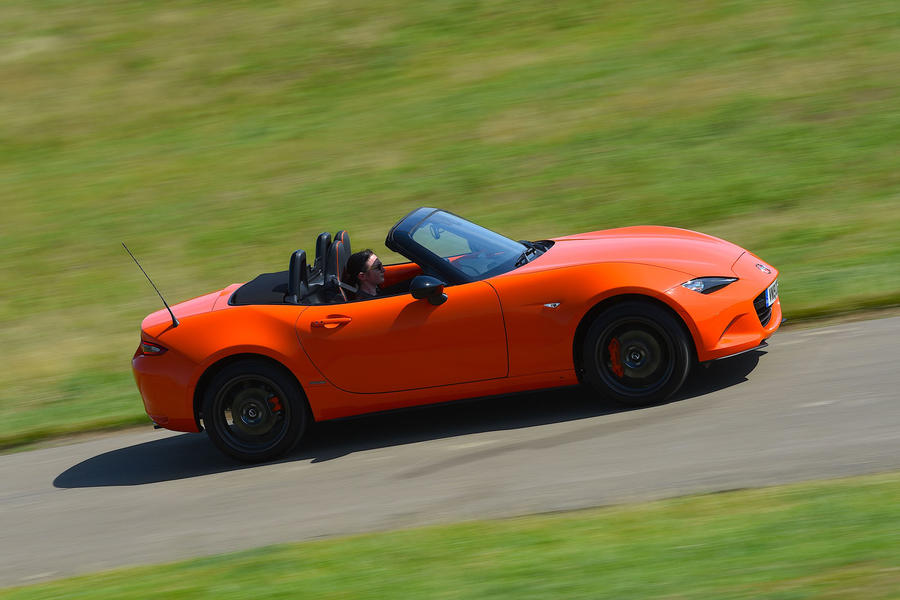 The colour and seats put me off

The colour is a bit too in yer face for me, but as the article says there are lots of other good options. Beware the seats if you’re a bit taller and/or broader than average. They sit a fair bit higher than the standard ones, and the option for a teller person to sit splayed-legged is reduced by the hard, narrow bolsters. At 6’4” I fit fairly comfortably in a standard car but can’t get comfy in this or the old Sport Recaro model

I still think I’ll be making a trip to BBR with a standard Sport Nav when the time finally comes to give up the Mk1.

I quite like the orange paint and black wheels and I'm sure the standard setup is more than adequate for my limited talents, though the sports exhaust may well be tempting for a better soundtrack and freer revving engine. I fancy an RF though purely for its styling.

One day maybe, for now I have my na eunos.

I quite like the orange paint and black wheels and I'm sure the standard setup is more than adequate for my limited talents, though the sports exhaust may well be tempting for a better soundtrack and freer revving engine. I fancy an RF though purely for its styling.

One day maybe, for now I have my na eunos.

I reckon the colour is (literally) brilliant.  Would I want it on a Lexus LS?  Probably not.  But on a tiny, tight roadster, it works so well.  This is one of those cars (in any colour) that looks so much better on the road than on the screen.