You surely know the drill by now when it comes to limited-edition Mazda MX-5s.

Mazda’s iconic two-seater has received so many over the years that we’ve lost count, but that hasn’t stopped them from finding homes. Only so many of each new edition will be made, after all, and although few arrive with any major mechanical modifications, the bespoke colour combinations usually help them stand out from the series-production models.

That’s not entirely the case for the new R-Sport. Yes, it’s a purely cosmetic special, but the polymetal grey paint and matching fabric roof don’t exactly scream "look at me”. Even the 16in Rays forged alloy wheels are on the subtle side. A burgundy leather interior helps elevate things inside the cabin, but otherwise the kit list is all but identical to the more readily available Sport trim.

Instead, limiting production to just 150 cars seems to be Mazda’s way of reminding customers they can have just as much fun with a modest powerplant, because it’s available exclusively with the entry-level 1.5-litre engine.

The four-cylinder motor sends 130bhp exclusively to the rear wheels through a six-speed manual transmission, but in a car that tips the scales at a little over 1100kg, that still translates to a respectable 0-62mph sprint in 8.3sec.

The lighter, rev-happy 1.5-litre has long been our MX-5 engine of choice, even if the car misses out on the limited-slip differential, front strut brace and Bilstein dampers that help give 2.0-litre cars a more focused driving experience. 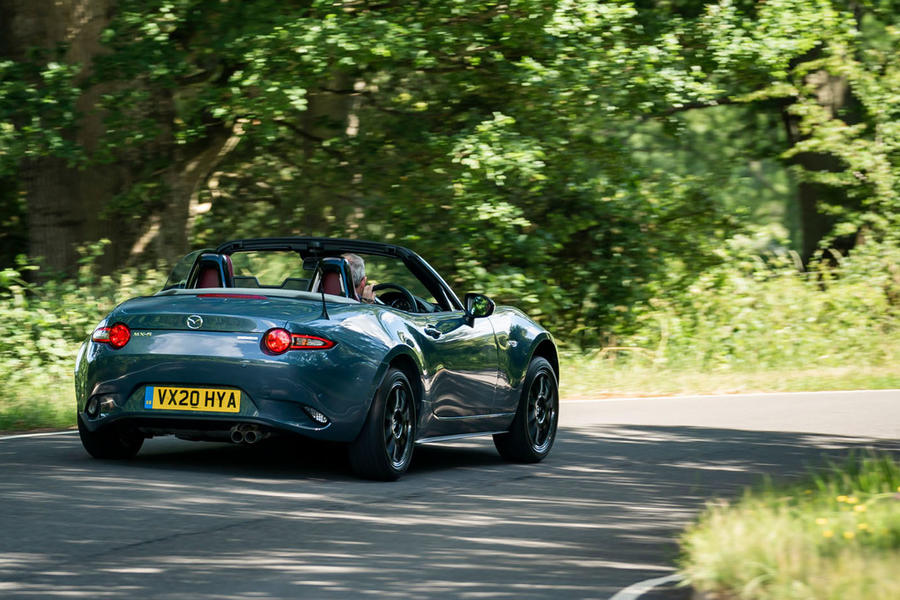 The MX-5 continues to deliver a largely analogue driving experience, courtesy of the naturally aspirated engine that loves to rev. Peak power only arrives at 7000rpm, just shy of the redline, and delivery is entirely linear. It’s fast enough through the gears, although revs are best kept in the latter half of the range for the most responsive reactions to your inputs.

The compact pedal box makes heel-and-toe changes a breeze, and the short, satisfying shift action is among the best you’ll find at this end of the price spectrum. Only Honda’s Civic Type R comes close, and beyond that, you’d need to step up to Lotus and Caterham to find a more satisfying gearchange.

It’s the car’s handling balance and light yet precise steering that make it such fun to hustle through the bends, with plenty of grip even in slightly soggy conditions. You have to work fairly hard to force out moments of oversteer, but when they arrive, they do so predictably and are easily collected again. You’re never short of confidence when pressing on, which makes it that much easier to conserve momentum across even the trickiest of B-roads.

We found a more than respectable roof-up touring economy of around 44mpg, which refused to dip dramatically when pressing on, and the single catch makes manually dropping the roof a matter of seconds, so even the smallest gap in cloud cover is enough to have you reaching for it.

The R-Sport doesn’t add much to the in-car experience other than the red leather upholstery, although recent technology improvements have largely kept it feeling current. The 7.0in touchscreen infotainment screen now plays nicely with both Android and Apple smartphones, cruise control comes as standard, and there’s a comprehensive list of safety aids, including a lane departure warning and autonomous braking. The MX-5’s other usual niggles remain, with barely enough boot space for a couple’s weekend getaway, and an audacious level of wind noise on motorways, even with the roof up. Both factors any would-be roadster owner will have likely considered, of course, and neither truly spoils the experience. 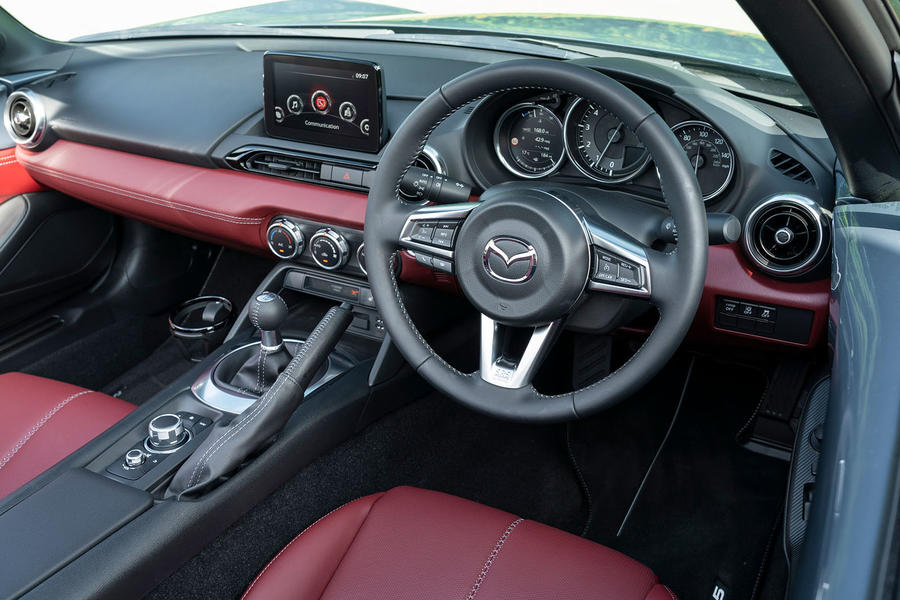 Given the R-Sport does little to mess with the MX-5’s well-established recipe, and it commands only a small premium over the series-production car, it’s the obvious choice while Mazda has any left to sell.

Unlike the larger 2.0-litre, which is approaching modern hot hatch pace with its recent performance hike, the smaller-capacity engine can be used to its fullest at almost every opportunity, while still being quick enough to prove entertaining.

Handling remains among the best you’ll find in any sub-£30k car, even if it lacks some of the 2.0’s focus, so it should be the first choice for anyone more interested in roof-down B-road jaunts than shaving off tenths at an occasional track day. 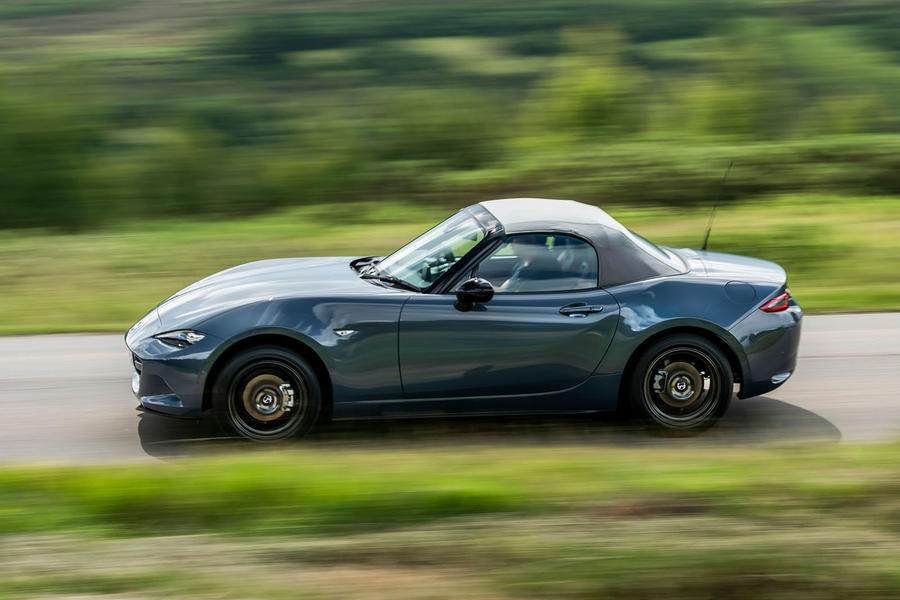 The list of niggles omits the reason I didn't buy one: lack of space.  It's not just the boot.  The cabin is very cramped, passenger room is hemmed in by that bar at knee level, if you deploy the cup holders your elbow hits them every time you change gear, no door pockets, no glove box, no centre console storage, just a stupid little cavity between the occupants' shoulders.  Such a shame because it's otherwise so good.

Totally agree with the above comment about MX-5 lacking colours.

Buying a small, low car in the exact colour of tarmac seems a really bad idea to me.

Why on earth it isn't available in a range of actual colours (ones that aren't white/black/greys) I don't know.    Same goes for most cars now though.

Also to reply to a few comments above - lots of roadtests I've read pick the 1.5 over the 2.0, as offering the most pure, and most MX-5 experience.  If you want something really fast and hard, you're missing the point of every MX-5 ever (and yes I've owned a few).

I too would prefer the

I too would prefer the smaller 1.5 engine over the 2.0 as it seems more in keeping with the mx5 formula, even the 1.5 is far quicker than my na 1.8, however I am sure previous reviews of the nd on Autocar have implied or outright said that the 2.0 is preferable, which is why I commented as such as this review seems contradictory.
As for colours, soul red looks amazing.
gavsmit 11 September 2020

As others have said above, this 1.5 R Sport is showing on Mazda UK's own configurator with a price of £27,700 which is a bit different from the £18,310 shown at the top of this news item (at the time of me writing this) and still thousands lower than the actual cheapest version of the MX5 at £23,800.

All of this makes little difference to me as my own experience of Mazda has been terrible, so I'd never buy one of their overpriced, defective cars anyway.