For a subset of car lovers, BBR GTi will be a familiar name. Performance-chasing owners of the R53 Mini and fans of celebrated Ford rockets such as the Sierra Cosworth will likely know of the place, which now sits in the literal shadow of Mercedes’ Brackley-based Formula 1 HQ. This is an outfit best known, however, for turbocharging a car normally praised for its free-spirited naturally aspirated engine: Mazda’s purer-than-pure MX-5.

BBR sells around 100 MX-5 turbo kits a year, almost half of which end up in America though there have also been recent dispatches to customers in places as far afield as Bahrain and Taiwan. The firm’s dealings with the big-selling Japanese roadster go back to the first-generation car, and the 1.5-litre model tested here represents its latest and arguably most finessed effort yet.

Despite figures that suggest this kit comprehensively remedies the somewhat lacklustre 129bhp shove of the standard car, aside from the natty decals you’d never know it was anything other than a garden-spec 1.5-litre MX-5. We like that. Even if you stood next to it at idle, you’d still be none the wiser.

In fact, it would only be when you attempted to keep this car’s backside in sight along a twisting B-road that the game would be up, because under the bonnet is a neatly installed Stage 1 turbocharger upgrade that yields 210bhp and 197lb ft. With a negligible six-kilogram weight penalty on top of the factory model’s 1050kg, the resulting power-to-weight ratio is roughly what you’d find in an Audi TTS Roadster. 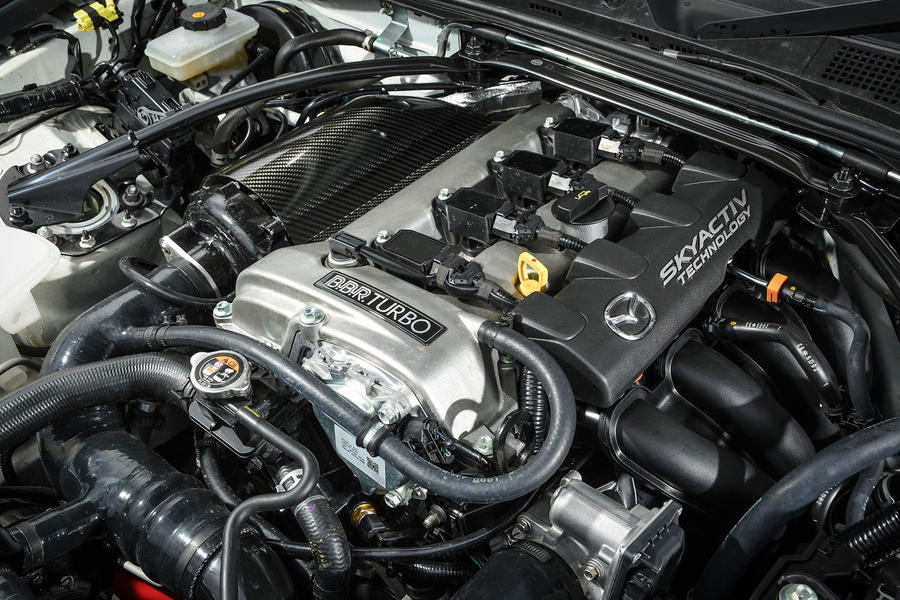 Initially at least, the BBR’s reasonably subtle aesthetic is mirrored in the driving experience, and it’s apparent this conversion is no heavy-handed boost-fest. There’s a gentle coo from the turbocharger atop a slightly industrial four-cylinder rasp and throttle response is dulled very slightly, but otherwise the experience is some way from the tuner fanfare you might expect (BBR GTi can, however, also do that rather well). The clutch is factory-spec, the electronic aids remain unaltered, and there’s nothing inside the cabin to suggest the car has been tickled really quite vigorously.

BBR’s original intention was to develop a naturally aspirated kit for the zingy SkyActiv 1.5, but it found Mazda had developed this powertrain to such a high degree that even substantial modifications made few gains. Remapping the ECU for more power is, of course, largely fruitless unless forced induction is involved and so turbocharging it was. That brought with it not only a need to comprehensively reprogram the car’s ECU, but also complexities owning to the engine’s very high compression ratio and the vast amount of camshaft advance that gives the 1.5 its free-revving character.

On the subject of character: more impressive than the furious rate at which BBR’s MX-5 will go down a road – and its newfound adjustability actually on the throttle as well as off it – is that you’re still rewarded for scaling the upper reaches of the tachometer. Because the turbocharger uses a relatively large and fast-spooling twin-scroll design but operates at low pressure, power delivery feels superbly linear ­– only fuller, and richer – with just a slight bulge of torque at around 3500rpm hinting at the truth. Peak power even arrives at the same 7000rpm as in the standard car, and the potency of the performance makes hitting that mark an all the more amusing experience. However, you may at this point uncover the car’s only real weakness.

It's a small one, mind – essentially the speed at which this MX-5 can cover ground does at times leave the suspension a bit exposed. On less than perfect roads and particularly in the wet, the struggle for vertical control can rob the chassis of purchase. Though the stiffened springs of our test car undoubtedly lessened this generation MX-5’s tendency for exaggerated body roll, they didn’t help the standard Avon tyres find grip. The Bilstein dampers that come as standard on the 2.0-litre MX-5 might have done better, and that car’s limited-slip differential would also have been welcomed given this car’s abundant potential for oversteer. Incidentally, BBR also does a Stage 1 turbo package for the larger-engined car, resulting in 248bhp and a 0-60mph time of five seconds flat. 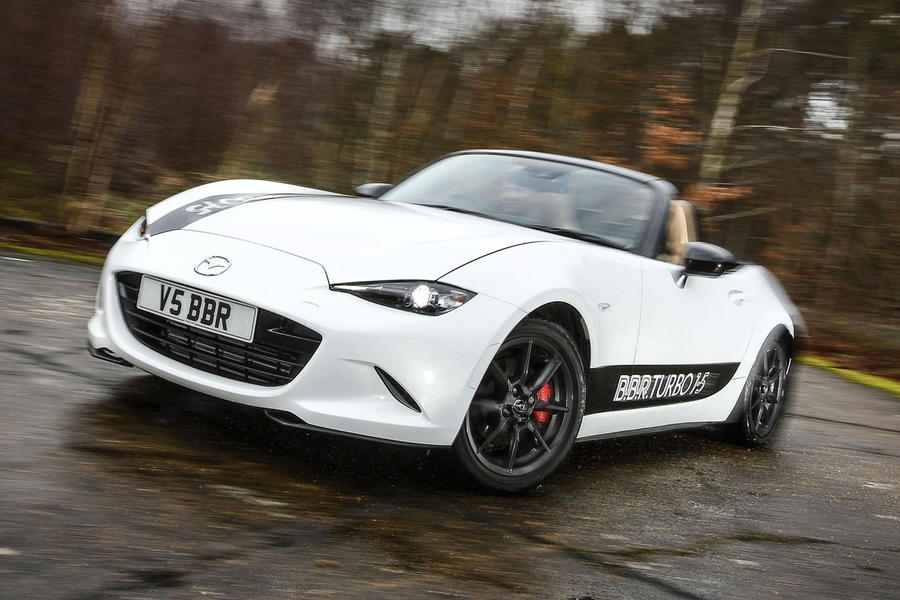 Back to the 1.5 package tasted here – does it have any rivals? At £4995 on top of £18,795 for the basic car, it nicely undercuts the slower Abarth 124 Spider but occupies used 981 Boxster territory. Perhaps it isn’t fair to bring used Porsches into the debate, but there it is. A Subaru BRZ has a more natural balance, less grip and similar pace, but assuming you’re after a drop-top, it’s off the menu. Simply, for this money you’ll struggle to go faster and have more fun in prettier car that you can still buy from new.

Those who would like to keep their factory warranty in one piece – and we suspect that might be most, despite the fact BBR offer its own three-year warranty – understandably won’t be keen. But for existing MX-5 owners who are perhaps more adventurous, a turbo conversion as astonishingly tacit in its execution but so vividly effective as this Stage 1 BBR GTI package must be a sorely tempting prospect. Without doubt, this is a very good car made better. 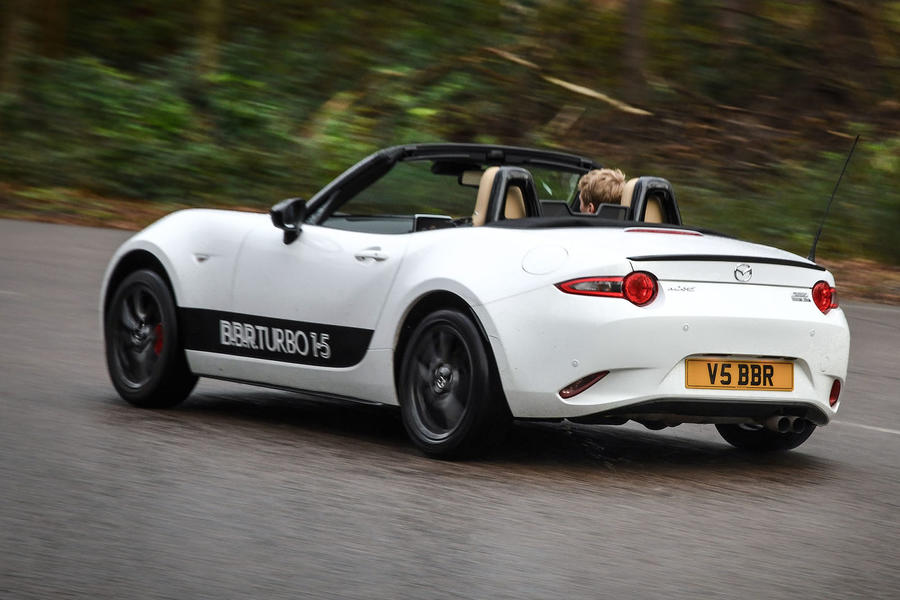 Is this legal in UK?

That is the crucial question. Where I live, Amy chance that affects power or outside measurements means that the car does not match the specs in the registration documents so the car becomes totally illegal as if you were driving on the public road on something you randomly put together in a shed. Surely if you review (subtly advertise?) Tuned cars like this and the s3, then you should mention the procedure to make it legal (if applicable).
View all comments (8)