Call it delusion or perhaps sheer lunacy, but the British response to the beginning of summer is without question one of unbridled optimism. Just a few days of sunshine has us pulling out the barbecue, heading to the nearest beach, and, if official sales figures are to be believed, buying a convertible - such as the Mazda MX-5.

That’s right. Despite the UK suffering from notoriously unreliable weather, when it comes to European sales of convertibles, we come second only to Germany. And yet, despite our errant hardiness, there are still those who apparently crave a small sports car but doesn't quite commit them to full soft-top living. This is a point backed up by the previous generation MX-5, 80% of which were sold with a folding hard-top.

It’s hardly surprising then, that a year after the launch of the fourth-generation soft-top, the new Mazda MX-5 RF, which stands for Retractable Fastback (or hard-top to you and me) is going on sale. With a three-part roof made from steel, aluminium and plastic, the RF promises less wind noise than the regular car, a cleaner Porsche 911 Targa-esque look, and a hands-free electrically folding roof mechanism – say goodbye to contorting your body into an unnatural position to lock the roof into place.

And yet there is a downside to all of this: weight. Those sexy buttresses, glass rear window and roof-folding mechanism only serve to add more weight higher up in the body. In fact, all-in, a 2.0-litre-engined RF weighs 45kg more than the equivalent soft-top. Not ideal in a car praised for its low-weight ethos.

Therefore, to counteract any unwanted dynamic effects, Mazda has beefed up the front anti-roll bar, tweaked the damper settings and sharpened up the steering, all to ensure that the RF drives as similarly to its sibling as possible. And on the table-smooth roads of Spain, it did. But if there’s ever a real litmus test for chassis tuning, it’s bumpy British B-roads. 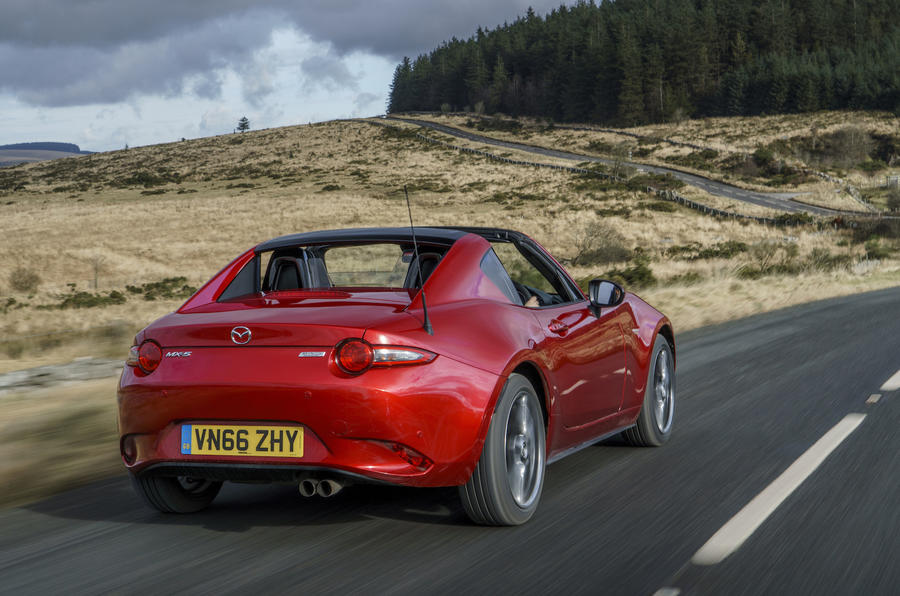 This side of a Lotus Elise or Porsche Cayman, there is nothing currently on sale that offers the same level of poise, delicacy and balance of the standard Mazda MX-5, but it’s not perfect. Turn into a quick corner at speed, and the fabric-roofed MX-5 pitches over heavily on its springs, before finally settling down and regaining composure. It’s not a flaw as such, and some even like that you can feel the mass of the car shifting around, but we’ve always felt that a stiffer set of springs would go a long way to turning the standard car into an even more invigorating driver's car.

This is something that the RF, rather surprisingly, goes some way to achieving. Its tweaked dampers and stiffened anti-roll bar not only help to compensate for the extra mass up top, but they also give the car a more planted stance compared with its soft-top sister. In fact, combined with slightly quicker steering, we found the tighter RF fractionally more confidence inspiring on the tight and technical roads of Dartmoor.

And the handling isn’t the only thing that is surprising. Drop a few cogs using the snickety six-speed manual gearbox, get the throaty 2.0-litre engine singing, and the RF doesn’t feel noticeably slower than the regular car, either. In fact, the RF can complete the run from 0-62mph in just 7.4sec – just 0.1sec slower than the regular MX-5, and 0.2sec quicker than its main rival, the Toyota GT86. 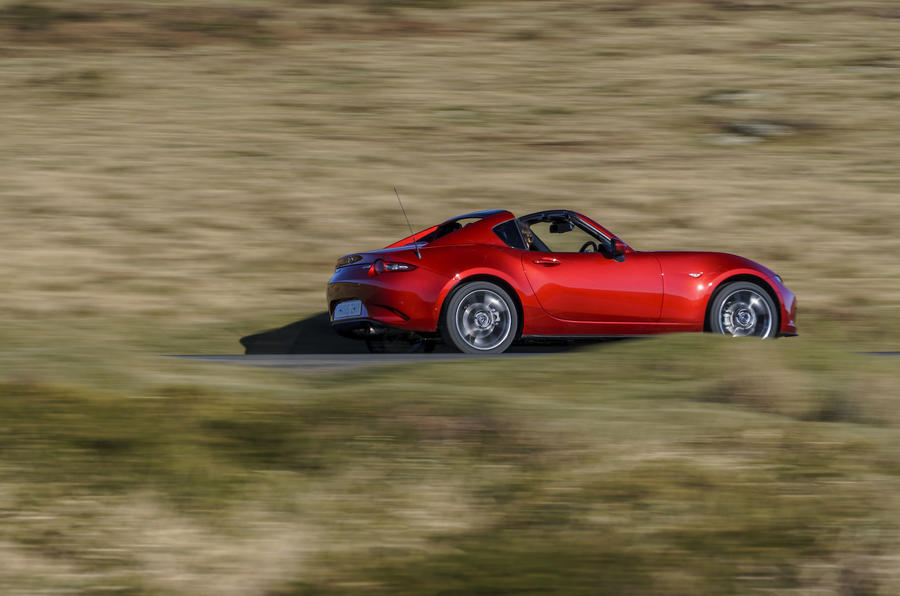 But is it as refined as a hard-top should be? Well, it depends how you use it. When cruising down sweeping county roads and teetering through quaint villages, the RF makes a great deal of sense; open-top thrills on the weekend, with the backup of a hard-top during the week. However, leave the top down when pressing on (which you probably will because the roof can only be folded away while you're driving at less than 6mph), and the RF reveals its biggest weakness: wind noise.

Beyond 50mph the drone behind your head, caused by the wind being trapped and then circulated loudly around those flying buttresses is loud enough to curtail any conversation you were having with your passenger. And with the roof up, things don’t get much better, with noticeable buffeting around the seal between the roof and side windows. So, rather confusingly, the MX-5 that was designed to offering greater perceived security and better refinement, struggles most noticeably in that area. 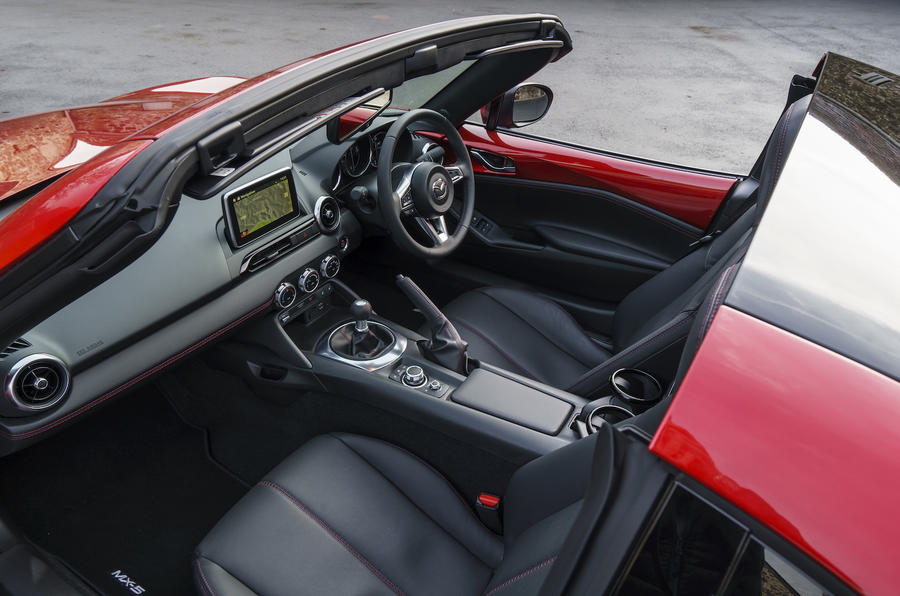 The MX-5 RF is as pleasantly surprising as it is confusing. With revised suspension and fractionally sharper steering, the heavier and allegedly more civilised MX-5 feels that little bit better sorted than the roadster. And yet it struggles to achieve the main objective it set out for itself; namely to offer better refinement over the standard car.

But that’s not to say it’s flawed. Far from it. That clever roof takes up virtually no extra boot space, those gorgeous flying buttresses shout out that this is the more expensive model, and the 2.0-litre drivetrain is still exceptionally engaging. It’s just a shame that for your extra £2000, you don’t quite get the all-rounder that Mazda promised.

Surely one of the reasons the

Surely one of the reasons the hard top version of the previous model sold so well was that it looked identical to the soft top with the roof down. ie the full convertible experience. And what are those silly black plastic panels adjoining the side windows?
poon 8 February 2017

I was considering one of these but the emissions and insurance group are too high. Have ended up ordering a new Mini Cooper for the March registration. Virtually the same 0-62 and top speed as well.
Roc R 8 February 2017

You bought the Mini with the consideration of 0-62 and top speed? Think you missed the point of the MX-5.

You bought the Mini with the consideration of 0-62 and top speed? Think you missed the point of the MX-5.

I think you missed the point Roc R. What he said was that it ALSO had similar 0-62/top speed. It wasn't the reason for buying it.

If I had to choose between the Mini and this I'd go for the former any day of the week.Far better all-round proposition.

Would i buy one?