The Mazda 6 has undergone the third and most far-reaching facelift since the attractive mid-size saloon went on sale six years ago.

Not that the Mazda 6 shouts particularly loudly about it. The mesh of the grille sits a touch deeper, its chrome surround now extends outwards to underline revised LED headlights and the lower front bumper has been re-profiled, but overall Mazda has resisted tampering too eagerly with the car’s gracefully ageing features. Safer to make more subtle changes such as mounting the wide-bore exhaust tips a fraction further apart for more ‘stance’.

Under the bonnet things are different, because this updated 6 marks the debut of Mazda’s direct-injection 2.5-litre SkyActiv-G engine. It’s making an appearance because the company anticipates – naturally – a slight shift in its sales composition from diesel to petrol, and wants to offer buyers greater choice.

The new engine is naturally aspirated and already serves diesel-averse Americans who own the mammoth CX-9 SUV and its smaller sibling, the CX-5. With 191bhp it’s the most powerful engine to feature in a UK-spec 6, but also features cylinder deactivation, operating just two of its four combustion chambers under light throttle loads. Combined fuel economy is duly rated at 42.2mpg on the new WLTP cycle.

This range-topping 2.5 is joined by subtly revised versions of the existing 2.0-litre SkyActiv-G engines – of 143bhp and 163bhp – and is mated solely to Mazda’s six-speed auto gearbox, which uses paddle-shifters mounted on the back of a thin-rimmed steering wheel. 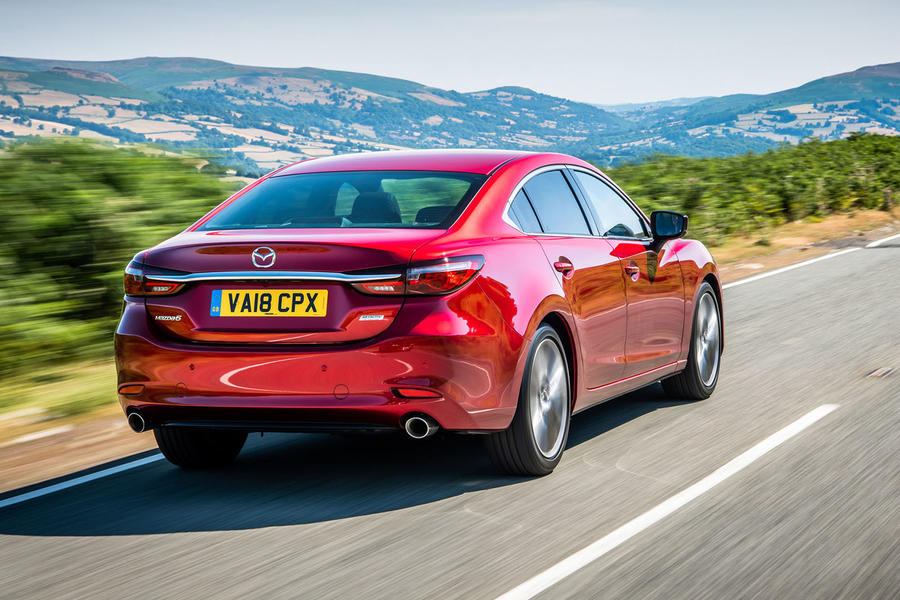 Inside it’s surprisingly plush. The 2.5 is available only in a new trim level known as GT Sport Nav+, which adds a 7in TFT screen to the instrument binnacle, Nappa leather for the seats and wood trim apparently ‘modelled on the pillars of ancient Japanese temples’. Mazda has also tried to exaggerate the width of the cabin, not least by extending the air vents into the door trim and making the ventilation panel wider and slimmer. No longer does it feel as though you’re stepping into a lowered CX-5.

The operation of the electric seats is still offensively loud, mind, and the infotainment system still asks you to wade through clunky menus, even if the resolution of the screen is now acceptably sharp. You might expect a company known for its engaging sports car to position the driver more comfortably, too. For taller drivers there’s neither enough reach-adjustment in the telescopic steering column nor scope to set the lightly bolstered seats satisfactorily low. The driving ergonomics are otherwise straightforward and the cabin uncluttered.

On the outside, GT Sport Nav+ models get 19in alloys with a 'ghost-chrome' finish – a similar treatment is applied to the grille – and gloss-black rear bumper trim. You might also go for the Soul Red Crystal paint of our test subject, which Mazda claims is now brighter and applied more deeply than before. It costs £800 but it looks superb.

There are reasons why you might want your petrol-powered Mazda 6 to tout more than just the 163bhp offered by the most powerful 2.0 unit, not least because this excellent chassis deserves it. The front-driven 6 has always exhibited nimbleness, changing direction easily and neatly with steering that’s unusually delicate, direct and feelsome by the standards of the class. In fact it can be difficult not to start judging it against more illustrious machinery such as the BMW 3 Series, rather than its natural rivals such as Ford’s Mondeo and the VW Passat.

Mazda has nevertheless made alterations to the car’s MacPherson strut front suspension and multi-link rear, both of which continue to use passive dampers. To achieve more linear steering, the front steering knuckles have been lowered, while the mount of the lower arm is raised, and the steering is now rigidly mounted to better transfer those minute mid-corner corrections we’re constantly making.

The manner in which the anti-roll bars are attached has also been adapted to help smooth suspension travel. The dampers have increased in diameter, to improve ride comfort, and the rear top mounts are now made of urethane to further improve the damping characteristics.

There are more changes – too many to list here – but the upshot is the 6’s likeable dynamics remain. The steering is enjoyably direct, the car’s nose keen to tilt into bends with a generous but orderly measure of roll. You’re invited not to grab this chassis by the scruff but to flow it through direction changes. Too much pace and it’s the vertical control that gives up first, the body beginning bob out of time with the contours of the road, but by that point you’re likely asking too much of a front-driven executive saloon. Overall it’s a competent, characterful steer.

Mazda has also made improvements to sound insulation and in terms of tyre-roar and engine noise the 6 is impressively muted at a cruise. There seems, alas, more wind noise than before, although this could well be because it’s now that much more apparent.

This atmospheric 2.5-litre engine requires more commitment than drivers of torque-rich turbodiesels will be accustomed to – no surprise there. Peak torque arrives only at 4000rpm, with 191bhp arriving at 6000rpm, and so brisk progress isn’t simply ‘on tap’. However, whereas those turbodiesels become downright lifeless at high revs and its 2.0 range-mate is eventually neutered by the car’s tonne-and-a-half mass, the 2.5 never feels less than respectably quick, with Sport driving mode further honing an already sharp response to throttle inputs.

Along flowing Cotswold A-roads interrupted by 30mph speed limits through villages, the 2.5 manages around 37mpg, whereas the more powerful of the 2.0-litre 6 variants, which we also tested briefly, manages nigh-on 50mpg. Whether that’s an acceptable trade-off between power and economy is up to you.

It’s a shame Mazda doesn’t offer the 2.5 with the six-speed manual. There’s little wrong with the shift quality of the automatic, but the light, precise action of the manual option will be missed. Moreover, the clutch action is conveniently devoid of heft – as befits an everyday kind of car – and yet the brake and throttle pedals are thoughtfully placed for rev-matching during downshifts. Hardly the stuff of class-leading sales, but to us it’s the sort of thing that makes the ownership experience that much more satisfying. 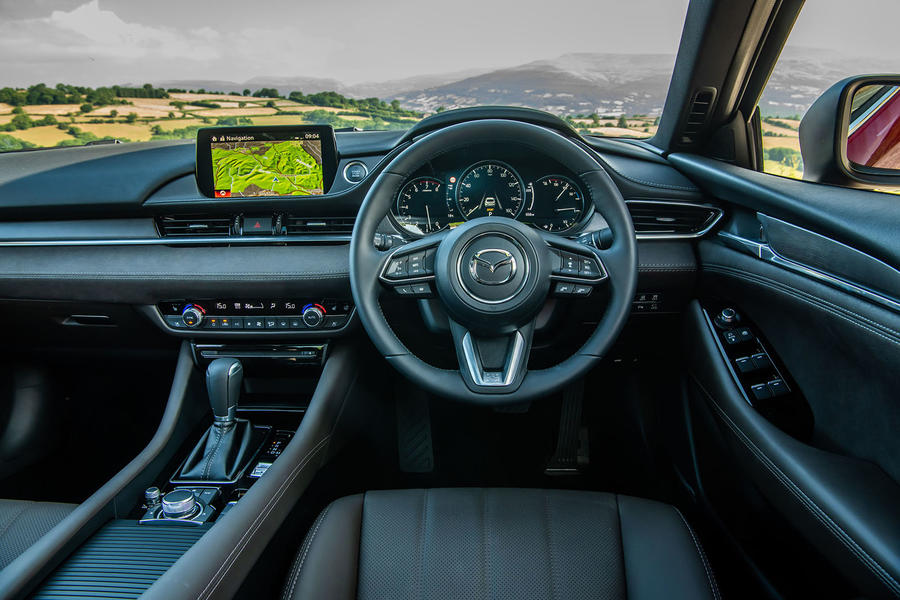 If you care about driving and your reasonably priced saloon must sup unleaded petrol, the Mazda6 makes a strong case for itself. For a front-driver it’s not only unusually satisfying but satisfying full stop.

We have our doubts about this 2.5-litre engine, however. It doesn’t spin out quite as sweetly as the 2.0, and when it does the additional thrust comes at a disproportionate cost to fuel consumption. With the top-spec 6 you’re also obliged to have to the six-speed automatic gearbox, which seems a shame when the manual alternative is so good to use. To us, the sweet-spot would be a manual 2.0-litre car with around 180bhp, but unfortunately that doesn’t exist.

The 6 is therefore a 3.5-star car in the range-topping guise tested here but worthy of four stars if you go for the more powerful 2.0-litre variant in a high specification. The interior feels more sumptuous than ever and the standard specification is generous. It’s a smart, comfortable, spacious saloon (or estate) that stands out among staid rivals both for its design and handling. 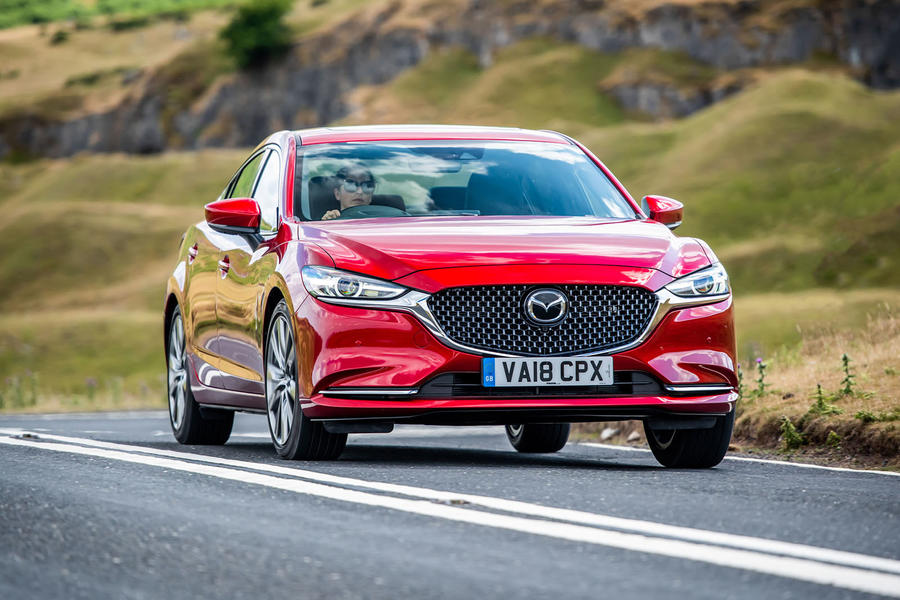 but NOT fair I'm not one for stars but 3.5???  The ride sounds great so why would the loud'ish electric seats be worth a mention when I'd be surprized if a German 30k competitors even had them as standard.

I'd agree with 'why not available with manual' and 'consumption' negatives but to a private buyer than might only be a couple of hundred quid extra a year over the lower powered 2.0.

If this car was a VW, Audi, Skoda or possibly even a Vauxhall, the star rating would have been at least 4, if not 4 1/2.  I often feel that Autocar has a bit of a downer on Mazdas, most notably the 3.  This is a classy car that has been thoroughly, thoughtfully and skilfully updated over its lifecycle and so has matured into a credible alternative to the Germans.  In my view, this is to be celebrated, not underplayed.

Why only 3.5 stars ? Read the article, it clearly says and it also says the more powerful 2 litre warrants 4 stars. Autocar may be Geramn baised at times, but theyre not here.

Seems it's been around longer that it has

With this now being the 4 version of the current 3rd generation model, it feels like this Mazda 6 has been around for much longer than the actual 6 years. Still, it looks great and shows that non-premium cars in this class from Japan can do well in the UK at least following the demise of the Primera, Galant, Accord, Avensis and Legacy. And I agree with some of the comments that this car deserves more than 3.5 stars which shows just how good the car was when it was first launched in 2012.

The Avensis,  which outsold the 6 (25k v 23k sold in the whole of Europe in 2017), is going because the sales for that sector have collapsed to the point of being uneconomic & it wasn't worth investing in a new model (which is also why the T27 lasted for 9 years instead of the usual Toyota model's 6-7). Looks like Mazda are aiming to make this soldier on to 9 too ...

For all you gain with the larger Motor(19bhp) and for a 2.5lt it ain’t that quick, a 2lt Petrol BMW 3 series will take a second out of that and better the mpg by 5 miles more too, along with the what seems to me an out of proportion body design, it’s a sort of half baked Car so to speak.

a 320 tourer specced to this level is 7k more cos I did this before ordering the Mazda. 5 mpg not really a factor in context

Still would get the 2.0 diesel. It also after discount far cheaper than the CX5...